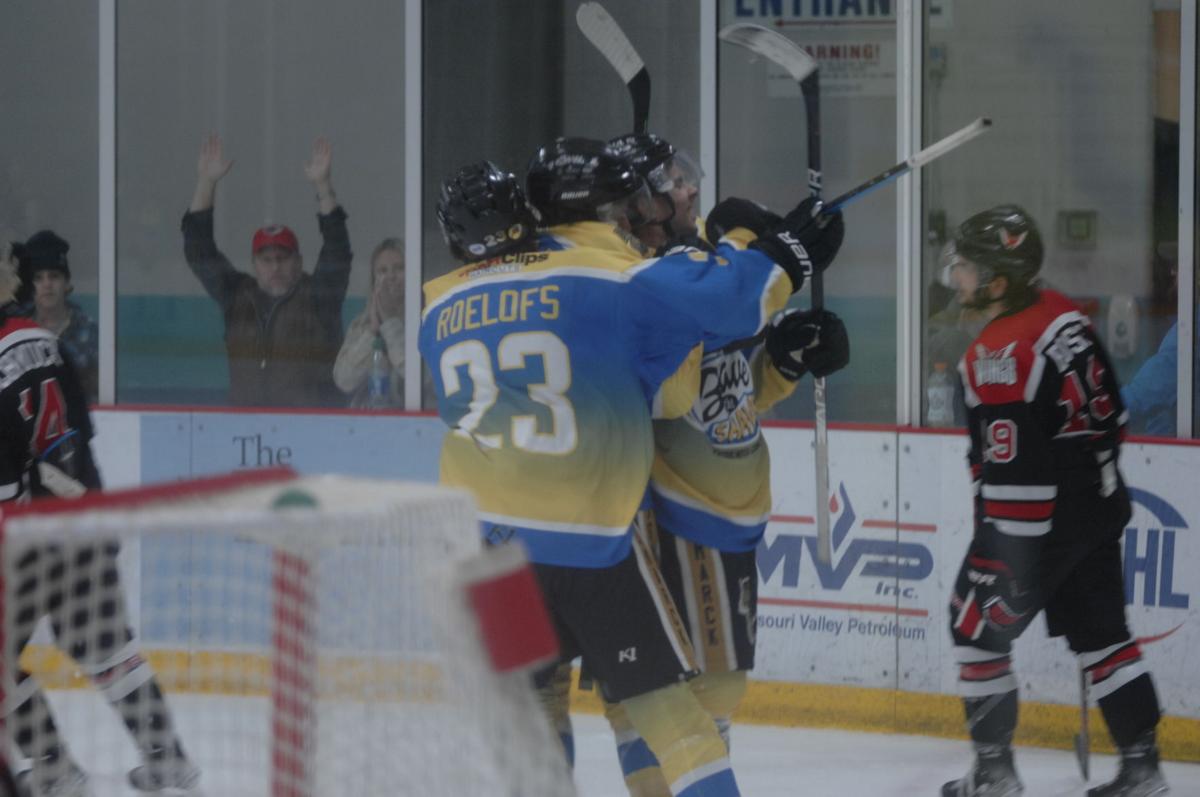 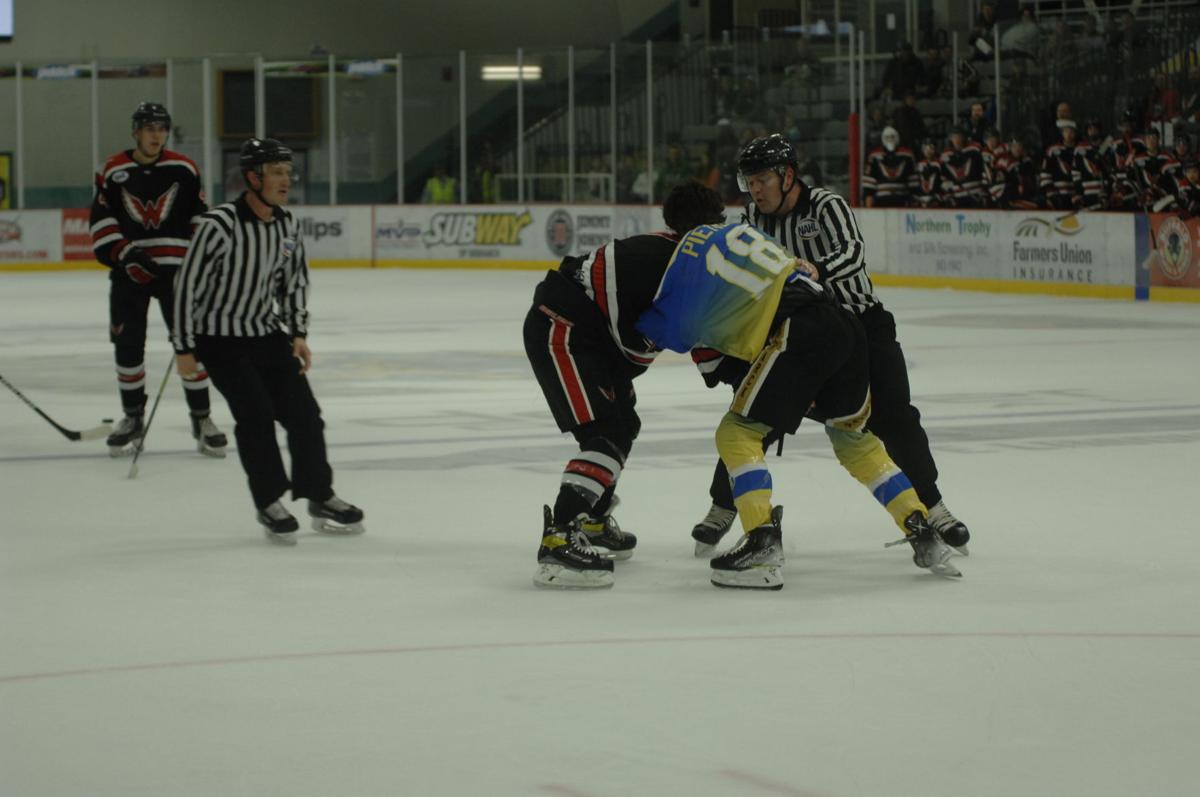 Nate Mann of Aberdeen, left and Adam Pietila of Bismarck mix it up after the second period of Saturday's game at VFW Sports Center.

It's been a season of changes for the Bismarck Bobcats.

The North American Hockey League team is back to playing in front of fans, while also breaking in a largely new roster following back-to-back strong seasons.

"Having fans in the stands makes sports what they are, makes sports special," Bobcats head coach and general manager Layne Sedevie said. "We've had such great fan support for years. It makes the experience here a special one. Last year was a tough year for everybody."

Sedevie thinks that despite his team winning just two of its first 10 games, they're a group that can grow together and improve.

"The last few weekends we've gotten a couple of points and played well on one night," Sedevie said. "Hopefully we get that consistency going forward so we can start getting four points on the weekend.

"We've dug ourselves a bit of a hole so we need to start finding it."

The Bobcats haven't stood pat on their slow start. Even after the offseason full of changes to a once-familiar roster, they've made a number of moves, including adding forwards Owen Michaels, Isaac Novak, and Ryan Taylor after the calendar turned to October.

Bismarck's many newcomers have had to rely on the 12 players who spent time on the roster last year to get acclimated, including forwards Quinn Rudrud and Owen Michaels, along with defensemen Christian Miller and Luke Roelofs.

"Quinn Rudrud is a veteran guy who came back this year that is starting to get into his groove," Sedevie said. "Obviously Owen Michaels, we got him back, he was a mainstay for us last year."

Novak has nothing but good things to say about how his teammates accepted him.

"The transition has been great, and these guys are my brothers," he said. "We've come together as a group and I wouldn't have it any other way. Bismarck is a great community and I love being here. Going through the big cat is like nothing else."

The Bobcats have had four goalies see action so far. After trading Tommy Aitken to Kenai River, they've now turned to rookies Aksel Reid and Erik Forss to backstop their defense.

"We've taken some lumps early on," Sedevie said. "We have something like 17 rookies this year, which is a tough number but you have to take baby steps and that's something we're trying to do."

Their offense has been hit and miss so far, while the defense also has struggled with consistency. The Bobcats have allowed four or more goals seven times.

Sedevie doesn't think either of the Bobcats' special teams are where they need to be, with the power play scoring on just four of its first 33 opportunities, while the penalty kill has allowed eight goals so far.

"Our penalty kill has been getting better, even though we gave up a goal [Friday night]," Sedevie said. "The power play's not where it needs to be, and we'll be working on both of them this week."

There is some good momentum that appears to building for the Bobcats on the power play, and with additional work, some of the tough shots that goalies are fending off now might start finding their way into the net.

"We just need to settle down the puck and use our systems that we've worked out," Novak said. "We have to break in the right way and keep working on stuff."

"(Friday night), we got outshot, we didn't play very well at times, we played okay at times, but definitely not the way we played (Saturday night)," Sedevie said. "We changed a few things and I'm proud of the guys. It's been a tough start, so the guys are excited and it's well-deserved. We have to find some consistency with such a young and new group here."

Now the trick is putting it all together. With second-place Austin, third-place St. Cloud and first-place North Iowa representing their next six games, the Bobcats will have every opportunity to prove that their slow start is a thing of the past.

"We've been working week in and week out to get better as a group," Novak said. "We have a lot of new guys so it's going to be a progress thing. We're confident we'll keep improving as a team."

Nate Mann of Aberdeen, left and Adam Pietila of Bismarck mix it up after the second period of Saturday's game at VFW Sports Center.