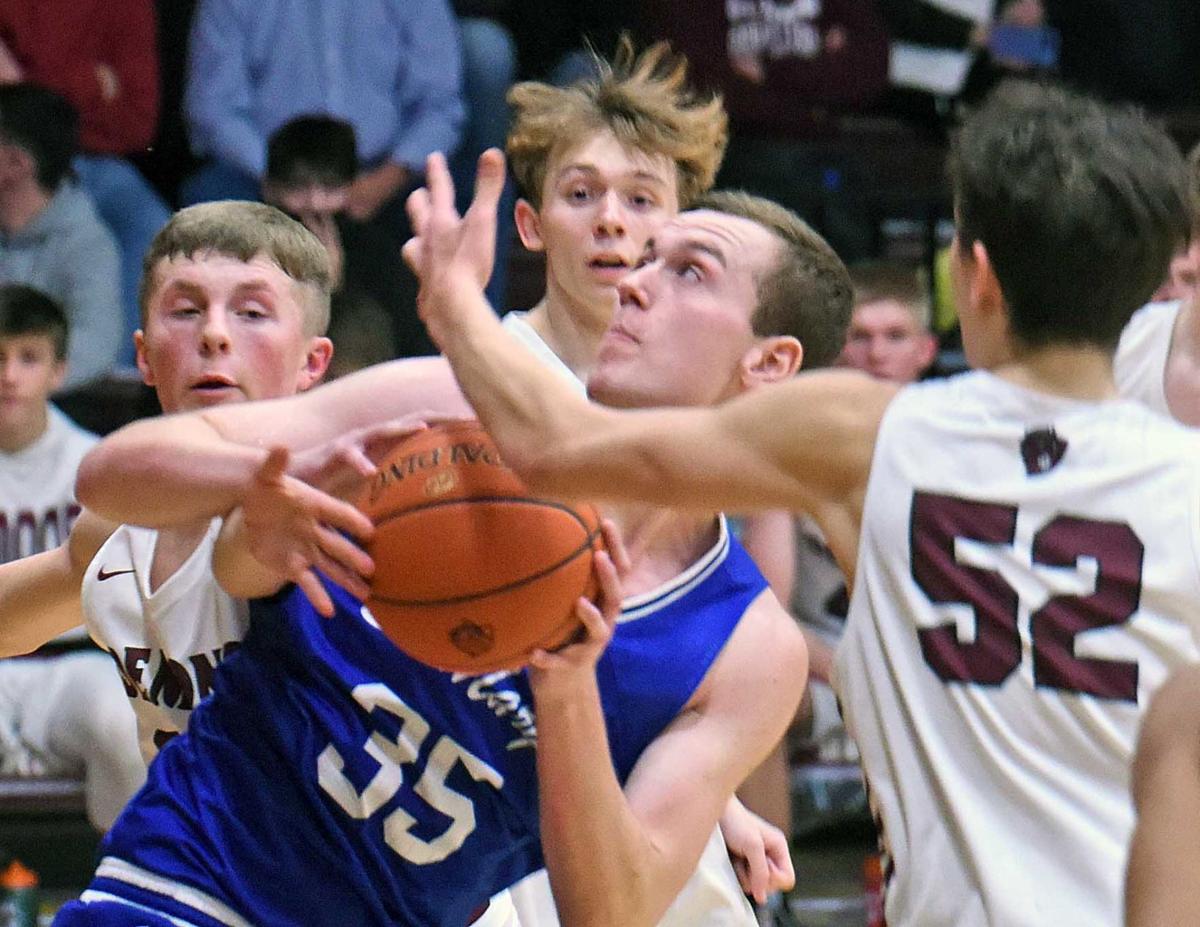 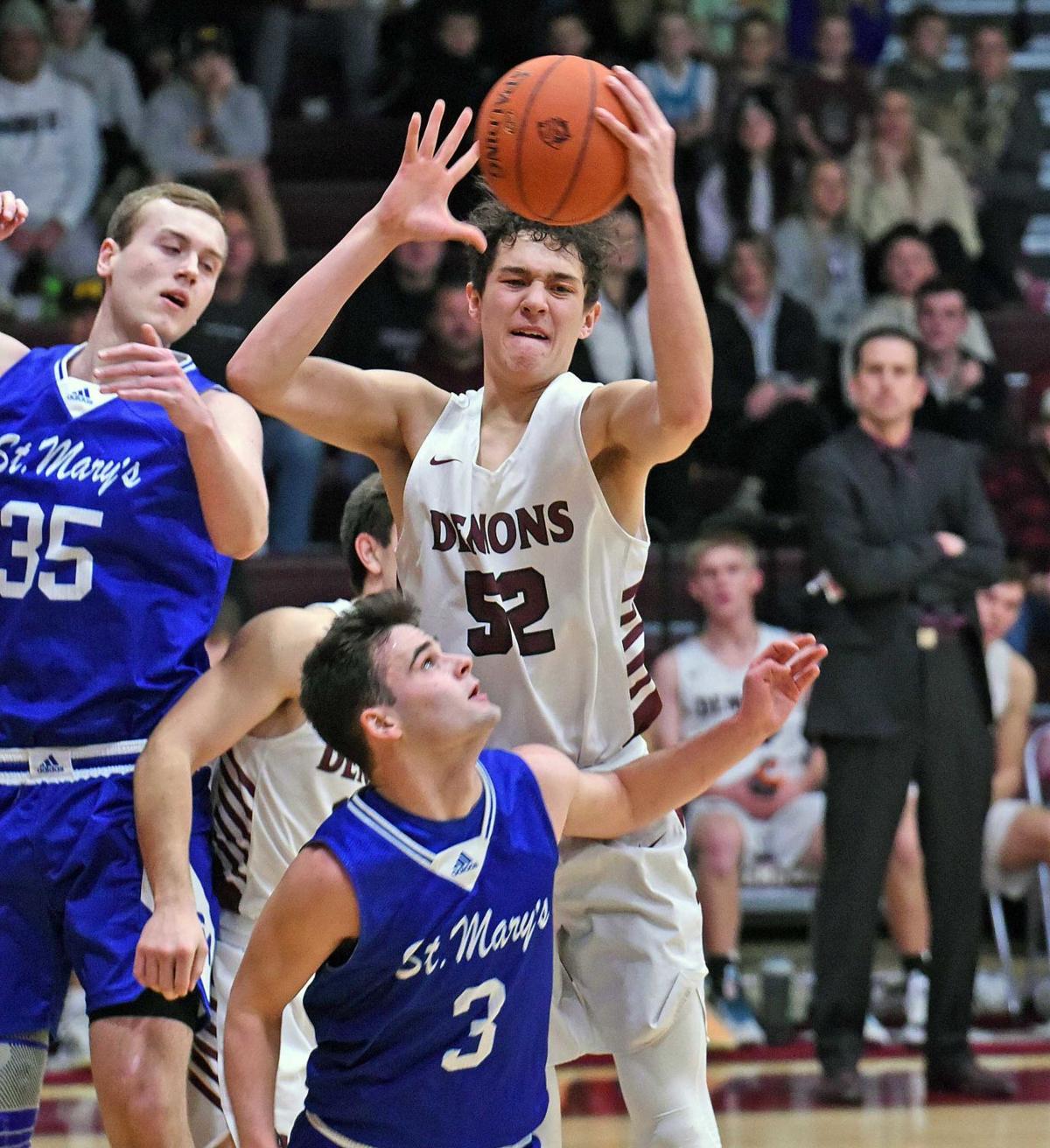 Eaglestaff, already with 27 points, injured his left ankle with more than 15 minutes left in the game and did not return. Up to that point, the Demons had led by double figures for most of the game.

"Me and my dad always practice free throws. He always tells me ‘you gotta make em,’ so I kinda of just went back to that," Gillette said. "In that spot, you know, being a senior, you just feel like you gotta step up and knock them down. Thankfully, they went in."

Stotz added 19 points for the Demons, who had 11 players score in all.

"George and Ethan are returning players for us. They've played big minutes and we had high expectations for both of those guys coming into the season," Bismarck coach Jordan Wilhelm. "When you're in a situation like we were tonight, when Treysen goes down, you look to your seniors and those two guys really came through for us. Not surprised, though. George and Ethan are really good basketball players.”

Earlier in the season, the Demons had to win in Jamestown after Eaglestaff had fouled out in overtime. They came through again against a quality St. Mary's squad.

"Treysen, obviously he's our leader. A lot of what we do goes through him. He's a great, great player, but we were in a similar situation in Jamestown and found a way to get the win," Gillette said. "Tonight, this was different with him getting hurt, but you still have to have confidence in each other and keep competing. I'm proud of how we competed, how we kept fighting against a really good team."

The Saints (4-2) appeared poised to get out of Karlgaard Gym with a win when Evan Gross drove the length of the floor and scored at the rim to put the Saints up 95-91 with 3:05 to go.

But sophomore Preston Lemar's putback bucket, off a free throw miss by Gillette, gave the Demons the lead back at 96-95.

Sam Schmidt coolly sank three straight free throws after hitting fouled on a 3-point attempt. Stotz had the answer, scoring four straight points -- two free throws and a nifty left-hander inside, to give the Demons the lead for good at 101-98.

"Ethan was huge. His scoring and rebounding, wow," Gillette said. "That's what he does."

Garrett Bader poured in 31 points for the Saints, including five 3-pointers, in a stellar performance by the senior guard.

The Saints also got 22 points from Gross and 15 from Nathan Fedorchak. However, the Saints left points on the floor, missing 12 free throws.

"St. Mary's is a very good basketball team and we knew that coming in," Wilhelm said. "They're a team that's certainly going to be there in the end."

That, in the end, made the win even more significant with Eaglestaff, averaging 32.5 points per game, sidelined for nearly the entire second half.

"Treysen is such a huge part of what you do, when he goes down, it does take a minute to kind of process that and kind of reset," Wilhelm said. "But that's sports. Unfortunately, injuries happen, but just really proud of how our guys responded. They showed tremendous resiliency."

With Gillette leading the way.

"You never want to see your teammate get hurt, your friend, but we just had to keep playing," having a strong season himself at nearly 17 points per game. "Adversity is going to happen. It did tonight, but it feels good we were able to come together and get the win."