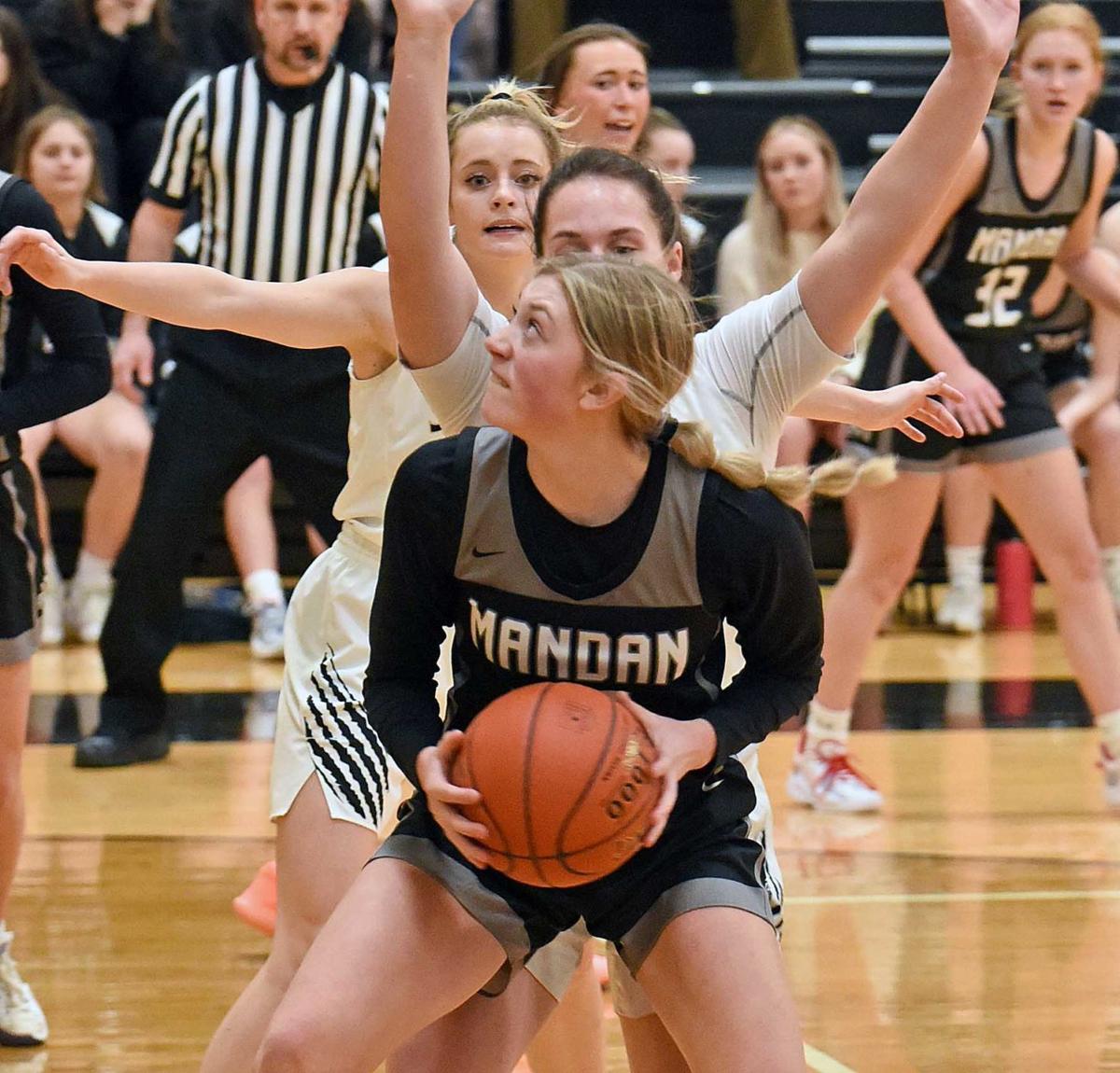 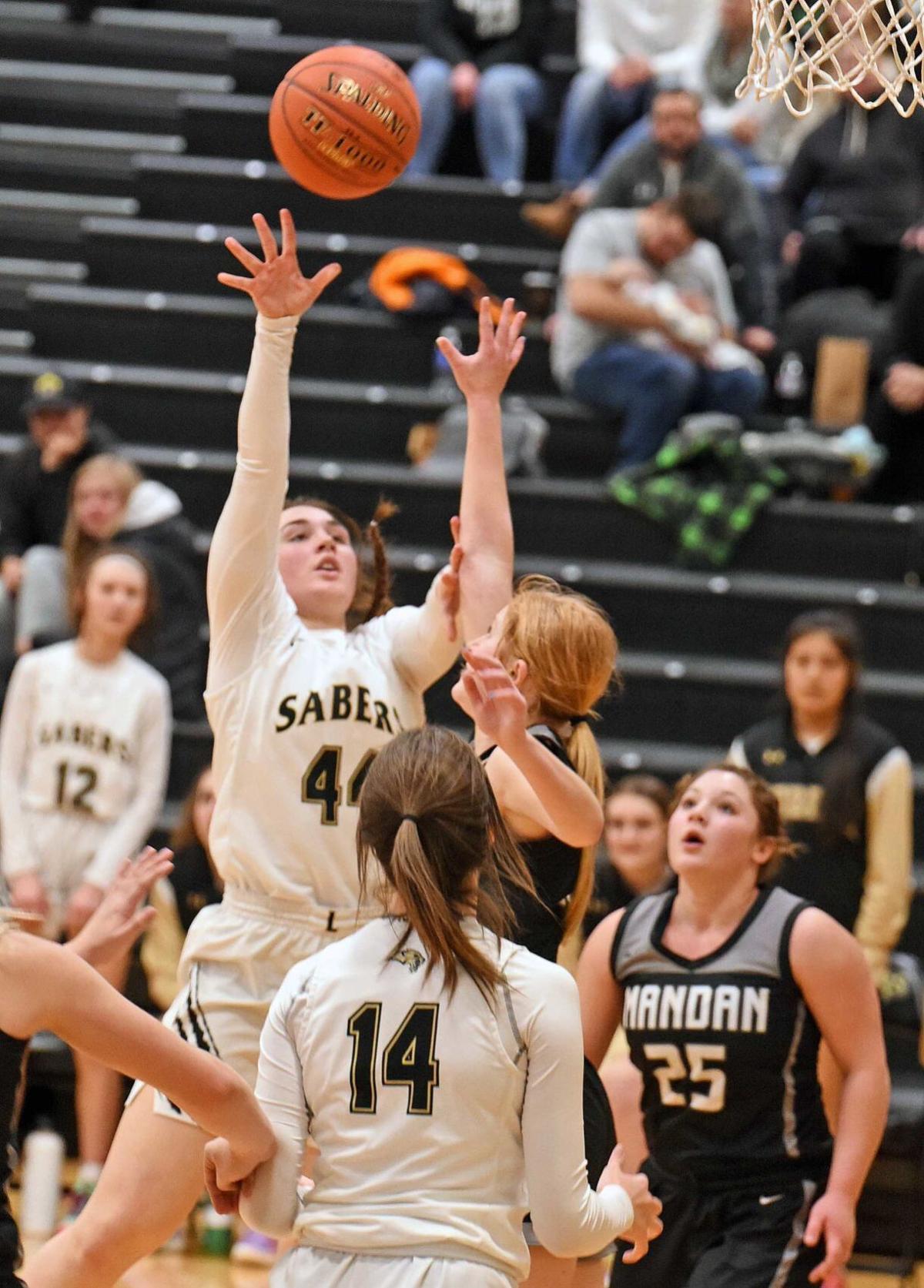 Then Alece Blazek followed suit, and so did Alyssa Eckroth.

The Legacy Sabers blitzed the Mandan Braves with long-range shooting and went on to post a 68-56 West Region girls basketball victory on Friday night at Haussler Gymnasium.

It may not have been a designed halftime adjustment, but the Sabers made it work.

“It wasn’t any big adjustment,” said Sabers assistant coach Cory Frink. “When we’re open, we shoot them. We shoot them with confidence. If they fall, they fall. If they don’t, we crash the boards. That’s our philosophy.

“Give the kids credit, they opened the game up a bit with the three-point shot. It’s not necessarily what we’re looking for every possession but we had kids step up and make shots and that’s crucial.”

Weigel hit four of Legacy’s 11 three-pointers and two of their seven after the intermission to finish with 14 points.

“It really boosted our confidence and it wasn’t just me hitting them. It was a team effort,” said the 5-foot-8 senior guard. “That was part of our game plan – driving, kick and trust your teammates that they’ll make that shot. That’s what we did and that’s what really stretched our lead. It really brought our confidence up as a team.”

Seven different players connected from beyond the arc for the Sabers, who hit 11 of 20 (55 percent) from long range. When the shots started to fall, it was contagious.

“It does,” Weigel said. “I started and then my teammates followed and it was really cool to see.”

Legacy led for most of the first half, taking their biggest lead of the opening 18 minutes on a pair of Eckroth free throws with 4:47 remaining to make it a nine-point lead at 22-13.

But Mandan battled back and closed to within five (26-21) at the intermission.

The long-range shooting helped Legacy take command. An 11-3 run over the first three minutes of the half pushed the Sabers’ lead to 13 (37-34).

A 16-5 burst including three-pointers from Mia Berryhill, Aliya Selensky, Weigel and Adison Sagaser made it a 17-point lead at 53-36 with 7:12 to go.

Eight different players scored for the Sabers, including three in double figures – Eckroth with 17, Weigel 14 and Sand with 12. Blazek – who also had a team-high eight rebounds – and Berryhill each finished with seven.

“We want to be balanced,” Frink said. “We play 10 kids pretty consistently and there’s a reason. We feel the kids we put on the floor can contribute.

“I thought that everybody contributed. Mandan went on their runs and we kind of were resilient and kept our composure. I like how we played team basketball, I like how we rebounded the ball, how we moved the ball. We had kids step up and make shots. We had kids that stepped up on both ends of the floor and that’s what we need.”

“Defense is a staple of our program,” Frink said. “If you can’t defend, you’re probably going to have a hard time finding minutes. … It’s one thing you can control. You can’t control the basketball going in the basket but you can control your effort on the defensive end.”

“We knew (McKenna) Johnson couldn’t be getting it in the post. We knew we needed help side and that our posts needed to work to make sure she didn’t get the ball down low,” Weigel said. “Piper (Harris) is a really good ball handler and we knew that when she has the ball we had to be in gaps because if that defender gets beat, we had to have their back. And I think we did a really good job on helping out when help was needed.”

Mandan hosts Jamestown on Tuesday, Jan. 8. Legacy is off until Thursday, Jan. 13, when the Sabers host Century.

The Bowman County Bulldogs have made a statement early on.