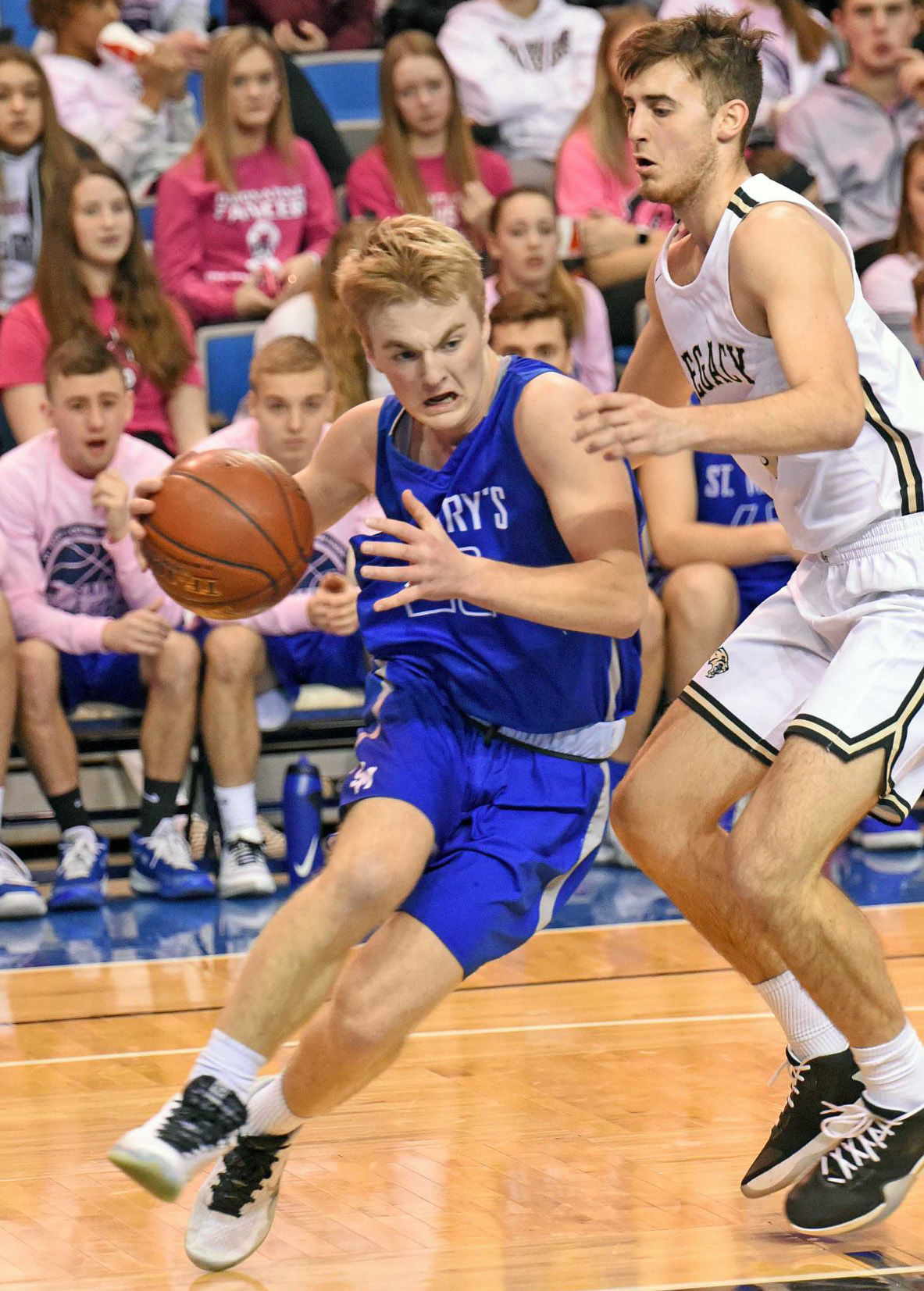 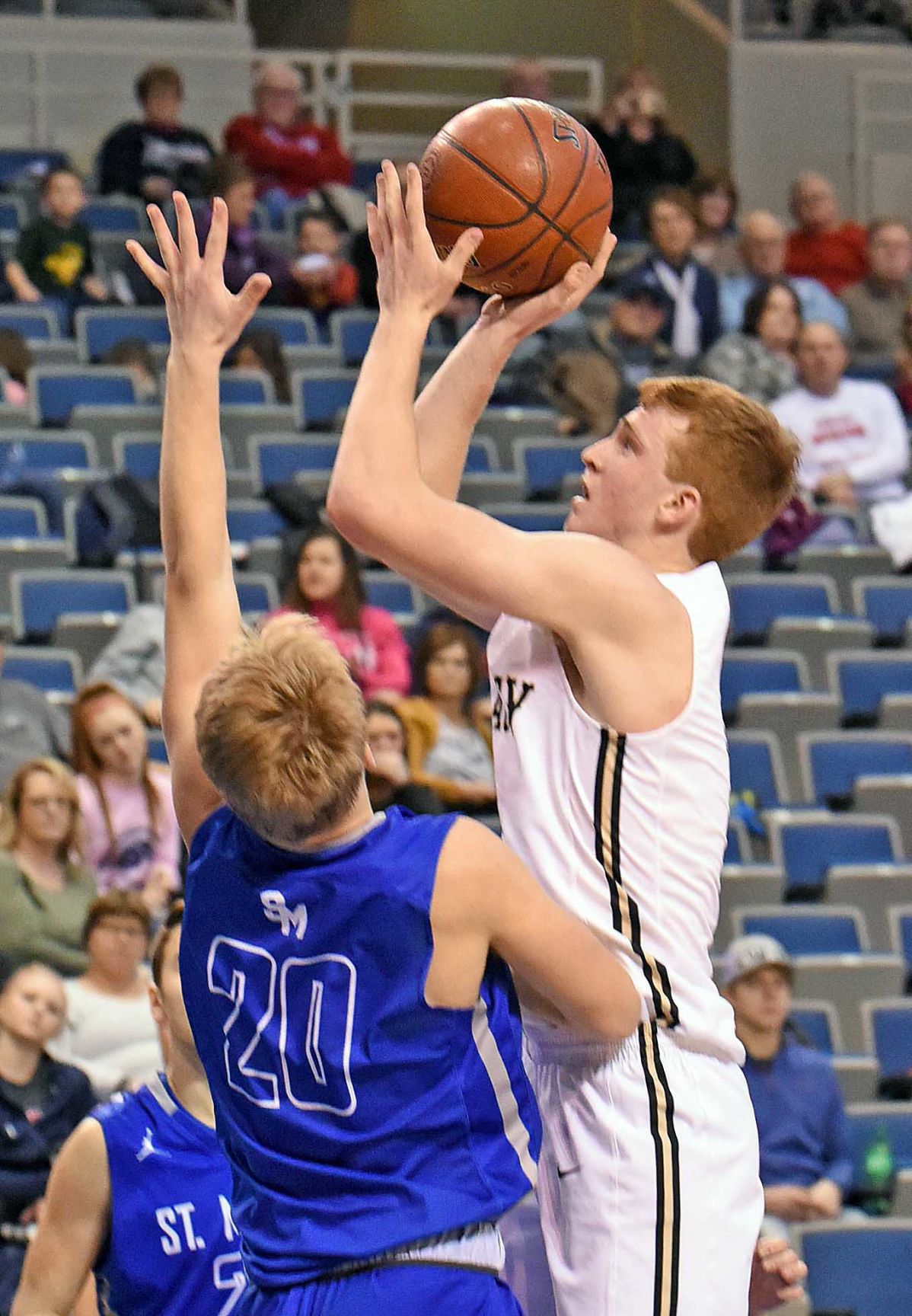 Defense helped the St. Mary’s Saints pick up a big win on Saturday.

St. Mary’s took command early in the second half, then held off a late comeback bid by the Legacy Sabers to finish off a 58-49 West Region victory at the Bismarck Event Center.

St. Mary’s took the lead late in the first half and built a 19-point lead with a big surge to start the second half.

Legacy led for much of the first half after opening the game on a 7-2 run, building a seven-point lead and taking a five-point lead on back-to-back baskets by Logan Wetzel and Rhett Clements with 5:07 to go before the break.

But after Ben Patton hit a runner to even the score at 25-25 with 3:47 left in the first half, Legacy managed just one free throw the rest of the way before the break, allowing St. Mary’s to take the lead.

Jaxon Wiseman, who finished with a game-high 18 points, converted a three-point play and Nick Schumacher hit four straight free throws in the final 15 seconds to give the Saints a six-point lead at the intermission.

St. Mary’s opened the second half scoring 13 consecutive points, stretching the lead to 45-26 on a Jackson Huller 3-pointer.

The Saints held Legacy without a field goal until Rhett Clements converted a three-point play with 11:32 left in the half.

Wiseman had a big game for the Saints (4-9, 4-8 West Region), and Drew Dosch and Uhler hit big shots in the second half for St. Mary’s.

“You’ve got to look for your leaders,” Dekok said. “Those three guys … they’ve proven they’re pretty good players in this league. They have to keep showing up, being consistent.”

The Saints weren’t out of the woods yet despite the big lead.

“Give coach (Jason) Horner a ton of credit. In this league, there’s no free wins. There’s so many good coaches,” Dekok said. “Coach Horner made some nice adjustments, threw that zone out there -- and that’s on me, I didn’t have our kids prepared to do it -- but we made some big shots when we needed them to hold on and get a ‘W.’”

Uhler’s running jumper with 1:25 left made it a 54-49 Saints lead. Thomas Jackson added a short-range jumper and Uhler cashed in on a pair of free throws with 23 seconds remaining to finish off the victory.

Wiseman scored a game-high 18 points for the Saints. Uhler and Dosch each finished with nine.

Legacy travels to Mandan on Tuesday, while St. Mary’s visits Williston on Friday.

Flasher and Underwood, the top two seeds for this week’s Region 5 girls basketball tournament at Mandan High School, are coming in hot.

The Century Patriots hope their streak of three-peats lasts one more night.

Pete Conway took one look at the final stat sheet and one thing quickly stood out.

You can’t count on scoring 90 points every night.

LOS ANGELES - Tears left a trail down the center of basketball's most famous face when Michael Jordan divulged a secret that not many people inside or outside the NBA had any clue about. We always knew what Jordan meant to Kobe Bryant. Through the former Chicago Bulls star's gravelly voice and red eyes Monday at Staples Center, we got to hear and see what Bryant meant to him. "Maybe it ...