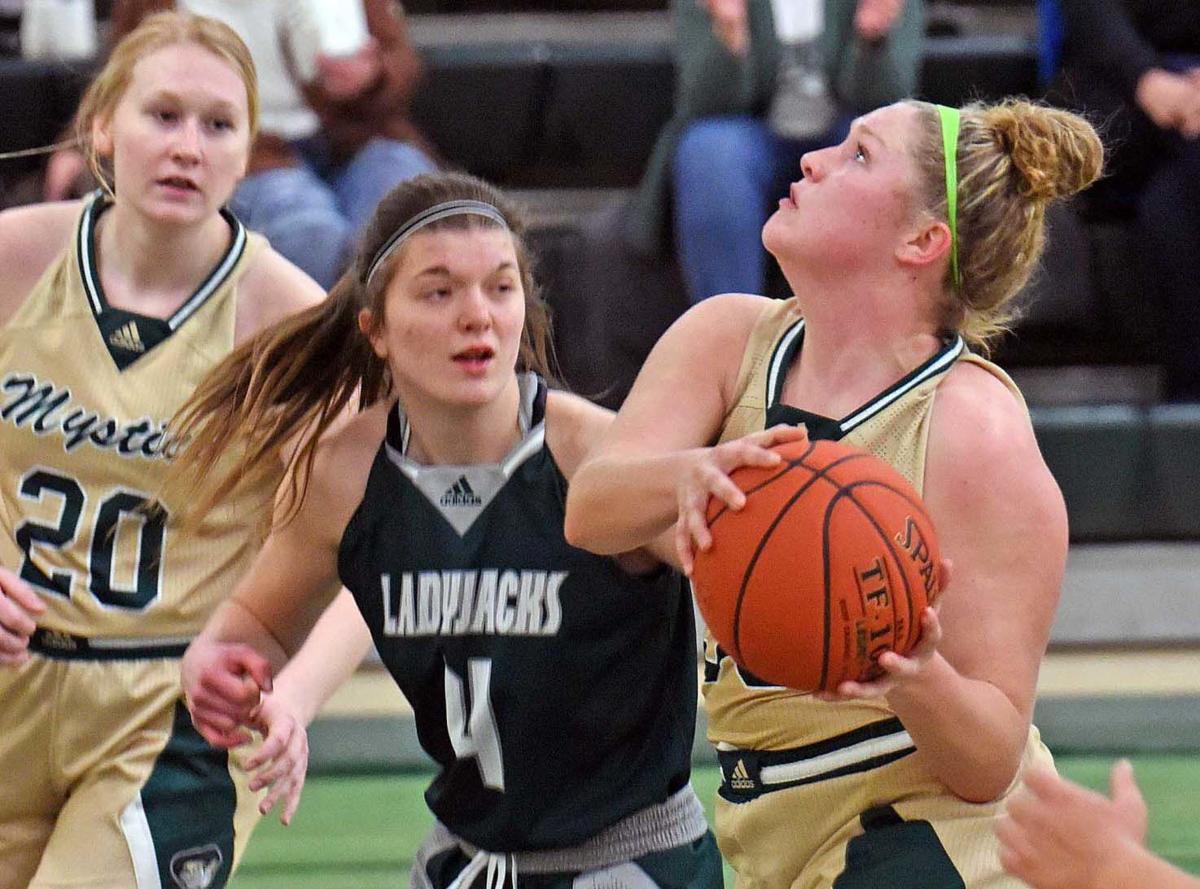 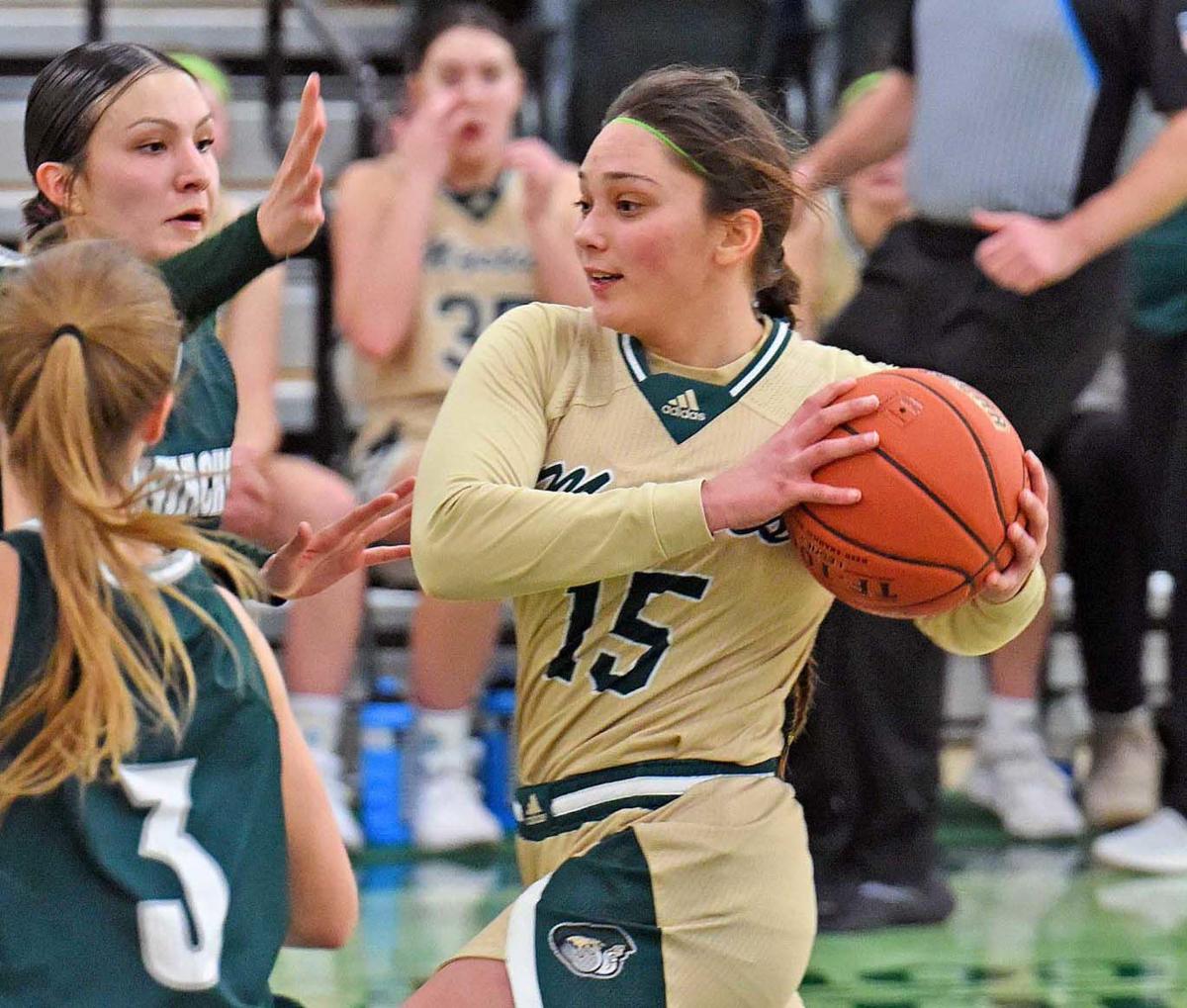 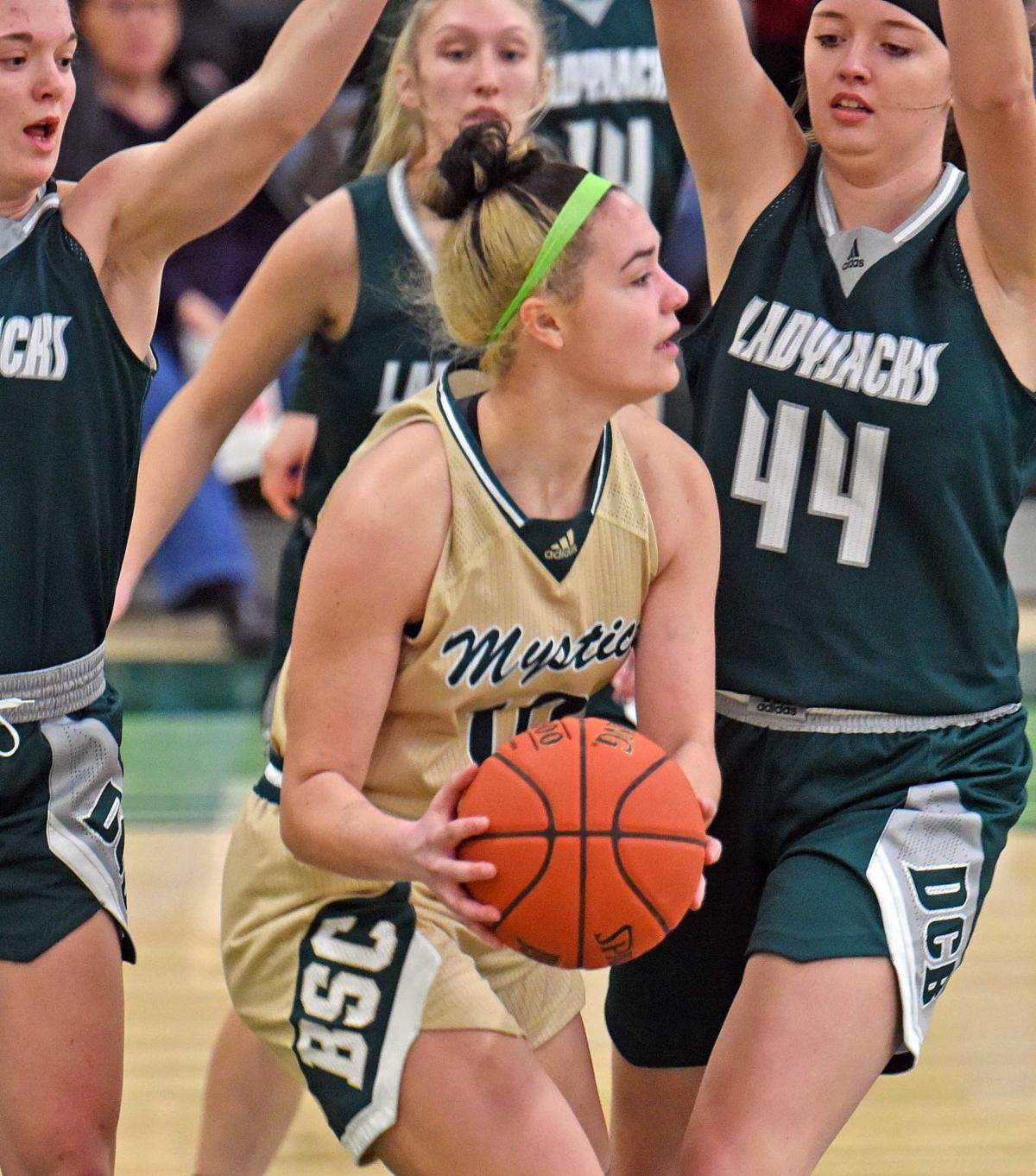 Mandan High grad Sydney Gustavsson poured in 22 points and eight players scored in all as Bismarck State College stretched its winning streak to 13 with a 69-53 victory over Dakota College-Bottineau Monday night at the Armory.

COVID-19 protocols kept Kaity Hove, Ashton Kinnebrew and Sam Oech out of the lineup, but BSC exploded to an 18-2 lead and never looked back. Hove and Kinnebrew are first and second on the roster in minutes.

"Like coach (Haggin) said, everybody needed to step up tonight and I think we did that," said Gustavsson, who is the Mystics leading scorer despite not starting a single game until Monday night. "We have 14 girls on our roster and every one of them was the best player on their team in high school. We all have a ton of confidence in each other that on any given night, any player on our team can come in and score 15 points and get 10 rebounds."

Thai Haggin, who has the Mystics at 15-1 on the season, was not surprised by her team's performance.

"Here's how I view it, everyone on our team is a star in their own role," she said. "We all lace up our shoes the same way. We all go to practice the same way and all 14 of them work their butts off.

"It doesn't surprise me at all because I see it every day in practice. I have confidence in every one of them."

Jaiden Baker, a freshman like Gustavsson, did a little bit of everything. The Legacy High grad totaled 12 points, 12 rebounds and five assists. It's the type of game Gustavsson saw often when the two went head-to-head in high school.

"We were rivals, yeah for sure, with Legacy, Century, BHS. We joke about it all the time about how we don't like Century because of all of those championships, but it's been so fun to play with those girls," Gustavsson said. "We learn from each other and make each other better."

The Mystics raced out to a 14-0 lead in less than 3 minutes against the Lumberjacks, who came into the game with a 10-5 record.

"Getting off to a good start was really important tonight," said Gustavsson, who scored nine points in the opening quarter. "Everything was clicking for us, and we were able to get some big stops. Defense always comes first for us."

The Lumberjacks tried to hang around. A 3-pointer from Courtney Herman, who led Bottineau with 10 points, cut the deficit to 12 (27-15) with 5 minutes left in the first half.

The Mystics had an answer, though. The home team scored 21 of the next 27 points, capped by back-to-back transition hoops by Mandie Picard and Jenna Rust, to push the lead to nearly 30 (48-21) at the break.

Rust and Picard finished seven points each. Reile Payne had two more than that and also dished out five assists.

"That's what I love about this team, how unselfish they are," Haggin said. "That's reflected when you look at our stats. They're all averaging about the same because nobody cares who scores."

Gustavsson, who will also play softball in the spring for the Mystics, said sharing the ball is contagious.

"It's so fun to play that way. We all have that mindset of trying to get the best shot and everybody's willing to pass," she said. "That makes playing defense a lot harder."

Maria Moore, a high school teammate of Gustavsson at Mandan, had nine points, three assists and three steals for the Lumberjacks, who fell to 10-6.

The Mystics, who have not lost since early November, hit the road on Thursday for a Mon-Dak Conference game at Williston State.

"When we get a lead, we need to stay a little bit more focused," she said. "We got a little careless with the ball late in the game. Sometimes we tend to relax a little bit, instead of maintaining the intensity that got us the lead."

The roster will be intact for the game Thursday against the Tetons, making for more spirited practices.

"It's great to be 15-1. I think we all had high expectations because so many of us knew each other coming in, but we definitely know there's things we can improve on," Gustavsson said. "Our conference is competitive. Wahpeton is a great team. We can't let up. We're going to keep working hard every day to get better."

The Bowman County Bulldogs have made a statement early on.