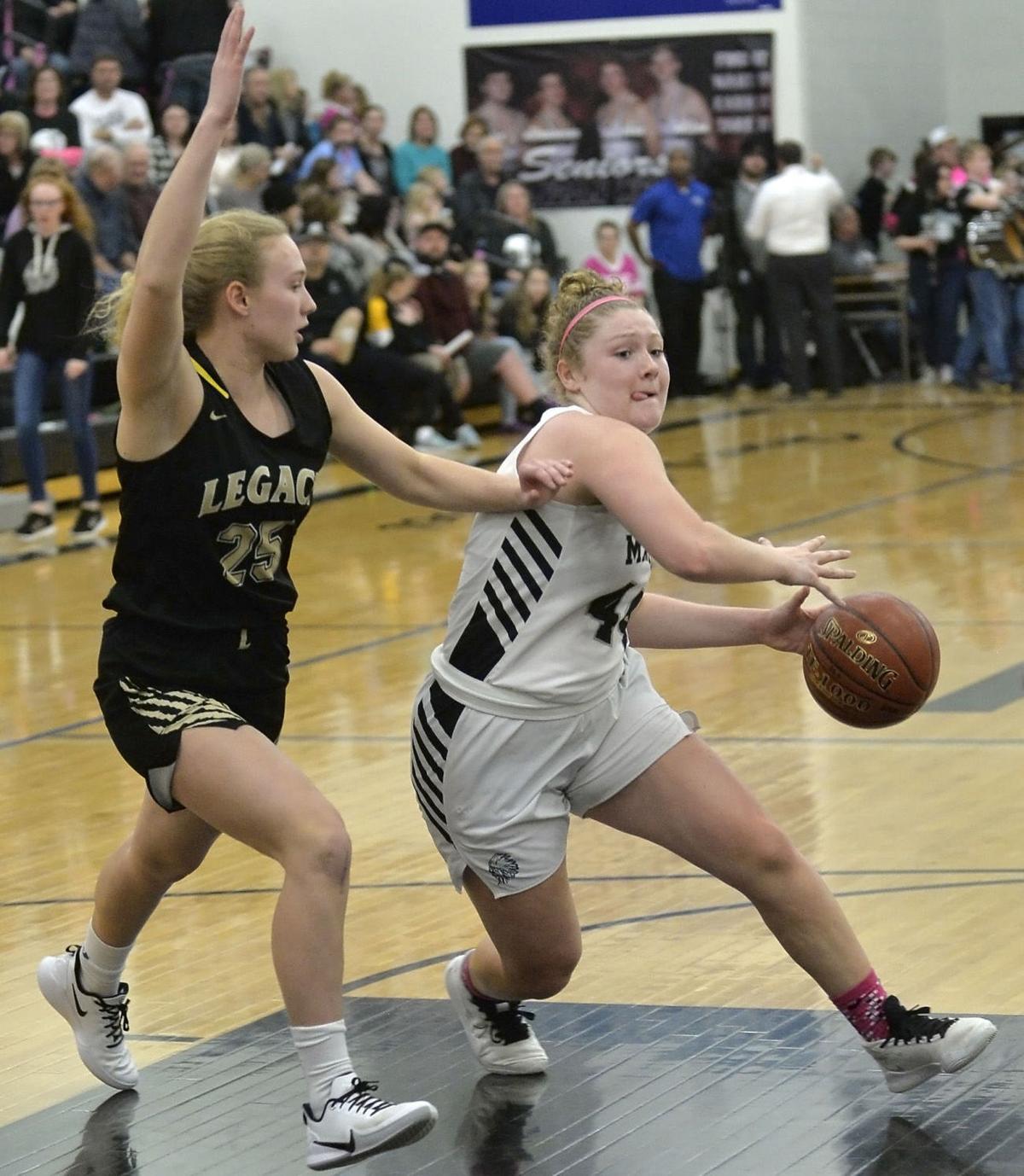 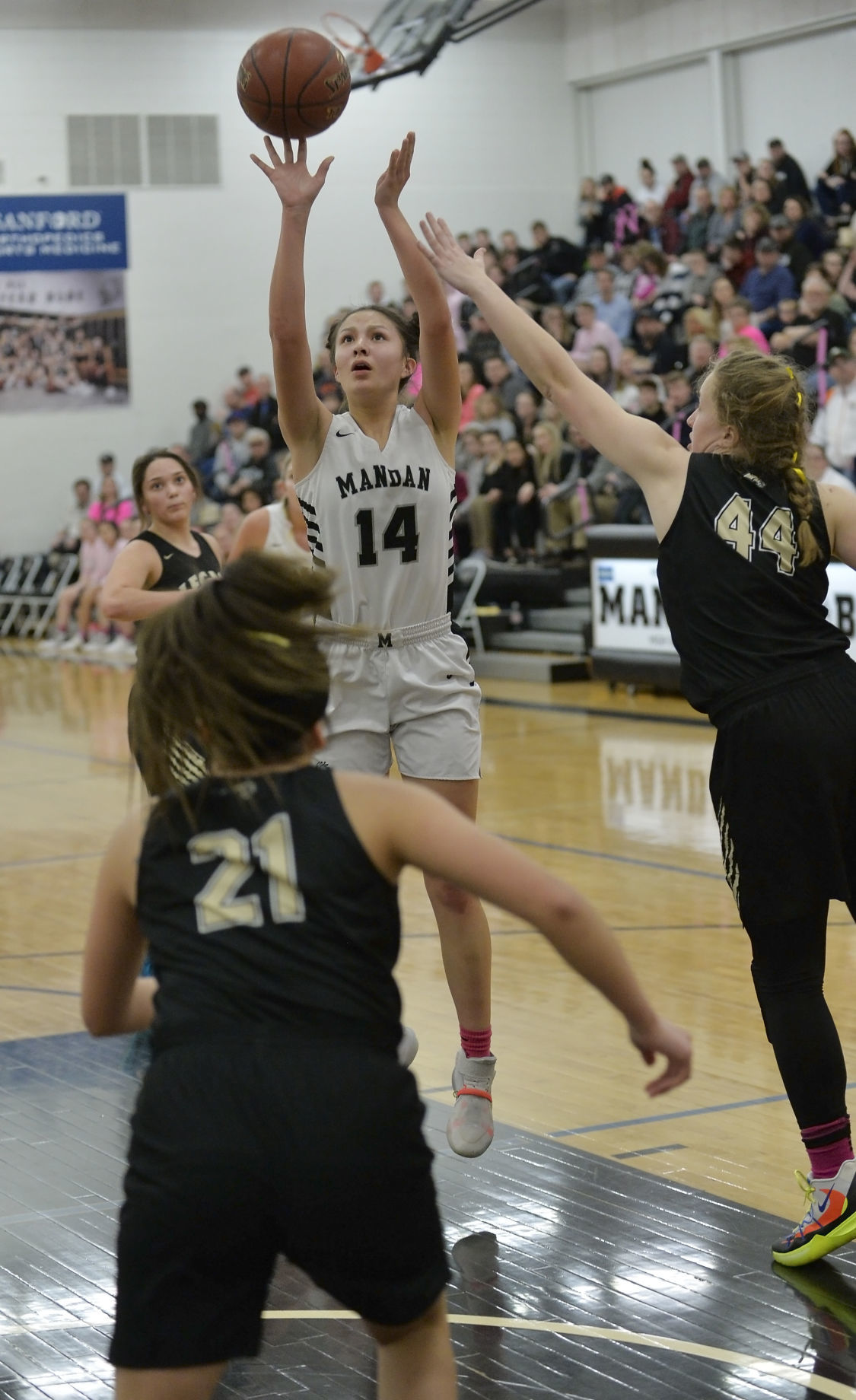 Bismarck Legacy had an answer for everything the Mandan Braves tried Tuesday in their West Region girls’ basketball game.

Mandan had a 15-2 run; second-ranked Legacy had an 18-5 run. Mandan led by six points in the first half; Legacy led by seven at the half. Mandan had six 3-pointers; Legacy had eight.

When it all shook out, the Sabers were still unbeaten, improving to 13-0 with a 75-64 win over the Braves at Mandan High.

“The game plan is to push the ball in transition,” Legacy coach Jim Petrik said. “The goal is to not let their defense get set. When you have the playmakers we have, you don’t want to limit them.”

“We knew they had been hitting a lot of threes and we wanted to defend the 3-point line,” Boone said. “We were going to defend that and also the drive.”

The Braves hit four 3-pointers in a three-minute span during a 15-2 run. They took an 18-17 lead on one of Gustavsson’s two 3-pointers with 11 minutes to play in the half. Aleah Clarke, Taylor Leingang and Piper Harris dropped bombs with Harris’ completing the run that staked the Braves to a 25-19 lead and prompted a timeout by Petrik.

“After that first timeout, we clamped down on defense,” Petrik said.

That they did. The Braves missed on seven of their next nine shots during an 18-5 run that gave Legacy the lead on Boone’s 3-pointer with 5:29 left. Alayna Hill capped the run with a banked 3-pointer with 3:12 remaining.

The 43-36 halftime cushion was all the Sabers needed even though Mandan showed life throughout the second half.

“When they did make their runs, we had kids step up and make plays,” Petrik said.

Darras opened the second half with back-to-back drives to the hoop to whittle the deficit to three points. But for the first of several times in the half, Legacy had an answer. Boone scored to stop the surge on a third-chance layup.

“Offensively we knew we had to move the ball,” Boone said. “We know we can run and get open looks. If not, we can slow it down.”

The Sabers stretched the lead to 12 before one final push by the Braves cut the lead to five at 59-54. After an exchange of baskets, Mandan’s Jordan Toman made two free throws with 4:54 to play. Those were Mandan’s final points.

Legacy swept the regular season series with Mandan. It won the opener 57-51 despite trailing at halftime.

Dan Seifert is a regular at state girls’ basketball tournaments, having coached teams to the big show in nine of the last 13 years, but never …

Things didn't quite work out for Davids Atelbauers at the University of North Dakota.

DALLAS - Mavericks owner Mark Cuban is hopeful the NBA will resume the 2019-20 season this summer. And he has a revolutionary idea that would increase stakes for playoff qualification. In a proposal Cuban has suggested to the league office, according to an ESPN report, the NBA would play five to seven regular-season games. Then the top 10 teams apiece in the Eastern and Western Conference ...

"The Last Dance" was superb entertainment - a 10-hour starburst of nostalgia that showcased the 1997-98 Chicago Bulls in general and iconic basketball player Michael Jordan in particular. But the series focused its Jordan-centric lens only through June 1998, when Jordan was 35 years old and once again standing at basketball's mountaintop. Jordan is 57 now. But the ESPN documentary only ...

What happened after 'The Last Dance'? A look back at the 1999 Bulls without Jordan, Pippen and Jackson.

CHICAGO - After the Bulls won their fifth NBA championship in 1997, Michael Jordan sat at the postgame news conference and fielded a question about a potential rebuild. "No one is guaranteed rebuilding in two, three or four years. The Cubs have been rebuilding for 42 years," he said, referencing their then-drought without a World Series appearance. A similar quip could be made about the Bulls ...

Bismarck High's Wilhelm says coaching honor's all about the kids

Jordan Wilhelm’s bet turned up all aces this season for the Bismarck High Demons.