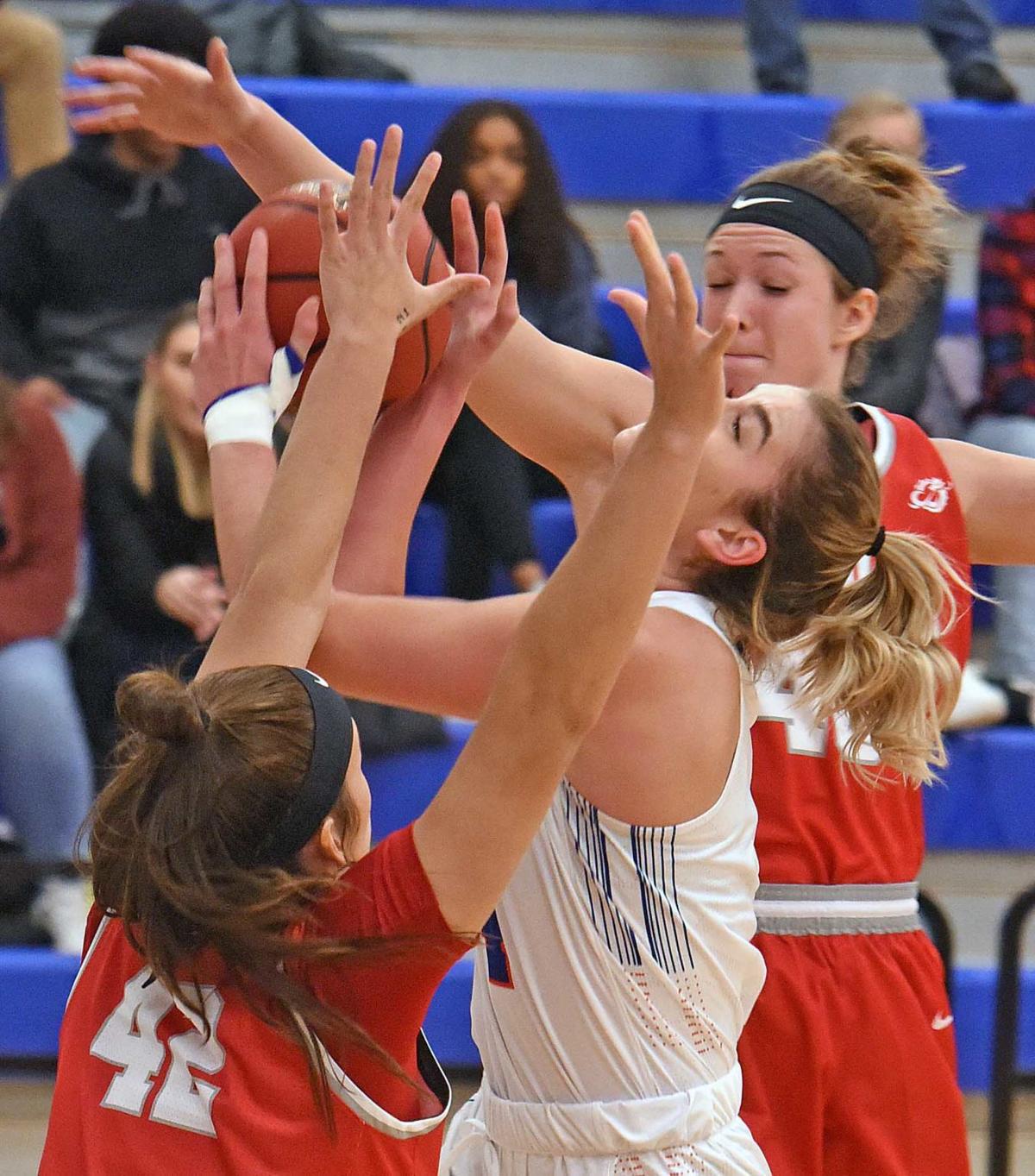 The University of Mary's Lexie Schneider, center, with shoots in traffic from MSU-Moorhead's Nicole Brown (42)and Madi Green during Friday night's game. 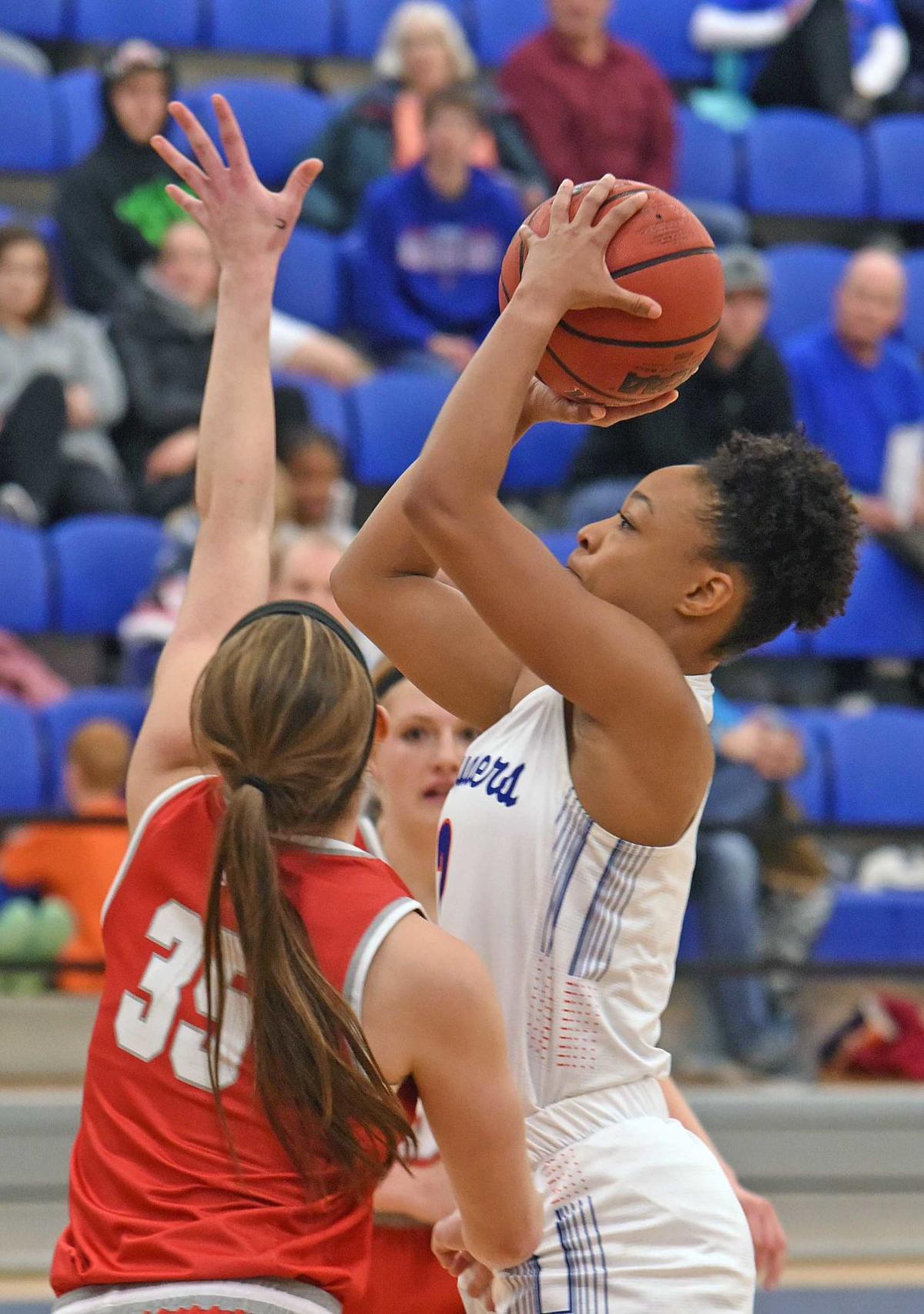 Eight is Enough is more than just ancient television reruns to University of Mary women’s basketball coach Rick Neumann and the Marauders.

Eight was the number of consecutive losses the Marauders had against the Dragons going into Friday’s Northern Sun Intercollegiate Conference match at the McDowell Activity Center.

Senior Cassie Askvig had 26 points and six rebounds as U-Mary knocked the Dragons from the ranks of the NSIC unbeatens with an emphatic 89-68 win. The Marauders outscored the Dragons 48-34 in the second half, helping Askvig and fellow senior Christal Hearn to their first career win over MSUM. Hearn added nine points.

“Coach made it clear,” Askvig said of the streak. “It was a week-long process. We were just sick of losing to them.”

“Our girls were just hungry,” Neumann said. “We needed this one tonight. We did what a good team is supposed to do, shoot well at home. We had one of those nights.”

“You have to relish those and take them and go,” Neumann said.

Macy Williams had 12 points and Lexie Schneider 10 for the Marauders. They helped offset Peyton Boom’s 16 points for MSUM. Megan Hintz added 11 and Madi Green and Natalie Steichen 10 each.

The Marauders jumped out to a 5-0 lead but the 24th-ranked Dragons came back behind junior Sarah Jacobson, whose steal and breakaway was part of a 9-0 run. Jacobson had seven of the nine points, including a 3-pointer that made it 9-5 with 7:21 left in the first quarter.

Jacobson, a former North Dakota Miss Basketball and the state’s all-time leading Class A scorer, joined the Dragons after two seasons at North Dakota State. She made just 5 of 13 shots and finished with 12 points.

The teams exchanged leads four more times before the end of the first quarter, the last time on Askvig’s three-point play that made it 17-16 with 40 seconds to play.

MSUM took its biggest lead of the first half with 8:48 left on a Green drive to the basket that made it 24-19. Eighteen of the next 23 points belonged to the Marauders, who eventually took their largest lead of the half at 41-32 on Williams’ free throw with 1:19 to play.

The teams were near mirror images offensively in the first half, which ended with the Marauders up 41-34. U-Mary shot 45 percent and MSUM 47 percent. U-Mary made all nine of its free throw attempts in the half.

Just when it looked like U-Mary had found its groove, halftime knocked it off the rails. The Dragons went on a 10-2 run to tie the game 43-all with 6:19 left in the third quarter.

But the third quarter ended much like the first two, with the Marauders on a roll. A 20-5 run to close the quarter staked U-Mary to a 63-50 lead. Gillette had 10 of her 18 points in the quarter.

And it was all U-Mary down the stretch.

“It was a momentum switch,” Askvig said of U-Mary’s closing 46-25 run. “We always talked about how teams are going to make runs. But when we made that last one, we said ‘that’s enough, we’re taking it the rest of the game.’”

With the game on the line, the Century Patriots turned to Cade Feeney.

Three-pointers, layups, fast breaks, pull-ups. It didn’t matter what was available, the Bismarck Demons took it on Friday. But mostly 3-pointers.

Bismarck holds off Century at the horn

Nobody's been better in a shootout than high-scoring Bismarck High this season.

Grace Kelly scored the first basket of the game for Shiloh Christian on Saturday, then reemerged when it mattered most to help the Skyhawks h…

Somebody at Bismarck Legacy has to step into the role usually filled by Rhett Clements. On Tuesday, that was Keagen Woodbury.

Legacy came into Tuesday’s West Region girls’ basketball game against St. Mary’s at the Event Center with the best scoring average in the Wes…

If the holiday break did anything to the Bismarck Demons, they hid it well.

Century’s first seven wins of the season have been pretty similar.

The University of Mary's Lexie Schneider, center, with shoots in traffic from MSU-Moorhead's Nicole Brown (42)and Madi Green during Friday night's game.