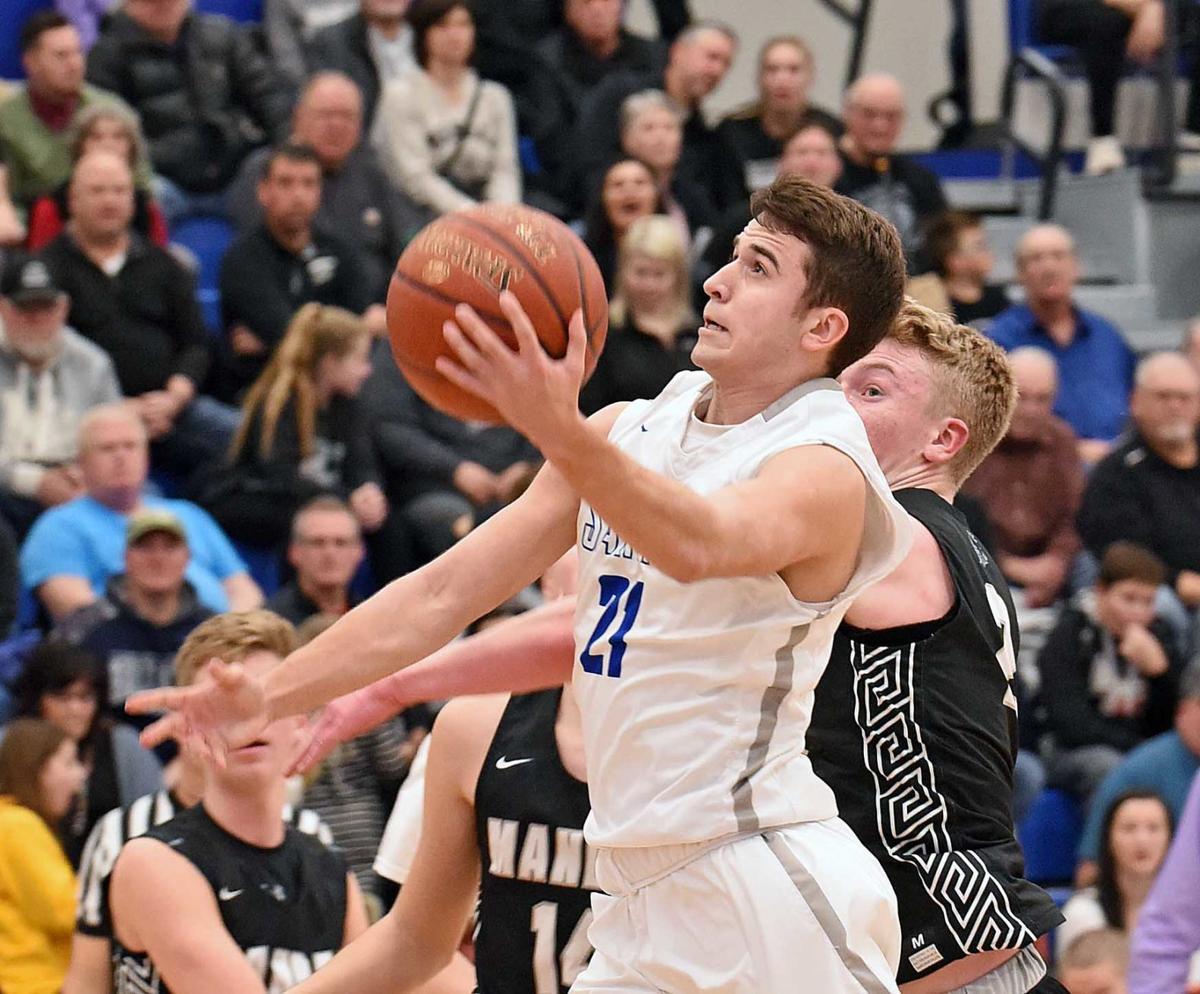 St. Mary's Jaxon Wiseman (21) goes up for a shot as Mandan's Jaxton Wiest, back, defends during Tuesday night's game. 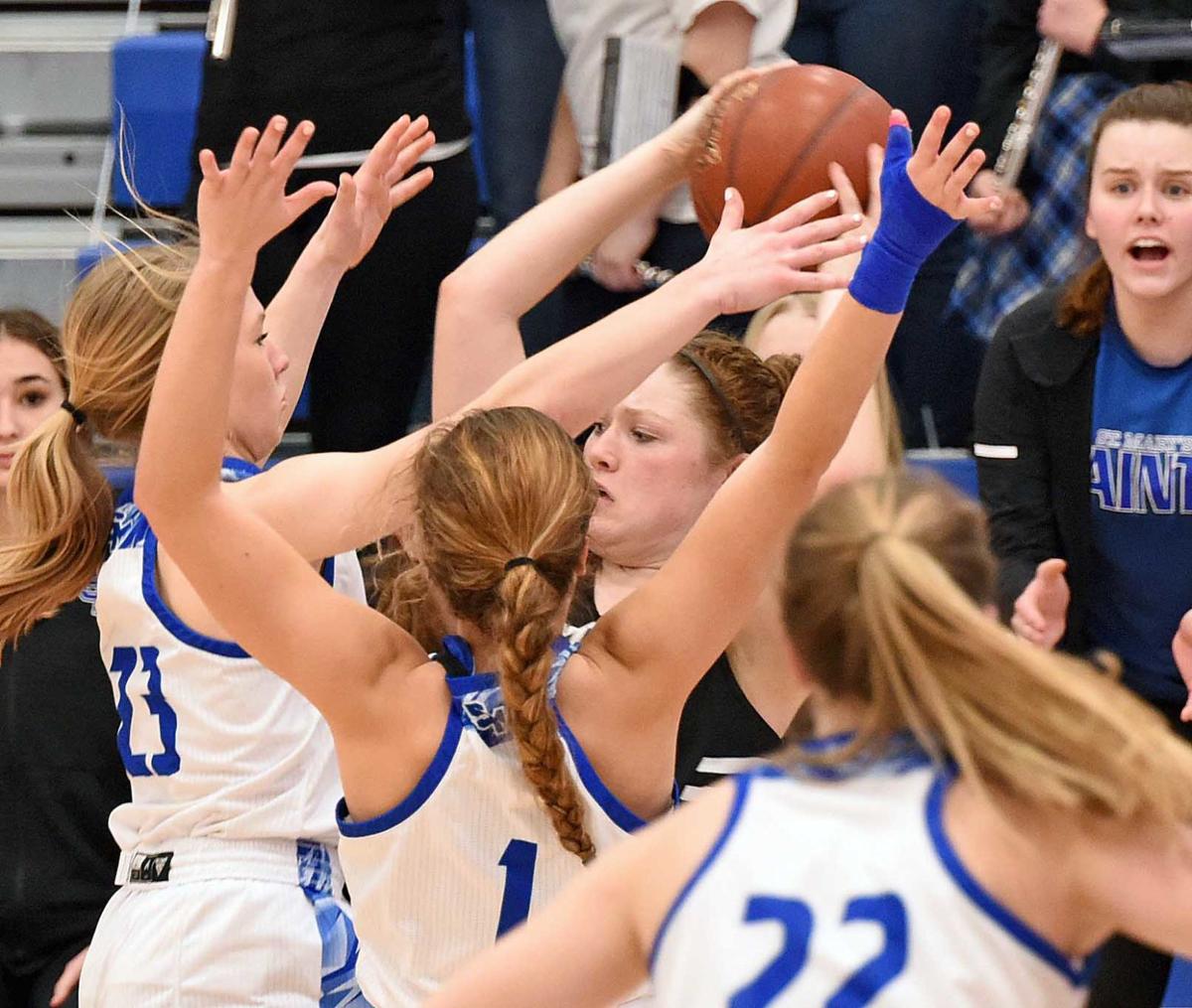 Mandan's Sydney Gustavsson (44) looks to pass while being surrounded by St. Mary's, from left, Abigail Kopp and Elizabeth Peyerl during Tuesday night's game. 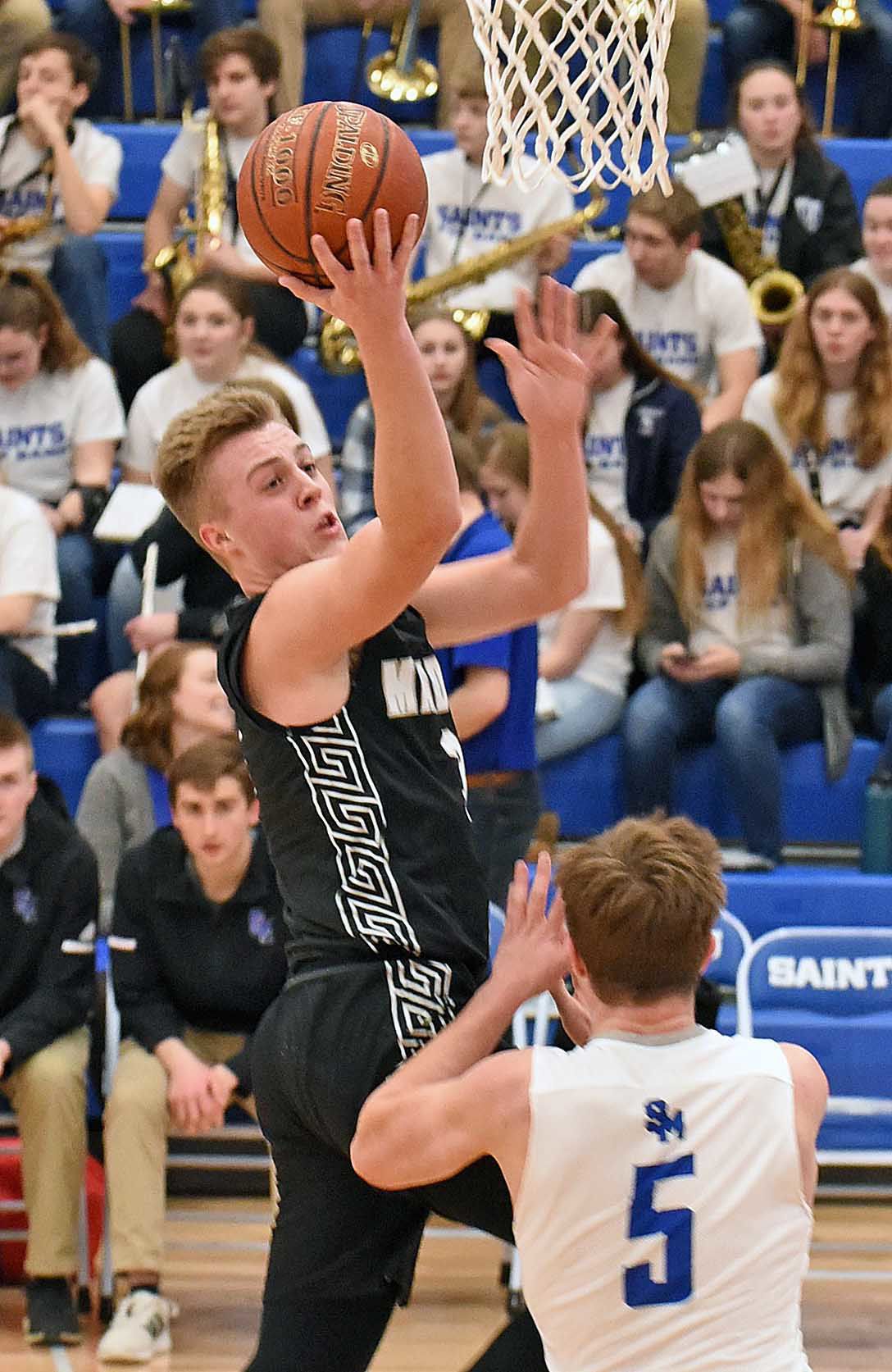 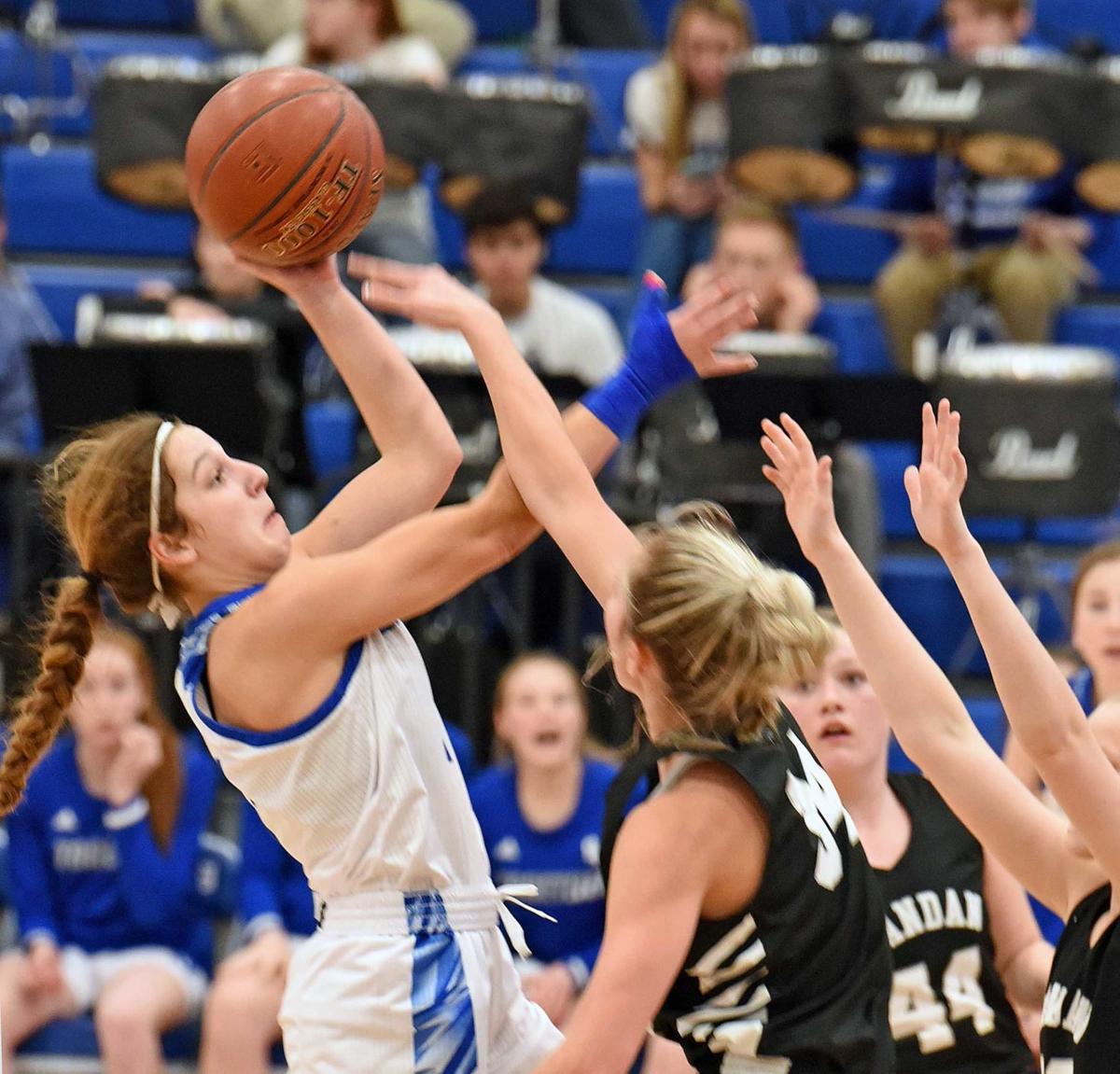 The Mandan Braves not only took away St. Mary’s running game on Tuesday, they actually used it against the Saints in a 70-53 West Region boys’ basketball win at St. Mary’s gym.

Mandan took control early and used a combination of transition scoring, 3-pointers and Elijah Klein underneath to pick up the win.

“Making them use the whole shot clock we were able to slow them down and they weren’t able to score in transition,” Mandan coach Brandon Schafer said. “They’re a great running team. For us to score some in transition was a benefit to us.”

Klein led the Braves with 14 points, including a two-handed breakaway slam as the Braves were pulling away in the second half.

Th Saints matched Mandan basket for basket early. They tied the game for the last time at 13-13 on Jaxon Wiseman’s jumper with 9:54 left in the first half. Wiseman finished the night with a team-high 12 points.

Klein ignited an 18-3 run with an old-fashioned three-point play, the first of two on the night.

By the time the run ended with 4:38 left, the Braves had the cushion they needed to ride out the game. That streak also featured all three of Tyler Thilmony’s 3-pointers. He had nine points on the night.

The first half ended with Mandan up 38-21, but St. Mary’s made a quick run out of the break and closed within 42-33 before Schafer called timeout.

“The start of the second half they made a run at us and we talked about that. They are a good team,” Schafer said. “They’re going to make a run and we just had to weather the storm. After that we refocused.”

That meant slowing the pace.

“We did a better job of denying them and slowing them down and making them use the shot clock,” Schafer said.

Mandan led 44-37 with 12:59 remaining but quickly got the lead back to double figures where it stayed.

The Braves hit eight 3-pointers. In addition to Thilony’s three, Jayce Lowman had three among his 13 points and Dane Carlson had two.

Zach Haas had 10 points for the Saints.

Klein’s 14 rebounds helped the Braves to a 34-27 rebounding edge.

Abby Kopp’s shot as time ran out was blocked by Amaya Ramsey and the Braves hung on to win despite getting just one basket in the last 8:46 of the game. Ramsey’s 3-pointer with 1:40 to play ended a long drought and gave the Braves a five-point lead. They needed every bit of it.

With 58 seconds left, Hallie Schweitzer, who missed much of the first half in foul trouble, scored to cut the deficit to three.

Lakyn Darras, who led the Braves with 22 points, made two free throws, which Schweitzer answered with a layup.

The Saints stole the inbounds and Kopp was fouled. She made two free throws with 10.4 seconds left to play. On the ensuing inbound play, the Braves Sydney Gustavsson stepped on the sideline giving the Saints the ball with 7.5 seconds to play.

Kopp got the ball and dribbled to her right before putting up a shot in the lane that Ramsey got a piece of.

“It’s been our issue all year. We get pretty good leads then we just don’t put teams away,” Thomas said. “But give credit to the WDA in general, teams just don’t allow you to put them away.”

The first half was a duel between six-footers in St. Mary’s Maria Mann and Darras.

Mann drained a turnaround 15-footer with one second left to finish the half with 17 of her 22 points.

Darras carried the load in the latter stages of the first half for the Braves. She had eight of Mandan’s last 11 points and went into half with 15 points as the Braves led 34-27.

The Braves bumped the lead to 48-35 with 14:20 but followed with a scoreless stretch of 5:33 before Ramsey’s first bucket of the half. Ramsey made a free throw with 7:49 on the clock … then … nothing until the Saints were back in it.

“You feel bad for the girls,” St. Mary’s coach B.J. Etzold said. “We just kept fighting and doing the little things down the stretch. There’s a lot they can learn from this game. The girls learn from their mistakes.”

Kopp was the only other double-figure scorer for either team with 14 points.

Flasher and Underwood, the top two seeds for this week’s Region 5 girls basketball tournament at Mandan High School, are coming in hot.

The Century Patriots hope their streak of three-peats lasts one more night.

Pete Conway took one look at the final stat sheet and one thing quickly stood out.

You can’t count on scoring 90 points every night.

The University of Mary didn’t need a scoring record out of Cassie Askvig this time, not when everybody chipped in to beat Southwest Minnesota …

LOS ANGELES - Tears left a trail down the center of basketball's most famous face when Michael Jordan divulged a secret that not many people inside or outside the NBA had any clue about. We always knew what Jordan meant to Kobe Bryant. Through the former Chicago Bulls star's gravelly voice and red eyes Monday at Staples Center, we got to hear and see what Bryant meant to him. "Maybe it ...

St. Mary's Jaxon Wiseman (21) goes up for a shot as Mandan's Jaxton Wiest, back, defends during Tuesday night's game.

Mandan's Sydney Gustavsson (44) looks to pass while being surrounded by St. Mary's, from left, Abigail Kopp and Elizabeth Peyerl during Tuesday night's game.