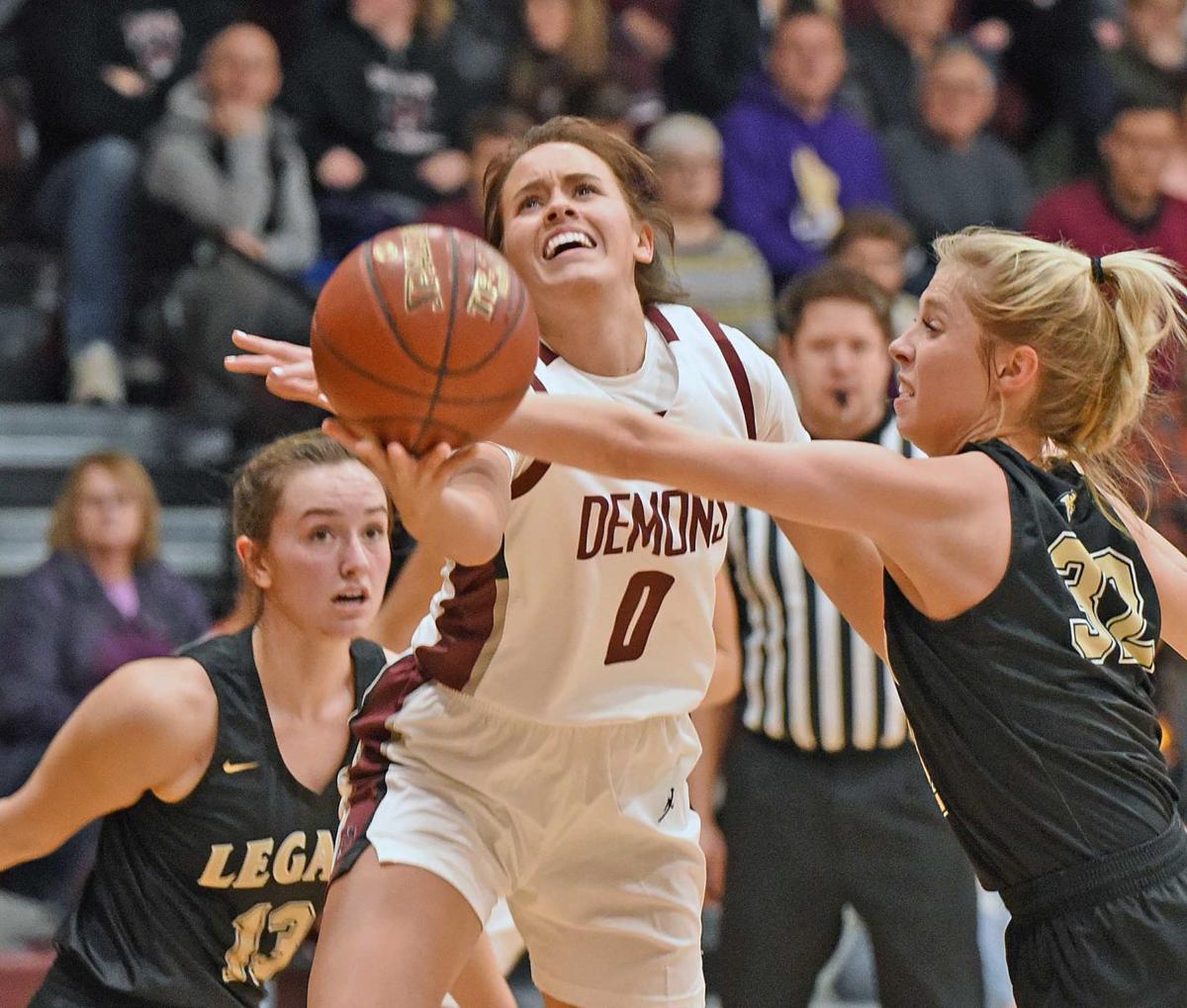 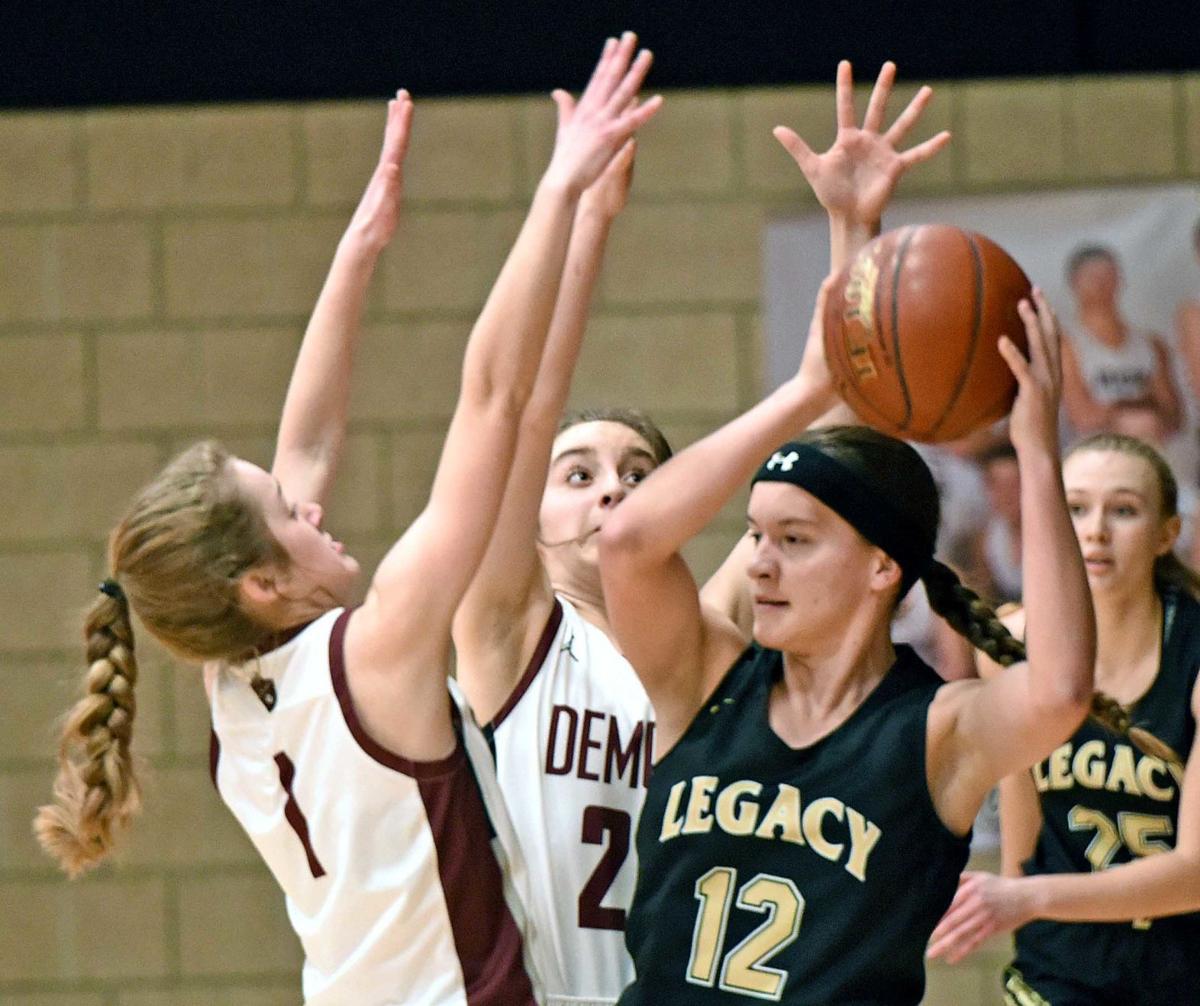 Either way, unbeaten Legacy showed it had plenty of moxie Tuesday night in a 62-59 West Region victory at Bismarck High School's Karlgaard gym.

Although sometimes lacking in artistic merit -- 41 turnovers and 36 personal fouls -- the game was a terrific show for the plentiful spectators in the seats. Legacy blew out to a 11-1 lead at the outset. Bismarck immediately rallied to open an 18-17 lead. But once the teams got down to brass tacks, the basketball was high-octane and hard-fought. The biggest lead in the game over the final 21 1/2 minutes was six pints.

Unbeaten and third-ranked Legacy won by making the big plays down the stretch, and nobody made more of them than the Sabers' 5-9 junior Jaiden Baker. Baker, who finished with 14 points and 11 rebounds, dominated the final minute and one-half.

With the game tied at 57, Baker converted a nearly full-court pass from Arianna Berryhill and made a layup to give Legacy the lead for keeps.

Then, with the score 59-57, Baker guarding the in-bounds pass after a BHS timeout, made a critical steal with 20 seconds to play. On the ensuing possession, Baker made two free throws to put Legacy in command 61-57 with 16 seconds on the clock.

"I knew she was going to do the head-fake ... and then I knew she'd go to the backcourt side," Baker said of her pivotal steal. "So I anticipated it."

Baker is a transfer student. She played at Mandan last season, mostly on the junior varsity.

"This helps out a lot. It shows that when we're down we have the energy and experience to come back," she said.

Although harrowing, Baker said it was fun to be a part of such a nip-and-tuck game.

"It was very fun. It was a good challenge," she said.

The Sabers play host to St. Mary's in their next outing on Saturday. Baker said she prefers not to have a replay of Tuesday's battle, unless ...

"Not unless we have to," she said.

Although long on drama, the game was short on personal heroics. Each team had three double-figure scorers, but nobody exceeded 14 points. Baker's 14 led the way for Legacy. Berryhill and Ashton Sagaser followed with 13 and 12 respectively.

Petrik said Tuesday's experience was anything but relaxing, but he expects it to have long-term benefits.

"One hundred percent," he said. "In (future) situations like this it will definitely pay dividends. At tournament time we'll know we can make adjustments and find a way to win."

"Bismarck wore us down in the first half and made their run," he noted. "... I credit our girls for finding a way to make plays down the stretch. ... Our halftime talk was on decision-making."

That was necessary after Legacy's 16 first-half turnovers against Bismarck's aggressive full-court pressure. The Sabers trimmed the giveaways to eight after intermission.

BHS coach Bill Shetler said it was frustrating to see the game get away after such a determined effort by his players.

"I think we turned the ball over four of our last five possessions," he said. "We're a young team, but we've got to start learning. ... I'm proud of the way we've played the last six or seven games.

"It sucks to lose, but look at where we are now compared to a month ago. It's tough to lose one like this, but we can take away things from this game to build on."

Things don't get any easier for the Demons. Their next outing is Saturday against Century at the Bismarck Event Center.