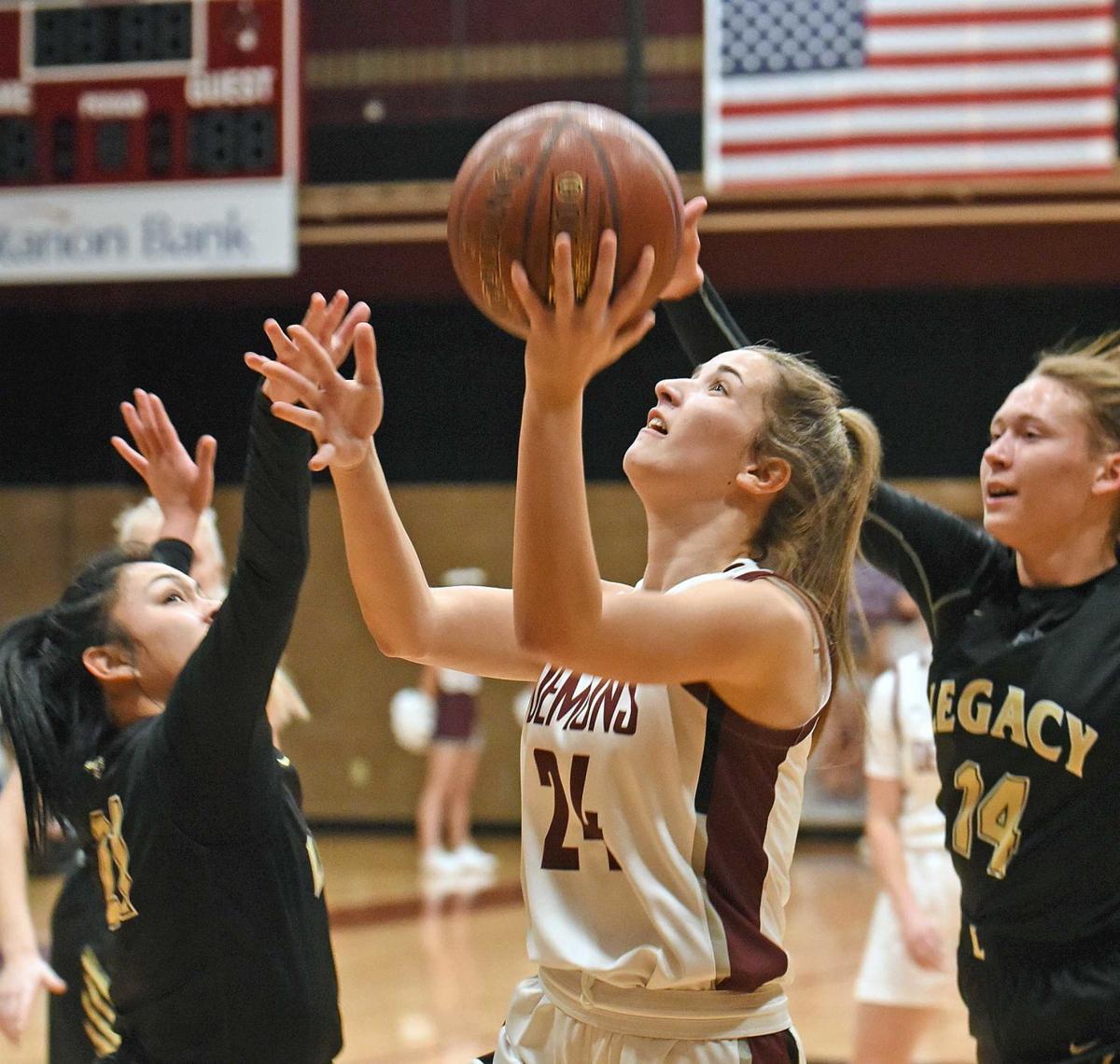 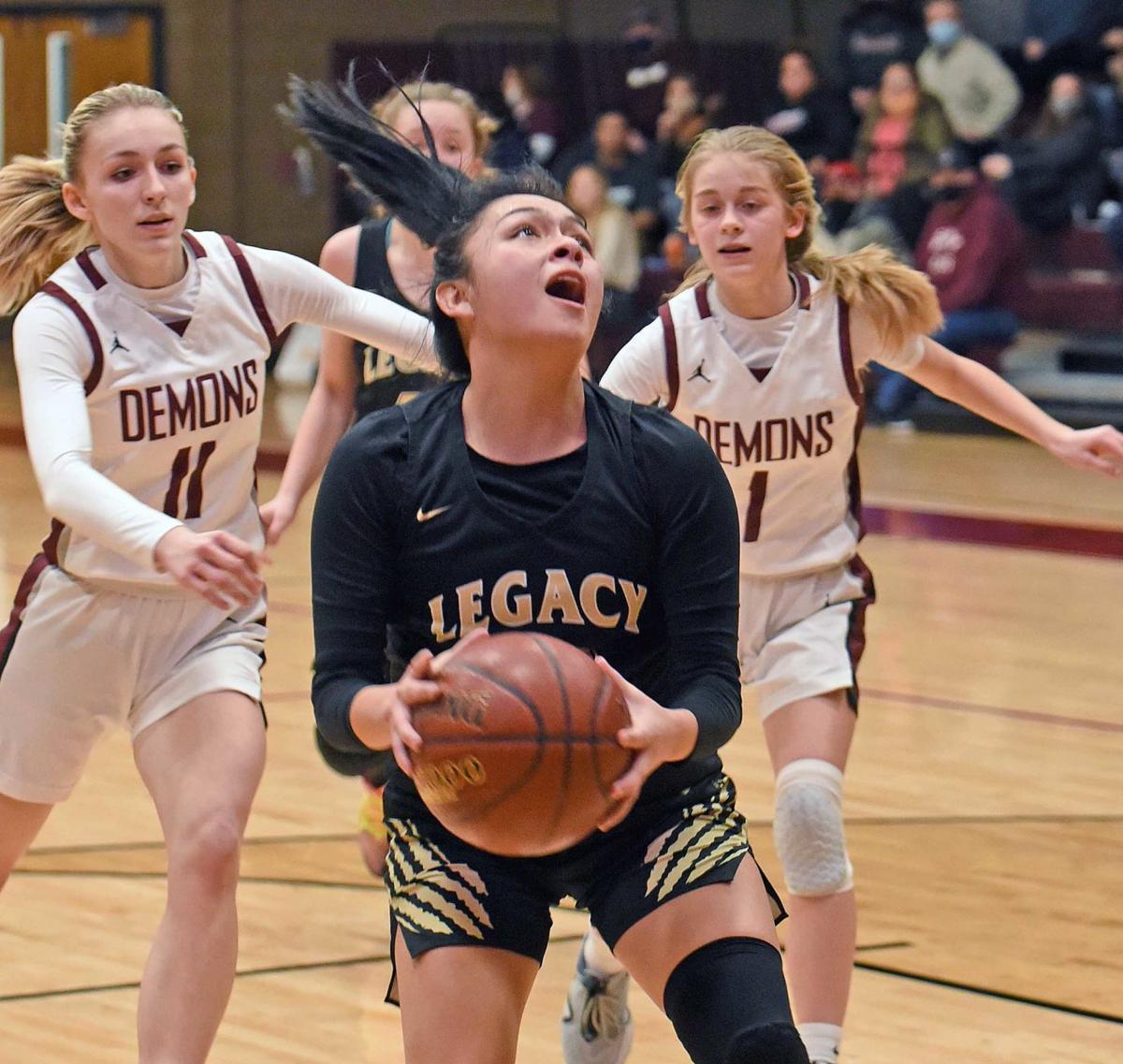 Legacy's Alayna Hill pulls up near the rim for a shot in front of Bismarck's Miyah Holzworth (11) and Paige Breuer, right, during Tuesday night's game.

In a matter of four minutes, a 16-point lead was cut to one.

With four minutes to play and the game on the line, the Bismarck High girls were unfazed.

The Demons answered a late Legacy charge, finishing the game on a 10-4 run to post a 61-54 West Region victory over the Sabers on Tuesday at the Karlgaard Gym.

A big West Region victory over a Legacy team that was receiving votes in the latest Class A poll and entered the night just a game back in the West Region standings was a mark of how much the Demons have progressed.

“They’re a tremendous team,” BHS coach Bill Shetler said. “They have skilled players all over the place, so we knew they were going to make a run. We didn’t want it to be that quick, just a blink of an eye and boom, it’s to one. But two weeks ago, I don’t know if our girls would have hung on and found a way to win that one so I’m super happy with the steps we took forward tonight.”

“We made shots for a stretch, just like they made shots when they made their run,” Shetler said. “But we have skilled players that just need to trust each other and trust our system and move the ball. When we were moving it, when we reversed it, we got any shot we wanted. Then when they made a little run we kind of panicked and took the first available one, which wasn’t what was giving us our success. I was happy with the way that we moved it until their little spurt.”

With the Sabers charging late, the Demons answered.

Sand hit another jump with 23 seconds left, but the Demons iced the win with free throws from Peyton Gerving and Picard.

“We have three losses and two of them were by a combined three points,” Shetler said. “So to hang on to this one was monumental for our progression because we’re playing the way I want us to play and the way that we need to play to be successful. I’m glad that this one rewarded us because we put a heck of an effort out there tonight.”

“We play a lot of girls but we trust a lot of girls,” Shetler said. “I’m not going to put somebody on the floor that I don’t trust. Hopefully that kind of wears off on them, that I’m out here for a reason, I have the confidence to go and make this shot or I can go make this free throw. I’m happy with everybody who stepped up today.”

Jesse White isn’t a household name on the North Dakota high school basketball stage, but he should be.

Mandan pulls stunner, knocks off Jamestown behind 21 points from Lowman

Jamestown has had Mandan's number in recent years.

Logan Nissley's sore shooting wrist will have to wait. There's work to be done.

Stingy defense key for Demons in win over Century

The postseason can be a completely different game than the regular season.

Kupfer pours in 35 points to lead Legacy over Mandan

After 177 points had been scored, it was a defensive stand for Minot which proved to be the difference Saturday night at the Bismarck Event Center.

Nick Kupfer and the Legacy Sabers are headed back to state.

Latecomers beware. When you miss a little, you can miss a lot.

Legacy's Alayna Hill pulls up near the rim for a shot in front of Bismarck's Miyah Holzworth (11) and Paige Breuer, right, during Tuesday night's game.