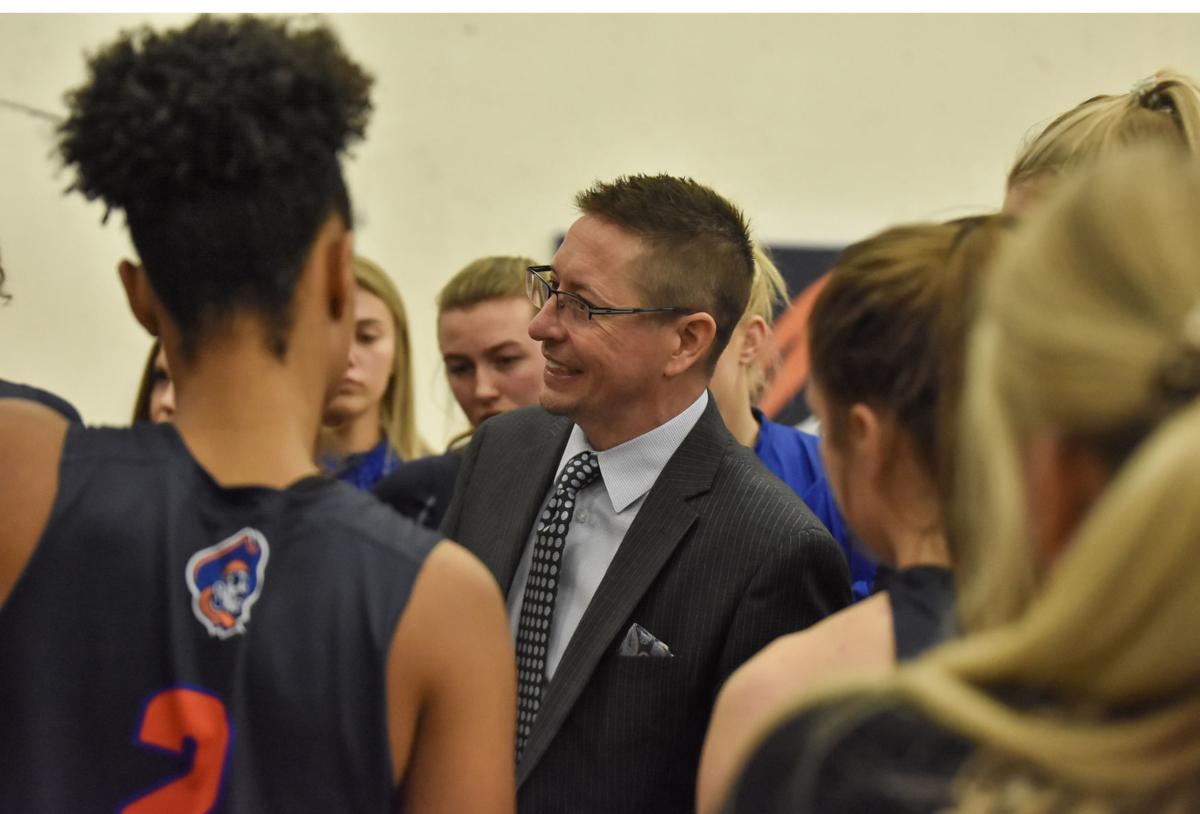 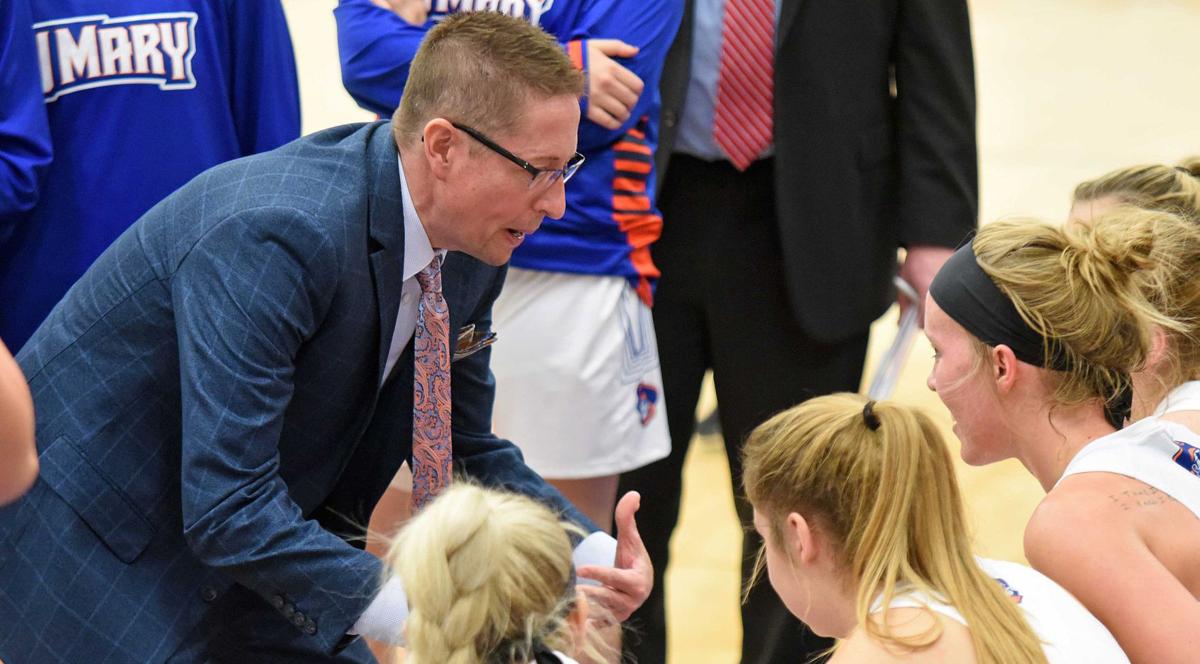 Whenever you get that itch to set social distancing aside and get together with friends that “likely” aren’t infected with the novel coronavirus (COVID-19), think twice about it.

If not for you, then do it for people like University of Mary women’s basketball coach Rick Neumann, one of the so-called people with underlying conditions for whom the virus could prove deadly.

“It’s a little scary,” Neumann said from his home where he has mostly self-quarantined to minimize chances of being infected. "The tricky part with all this going on and trying to take care of my players is I don’t have an immune system anymore.

“I went through all those surgeries for ulcerative colitis. My guys at Mayo have tried to get me to quit coaching for five years. They ask me what am I doing on buses? That’s where everybody gets sick. I just won’t give it up. They’re like, ‘dude, you have to get in your house and stay away from people.’ I’ve been on so many immunosuppressive drugs for the last 10 years that I just don’t have anything left.”

Neumann and the Marauders recently completed a school-record 22-win season with a trip to the Northern Sun Intercollegiate Conference tournament.

They had just begun spring activities when everything was shut down at a time when Neumann was feeling really good.

“My wife’s going crazy, saying ‘you’ve got to get home and quarantine because you can’t get this. You’re on a college campus and we can’t have you going down,'" Neumann said. “It’s been a personal struggle balancing the needs of my players and my family.”

Even former U-Mary coach Fred Fridley, who Neumann assisted before becoming head coach, advised him to get home.

“He was giving me a little heads up at State A, asking me ‘what the hell are you doing here. This thing’s going to go crazy, you got to get outta here.’”

Neumann’s health took a turn for the worse about 10 years ago on a road trip with Fridley and the Marauders. In August of that year he was hospitalized for a month, spending his third anniversary in a hospital bed.

Neumann and his wife celebrated the news they were going to have a baby.

“Later that night, I ended up in the ER. The following week I was in the hospital. I spent my third anniversary there,” he said.

Neumann weighed 180 pounds when he went into the hospital and came out at 119.

“All my organs were hooked up to machines,” Neumann recalled. “I wouldn’t let them hook me up during the day because I didn’t want my wife to know how sick I was. My heart was failing from working so hard and my lungs were failing. Everything was going downhill, then I got OK’d for a medicine that turned me around.”

“I was at my buddy’s 40th roast. I was the emcee. I drank too many beers and ate too many chicken wings and it put me in a flare up that I never got out of,” Neumann said. “Over the course of three years I had three surgeries to remove my colon. So I still have internal plumbing.”

Neumann said he feels bad for his graduated seniors.

“There were a couple years where I didn’t work that much. That’s what I told Cassie (Askvig) and Christal (Hearn) in the locker room, they didn’t sign up for a career where their first two years their coach could barely walk. I’m thankful for the University of Mary for sticking behind me.”

It’s paid off for both. And both want it to keep paying off, but it takes help from everyone.

“My immune system has been suppressed so much with all these steroids and stuff that I am in the major, major, major look out category for any virus. But this one for sure," Neumann said. “I’m not gonna lie. It’s a little scary, but there are people worse off than me.

"My last year has been the healthiest of my last five. When I’m fully healthy, I’ve never had a bad season as a head coach. I’m the healthiest I’ve been now. And things are back to where they should be, us near the top of the Northern Sun.”

Dan Seifert is a regular at state girls’ basketball tournaments, having coached teams to the big show in nine of the last 13 years, but never …

Things didn't quite work out for Davids Atelbauers at the University of North Dakota.

DALLAS - Mavericks owner Mark Cuban is hopeful the NBA will resume the 2019-20 season this summer. And he has a revolutionary idea that would increase stakes for playoff qualification. In a proposal Cuban has suggested to the league office, according to an ESPN report, the NBA would play five to seven regular-season games. Then the top 10 teams apiece in the Eastern and Western Conference ...

"The Last Dance" was superb entertainment - a 10-hour starburst of nostalgia that showcased the 1997-98 Chicago Bulls in general and iconic basketball player Michael Jordan in particular. But the series focused its Jordan-centric lens only through June 1998, when Jordan was 35 years old and once again standing at basketball's mountaintop. Jordan is 57 now. But the ESPN documentary only ...

What happened after 'The Last Dance'? A look back at the 1999 Bulls without Jordan, Pippen and Jackson.

CHICAGO - After the Bulls won their fifth NBA championship in 1997, Michael Jordan sat at the postgame news conference and fielded a question about a potential rebuild. "No one is guaranteed rebuilding in two, three or four years. The Cubs have been rebuilding for 42 years," he said, referencing their then-drought without a World Series appearance. A similar quip could be made about the Bulls ...

Bismarck High's Wilhelm says coaching honor's all about the kids

Jordan Wilhelm’s bet turned up all aces this season for the Bismarck High Demons.

'It's really cutthroat:' In a year harder than most to make a WNBA roster, rookies contemplate next steps after being cut, deciding to sit out or making a team

Even after getting drafted by the Chicago Sky in April, Kiah Gillespie was aware of how difficult it was going to be to make a WNBA roster. That's why when the opportunity arose for her to sit out the 2020 season and try for a spot on the Sky in 2021, she felt like that was her best move.