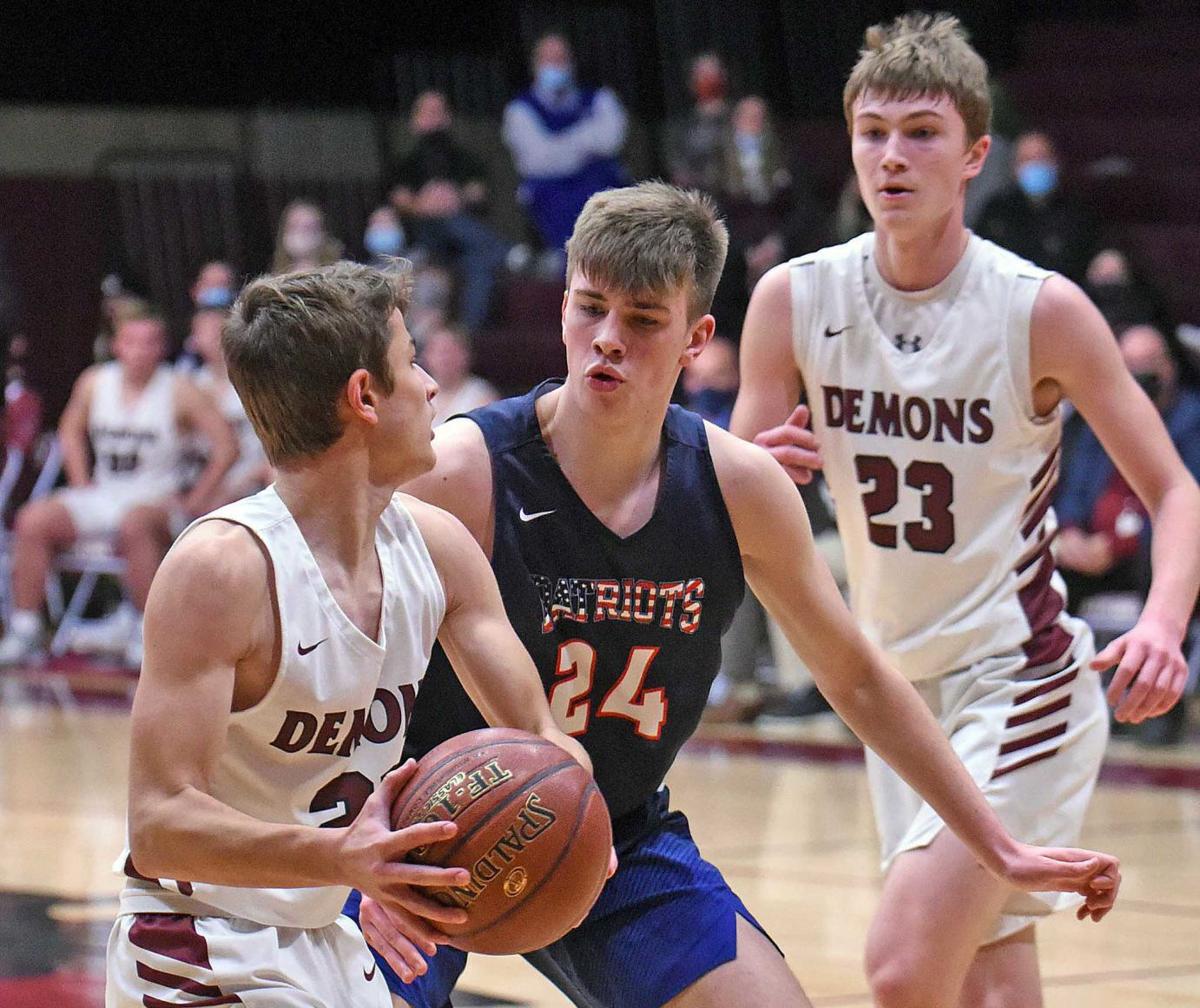 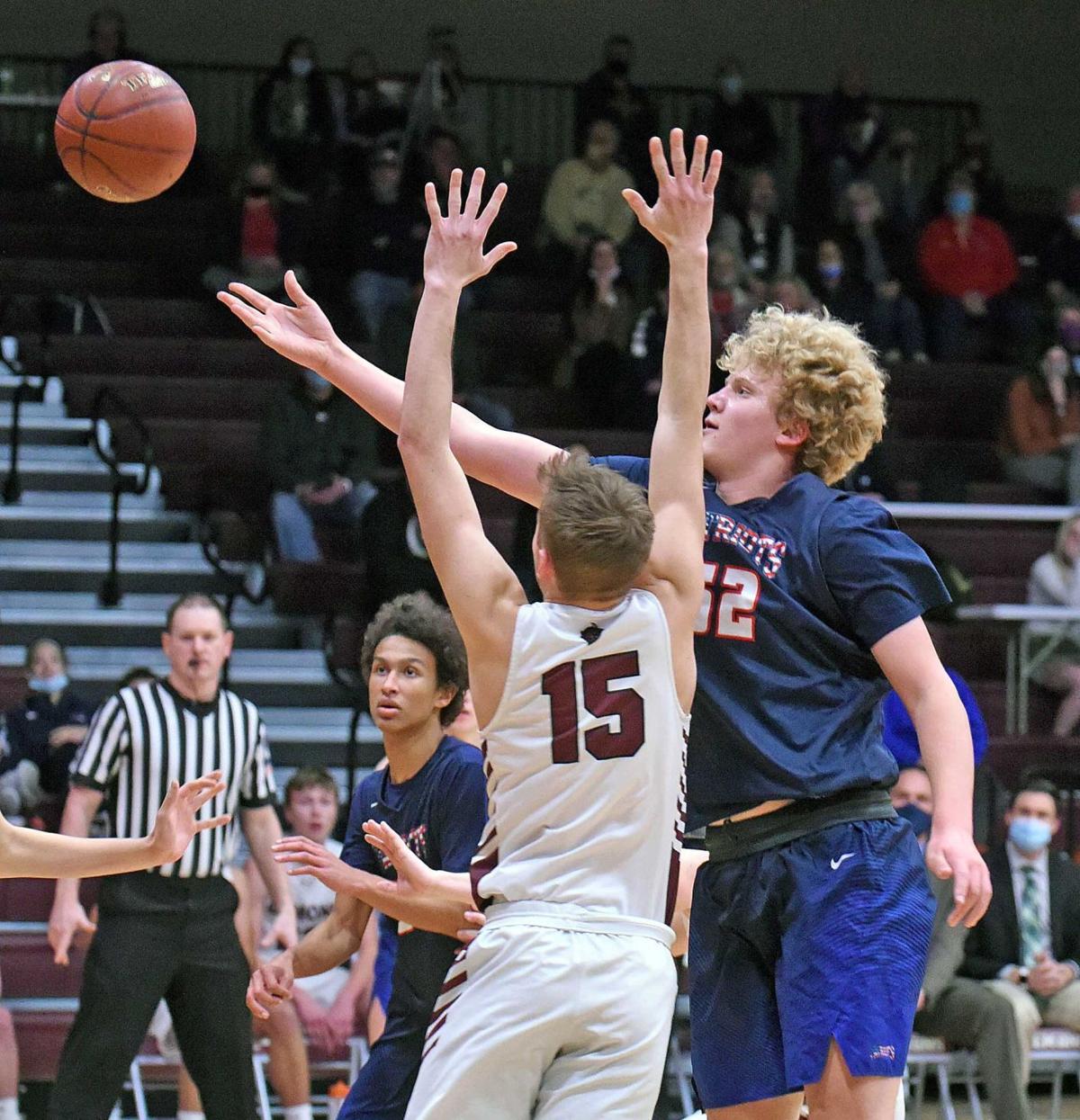 In the blink of an eye, a 20-point deficit disappeared.

Bismarck shook off a rough first half and dominated the final 18 minutes to post a come-from-way-behind 82-71 win over Century on Tuesday night at Karlgaard Gymnasium.

The Patriots jumped all over the Demons early, leading throughout the first half and holding an 18-point lead at the break (47-29).

“Our message to the guys is, it doesn’t matter what the scoreboard is, that you need to continue to trust the system and trust what we’ve worked on all year and that it’s going to work,” Demons coach Jordan Wilhelm said.

A Noah Fosland basket right out of the intermission pushed the Patriots’ lead to 49-29.

But the Demons turned things around in a hurry.

“Our energy wasn’t great in the first half,” Wilhelm said. “We made no shots in the first half. Their zone made us take a step back again and what happened is at halftime our guys decided let’s just play basketball. And they continued to trust the system and they continued to trust what we’ve been preaching to them for the last two years and eventually when you keep making those subs, and you stay fresh and you keep putting it on teams eventually your goal is to crack teams. And hats off to Century, for a young team and an inexperienced team, they really came ready to battle today.

Treysen Eaglestaff, who hit four of Bismarck’s 11 3-pointers in the game, sank three in the second half, including bombs that gave BHS the lead at 52-51, and gave the Demons the lead for good at 55-54 after Century had stopped the drought and regained the lead briefly on an Isaiah Schafer 3-pointer.

“Basketball is a lot easier when you’re making shots,” Wilhelm said. “The problem is, as a coach you want your guys to play with the same energy and intensity when they’re not making shots.

“The problem was we were 3-for-25 on threes in the first half and something like 8-for-17 in the second half and it makes sense why you’re playing with more energy. We need to get to a point where we can play with that same energy and intensity for 36 minutes even when shots aren’t falling.”

The Patriots battled back, pulling within five points at 75-70 with just under three minutes to go but could get no closer.

“Century is a good team. They have size and they have talent and guys that can make shots from all over the place,” Wilhelm said. “We knew we were going to have our hands full. And any time you get that crosstown rivalry you know it’s going to be a tough game and it’s going to be right down to the last possession.

“The biggest thing I’m proud of tonight is our guys didn’t bat an eye when they were down 20. They didn’t worry about it, they stuck to the system, they trusted themselves and eventually they found themselves right back in the game and with a huge victory.”

“We had a lot of guys step up and that’s what made the 2020 team special last year was you never knew who it was going to be on different nights,” Wilhelm said. “You need to trust all 12 guys that you put on the court and sometimes it’s easier said than done but we don’t play guys, we don’t put guys in the game unless we really trust them. And tonight we played 11 guys and I think all of them contributed at different times of the game.”

Bismarck travels to Minot on Friday for a 7:30 p.m. contest. Century hosts St. Mary’s at 5 p.m. on Saturday.

Lisa Jenkins had a front-row seat to watch one of her school records fall.

Several high school games scheduled for Thursday have been postponed due to difficult travel conditions caused by the extreme wind.

Lisa Jenkins had a front-row seat to watch one of her school records fall.

Trever Kaiser and Matthew Kreklow powered the University of Mary to a victory over St. Cloud State on Saturday.

Grammys opened with a musical tribute to Kobe Bryant

Grammys opened with a musical tribute to Kobe Bryant