Become a Member
Read Today's E-edition
Share This
No. 1 Century churns out win over Legacy in defensive battle
0 Comments
Share this 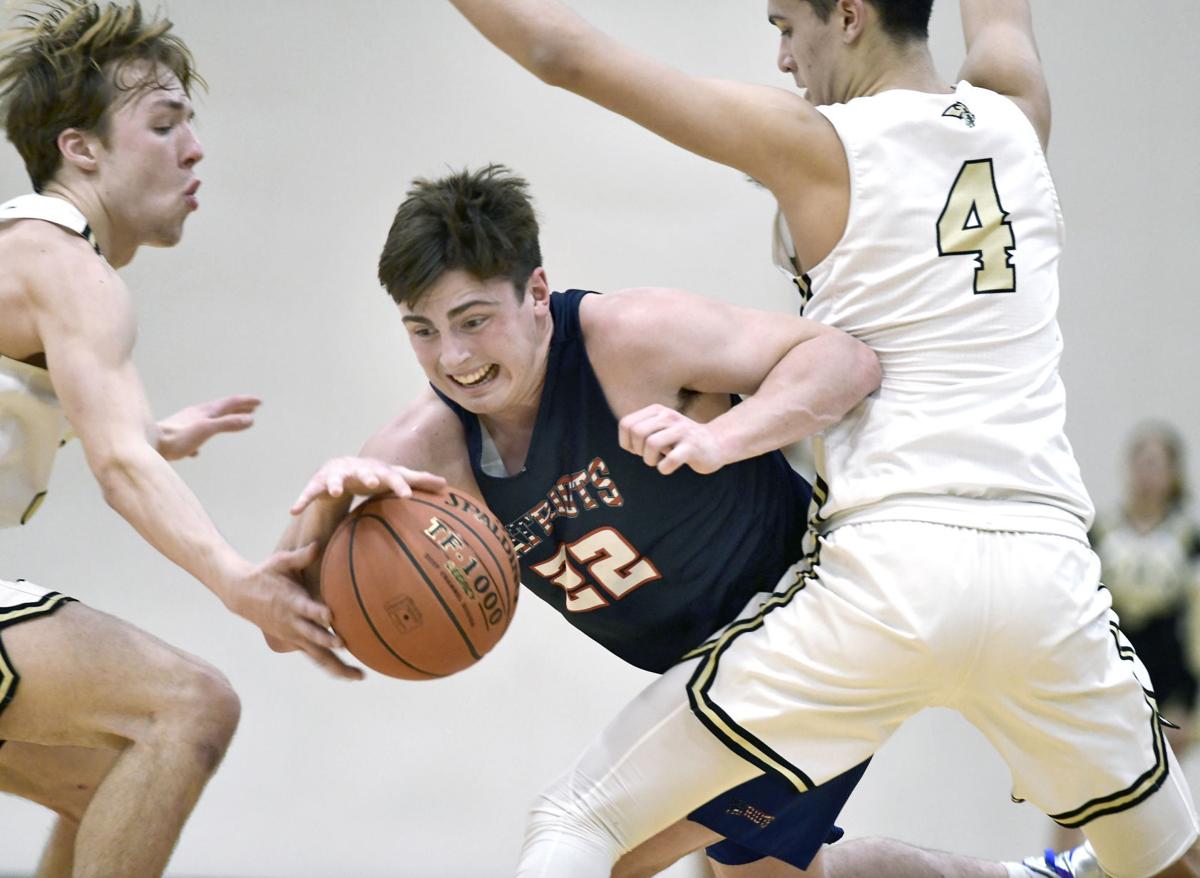 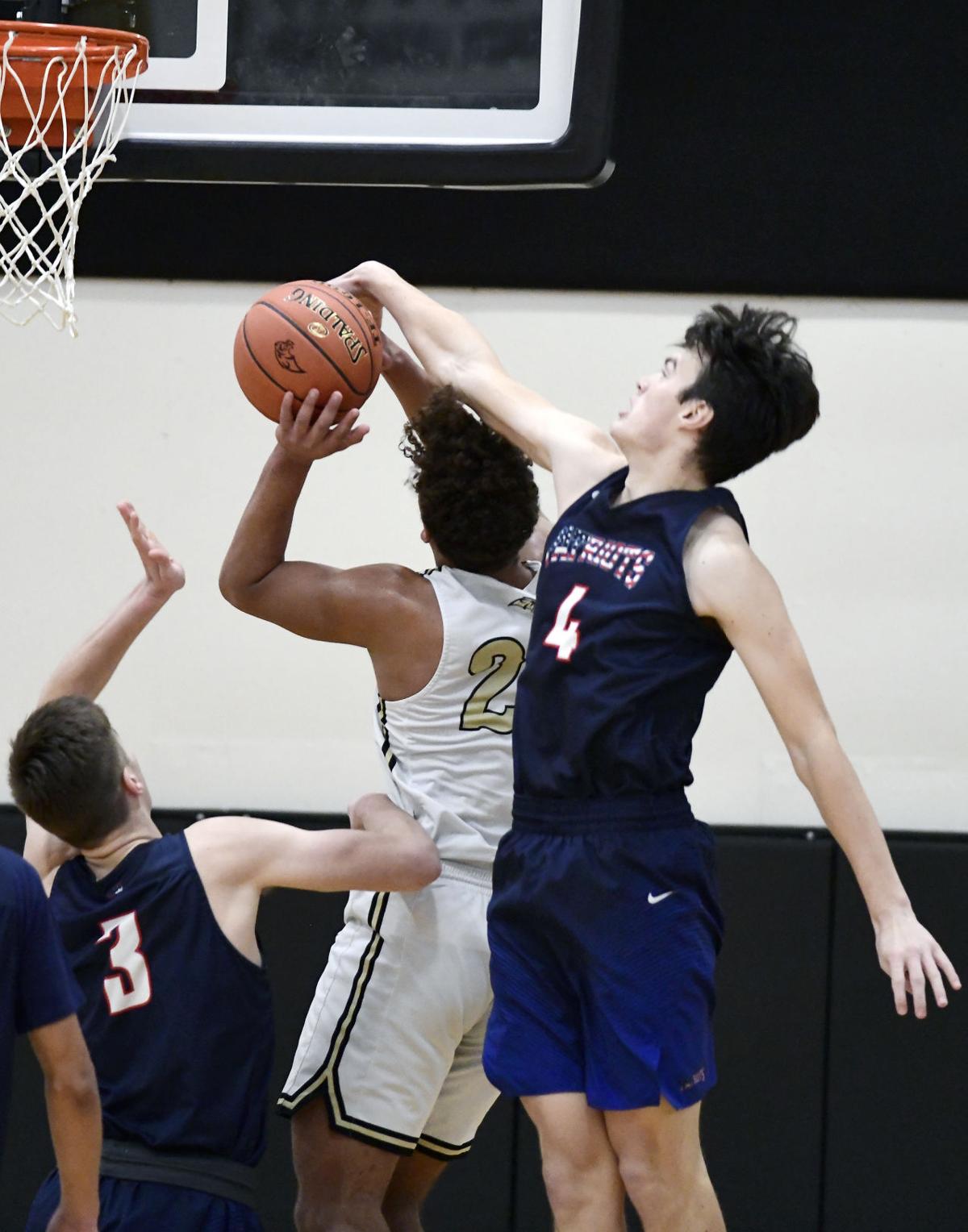 Legacy's Jaxon Kellogg, middle, has his shot blocked by Century's Connor Trahan (4) in the second half of Thursday night's game. Providing defense to the left is teammate Anthony Doppler (3).

Averaging 87 points per game, defense provided the path to victory for the  Patriots in a hard-fought 58-49 win over Legacy inside Haussler Gymnasium.

Isaiah Schafer, just a sophomore, pumped in 20 points -- right at his average -- as points were hard to come by for both teams.

"We knew it'd be tough, for sure," Schafer said. "Legacy's a good team, but we're happy to get out of here with a win."

Darin Mattern, Century head coach, really liked his team's defense. The 17 turnovers, however, were another matter.

"Defensively, I was very happy. Anytime you can hold a team in our league in the 40s in their own building, you'll take that," Mattern said. "But I was really disappointed with how we took care of the basketball. We gotta clean that up or we're not going to get any better."

Legacy was coming off quality wins over St. Mary's and Legacy. The Sabers showed plenty of grit against the state's top-ranked team. Legacy scored just three points in the first nine minutes of the game and trailed 41-26 with 11 minutes left.

However, the Sabers slowly chipped away and had the deficit down to 52-46 with 3:30 left. They appeared to have a chance to get even closer, but a long rebound took a funny bounce on a missed 3-pointer by Century. Ryan Erikson was there for the stick-back to push the lead back to eight.

"It was really fun to watch our kids fight back against the No. 1 team in the state. I think that's an area where we've improved, just to keep our heads down and continue to plug away," Legacy head coach Jason Horner said. "We wanted to win the game. We're disappointed certainly, but to see the competitive spirit our kids played with tonight was very encouraging."

It was an uphill fight all night for the Sabers.

Century led 17-8 on a hoop by Erikson and 26-18 just before half, but buckets by Zander Albers and Brett LaCombe had the deficit down to 26-21 at the break.

Century scored eight of the first 10 after the intermission to push the lead to 34-23, but the Patriots were unable to deliver the knockout blow.

"We have to do a better job of taking care of the basketball. Right now, we're a high-risk basketball team and I have a hard time with that because I understand the importance of each possession in a basketball game," Mattern said.

Schafer said the message has been sent loud and clear.

"We're turning the ball over too much," he said. "We know it and it's just a matter of taking care of the ball better."

Neither team allowed many, if any, easy baskets. Zander's steal and two-handed slam in the second half was one of the few.

"They're so good, so big, to look up and keep that team in the 50s, yeah, we're proud of our kids for the way they competed defensively," Horner said. "Offensively, we've had good moments this season, but we've been a little inconsistent at times, kind of like how we were at the start of the game tonight. We had a few turnovers where we were trying to do a little bit too much. I thought we settled in as the game went on and we had some good looks that typically I think we'll knock down, but tonight, they didn't fall."

Jaxon Kellogg came off the bench to lead the Sabers with 14 points. Albers and Chase Knoll added eight each.

Century, which improved to 9-1, has a challenging week ahead with games against No. 2 Minot (8-1) on Tuesday and fourth-ranked Bismarck (6-1) on Jan. 21. The Demons are the only team to beat Century this season.

"We're going to enjoy this one tonight because any road win in our league is a good win. Legacy's a tough, scrappy team," Mattern said. "We have two really big games coming up against great teams. It's exciting, but we have some stuff we need to focus on here over the next couple of days."

Legacy (5-5) has a tough week coming up as well, playing at BHS Tuesday before hosting St. Mary's Friday.

"Playing with this type of effort and this type of energy, that's what's going to allow us to be successful," Horner said. "There have been years where we get down 15 to Century and I'm not sure we fight back like we did tonight. For this team, that needs to be our identity and despite the final result, this was a step in the right direction for us."

Game No. 2 between Century and Bismarck was nearly as good as the first. End result was different this time, though.

Legacy's Jaxon Kellogg, middle, has his shot blocked by Century's Connor Trahan (4) in the second half of Thursday night's game. Providing defense to the left is teammate Anthony Doppler (3).