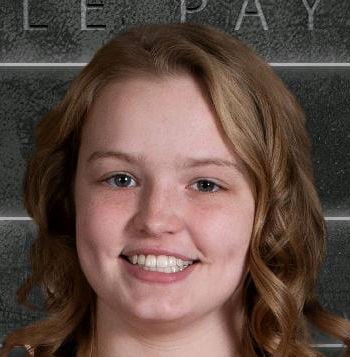 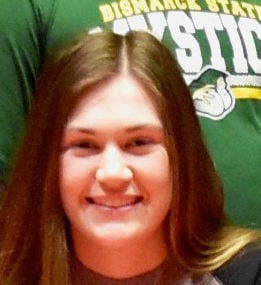 Miss Basketball award winner Reile Payne has signed a letter of intent to attend Bismarck State College, where she intends to play basketball and volleyball.

The 5-foot-9 Payne was a standout in the fall and winter. As a volleyball player she earned first-team all-state recognition as a senior and was a finalist for the state senior athlete of the year award.

She was named Miss Basketball on the strength of all-around play -- 21 points, 11 rebounds, four assists and six steals per game. She is a three-time all-state honoree.

BSC head basketball coach Thai Haggin regards Payne as a valuable addition on multiple levels -- for her play on both ends of the basketball court and her leadership ability in both sports.

Payne was joined in her volleyball commitment by Greta Gibson, a 5-9 middle hitter from Central Cass in Casselton.

Ida Narbuvoll from the University of Mary track and field team is one of three finalists for the U.S. Track & Field and Cross Country Coaches Association’s 2020 NCAA Division II indoor track athlete of the year.

Additionally, Marauders’ head coach Dennis Narbuvoll is a finalist for the USTFCCCA coach of the year award.

Narbuvoll won Northern Sun Intercollegiate Conference championships in the mile, 3,000- and 5,000-meter runs. She ranked second in D-II in the 3K and 5K and fifth in the mile. The award winner will be announced on Wednesday.

Newell led the Marauders to a third-straight NSIC indoor title and No. 6 ranking in the country. U-Mary had eight athletes qualified for the national indoor meet in seven events before it was canceled. The coach of the year award will be announced on Friday.

The University of Mary has announced the signing of seven recruits for the women's soccer program.

Among the players are three transfers, who will be juniors at U-Mary. They are defenders Halle Nottage and Kaiya Denis and midfielder Breanna Kuni, all from Peninsula College of Port Angeles, Wash.

Denis and Nottage were defenders on a Peninsula team that allowed just 0.39 goals per game on the way to a 21-1 season and won the Northwest Athletic Conference championship as freshmen. Kuni also played for the Pirates the last two seasons.

Allickson earned six soccer letters and was named the all-region team at Mandan High School. She is the third player from Mandan's class of 2020 to sign with U-Mary.

Graczyk was a second-team All-Pacific League player at Classical Academy High school and the offensive player of the year as a sophomore.

U-Mary now has 11 new players who have committed to the school for the 2020 season.

Two Minot State wrestlers and one University of Mary athlete have been named to the Northern Sun all-conference team.

Minot 125-pounder Dean Arevalo, a senior, was named to the first team.

Former Bismarck Bobcats goalie Hunter Shepard has repeated as the National Collegiate Hockey Conference for the second straight season, following up his third straight appearance on the NCHC all-conference team.

Shepard, a Minnesota-Duluth senior, has earned first-team All-NCHC the last two seasons after making the second team as a sophomore. On the season he had a 22-10-2 record, while posting a 2.18 goals-against average and a .918 save percentage. He was named NCHC goaltender of the week seven times.

In 2016, Shepard was the North American Hockey League goaltender of the year.

Poolman, who has signed with the Calgary Flames. He contributed to a UND defense that led the conference with a 2.04 goals-against average in league play and was a member of a penalty-kill unit that fashioned a 86.9 kill rate. Tucker Poolman, Colton's older brother, won the defensive defenseman award three years earlier while playing for UND.

Gibson played as a 5-foot-9 middle hitter for the Squirrels.

The talent pool was deep and thick. So there's no doubt about the abilities of the five boys who bubbled to the top during the North Dakota Cl…

The state's media selected a different-looking girls Class A all-state basketball team this year. Some of the offensive thunder that typified…

Seniors were ill-served on last year's state Class B girls basketball team, so it's not surprising that this year's team reads like a rerun.

For Kelsey Peltier, the script got flipped pretty quickly.

It was a talk Brad Miller was totally unprepared to give.

For all the individual awards, and there were a bunch of them, Cassie Askvig just wanted to win.

Much to the Standing Rock basketball team's delight, three-point baskets and turnover-inducing defense have the potential to turn games around.