After two tough losses, youthful Patriots power past Dickinson
Share this
{{featured_button_text}}
1 of 2 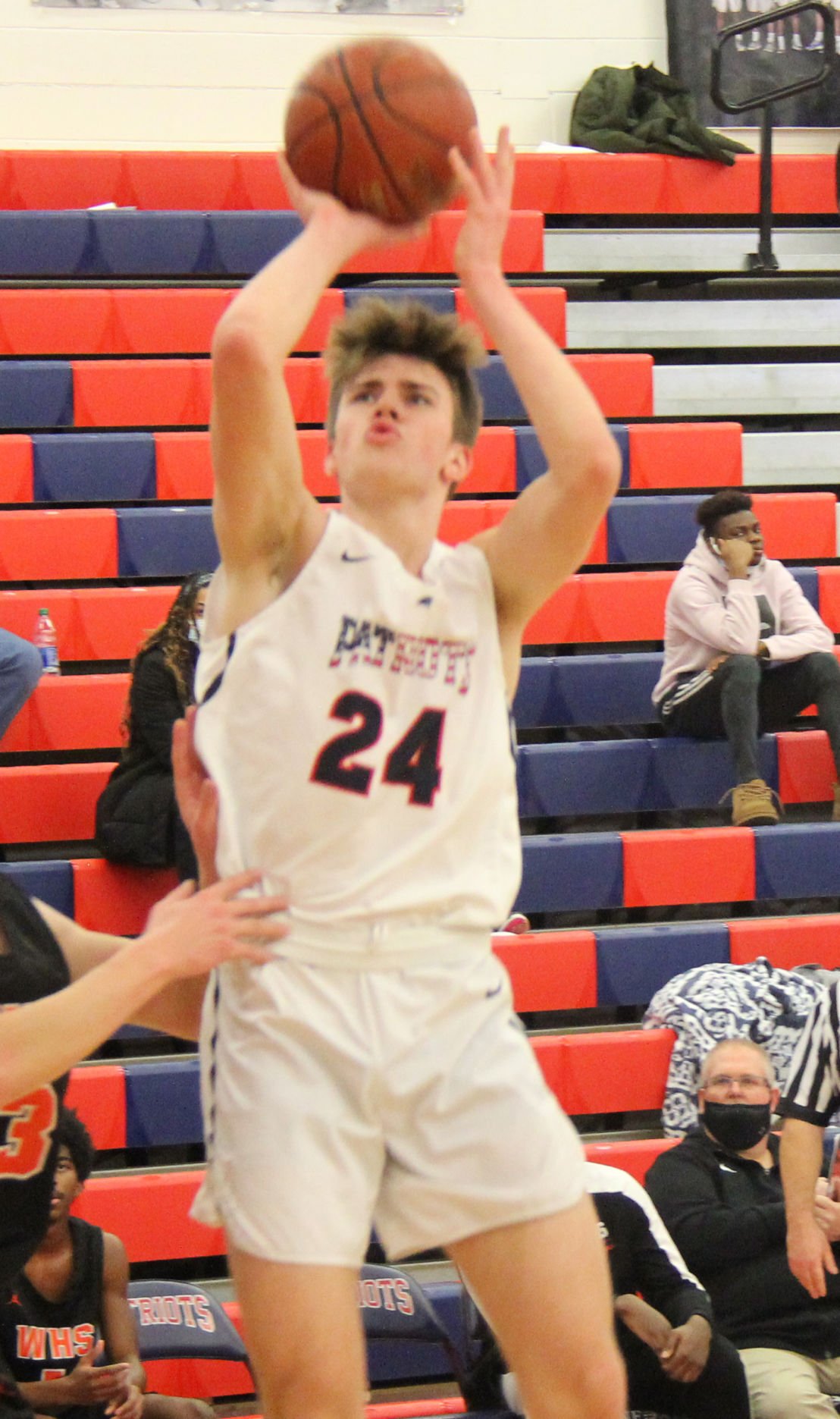 Century's Anthony Doppler goes up for a shot during West Region basketball action at Olson Gym in Bismarck.

Alex Dvorak scored 21 points, 19 in the second half, to lead Dickinson in Monday night's game against Century.

Sophomore Ryan Erikson came up three blocks short of a triple double for Century and the Patriots got double-figure scoring games from fellow 10th-grader Anthony Doppler and freshman Isaiah Schafer in an 86-51 win over Dickinson. The Midgets were led by sophomore Alex Dvorak's game-high 21 points, 19 in the second half.

It was a strong bounce-back performance for the youthful Patriots after narrow losses last week to No. 5 Jamestown and 13-4 Legacy.

Erikson, who posted a line of 20 points, 12 rebounds and 7 blocked shots, said age can't be a crutch.

"I don't like using being young as an excuse. We've been playing together a long time. Like coach (Mattern) says, it comes down to execution," the 6-foot-9 post said. "For us, we just need to keep working hard every day, don't take possessions off and make sure we're not taking games for granted because some day they're going to be gone."

Century, which improved to 10-7 with the win heading into tonight's game at St. Mary's, held Dickinson to 20 first-half points. The Midgets scored 88 in a game at conference heavyweight Bismarck High on Feb. 5.

"I thought defensively this was our best all-around performance," Century head coach Darin Mattern said. "A big part of that is the communication you need to have defensively. Another part is winning your individual matchup. I thought for the most part we were locked in defensively tonight. Now, let's see if we can take that and carry it over tomorrow at St. Mary's. For us, that's what we need on a game in and game out basis. Just that consistent overall effort, but definitely tonight I was really proud of the way the kids defended."

Tied 6-all early, Century ran off 12 straight points to go up by double figures. The lead stayed there the rest of the game.

Schafer knocked down a 3-pointer in the run. So did Erikson. Schafer finished with 15 points.

"I think we do have an unselfish team where we're always trying to get each other going," Erikson said. "Whoever has it going, we're going to try to get them the ball."

Doppler pumped in 17 points for Century, which also got good production off the bench with 33 points. Connor Trahan, a 6-4 junior, knocked down two 3-pointers and had eight points.

Century figures to be a handful come postseason time. Between their size, skill and Mattern's ability to put it all together come when it matters most, the Patriots figure to be a tough out.

"We knew with our youth we were going to have some growing pains. The WDA is always a senior-dominated league, but I feel like we're playing pretty good basketball right now," Mattern said. "The biggest thing for us is putting an emphasis on finishing. Finishing possessions and finishing games. We felt like we've left a few opportunities out there and that's not to take anything away from the other teams. In those games, they made more winning plays than we did."

After tonight, Century still has tough games left at Mandan on Friday and a road trip to No. 2 Minot on Feb. 23.

"You look at it and so many of these games come down to one or two possessions," Mattern said. "It is about who makes the winning plays -- diving on the floor for a loose ball, a free throw block out, a big defensive rebound. We've had times where we've done those things, but just not consistently enough if you're going to have success in this league.

"That's where we're at right now with our basketball team. We're showing some really good things, but finishing and really stressing those winning plays are a big emphasis in our camp."

Erikson is hoping the Patriots can build off Monday's decisive victory.

"We've had some ups and downs this season, but you can't let it affect your play and how hard you work," he said. "Definitely Tuesday and Friday left a sour taste in our mouth, but we came back and worked hard tonight and got the win."

Garrison's youth is served in quarterfinal round of Region 5 tournament

In its only previous meeting of the year, New Salem-Almont trounced Grant County 67-27.

Century's boys basketball game against Minot on Tuesday has been canceled for COVID-19 related reasons within the Patriots program.

Lowman pours in 38 points to lead Mandan over Bismarck High

Jayce Lowman sank five 3-pointers and scored 15 points in the first half.

Minot State has been at home on the road this season.

Century's Anthony Doppler goes up for a shot during West Region basketball action at Olson Gym in Bismarck.

Alex Dvorak scored 21 points, 19 in the second half, to lead Dickinson in Monday night's game against Century.