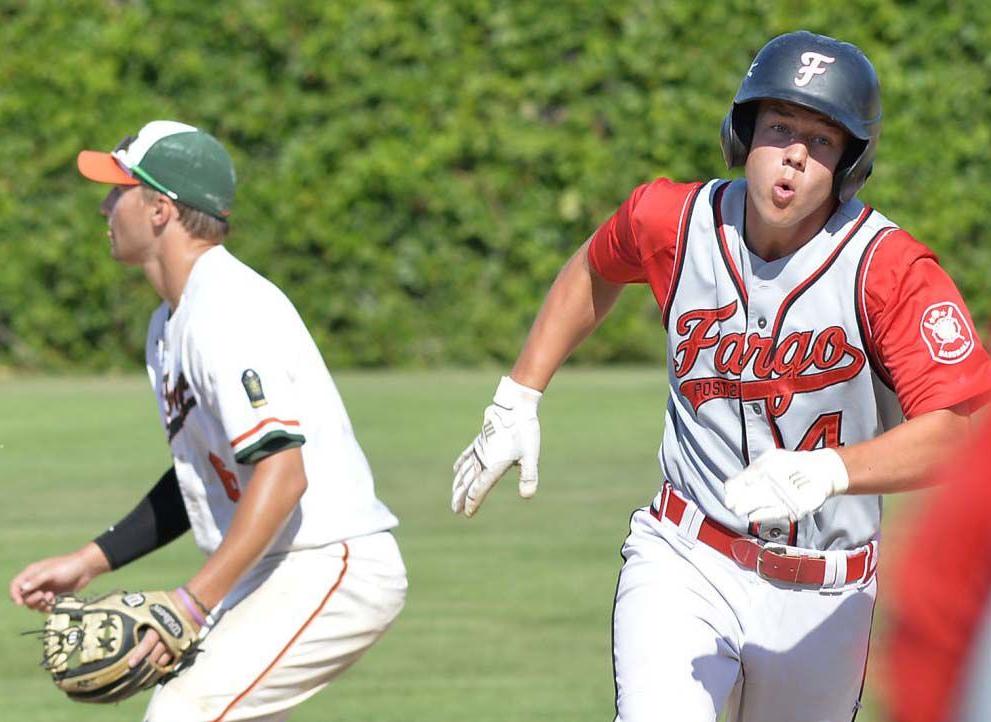 Fargo Post 2's Zach Kluvers heads for third after hitting a triple and driving in a run in the second inning against West Fargo on Friday. Waiting for the ball is West Fargo second baseman Brayden Jacobson. 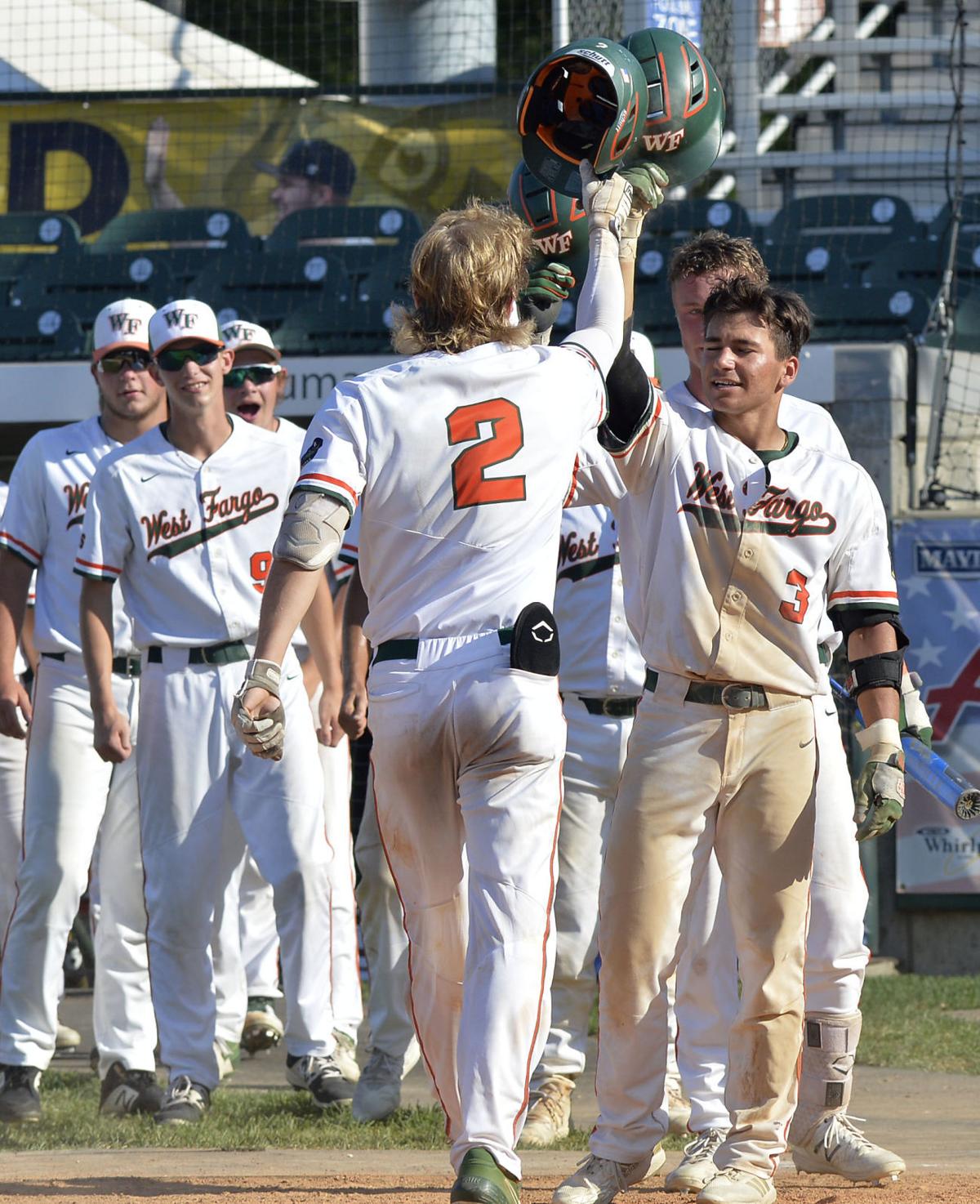 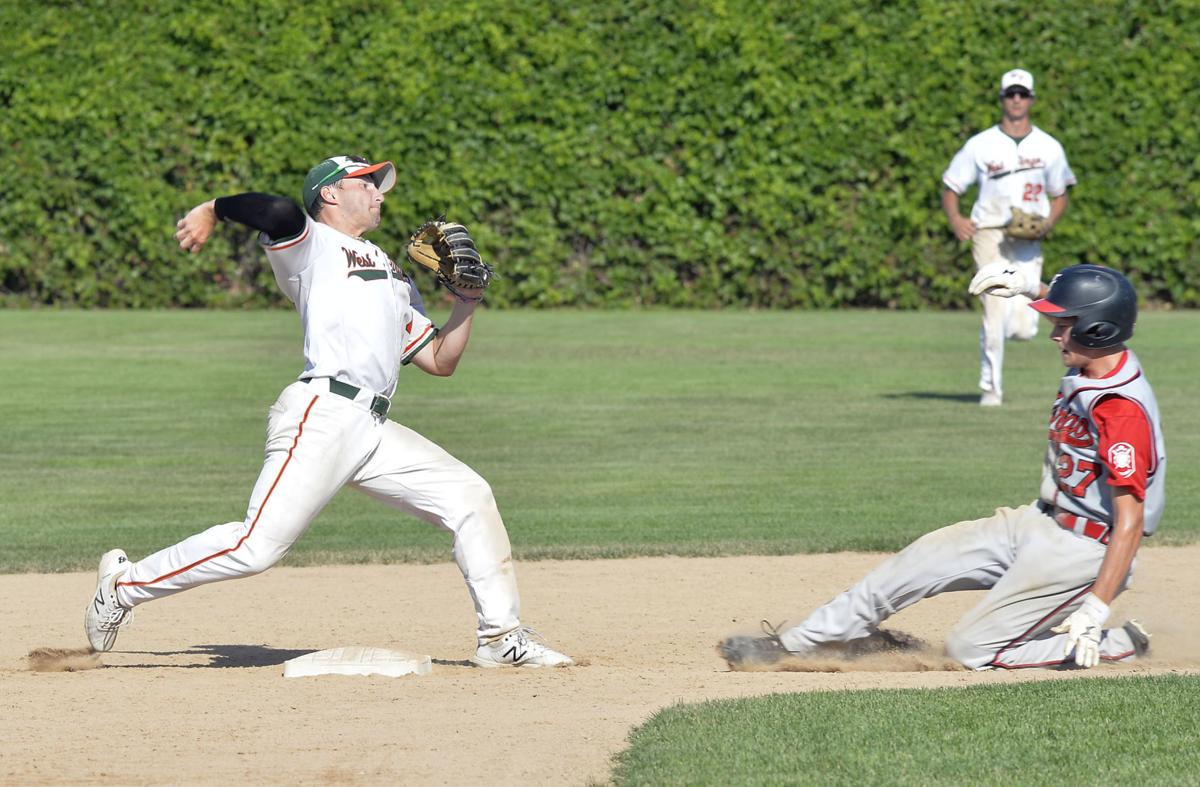 West Fargo's Brayden Jacobson throws over to first for a double play in the fourth against Fargo. Sliding into second is Mike Hallquist.

Fargo Post 2, the defending champion with a 42-4 record and 10 straight wins loomed just ahead. Post 2 had won three of four encounters between the two teams this season.

West Fargo catcher Dustin Mertz drew on the "respect all, fear none" theme.

"Most of these guys have three years coming back, me being four," he said. "When the moment gets big we tend to slow things down and play our game."

After a bleak start, the Patriots overtook Post 2 by a 5-4 margin Friday night at Municipal Ballpark.

With the victory, West Fargo averted elimination and earned a shot at a state title today.

The Patriots will tangle with Bismarck at noon with the survivor of that game getting a shot at Post 2 in a 3 p.m. contest for all the marbles.

Patriots starter Nolan Dodds lasted only one inning as Post 2 roughed him up for two runs, one unearned. Cole Hage doubled in the bottom of the first inning and scored on an ensuing triple by Zach Kluvers. Kluvers later scored an unearned run on an infield error.

Post 2 starter Andrew Linn exited in the first inning after walking three West Fargo batters. Reliever Tyler Thrash kept the Patriots at bay until the fourth inning when Mertz launched a first-pitch, two-run home run over the 340-foot sign in left field to knot the score.

"I'd seen (Thrash) one at-bat before, so I knew he likes to spin a lot, so I took advantage of a high curveball," said Mertz, who has five round-trippers on the year.

Post 2 answered in the bottom of the fourth with a pair of singles and a sacrifice fly by Caden Hadlee that scored Drew Sandy.

The Patriots won the game by pecking away with single runs in the fifth, sixth and seventh.

Ryan Reynolds walked and scored on a double play in the fifth. Mertz singled in the sixth and came all the way around to score when Alex Urlaub's single got past Hadlee, the center fielder, for a costly error.

Reynolds walked to start the seventh and eventually scored as Post 2 turned another double play.

Fargo, down 5-3, sprang to life in the bottom of the seventh as Hallquist opened with a triple and scored on a ground out. Oster then walked Daniel Boutain and surrendered a single to Jace Drew.

Coach Jordan Rheault then called on Jacobson, who moved from second base to the mound. Jacobson walked Hage before fanning Kluvers and retiring Drew Sandy on a fly ball to earn a save.

"They're the best ballclub we've faced. ... We did the little things right tonight and managed to squeak by. We're ready to play two tomorrow," he observed.

Marauders come up short on home court against Bemidji State

Hendriks has full no-trade this year, then limited provision

CHICAGO (AP) — Liam Hendriks has a full no-trade provision through October in his $54 million, three-year contract with the Chicago White Sox.

MINNEAPOLIS (AP) — The Minnesota Twins and veteran starting pitcher J.A. Happ agreed Wednesday to an $8 million, one-year contract, according to a person with knowledge of the deal.

Zimmerman seals deal with Nats, says might not be last year

WASHINGTON (AP) — Now that he’s set to play for the Washington Nationals this season, Ryan Zimmerman might stick around a little longer, too.

Aaron lauded for grace amid racism during home run pursuit

Reaction to Hank Aaron's death from former presidents to fellow Hall of Famers to everyone who knew him followed a theme: how the one-time home run king handled the racism he faced on the way to passing Babe Ruth's hallowed record nearly 50 years ago.

ATLANTA (AP) — As his adopted hometown mourned Hank Aaron's death, some fans called on the Atlanta Braves to change their name to the Hammers in his honor.

MINNEAPOLIS (AP) — J.A. Happ won a World Series with Philadelphia in 2008 and returned to the final round with the Phillies the following season, but he hasn't been back since.

Fargo Post 2's Zach Kluvers heads for third after hitting a triple and driving in a run in the second inning against West Fargo on Friday. Waiting for the ball is West Fargo second baseman Brayden Jacobson.

West Fargo's Brayden Jacobson throws over to first for a double play in the fourth against Fargo. Sliding into second is Mike Hallquist.