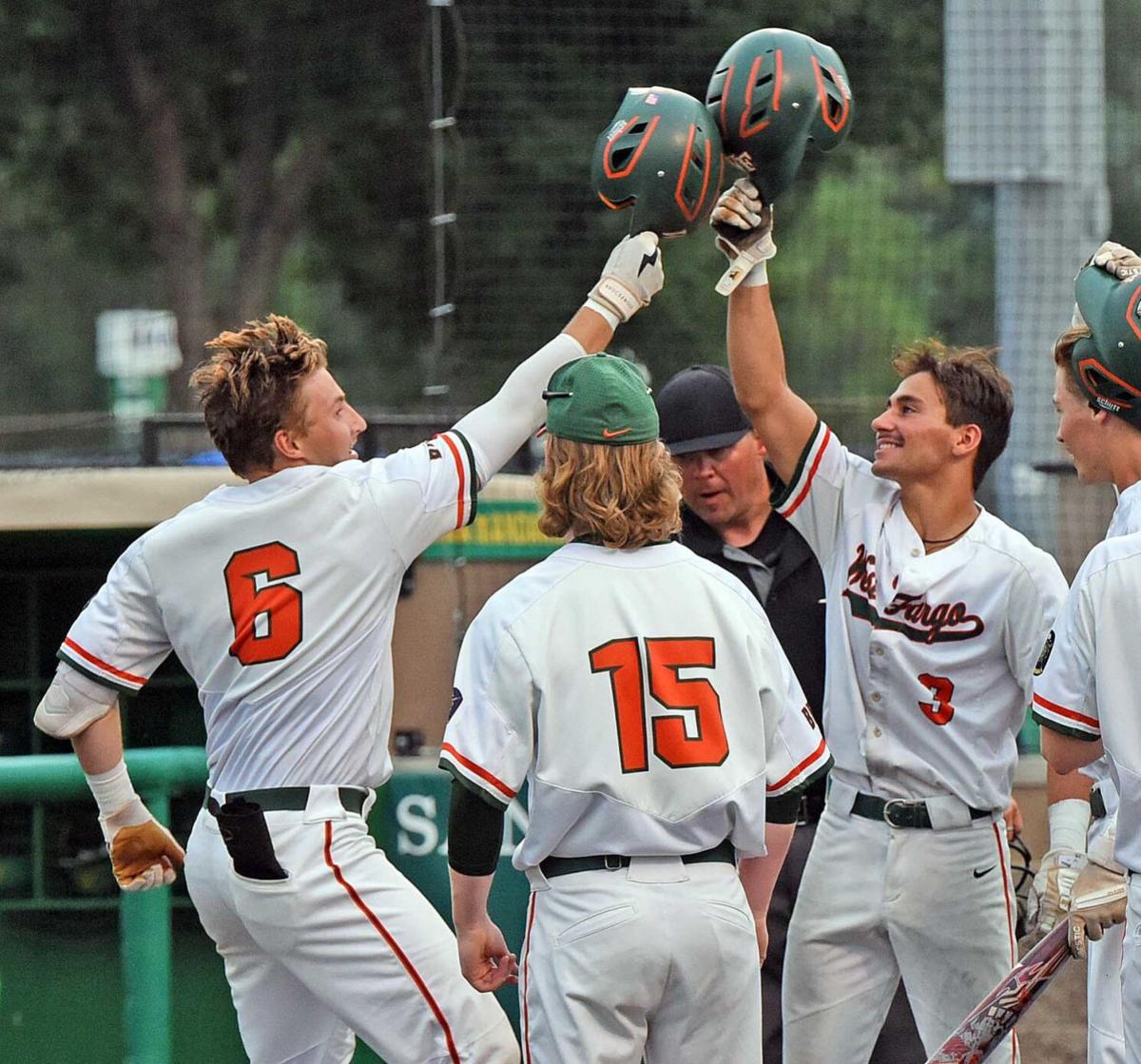 Less than two months after steamrolling to a state Class A high school baseball championship in Mandan, the boys from West Fargo were at it again on Tuesday.

The bottom half of the lineup carried the day as the West Fargo Patriots roughed up host team Mandan 12-2 in the first round of the state Class AA Legion Baseball Tournament at Memorial Ballpark.

Brayden Jacobson ended the game early with a three-run homer in the bottom of the fifth.

“I thought our pitchers made good pitches that they put good swings on,” Mandan coach Jake Kincaid said. “They’re a team that you just can’t make any mistakes against.”

West Fargo starting pitcher Brennan Haman, third baseman Evan Berg and second baseman and pitcher Anthony Villanueva did most of the damage in the sixth, seventh and eighth spots in the batting order. They combined to go 6-for-8 with two doubles, six runs scored and two runs batted in.

Haman and Villanueva combined on a six-hitter. Haman gave up just three singles and struck out seven over three innings to get the win. He left after throwing 59 pitches. Villanueva worked the fourth and fifth in relief.

It took an inning for the Patriots’ offense to wake up. When it did, there was no stopping them.

Lance Oster had a double and drove in three runs. Jacobson’s only hit of the game came off Mandan’s third pitcher of the night, Seth Arenz.

“Anytime in a state tournament we win by one or more, it went our way,” Rheault said. “I know in certain situations you want to win by 10, get your pitcher out early and advance.”

Mandan’s only lead came in the second inning. Seth Arenz opened the inning with a single to right-center and stole second. Haman struck out the next two batters looking before Chiefs left fielder Anthony Johnson singled to drive in Arenz.

Isaac Huettl walked and Avery Bogner was hit by a pitch to load the bases. But Haman got Brayden Bunnell on a soft fly to second to end the threat. The Chiefs left five runners on base in the first two innings.

Singles by Drew Clouse, Berg and Villanueva, and a fielder’s choice, filled the bases in the second. Arenz walked Quade Peters to force in a run and Oster followed with a hard double just inside the third-base line that brought home three runs.

Mandan stranded three runners again in the fifth. Seth Arenz’s single plated Bogner, who had walked to open the inning, with the Chiefs’ final run.

“I liked our effort. Against a team like that, it just wasn’t enough,” Kincaid said.

Is Sean Payton an early frontrunner for Coach of the Year?

MINNEAPOLIS (AP) — Triston McKenzie was sent to Triple-A four times this season, as the lanky 24-year-old worked through some early struggles.

LEADING OFF: Angels' Ohtani might not pitch again this year

A look at what's happening around the majors on Friday:

Howard expected to start as Rangers host the White Sox

ARLINGTON, Texas (AP) — Carlos Correa and the Houston Astros are closing in on another AL West title after dominating their last-place Texas rival again.

Jefferies scheduled to start for Oakland against Los Angeles

Civale expected to start for the Indians against Yankees