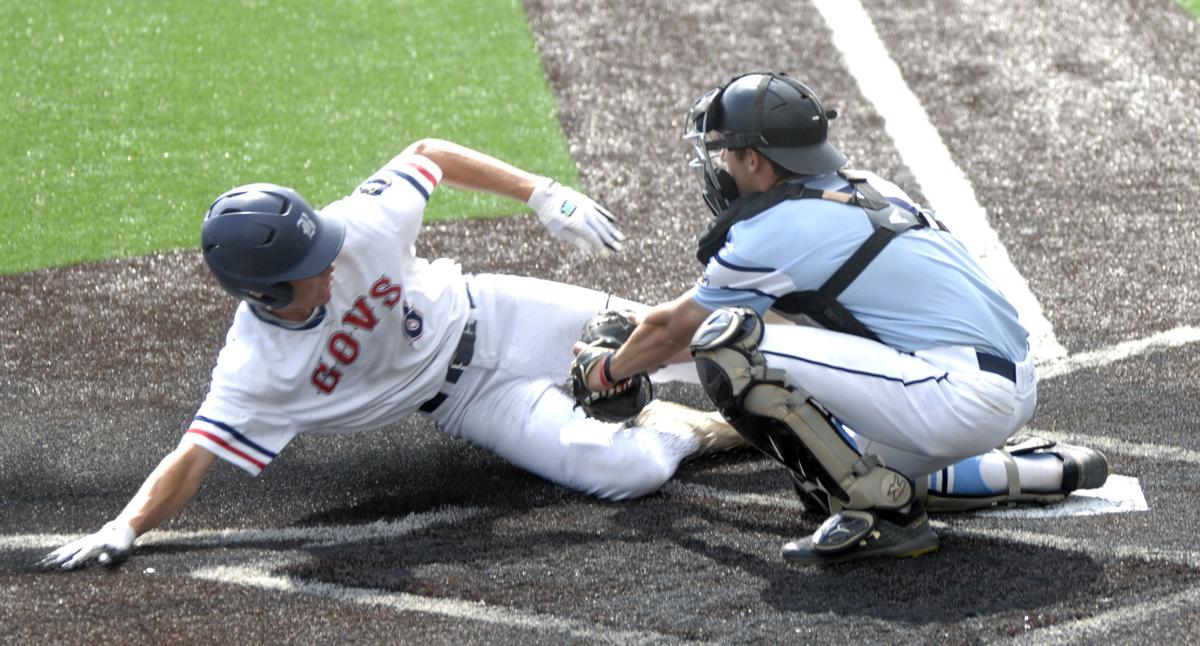 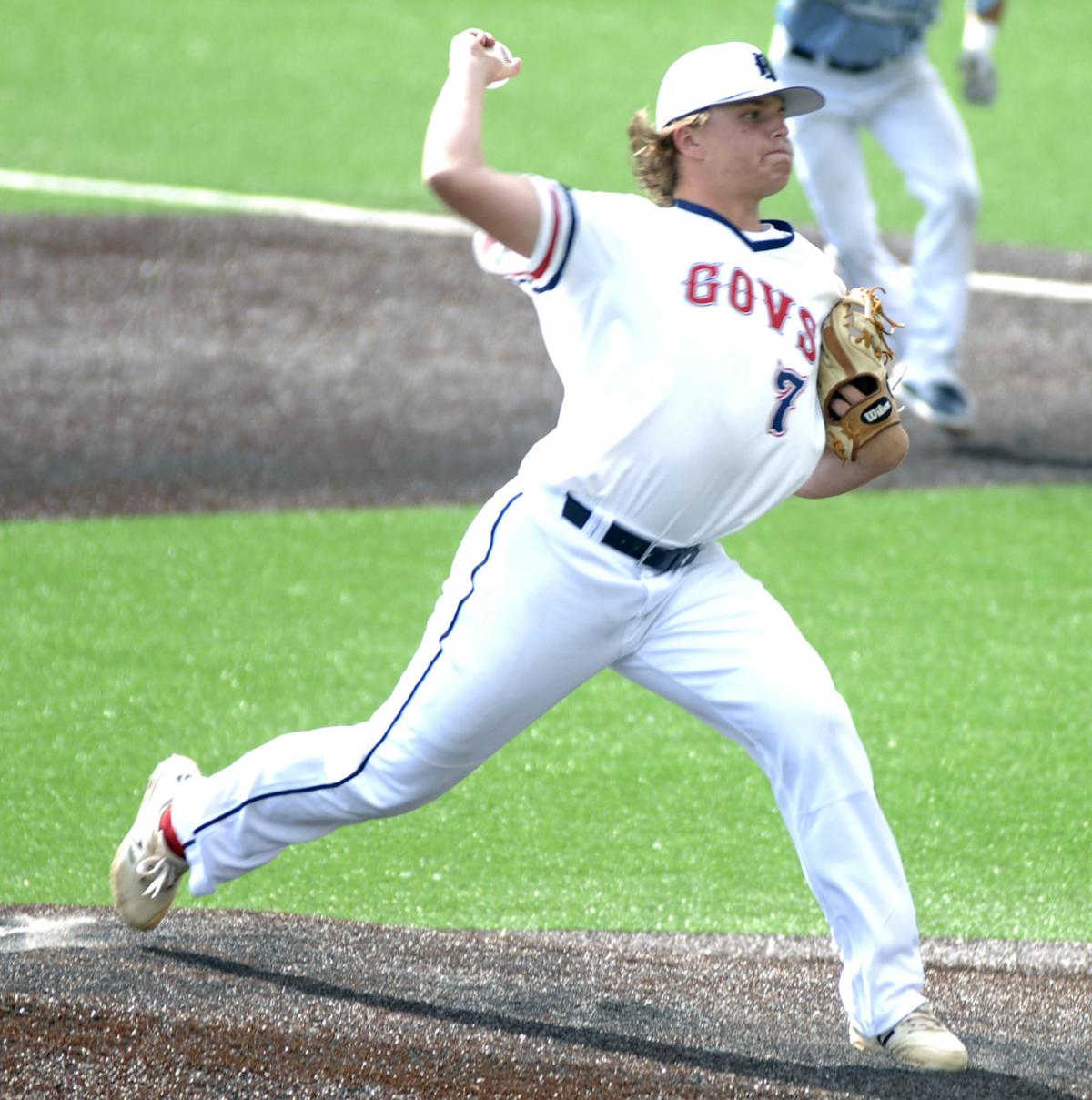 Govs pitcher Isaac Pegors delivers during the fourth inning of Sunday's game against the Capitals. 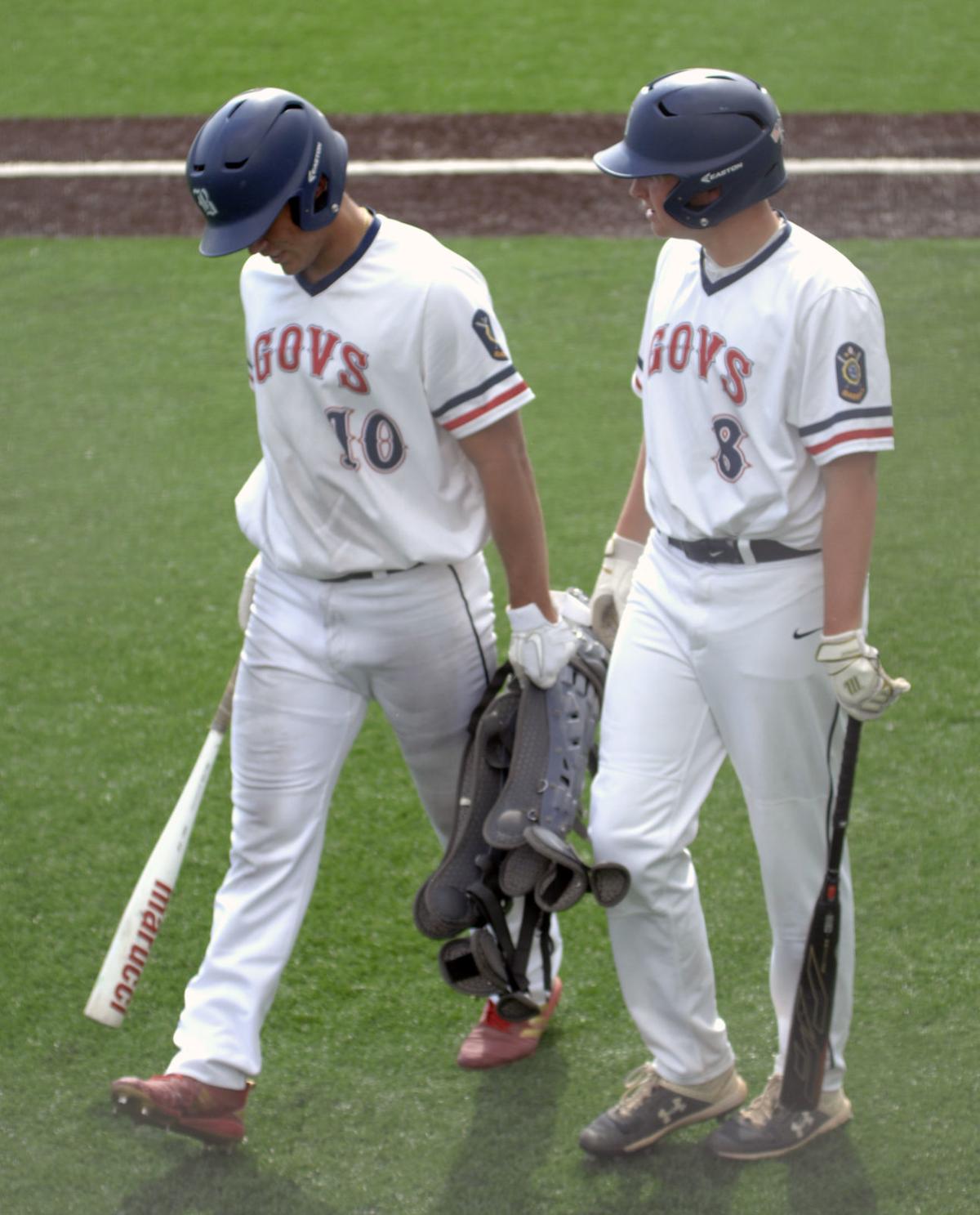 Cade Feeney, left, walks back to the dugout after scoring one of his four runs on Sunday against the Capitals. Feeney went 4-for-5 with a home run in the Govs' 16-5 victory. Also pictured is Jack Johnson, right.

He must have said that after watching a game like the Governors' 16-5 Fathers Day victory over the Capitals at Dwyer Field.

Any hope the Class A Caps had of upsetting the AA Governors got off to a rocky start as Govs batters looked at more balls than strikes.

Mitzel left with the Caps trailing 4-2.

Governors head coach Mike Skytland credited his hitters with good selectivity at the plate. He said there was no game plan to wait out Mitzel.

"They were selective on their own. They did a good job of laying off pitches, but it wasn't pre-planned," Skytland said. "Overall, I was happy with our at-bats. We were patient. And we were aggressive when we got pitches in the zone."

Indeed. When Mitzel's successors, Kade Trottier and Peyton Eagleson, found the plate with greater regularity, the Governor bats heated up. The Govs banged out 12 hits over the final four innings, including a two-run home run to left field by Cade Feeney.

Feeney slugged a 3-and-2 pitch by Trottier out of the park with Connor Hanson aboard with one out in the fifth inning. Seven pitches before, Hanson had doubled to deep right field to score Connor Weikum and Nick Hinsz.

The Govs scored five times in the fifth to open an 11-2 lead.

Things got out of control in the seventh and final inning. The Govs sent 11 men to the plate in the top of the inning while putting up a five-spot. Three of those runs were unearned.

Handed two walks to start the bottom of the seventh, the Caps tallied three times. Mitzel and Reece Trottier singled in runs before the Govs' second infield double play of the day helped pitcher Nic Devine close out the game.

Keegan Glatt and Josh Lardy each had two of the Caps' eight hits.

Sunday's setback was just the second in 13 games for the Capitals. The Governors improved to 4-2.

The game wasn't originally scheduled. Skytland initiated the idea of a contest for a first-ever encounter between the two Bismarck teams. The Govs found themselves with an open week when the College World Series was canceled due to coronavirus concerns, along with the related American Legion baseball tournament.

"This week was our Omaha week," Skytland said. "I called Aric (Lee, Capitals head coach) and we made a date work. They're a competitive team, and I thought it would be a fun game to play. And we didn't have to leave town."

"Mike called looking for a game ... and I said OK," Lee said. "We've played 20 games between our two (A and B) squads already, but we had a common open date, and it fit."

Lee said there are benefits to playing tough opponents.

"When you play a great baseball team you get a measuring stick that shows where we need to get better," he observed.

Lee said he would like to resume the rivalry again in the future.

"Mike and I talked about it, and if it fits our schedule I'd like to do it again," Lee said. "I feel like we could give them a good game. And we don't have to travel. We can stay right here."

The Capitals B team plays at Hettinger on Tuesday. The varsity visits Williston and Watford City for four league games on Thursday and Friday.

Jackson Skjerseth is an unimposing 16-year-old young man from Fargo who can quickly teach the uninitiated a lesson. Namely, that first impress…

Be careful about leaping to conclusions. Especially so, if you're drawing conclusions about 6-foot-3 Dalton Feeney. That's a long leap.

CHICAGO (AP) — Forget about those halcyon first few days of spring training, when arranging for the right tee time on the right golf course is often more challenging than the work on the field.

No paychecks for 11 big leaguers: advance larger than salary

NEW YORK (AP) — Grant Dayton will notice one glaring absence this season after he reports to the Atlanta Braves: his twice-a-month salary.

Govs pitcher Isaac Pegors delivers during the fourth inning of Sunday's game against the Capitals.

Cade Feeney, left, walks back to the dugout after scoring one of his four runs on Sunday against the Capitals. Feeney went 4-for-5 with a home run in the Govs' 16-5 victory. Also pictured is Jack Johnson, right.