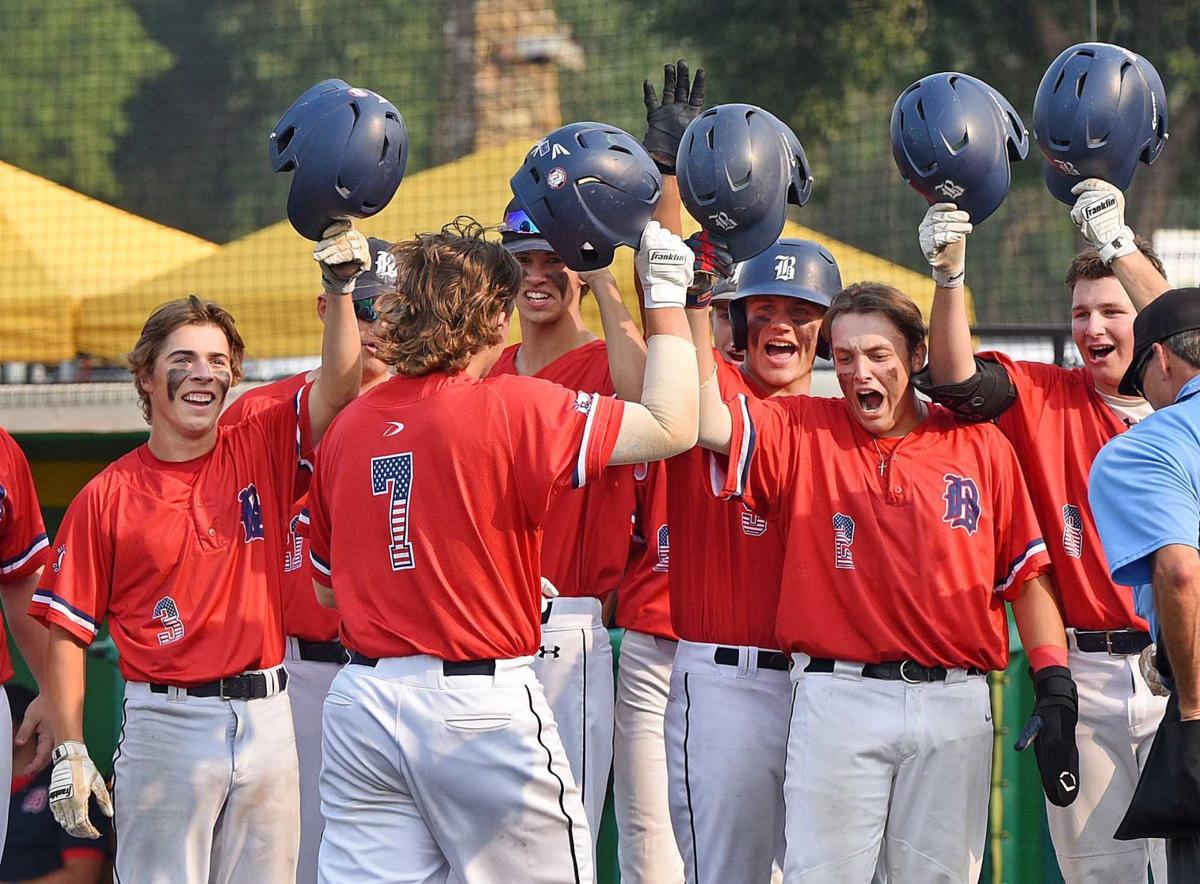 The Bismarck Governors' Isaac Pegors (7) gets high-helmets from teammates after his three-run home run in the top of the sixth inning of Friday night's game against Fargo Post 400 at Mandan Memorial Ballpark. 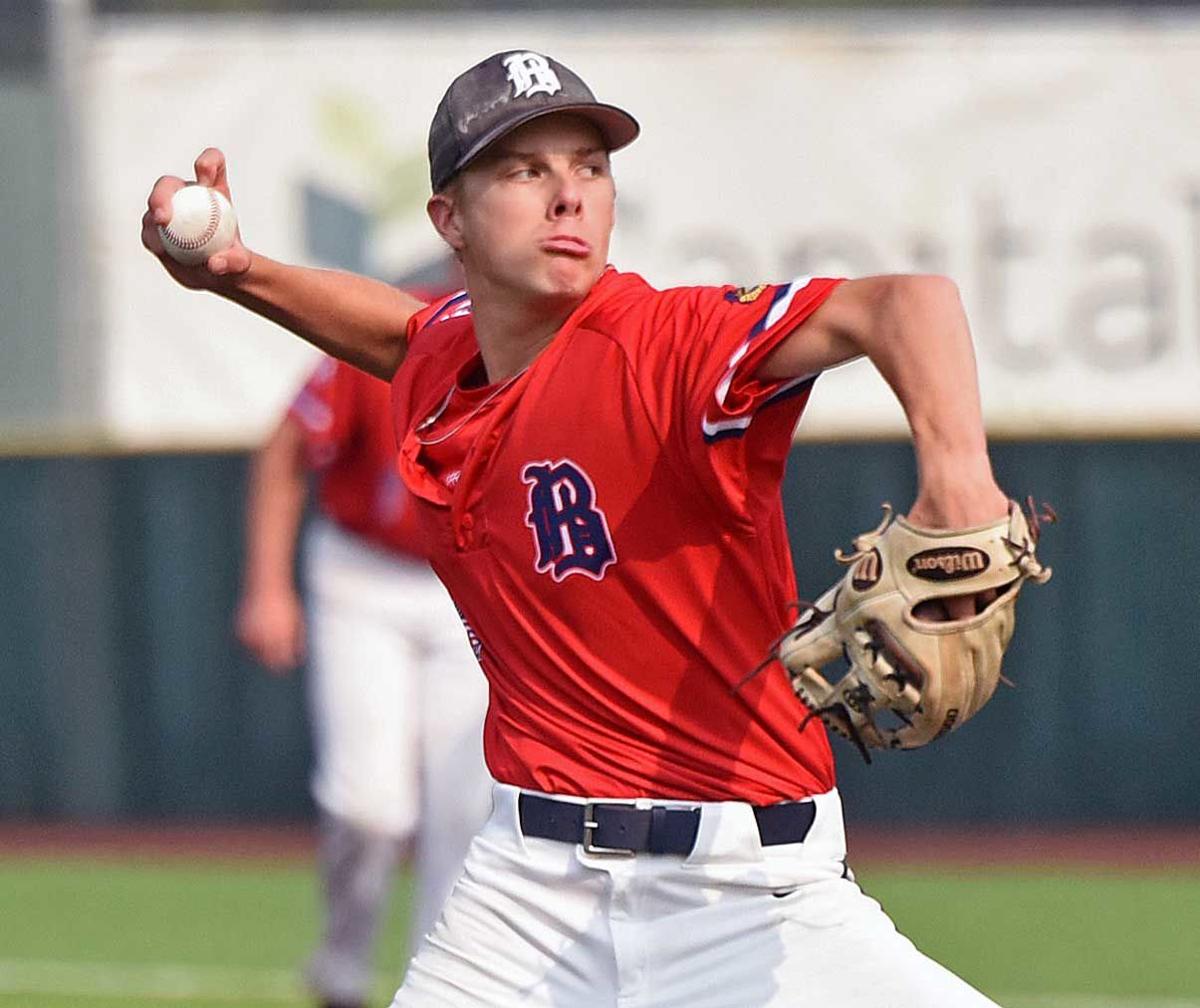 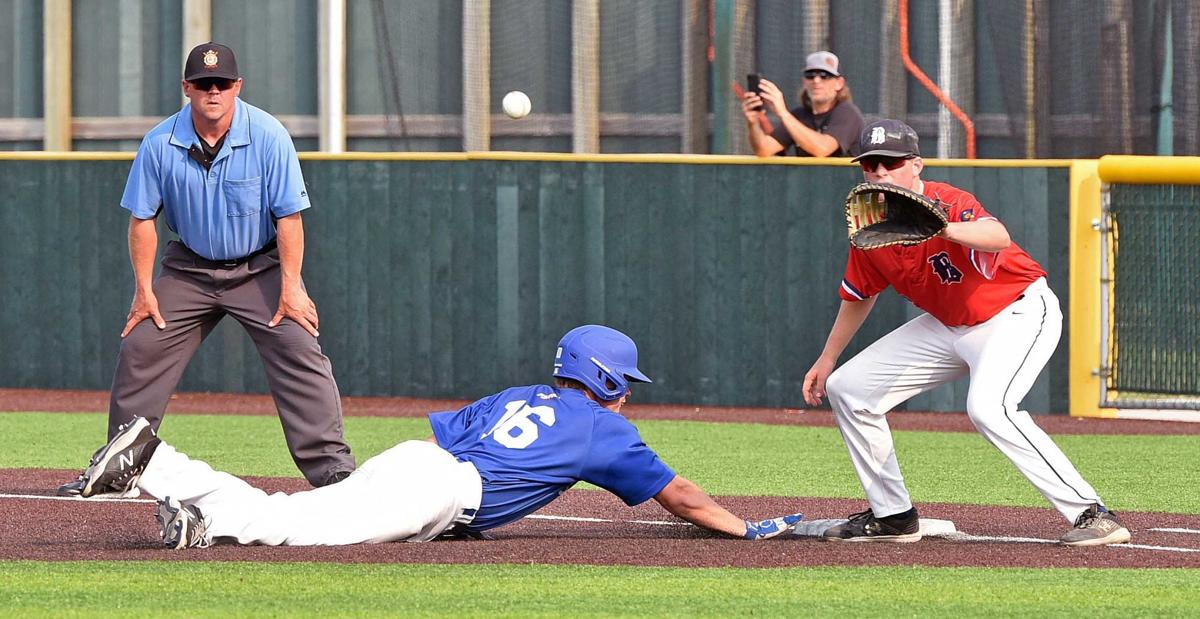 Fargo Post 400 Colten Alme  dives back into first base as Govs first baseman Jack Johnson waits for the pickoff attempt.

Ryan Keup provided the pitching, Isaac Pegors the power. As a result, the Govs are one win away from the Central Plains Regional.

Keup tossed five strong innings and Pegors put the game out of reach with a three-run home run in the sixth inning as Bismarck defeated Fargo Post 400 7-2 on Friday at the state Class AA Legion baseball tournament at Mandan Memorial Ballpark.

For Keup, the motivation was two-fold.

"I really want to keep playing with the boys, that's the first thing, and also I did pretty poor against them the last time we played them," Keup said. "I wanted to get revenge against them. So it was a mental game and those were the two key factors in getting the win today."

Keup allowed two runs on six hits with three strikeouts. He was lifted after Caden Graf led off the bottom of the sixth inning with a single. Luke Pengilly took over and got the final six outs.

"Ryan and Luke both threw great," Govs manager Mike Skytland said. "They threw strikes and were ahead all day. They gave us a great chance to win."

Post 400 was playing with house money. Thursday's win over West Fargo clinched not only a spot in today's 3 p.m. championship game, but also a trip to the Central Plains Regional next week in Sioux Falls, S.D. North Dakota gets two representatives in that tournament this year, meaning the winner of the Bismarck/West Fargo game today at noon also heads to South Dakota.

"We know what's at stake. It's win or go home and we don't want to go home. We want to keep playing and go to South Dakota," Keup said. "Now we just have to finish it off."

The Govs jumped out to a 3-0 lead in a matter of minutes.

Cru Walker singled on the first pitch of the game before Pegors pounded a double, putting runners on second and third. Up next was Ben Patton, who plated both Walker and Pegors with another double for an early 2-0 lead.

Jackson Uhler was up next and he collected the first of his three hits in the game, singling home Patton for a 3-0 edge. Uhler finished 3-for-3.

"You get early runs like that and it makes a big difference," Skytland said. "We had really good at bats in the first inning and it kind of set the tone."

The tone was the fat lady signing in the top of the sixth when the powerful Pegors unloaded for a three-run home run to make it 7-1 Govs. It was the second home run of the tournament and seventh of the Legion season for the Legacy High all-stater.

"Just looking for something to drive right away, but if it doesn't come, then I just try to wait and be patient for a good pitch. That's kind of the approach with every at bat," Pegors said. "I don't want to overthink it. It's just baseball. You're trying to stick with the fundamentals and do whatever you can to help the team win."

Pegors and Walker each had two hits in the game for the Govs, who had 10 total.

"Isaac's been really good, but it's also been nice to see how we've gotten contributions from a lot of different guys in this tournament," Skytland said. "That's a pretty good formula."

Andy Mach and Eli Mach had RBI singles for Post 400 in the fourth and sixth innings, respectively, but Keup and Pengilly were in command otherwise.

"I don't think I'm a big velo guy, so hitting spots was the key," said Keup, who will attend Lake Superior State in Michigan in the fall. "I have a lot of faith in our defense and they made the plays."

Pitching depth has been a strength of the Govs all season, no more so than Friday being able to send a quality hurler like Keup to the slab.

"We're in a good spot pitching-wise and a big part of that was Ryan and Luke throwing like they did today," Skytland said. "We'll evaluate it tonight and have a plan for tomorrow."

Staff ace Ben Patton will be among the options. Patton pitched three innings on Tuesday. Patton beat West Fargo 2-1 in a complete-game performance on June 29. Pegors also will be available, ideally in his late-game relief role where he has excelled.

"I love playing in the field right away and being able to make plays for the team, and then if I get the opportunity to come in and shut it down later on, that's great," Pegors said. "It's win or go home now, so I'll do whatever they want me to do. We just want to keep the season going no matter what it takes."

The Patriots pounded out 17 hits in six innings of batting, with seven hitters collecting multi-hit games.

Leadoff batter Quade Peters put together a 4-hit performance. He scored twice and knocked in one. Evan Berg clubbed a solo home run in the bottom of the third inning. Berg finished 2-for-3 and scored three runs.

Brayden Jacobson added a triple to go with his two home runs in the tournament. He finished 2-for-4 with four RBIs.

Hunter Ruzicka doubled twice and had three RBIs for the Vistas, who were held to four hits in the game.

Braves vs Astros: A World Series six decades in the making

Sure, many pro baseball fans might not be thrilled to see either team make the series. Read on to find out why. But Atlanta toppled the 106-win Los Angeles Dodgers to win the National League pennant. See the highlights.

A look at what's happening around the majors on Saturday:

LEADING OFF: Astros try to clinch trip to World Series

NEW YORK (AP) — Yankees manager Aaron Boone lost a fourth member of his staff when New York announced Thursday that first base coach and outfield instructor Reggie Willits will leave at the end of the year to become a volunteer assistant for Oklahoma's college baseball program.

LOS ANGELES (AP) — Behind the red-hot bat of Eddie Rosario, the Atlanta Braves are one win away from their first World Series appearance since 1999.

LOS ANGELES (AP) — For a guy who dislikes drama, Chris Taylor sure provided plenty of it.

A look at what's happening around the majors on Saturday:

The Dodgers won on Thursday night. Of course they did.

The Bismarck Governors' Isaac Pegors (7) gets high-helmets from teammates after his three-run home run in the top of the sixth inning of Friday night's game against Fargo Post 400 at Mandan Memorial Ballpark.

Fargo Post 400 Colten Alme  dives back into first base as Govs first baseman Jack Johnson waits for the pickoff attempt.