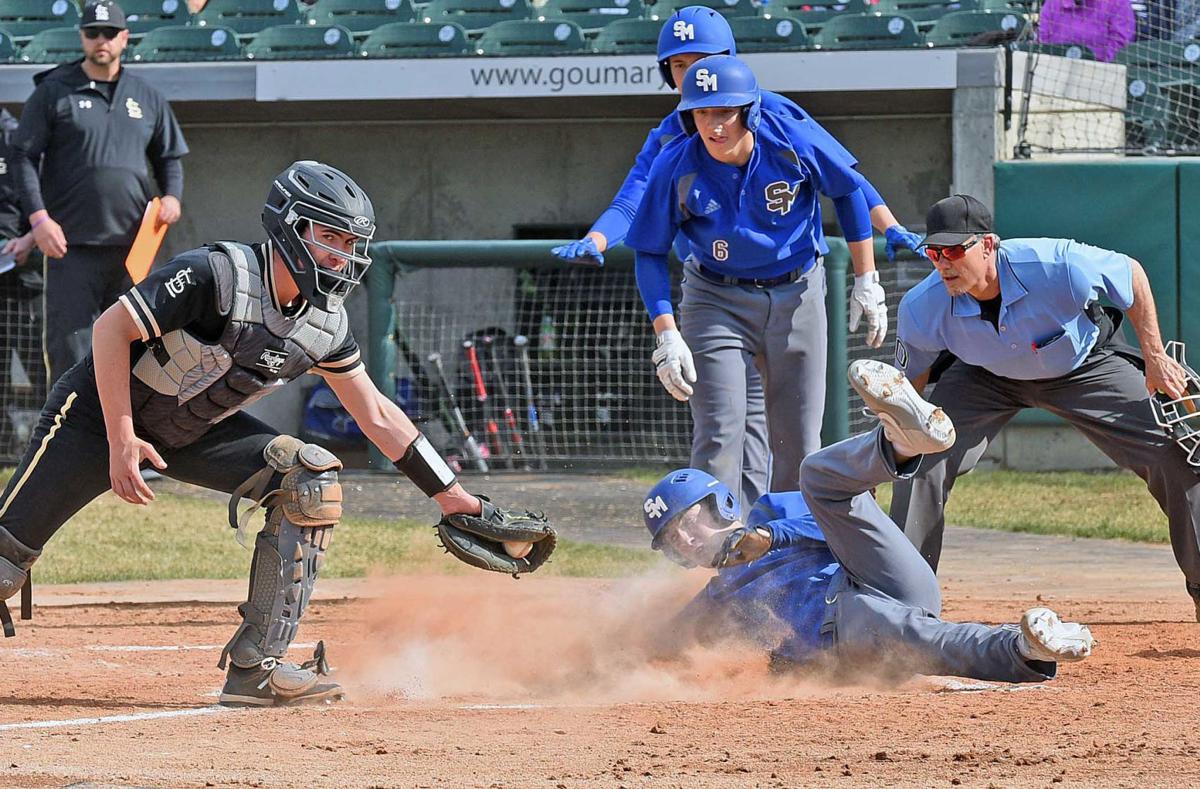 St. Mary's Thomas Jackson slides in safely to score a run for St. Mary's ahead of the tag of Legacy catcher Miles Stiefel in the first inning of Tuesday's game at Bismarck Municipal Ballpark. In the back is St. Mary's Matthew Nathe (6). 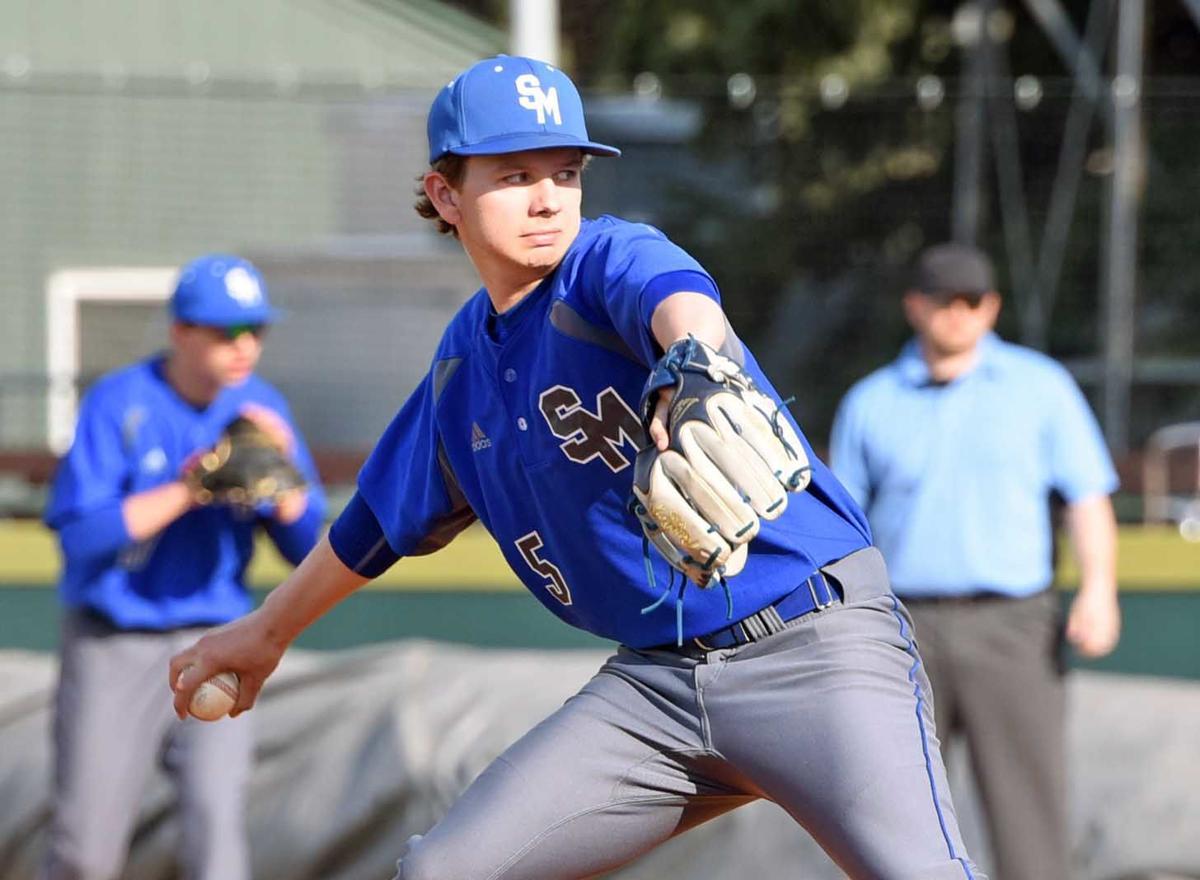 Jordan Porter (5) delivers a pitch for St. Mary's during Tuesday's game against Legacy.

But once the Legacy Sabers got settled in they found it a comfy and cozy place Tuesday at Municipal Ballpark.

The Sabers whanged out 25 hits en route to a 9-4, 13-1 doubleheader sweep of St. Mary's in West Region baseball.

It took the Sabers a while to get rolling in the first game. Down 4-1 in the opener, Legacy sputtered to life in the fifth inning. The Sabers tied the score with a rally that was assisted by Saints right-hander Jordan Porter, who plunked two men with pitches and walked another. Marcus Butts doubled to start the inning and Ben Patton knocked in a run with an infield hit.

Legacy's offense really came alive in the sixth. The Sabers smacked six hits, including Patton's three-run triple and RBI singles by Carter Klipfel and Isaac Pegors. Four of the runs were unearned due to an ill-timed Saints error.

Patton said his game-clinching three-run triple came in an ideal situation for a hitter.

"It was a 2-0 count and I was licking my chops. I was looking for a fastball and that's exactly what I got, and I got a good barrel on it," he said.

The ball sailed into deep right-center, giving him plenty of time for a standup three-bagger.

Patton, a multi-sport senior, said he was pretty sure the Sabers would eventually catch up with the St. Mary's pitchers.

"I think our offense is like a ticking time bomb. ... They say hitting is contagious, and once we got a couple of guys on base things took off," he observed. "What we did today that we haven't been doing is hit with runners in scoring position."

Verily. Legacy scored 22 runs while stranding just 11 men, six in the first game and five in the second.

The Sabers went into Tuesday's twin bill with a 3-0 regional record and a 5-4 overall mark. Patton said the West Region record is the true indicator.

"Our conference record is the real us. ... Our trip out east, those were losses to two really good teams," he noted.

Legacy split with West Fargo and dropped a doubleheader to West Fargo Sheyenne on April 16 and 17.

A couple of crooked numbers in the first two innings got Legacy off and running in the second game.

Cru Walker's double and another triple to right-center by Patton helped the Sabers to a two-run lead in the first.

LHS added four unearned runs in the second, which was a strange stew consisting of three singles and four Saints errors. Only one of the hits, a run-scoring single to left by Pegors, left the infield.

Legacy needed no such help in the fifth inning as it scored five times to invoke the 10-run mercy rule. Pegors and Patton swatted RBI singles as the Sabers combined four singles with three St. Mary's walks.

Patton went the distance on the mound for his third win. His five-inning log included three hits, one run, two walks and seven strikeouts. He threw 63 pitches, 39 of them strikes.

Both teams return to action on Friday. St. Mary's visits Mandan for a 4:30 doubleheader and Legacy visits region-leading Minot for a pair of games.

Leapaldt bringing the boom for 21-8 BSC

Dickinson's baseball team came to town Tuesday on a roll, and the Midgets are still rolling.

Shiloh rolls over Nighthawks in Class B baseball twin bill

To Josh Kolling's way of thinking, throwing strikes is the woof and warp of successful pitching.

It's been a long wait for the University of Mary to get over the Northern Sun tournament baseball hump.

Bismarck State College swept right through the Mon-Dak Conference tournament, ending it with a title.

Evers' blast lifts Marauders over Northern State and into No. 6 seed in NSIC tournament

St. Mary's Thomas Jackson slides in safely to score a run for St. Mary's ahead of the tag of Legacy catcher Miles Stiefel in the first inning of Tuesday's game at Bismarck Municipal Ballpark. In the back is St. Mary's Matthew Nathe (6).

Jordan Porter (5) delivers a pitch for St. Mary's during Tuesday's game against Legacy.