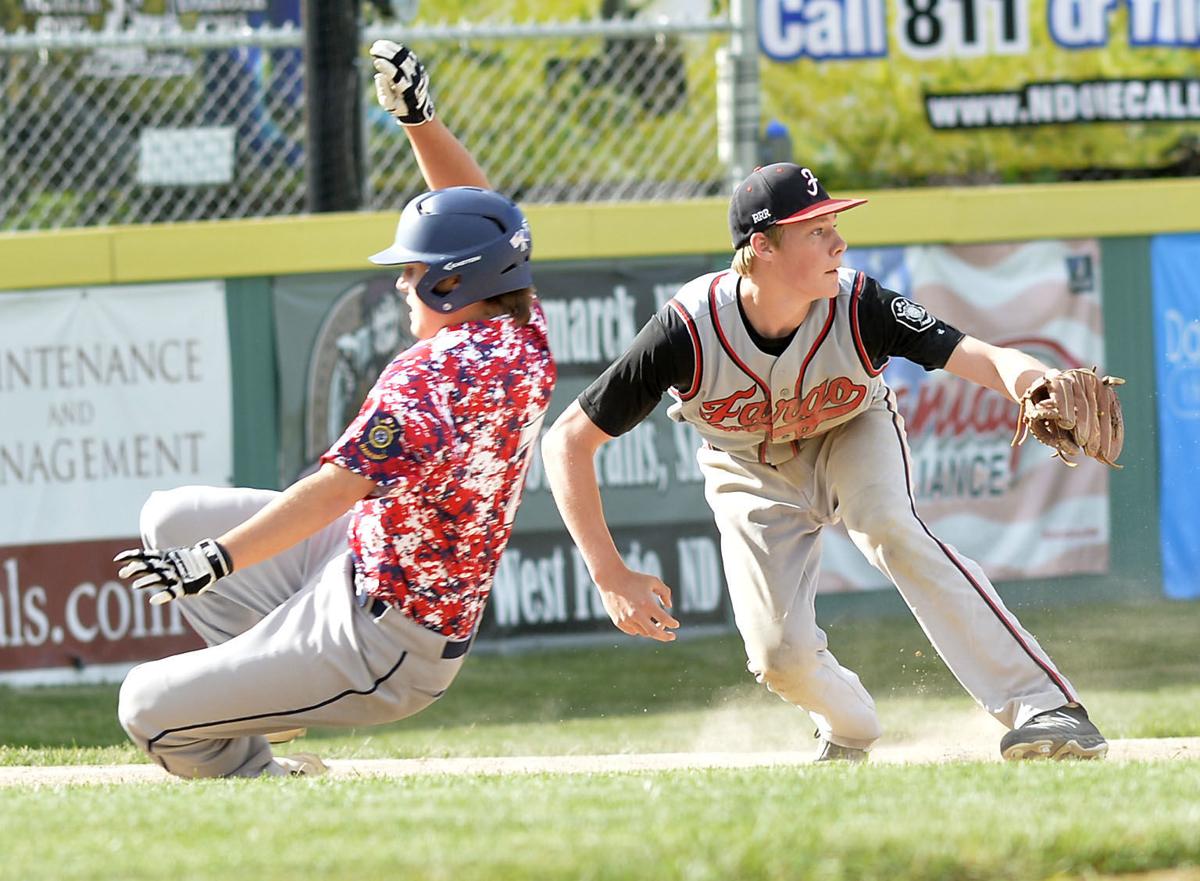 Isaac Pegors of the Bismarck Governors slides safely into third base in the second inning with a triple during game 1 of Wednesday's doubleheader at Bismarck Municipal Ballpark. Waiting for the throw is Fargo Post 2's Michael Hallquist. Pegors eventually scored for the Govs' lone run in a 6-1 loss. 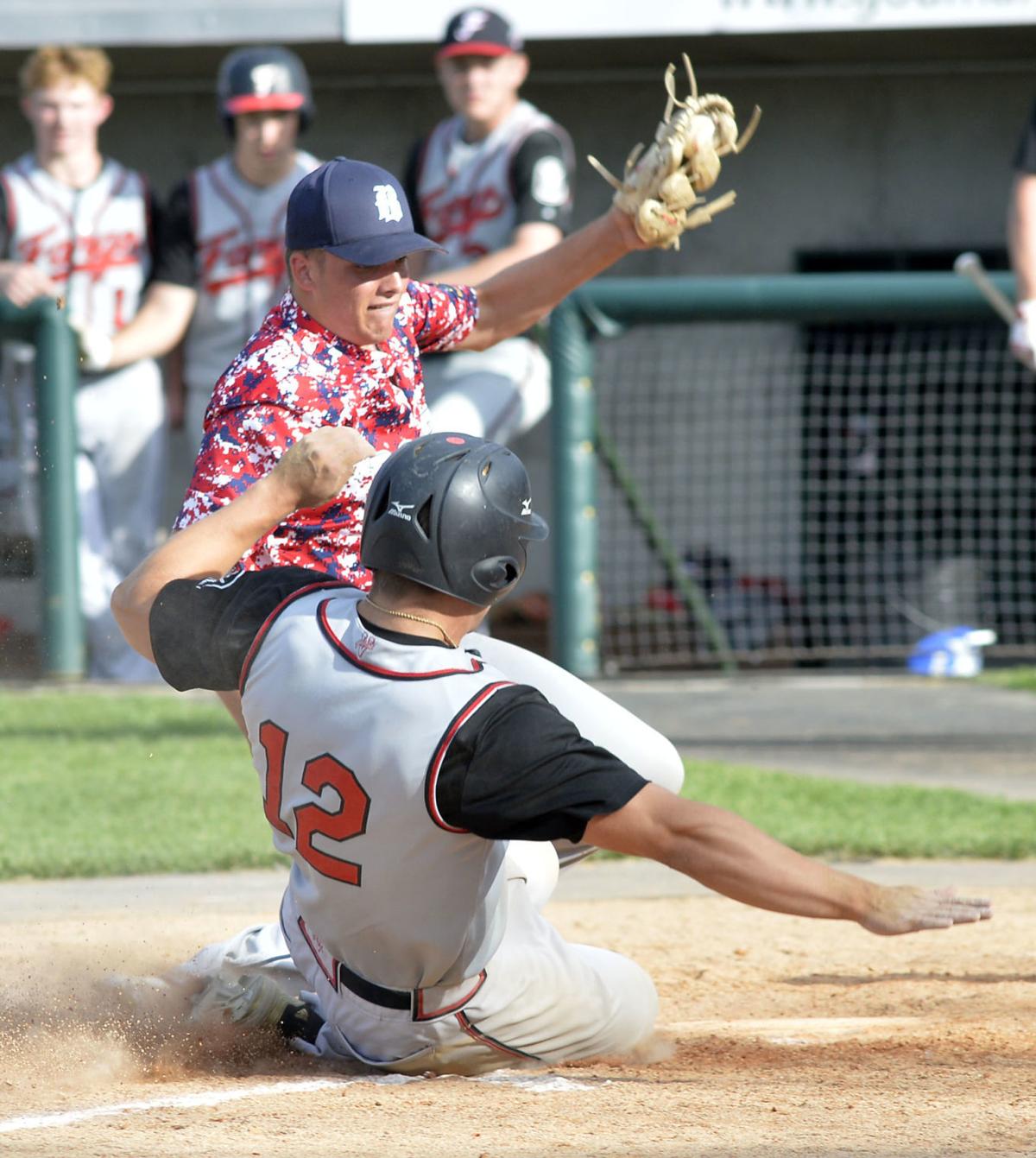 Bismarck Governors coach Mike Skytland sat in the dugout at Bismarck Municipal Ballpark on Wednesday looking for a way to forget his team’s error-filled 6-1 loss to Fargo Post 2 in the first game of a Senior Babe Ruth doubleheader.

“Can we forget that one,” Skytland asked?

It probably was easy after his team gave him more to think about in the nightcap as it blew a 4-1 lead in a 6-5 eight-inning loss.

“Bouncing back in the second game, taking the lead and being competitive and having a chance is all you can ask in that situation. Fargo is a real good team,” Skytland said.

Post 2’s Cole Hage pitched four innings and worked out of a bases-loaded jam in the seventh to get the win courtesy of Hage’s own two-run homer in the eighth.

Hage connected with one out and Jace Dew on first to break a 4-4 tie. He was 3-for-5 with three RBIs and two runs scored.

After Post 2 scored three times in the fifth to tie the game 4-4, Hage came in and shut the door to get the win. He struck out Skyler Riedinger and Colton Schulte with the bases loaded to send the game to extra innings.

He gave up Jack Johnson’s RBI double in the eighth to make it 6-5 but got Connor Weikum to fly out to end the game.

The Governors came into the doubleheader on fire offensively, having scored 30 runs in their first two games. But the defending state Legion champions doused that fire.

Bismarck helped Linn by committing five errors in the first game, which fell apart when starter Skyler Riedinger was pulled after three innings so as not to be overworked early in the season.

It was 1-1 when Riedinger left.

In in second inning, Fargo’s Caden Headlee reached on a fielder’s choice, stole second and went to third on a groundout before scoring on Mike Hallquist’s single in the second.

The Governors came right back in their half of the second to tie it. With one out, Isaac Pegors doubled to right-center and went to third when Dew dropped the ball after picking it up in centerfield. Pegors, who had both Bismarck hits, later scored the Governors’ only run on Jack Johnson’s sacrifice fly.

Cru Walker replaced Riedinger in the third and surrendered two runs. Drew Sandy led off with a double, one of his two hits, and later scored on a bloop to right by Danny Boutain. Sam Moser, who had walked, went to third on the play and eventually scored on a wild pitch to make it 3-1.

Two runs in the fifth, one on another wild pitch and one on Sam Moser’s flared single to left, upped Post 2’s lead to 5-1. Two more errors in the sixth led to the game’s last run.

“We didn’t play our best game,” Skytland said. “I think we showed some rust in that (first) game. We had some guys playing out of their normal positions. You’re going to have a few more mistakes.”

One of Bismarck’s two errors in the first inning of game 2 led to Fargo’s first run. Hage singled, went to second on a wild pitch and scored when Pegors threw wild of first base on a pickoff.

Bismarck tied it 1-1 in the first when Cade Feeney scored from first on a single by Riedinger that went under the glove of Headlee into centerfield.

Pegors left after three innings of a 1-1 game and was replaced by Jackson Uhler.

But Post 2 came back in the fifth to knot it up. Hage, Sam Moser and Linn drove in runs during the rally.

“It’s a long season and this is only the third day of it,” Skytland said.

The Govs head to Aberdeen for a doubleheader against the Smittys on Monday.

Jackson Skjerseth is an unimposing 16-year-old young man from Fargo who can quickly teach the uninitiated a lesson. Namely, that first impress…

Be careful about leaping to conclusions. Especially so, if you're drawing conclusions about 6-foot-3 Dalton Feeney. That's a long leap.

Isaac Pegors of the Bismarck Governors slides safely into third base in the second inning with a triple during game 1 of Wednesday's doubleheader at Bismarck Municipal Ballpark. Waiting for the throw is Fargo Post 2's Michael Hallquist. Pegors eventually scored for the Govs' lone run in a 6-1 loss.