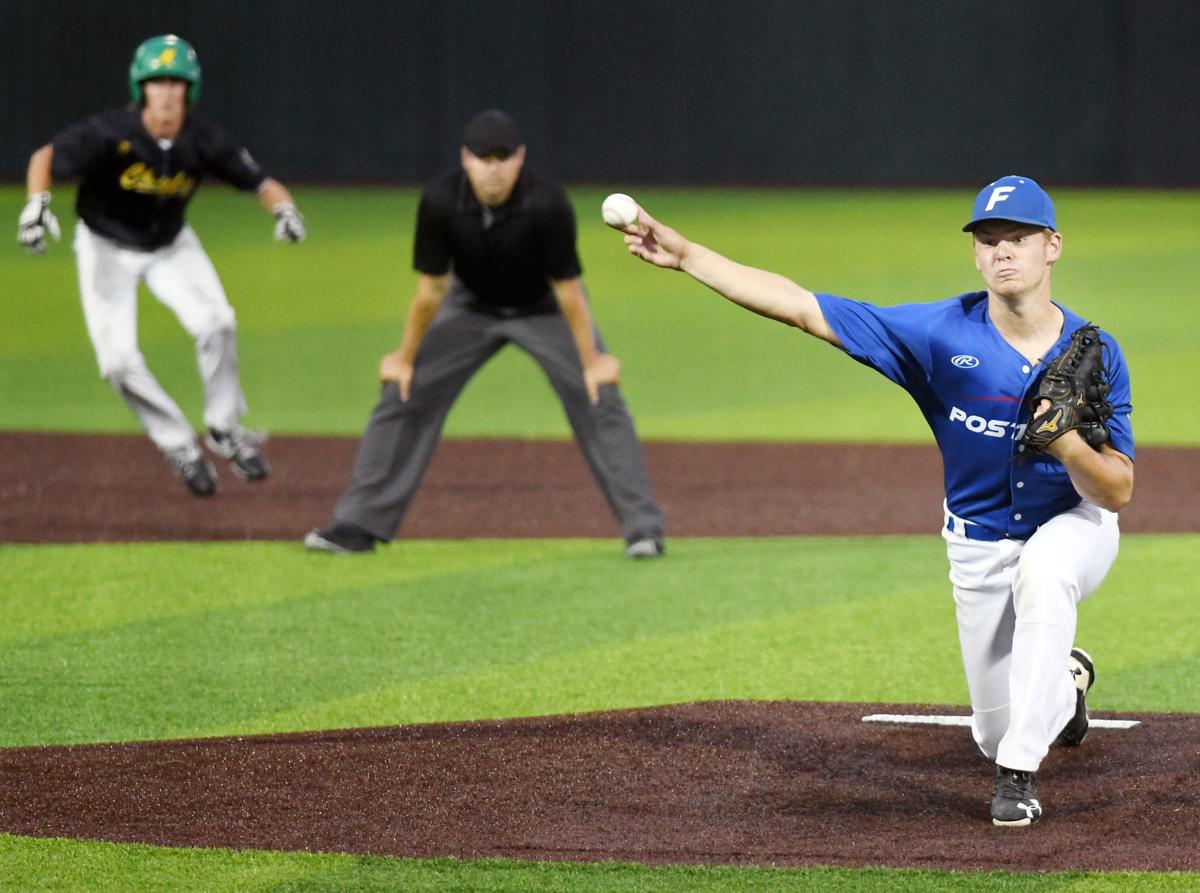 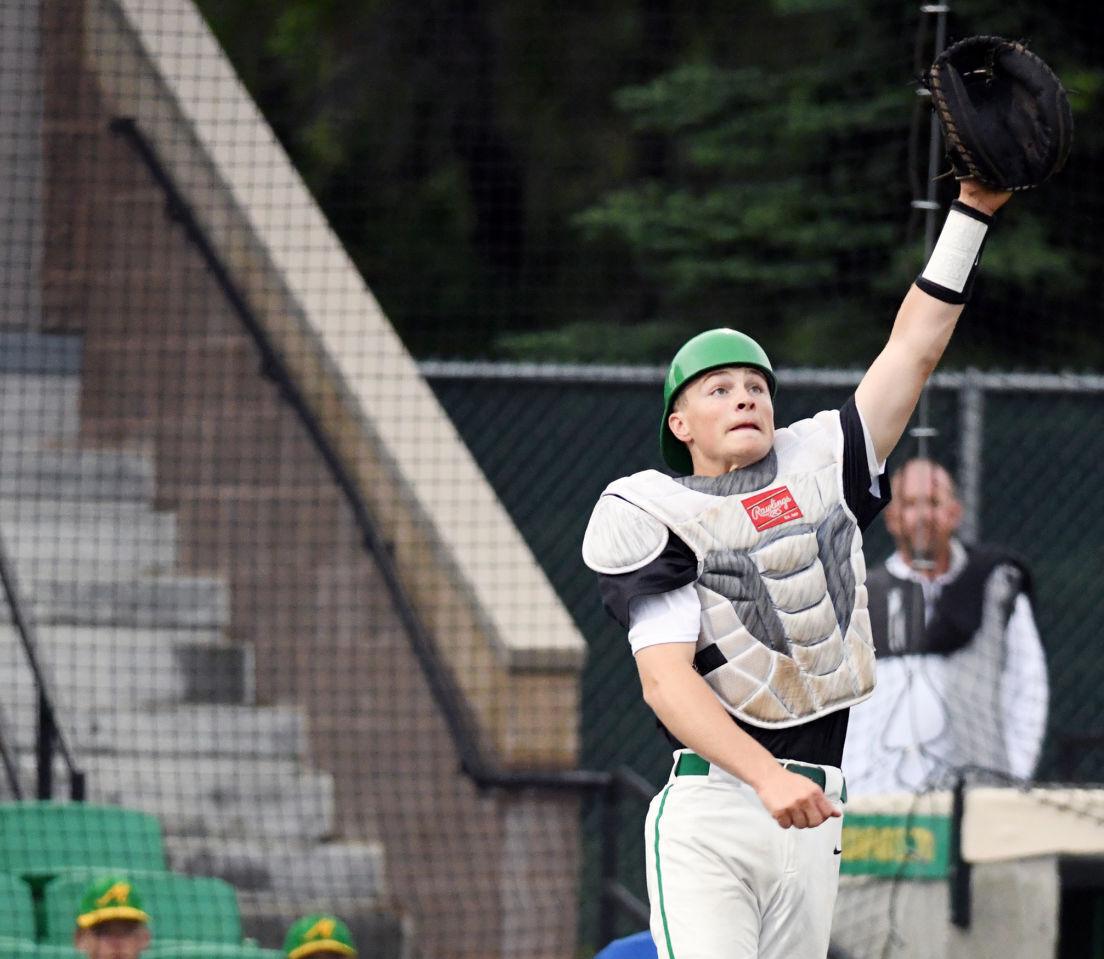 Mandan Chiefs catcher Isaac Huettl, jumping, is hitting .440 at the plate and throwing out nearly 25% of runners on the basepaths.

Jackson Skjerseth is an unimposing 16-year-old young man from Fargo who can quickly teach the uninitiated a lesson. Namely, that first impressions don't count.

At 5-foot-11 and 180 pounds, Skjerseth is not physically imposing. And the young right-hander doesn't light up radar guns. His fastball tops out at under 80 mph.

But Skjerseth is a young man with a plan and the control he needs to implement it. He shut out the Mandan Chiefs 10-0 Tuesday night in baseball action at Memorial Ballpark. In the doing, he taught all in attendance a lesson about the importance of pinpoint control and timing.

The doubleheader started almost two hours late due to lightning strikes in the area. As a result, the second game was still in progress as the Tribune went to press.

Skjerseth, who will be a senior at Davies High School, stopped Mandan on two hits. He walked one, hit a batter and struck out nine. He surrendered both hits in the third inning, loading the bases in the process.

With one man on first base via a walk and one out, Mandan's Anthony Johnson beat out an infield hit. Easton Andresen followed with a single to right-center field, and the Chiefs, down 6-0, had a chance to get back in the game. The bases were loaded with one out.

After that it was clear sailing. He reached the finish line by retiring 11 of the final 13 batters he faced. His game totals were 100 pitches, 66 of them strikes.

Virtually all of those 100 deliveries had a purpose.

"The coach and I got on the same page right away. We saw their weaknesses and started to pitch backward after the first inning. We stayed with it the entire game," he said. "The typical strategy is to get ahead with the fastball and introduce offspeed pitches later in the count. ... We tried to keep then off balance, and it seemed to work."

Meanwhile, the Stars were giving Skjerseth, now 2-2 on the season, plenty of elbow room with which to work. They plated six runs in the first two innings, four of them unearned as the Chiefs committed three of their six errors.

Jaiden Yaeger rapped an RBI single to left field and Colten Alme drilled an RBI double to right amid the Stars' five-run first inning, which was enhanced by three Chiefs errors. The Stars added another tainted run in the second.

Skjerseth said Tuesday's outing was typical for him. He's a low-walk pitcher who fans around a batter an inning, on average. He said his breaking stuff helped elevate his strikeout count against the Chiefs.

"They couldn't really hit my curveball, and once I got to two strikes I stayed with (the curve)," he observed. "I'm different from a lot of guys. Since I don't throw hard, I rely on my curve and control and that tends to get hitters off balance."

The Stars, 16-7 on the year and 2-3 in the statewide standings, got two hits apiece from leadoff man Ben Callies and Landon Donner. Callies and Truman Werremeyer doubled for the game's only extra-base hits. Tuesday's victory was the Stars' fourth in a row.

Mandan, following a strong showing last week at a tournament in Minot, dipped to 7-13 with the loss, 1-7 statewide. The Chiefs lost for the first time in five starts.

Jake Kincaid, the Mandan coach, said the error-dotted game was a disappointment following his team's performance in Minot.

"What I've found with high school-aged kids is every day you have a chance to go both ways, up and down," he said. "But the thing about doubleheaders is you can turn things around in an hour."

Hall of Fame manager Tom Lasorda out of intensive care

FULLERTON, Calif. (AP) — Hall of Fame manager Tom Lasorda has been moved out of intensive care, although he remains hospitalized in Southern California.

PHILADELPHIA (AP) — A person familiar with the Philadelphia Phillies' finances says the team lost $145 million during the pandemic-shortened 2020 season played without fans.

MILWAUKEE (AP) — The Milwaukee Brewers traded reliever Corey Knebel to the World Series champion Los Angeles Dodgers on Wednesday for a player to be named or cash.

WASHINGTON (AP) — Joe Ross and the Washington Nationals agreed to a $1.5 million contract Tuesday, one day before the deadline for teams to offer deals to unsigned players on their 40-man rosters.

DENVER (AP) — Minor league baseball will be given new life in Colorado next season with the addition of three teams in the state.

The free agent market received a small boost this week, although it remains to be seen whether teams will be eager to take advantage.

Mandan Chiefs catcher Isaac Huettl, jumping, is hitting .440 at the plate and throwing out nearly 25% of runners on the basepaths.