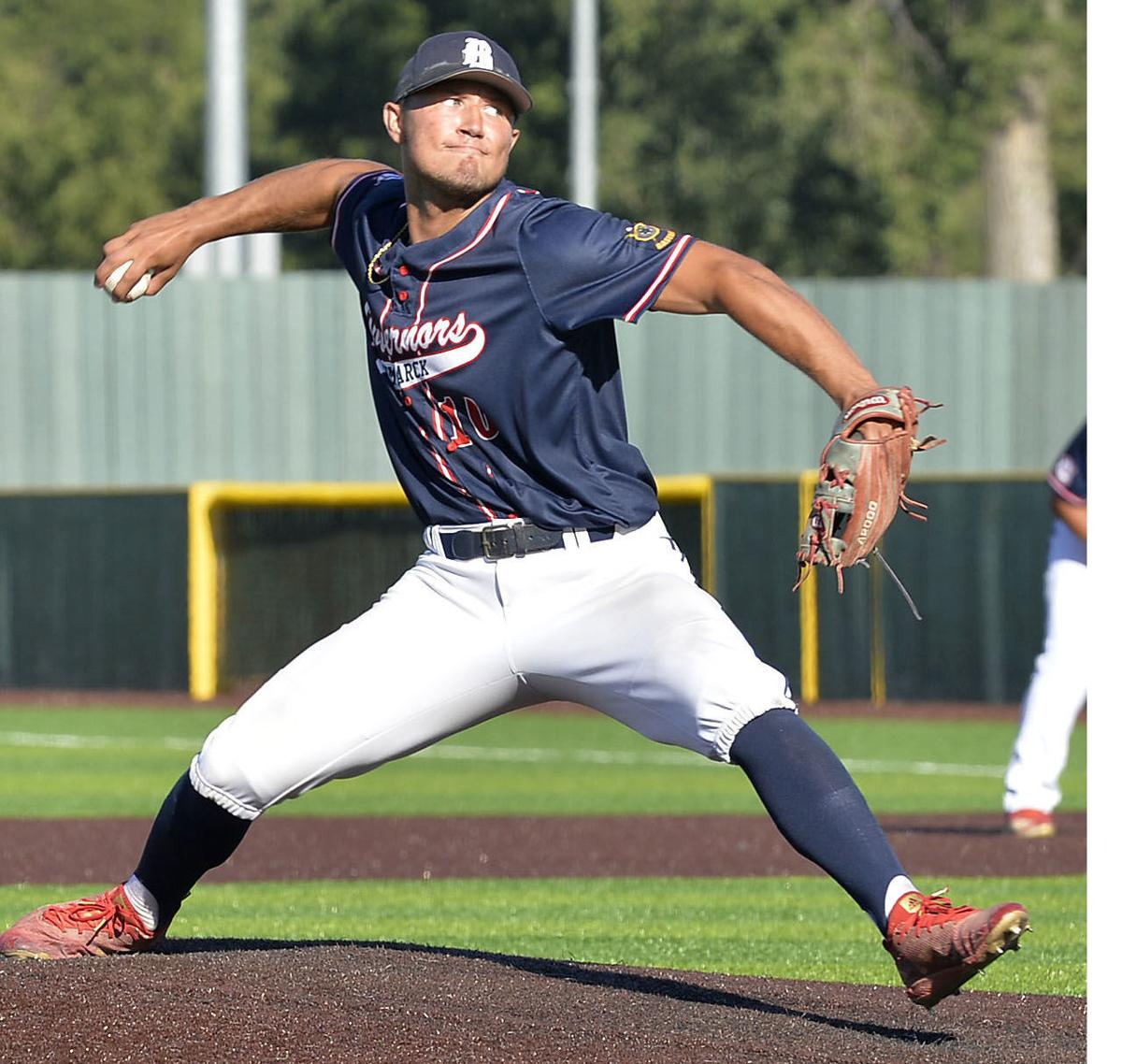 Bismarck Governors pitcher Cade Feeney delivers to the plate against the Mandan Chiefs on Monday at Memorial Ballpark. 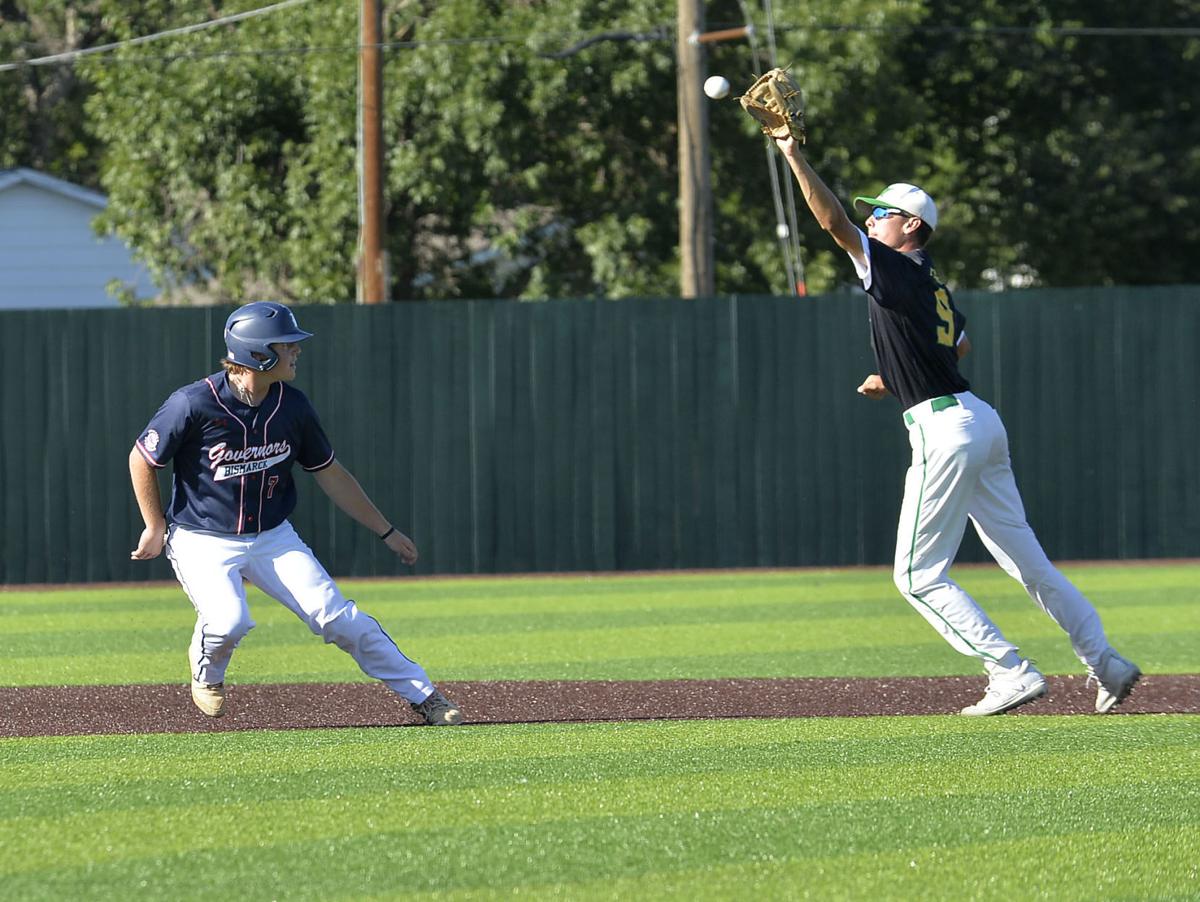 The Mandan Chiefs' Lucas Burgum, right, gets the Bismarck Governors' Isaac Pegors in a rundown between second and third base during Monday's game. Pegors was tagged out on the play.

The Govs found their hitting groove Monday night, but Mandan produced some ninth-inning magic to earn a split.

Bismarck rolled to a 16-0, 5-inning win in the first of two non-conference games at Memorial Ballpark. It was all offense in the second game as well, but this time by both teams. The Govs and Chiefs combined for 25 runs on 23 hits, the last of which a two-run single by Cole Schmidt gave Mandan a 13-12 walk-off win and split of the doubleheader.

After the Govs scored five runs in the top of the seventh to rally from a 10-7 deficit to 12-10 lead, the Chiefs came roaring right back.

Avery Bogner singled to start the uprising. Jake Weiand followed with a single to put the tying run on base.

Bismarck pitcher Connor Weikum got induced a fielder’s choice for the first out, but Blake Arenz followed with a single to load the bases. Hot-hitting Isaac Huettl was up next and he walked to force in Bogner, cutting the deficit to one (12-11).

With the bases still loaded, Schmidt singled into left field to score Anthony Johnson and Arenz with the tying and winning runs.

Arenz led the charge for the Chiefs, going 3-for-5 with three runs and a stolen base. Schmidt had three RBIs.

The Govs pounded out 32 hits combined in the doubleheader, including 18 in opener.

Cade Feeney had another monster night for Bismarck.

In the first game, the North Dakota State commit went 4-for-4 with a double, triple and three RBIs. The hard-throwing right-hander also pitched the first three innings, allowing only two singles with four strikeouts.

In the second game, Feeney collected his second triple of the night. He also singled, walked and drove in a run.

Weikum had five hits and five RBIs on the night with triples in both games. In the opener, Connor Hanson finished 3-for-4 with a double, three runs and four RBIs.

The Govs (22-10) are back in action today, traveling to Dickinson to face the Roughriders. The games do not count in the statewide standings. On Thursday, Bismarck will either play at Fargo Post 400 in a pair of non-counters, or head to Grand Forks for a single game to determine the 2 and 3 seeds for next week's state tournament. The Govs are 10-5 in statewide competition. West Fargo is 7-5 with four to play. Bismarck holds the tiebreaker on West Fargo if they're tied when the regular season ends.

The Chiefs (15-23) close out the regular season on Wednesday with a doubleheader at West Fargo. Mandan will have to play its way into the state tournament via the play-in game on Saturday in Fargo against Post 400.

ARLINGTON, Texas (AP) — Marcell Ozuna and the Atlanta Braves got a little ahead of themselves.

Baserunning gets Braves again, NLCS slips away in Game 7

ARLINGTON, Texas (AP) — The Atlanta Braves made another baserunning mistake with a lead in the NL Championship Series.

Winning Game 1 was a sweet way to start the World Series for the Los Angeles Dodgers.

SAN DIEGO (AP) — The Houston Astros spent this odyssey of a season as baseball's biggest villains.

A look at what’s happening around the majors Sunday:

LEADING OFF: Rays, Dodgers all set to meet in World Series

ARLINGTON, Texas (AP) — The World Series matchup between the Los Angeles Dodgers and Tampa Bay Rays is a rare meeting of baseball’s best for the title, and a matchup of organizations with Andrew Friedman’s imprint.

ARLINGTON, Texas (AP) — Clayton Kershaw has pitched in the final game of the season for the Los Angeles Dodgers six of the last seven years. None of those were followed by lifting the World Series trophy.

Bismarck Governors pitcher Cade Feeney delivers to the plate against the Mandan Chiefs on Monday at Memorial Ballpark.

The Mandan Chiefs' Lucas Burgum, right, gets the Bismarck Governors' Isaac Pegors in a rundown between second and third base during Monday's game. Pegors was tagged out on the play.