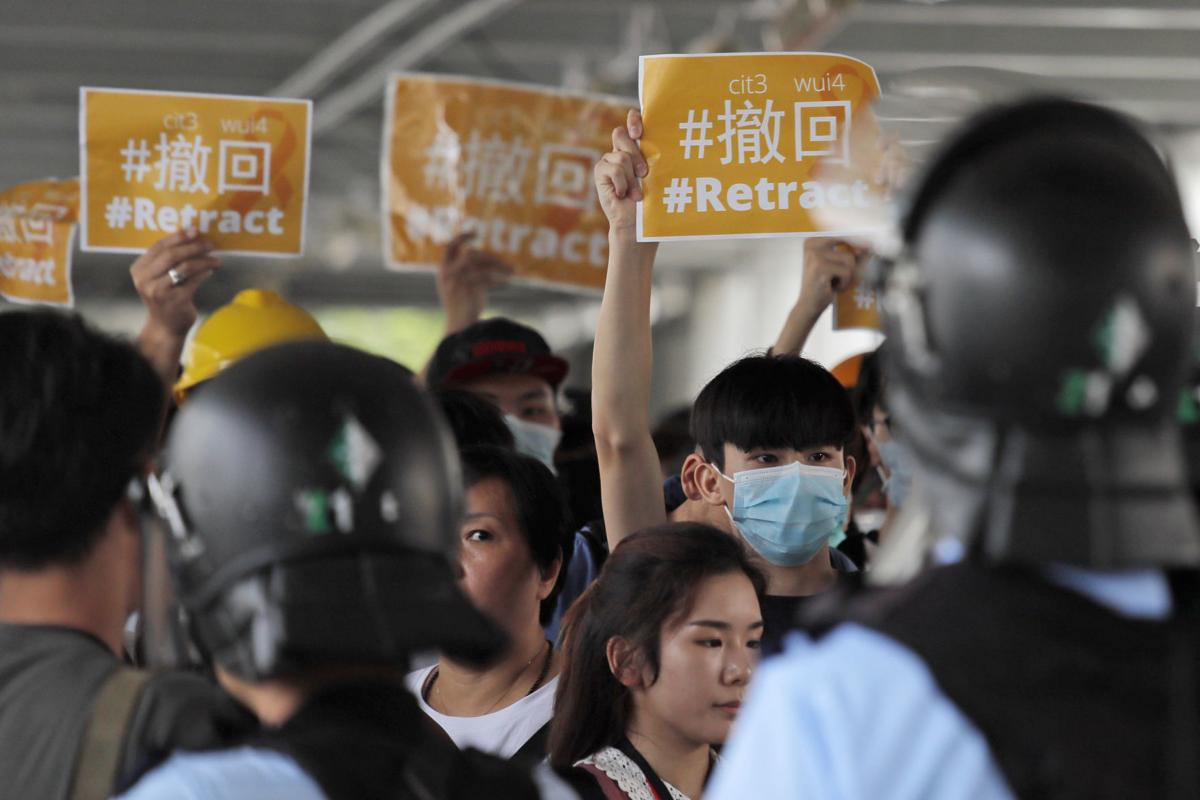 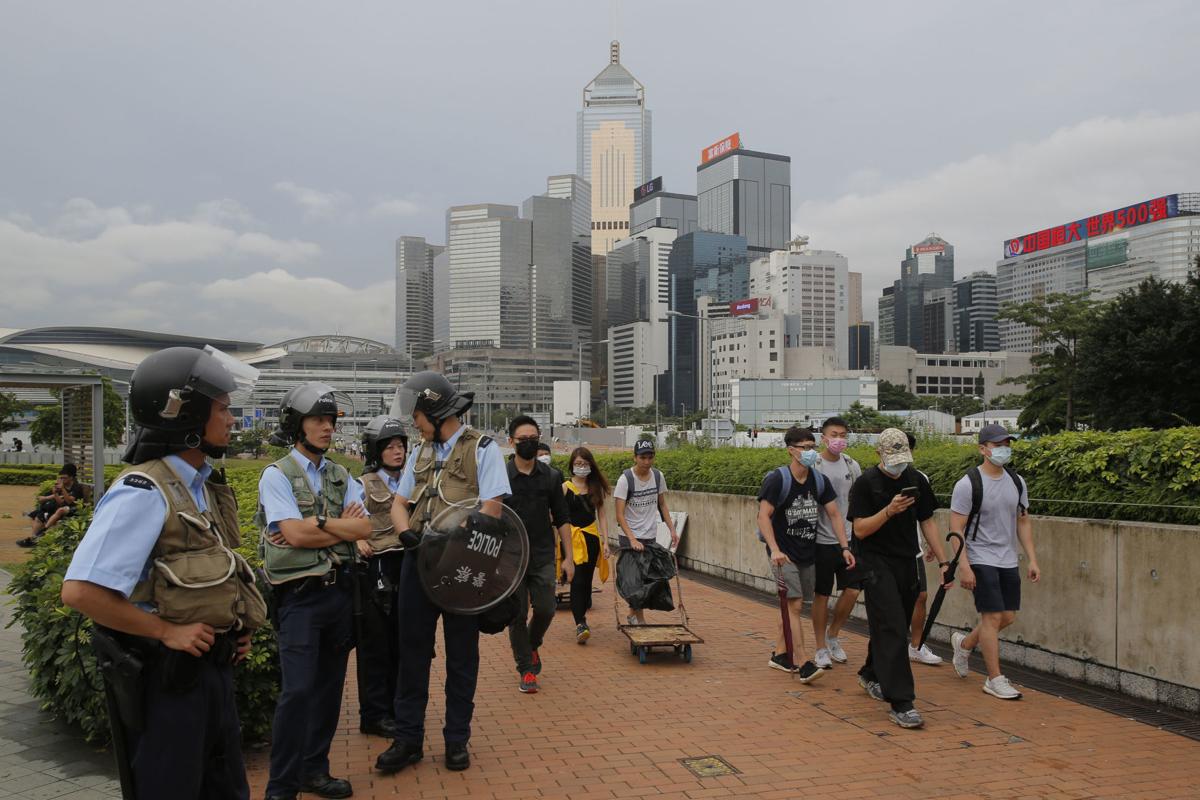 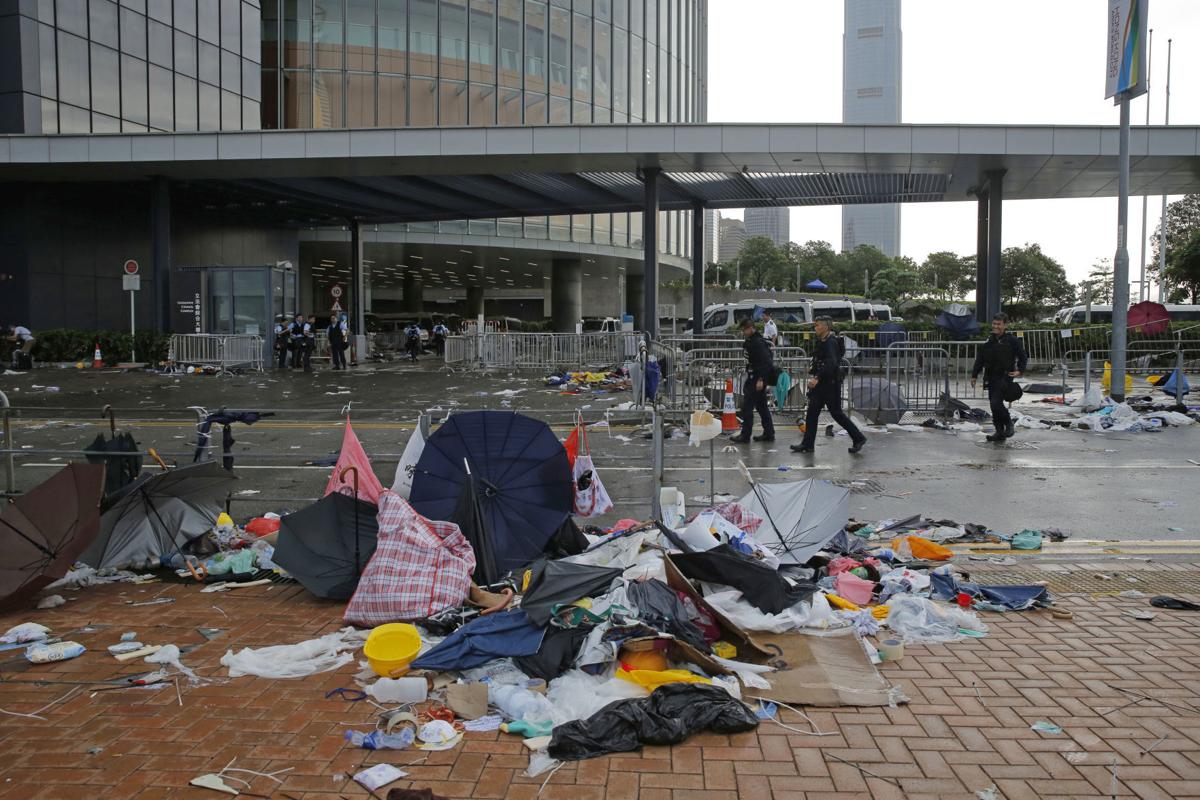 Riot police patrol outside the Legislative Council in Hong Kong, Thursday, June 13, 2019. Traffic has been restored in the heart of Hong Kong a day after clashes between police and protesters who oppose legislation that would allow criminal suspects to be sent to mainland China for trial. (AP Photo/Kin Cheung)

HONG KONG — Hong Kong's legislature suspended meetings Thursday as leaders considered their next steps following violent clashes between police and protesters opposed to a bill that would allow suspects to be tried in mainland Chinese courts.

Critics say the measure, now on hold, would undermine the city's cherished legal autonomy amid moves by Beijing to tighten its hold over the former British colony.

Several hundred young protesters gathered Thursday on a pedestrian bridge, standing for hours and singing "Sing Hallelujah to the Lord," and holding up signs with messages such as, "Don't Shoot" and "End the Violence."

The debris-strewn area around the city's government headquarters, which was besieged by the demonstrators a day earlier, was blocked off by police.

The standoff between police and protesters is Hong Kong's most severe political crisis since the Communist Party-ruled mainland took control in 1997 with a promise not to interfere with the city's civil liberties and courts. It poses a profound challenge both to the local leadership and to Chinese President Xi Jinping, the country's strongest leader in decades who has demanded that Hong Kong follow Beijing's dictates.

Hong Kong Chief Executive Carrie Lam declared that Wednesday's violence was "rioting" that was "intolerable in any civilized society that respects the rule of law." That designation could raise potential legal penalties for those arrested for taking part.

"Intense confrontation is surely not the solution to ease disputes and resolve controversies," Lam said, according to an official news release.

A group of opposition lawmakers attempted to visit Lam's residence to protest against the police use of force, including tear gas and rubber bullets, against the protesters on Wednesday. They were stopped by police and it was unclear if they would be able to present their complaint.

It's also unclear how Lam, as chief executive, might defuse the crisis, given Beijing's strong support for the extradition bill and its distaste for dissent.

Beijing has condemned the protests but so far has not indicated whether it is planning harsher measures. In past cases of unrest, the authorities have waited months or years before rounding up protest leaders.

Nearly two years ago, Xi issued a stern address in the city stating that Beijing would not tolerate Hong Kong becoming a base for what the Communist Party considers a foreign-inspired campaign to undermine its rule over the vast nation of 1.4 billion people.

Not all in Hong Kong support the protesters. About a dozen older people staged a demonstration in a downtown garden in support of the extradition bill. But others expressed sympathy.

"I think that if the government continues doing this, there will be no hope for Hong Kong. If there's no hope for Hong Kong, this is the last chance for us to fight for (it)," said Daniel Lee, a doctor. "But I don't know if we can do anything meaningful. Seeing these kids going out, being hit like this and suffering tear gas, anyone with some sense of justice will come to help them."

Though never a bastion of democracy, Hong Kong enjoys freedoms of speech and protest denied to Chinese living in the mainland.

Opposition to the proposed extradition legislation, championed by Lam with Beijing's support, brought what organizers said was 1 million people into the streets on Sunday. The clashes Wednesday drew tens of thousands of mostly young residents and forced the legislature to postpone debate on the bill.

On June 4, the city saw one of its biggest candlelight vigils in recent years to commemorate the 30th anniversary of China's bloody suppression of student-led pro-democracy protests centered on Beijing's Tiananmen Square in 1989.

Those in Hong Kong who anger China's central government have come under greater pressure since Xi came to power in 2012.

The detention of several Hong Kong booksellers in late 2015 intensified worries about the erosion of the territory's rule of law. The booksellers vanished before resurfacing in police custody in mainland China. Among them, Swedish citizen Gui Minhai is under investigation for allegedly leaking state secrets after he sold gossipy books about Chinese leaders.

In April, nine leaders of a 2014 pro-democracy protest movement known as the "Umbrella Revolution" were convicted on public nuisance and other charges.

The relationship between citizens and the authorities "has been completely deteriorated," Labor Party Vice Chairman Fernando Cheung Chiu-hung told The Associated Press.

"We've seen (the police) use extreme forces which are not proportional to the demonstration," Cheung said Thursday.

The demonstrators appeared little deterred, though they were taking pains to cloak their identities by wearing masks, declining to give their full names to journalists and using cash rather than registered, stored value cards to buy subway tickets. Heavy rain over the city put a damper on new demonstrations, although protesters interviewed Wednesday said they had no plans of giving up until Lam's government dropped its plans for the amendments altogether.

Lo, the police commissioner, defended the police handling of the clashes outside the government headquarters, saying officers only acted when they were charged by protesters carrying pavement bricks, planks and iron pipes from a nearby construction site.

"We have absolutely no bad intention to cause trouble with anyone. We are just doing our duty," he said.

He said the protesters acted in a "violent and organized manner."

"We know the crowd is hostile and very unstable and we tried our best to avoid confrontation," he said.

The rancor over the extradition issue is capturing attention in Taiwan, a self-governed island that China claims as its own territory.

On Thursday, Taiwanese President Tsai Ing-wen said Hong Kong's situation shows the "one country, two systems" framework devised for Hong Kong when Britain handed the colony back to China — presented by Beijing as a formula for uniting Taiwan with the mainland — cannot work.

The Hong Kong government should listen to its people and not rush to pass the legislation that sparked the protests, she told reporters.

This story has been corrected to show that name of police official is Stephen Lo Wai-chung instead of Yuen Yuk-kin.

Patrons under plastic: Restaurants get creative in virus era

PARIS (AP) — Dining at a table where each person is enclosed by a clear plastic shield might look and sound futuristic, but it could be one way for some restaurants to reopen. It also might help out if your companion orders escargots, heavy on the garlic.

LONDON (AP) — It’s nothing flashy. But then, it’s not supposed to be.

Researchers believe the creature is likely to be a new species of Grimpoteuthis, or "Dumbo octopus," a genus of deep-sea umbrella octopuses named for their fins, which resemble the ears of Disney's cartoon elephant.

Australian park celebrates birth of its first koala since bushfires

The Australian Reptile Park near Sydney in Australia is celebrating the birth of a koala named Ash, the first since bushfires devastated the area.

Coronavirus pandemic: Updates from around the world

Human activity threatens some of the 'most unique animals on the planet,' researchers warn

A combined billions of years of evolutionary history has produced remarkable creatures such as the punk-haired Mary River turtle, the yellow eyed Aye Aye lemur and the Chinese crocodile. Researchers warn they're threatened.

The discovery of a well preserved mosaic floor from ancient Rome comes almost a century after the remains of an ancient villa were found on the site.

Hello and welcome: Robot waiters to the rescue amid virus

RENESSE, Netherlands (AP) — You can always count on a robot for perfect timing.

Stocks rise on Wall Street, but US braces for 100,000 deaths

NEW YORK (AP) — Stocks surged on Wall Street to their highest levels since the business shutdowns took hold in the U.S. over two months ago, climbing on optimism Tuesday about the reopening economy even as the nation's official death toll from the coronavirus closed in on 100,000, a number President Donald Trump once predicted the country would never see.

SEOUL, South Korea (AP) — A former Samsung employee who spent nearly a year protesting his firing by living atop a 25-meter (82-foot) traffic camera tower in South Korea’s capital was helped back down Friday after the business giant apologized over his plight.

Riot police patrol outside the Legislative Council in Hong Kong, Thursday, June 13, 2019. Traffic has been restored in the heart of Hong Kong a day after clashes between police and protesters who oppose legislation that would allow criminal suspects to be sent to mainland China for trial. (AP Photo/Kin Cheung)