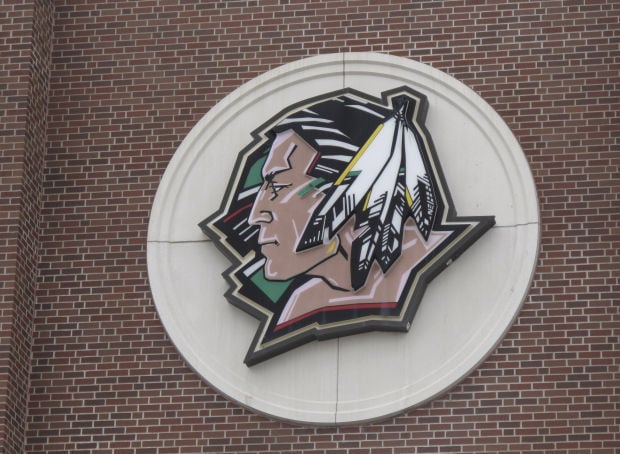 An American Indian head logo stands on the exterior of Ralph Engelstad Arena, a sports arena on the University of North Dakota campus in Grand Forks on March 22, 2010. 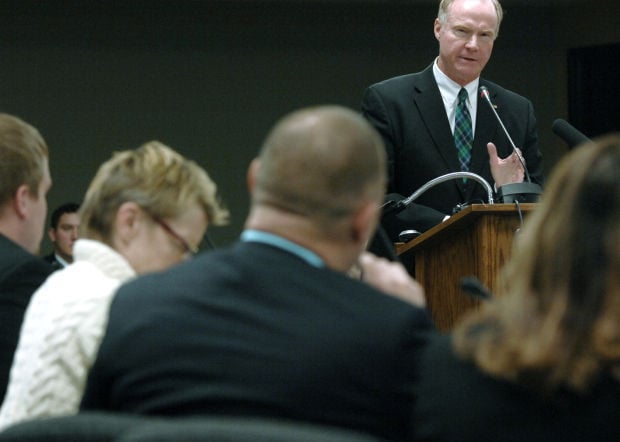 Haakenson said he registered the trade names in an attempt to interfere with the nickname selection process, though a UND official said such an attempt was unlikely to succeed.

After the NCAA threatened sanctions if UND continued to use the Fighting Sioux nickname, a UND committee in July settled on five replacement options: Fighting Hawks, Nodaks, North Stars, Roughriders and Sundogs. UND stakeholders — including students, staff, faculty, alumni and donors — will be given the chance to vote on the replacement at a later date.

Supporters of the old nickname rallied for the inclusion of a sixth option, North Dakota, but a committee appointed by UND President Robert Kelley opted not to include that choice.

Haakenson, who attended North Dakota State University but says he's a supporter of the Fighting Sioux nickname, said he registered the trade names Fighting Hawks, Nodaks and North Stars with the North Dakota secretary of state in order to prevent UND from using them.

"As far as I'm concerned, Kelley will never get permission from me," Haakenson said. "I'll use every legal means I have to stop him from using the names."

Haakenson said he filed the paperwork to register the trade names on Sept. 4, though they were not officially registered until Monday. He was prevented from registering a fourth name, Roughriders, because Secretary of State Al Jaeger said it was too similar to an existing registered trade name in the state.

Haakenson said he was unable to register Sundogs for that reason, though Jaeger said it was unclear whether an existing trade name would prevent Sundogs from being registered.

"Until we do the research, we don't make any final determination," Jaeger said.

UND could run into the same problem as Haakenson if it tried to register Roughriders, Jaeger said. He said they might have to gain permission from the current trade name holder.

Jaeger said that, unless a trade name proposal conflicts with something that already exists, he has no legal basis to deny a trade name registration.

"We don't pass judgment on what is on the document," he said.

In Haakenson's case, all three trade names are registered as "Real Estate -- Personal."

Although it's unclear whether Haakenson's efforts would prevent UND from registering the trade names, he has successfully made it a question for the courts to decide, Jaeger said.

"Once it's recorded, we are an office of record. That's all we are," Jaeger said.

Johnson used the example of Roughriders.

On the North Dakota Secretary of State's website, there are five registered entities in good standing that include Roughriders, including a motorcycle club, an apothecary and a welding company.

Haakenson expressed confidence in his effort, saying he sees his effort as ultimately working to return UND to the Fighting Sioux.

"I will predict that sometime in the future, maybe long after I'm dead and gone, the name will come back," he said.

June 30 is the last day for consumers to apply for a refund of state fuel taxes paid on gasoline and gasohol last year.

The death of a Beulah teen missing for more than a week last month has been determined to be an accidental drowning. The body of 18-year-old Tyler Schaeffer was recovered from the Knife River on May 11. A search was launched after Schaeffer was last seen May 1. The State Forensic Medical Examiner’s Office ruled that Schaeffer’s cause of death was an accidental drowning. The office also determined alcohol use was a significant factor in his death.

U.S. Sen. Kevin Cramer is recovering after a hand injury that he suffered in an incident involving a boulder at his Bismarck home over the wee…

The sale of a couple thousand acres of prime North Dakota farmland to a group tied to Bill Gates has stirred emotions over a 1932 law meant to protect family farms and raised questions about whether the billionaire shares the state’s values. State Attorney General Drew Wrigley has asked the trust that acquired the land to explain how it will satisfy the state’s anti-corporate farming law. It prohibits all corporations or limited liability companies from owning or leasing farmland or ranchland, with some exceptions. Wrigley says the inquiry is a “matter of course” and not meant to stick “a finger in the eye of Bill Gates.” The state's agriculture commissioner, Doug Goehring, says he's heard from people who “feel they are being exploited by the ultra-rich.”

Leaders of a recall effort targeting Gov. Doug Burgum and Lt. Gov. Brent Sanford appear to have come up short.

FARGO — In the biggest protest and march in Fargo since the George Floyd rally in the summer of 2020, more than 1,000 residents rallied and ma…

The South Dakota Senate convicted Attorney General Jason Ravnsborg of two impeachment charges stemming from a 2020 fatal accident, removing and barring him from future office. The votes Tuesday were a stinging rebuke that showed most senators didn’t believe his account of the crash. Ravnsborg told a 911 dispatcher the night of the crash that he might have struck a deer or other large animal, and has said he didn’t know he struck a man — 55-year-old Joseph Boever — until he returned to the scene the next morning. Lee Schoenbeck, the chamber's top-ranking Republican, said there was no question in his mind that was a lie. Ravnsvorg “ran down an innocent South Dakotan,” he said. Ravnsborg declined to address lawmakers. He has maintained he did nothing wrong.

An American Indian head logo stands on the exterior of Ralph Engelstad Arena, a sports arena on the University of North Dakota campus in Grand Forks on March 22, 2010. 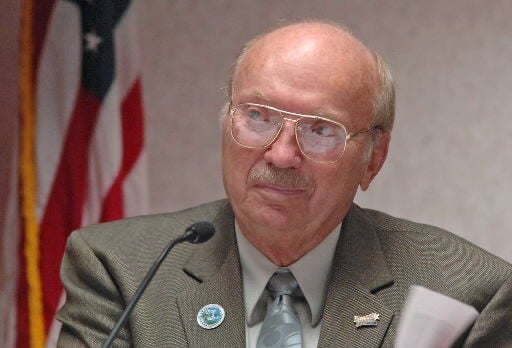