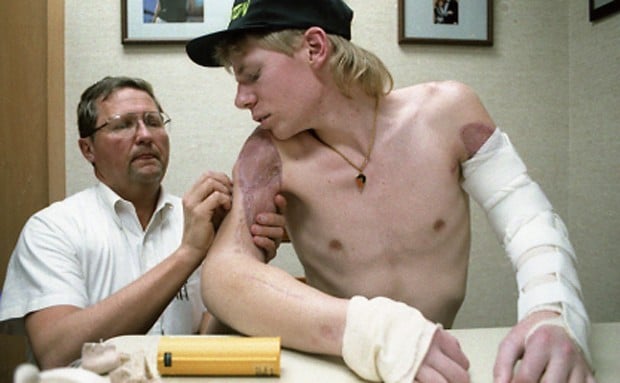 Dr. Curt Juhala, a Bismarck plastic surgeon, examines skin grafts on John Thompson on April 7, 1992. Thompson's arms had been surgically reattached four months earlier at North Memorial Medical Center in Robbinsdale, Minnesota. Thompson's arms were ripped off in an accident at his parents' farm in Hurdsfield. 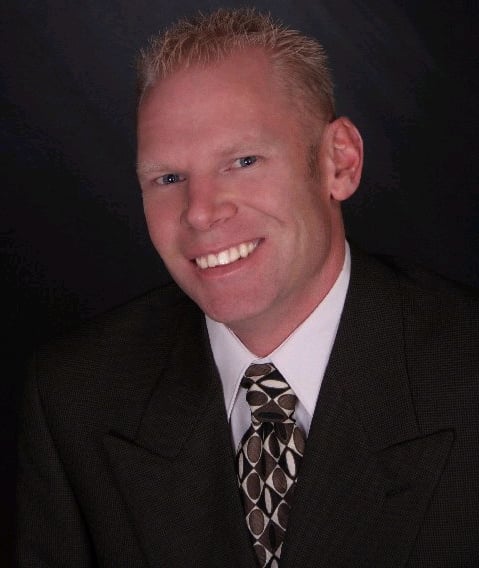 A 2012 photo of John Thompson, 20 years after his arms were ripped off in a farm accident near Hursdfield, N.D. His arms were reattached in a story that made international news.

After 20 years and more than 30 surgeries, the story of an 18-year-old farm boy who had his arms ripped off in a piece of old farm equipment follows him everywhere.

"To me it was like it was yesterday," said Karen Thompson, John's mother. "It's almost like a branding iron when these tragedies happen. It's just embedded in you."

On Jan. 11, 1992, a teenager who hated being in front of a crowd was working on his family's farm in Hurdsfield. He was home alone when his arms got caught in a tractor's power takeoff. He was knocked unconscious.

When he woke up, his arms were gone. But he still got up, walked to his house and called for help using a pencil in his teeth. Then he sat in the bathtub until help came, so he wouldn't drip blood on the new carpet.

Surgeons reattached his arms and his story became international news.

That story became international news. Twenty years later, Thompson still gets noticed as "the kid in the bathtub."

That's not John Thompson's story anymore. He's told the story so many times, in front of so many people, that it feels like he's talking about somebody else, telling somebody else's story.

To Thompson "it's not a big deal" anymore, and it "embarrasses" him when people ask to hear the story, the story they probably already know, he said.

"I say 'I had my arms ripped off' and pretty much leave it at that," Thompson said. "It's just something that happened."

But the accident changed every aspect of his life — how he eats, gets dressed, drives a car and even smokes a cigarette.

Thompson has been living in Minot for the last four years, working as a Realtor. But today, he's unemployed and living off disability. Most employers won't give him a chance because of his disability, Karen Thompson said.

"It's not like he can do what the others his age can do," she said.

After having his arms reattached and trying to regain some normalcy in his life, Thompson went to school at the University of Mary. He didn't graduate and after about two years, he began touring full-time telling his story, talking about farm safety and motivating others to persevere. He gave that life up in 1995, after the road wore him down physically and emotionally.

In 2002, he published a book, "Home in One Piece," about his life. He wanted to put the accident behind him, but it only made his life more hectic. Thompson hit the road again, this time doing book tours, and "Home in One Piece" became a bestseller in the Midwest.

He also got into politics, something he had always enjoyed, and ran for the state House in District 40 in 2004. Thompson said he dropped out, but was still on the ballot that year.

Now, Thompson's considering leaving North Dakota and the cold winters, and moving to someplace warm like Arizona. He can't wear gloves, so he uses socks to keep his hands warm. The cold also makes the arthritis in his arms worse and the pain that comes with it.

His physical strength continues to deteriorate, and even collecting socks out of the bottom of the drying machine is difficult for him.

"My arms don't go straight," he said. "I pretty much have to climb in there to get the clothes out."

During his time as a Realtor, he had trouble using keys and opening the doors of the houses he was showing. He often had to hand the keys to a client.

"(My hands) are always in a fist, curled up, so it's hard to grab things or carry things," he said.

Things are more difficult for Thompson, but he still does them. He can't button a shirt, but he can slip an already buttoned one over his head. He can't write legibly, but he's a better typist now than he was before the accident. And he can't shake your hand, but he likes fist bumps.

While others have said he should have done more with his life, he doesn't feel that way. He has good friends who care about him and will come over to change a burned out light bulb. He's close with his family.

"I can almost sense from miles if he's having a bad day, and he does the same with me," his mother said.

Thompson would like to get back into speaking or politics on a local level. Telling his story still gives him a purpose and makes him feel like he's making a difference. That's all he really wants: to help others, his mother said.

"Everybody needs to be needed, and that's what he's looking for," Karen Thompson said.

Dr. Curt Juhala, a Bismarck plastic surgeon, examines skin grafts on John Thompson on April 7, 1992. Thompson's arms had been surgically reattached four months earlier at North Memorial Medical Center in Robbinsdale, Minnesota. Thompson's arms were ripped off in an accident at his parents' farm in Hurdsfield.

A 2012 photo of John Thompson, 20 years after his arms were ripped off in a farm accident near Hursdfield, N.D. His arms were reattached in a story that made international news.