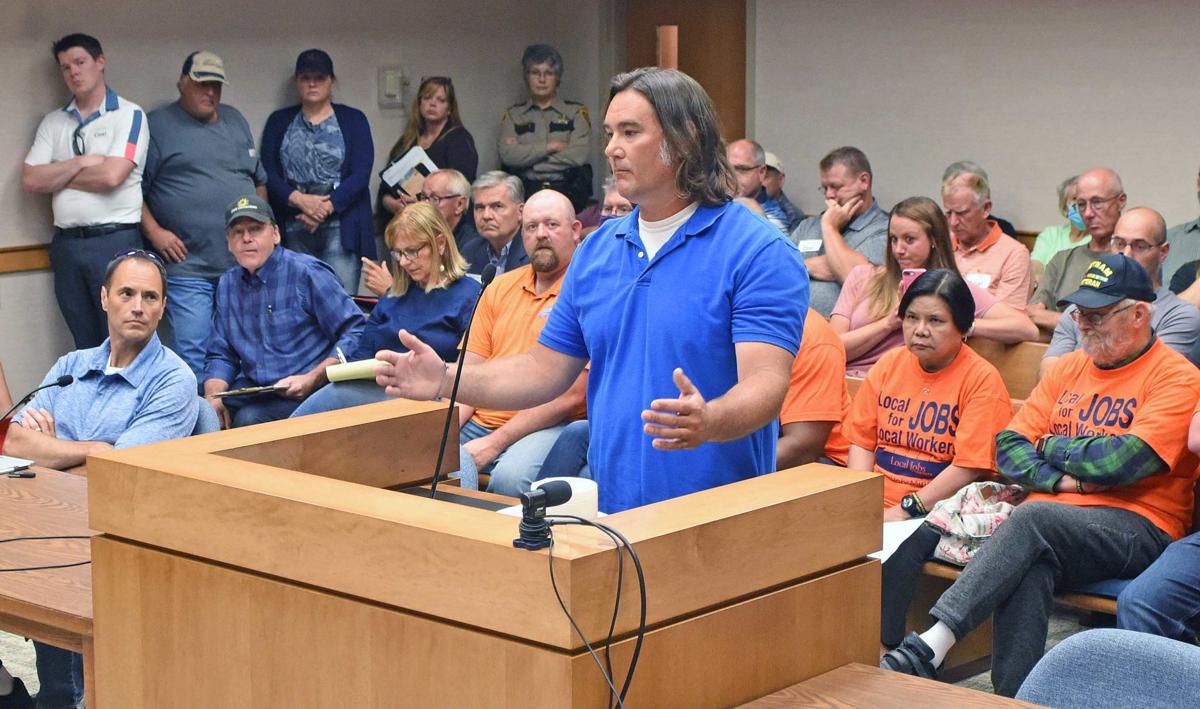 Hazen-area farmer and rancher Roy Rasch asked the Mercer County Commission to lift its moratorium on wind development. He has leased land with Capital Power, which is proposing a wind farm north of Hazen. 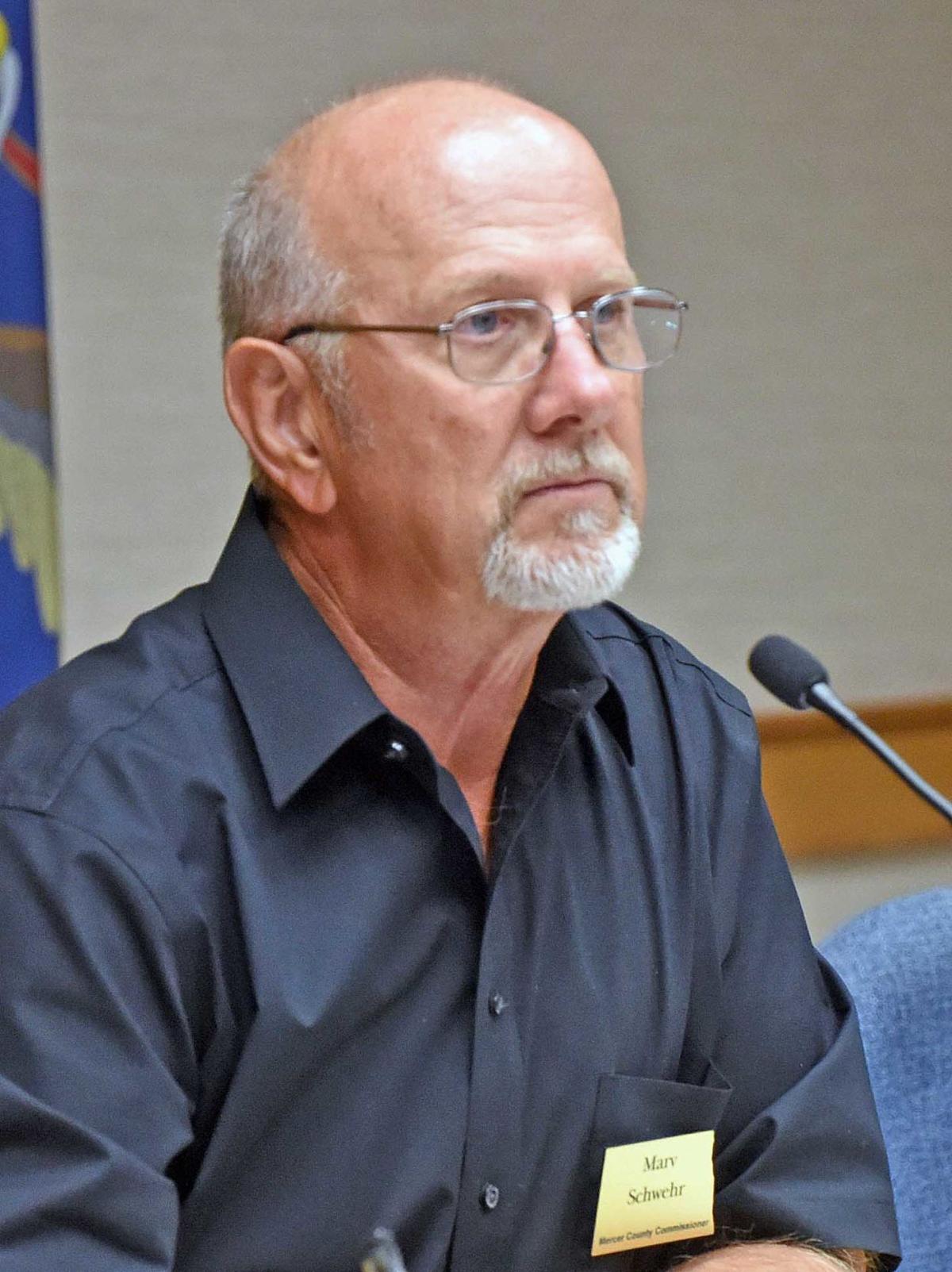 STANTON – The latest sign of tension over wind power in North Dakota’s coal country played out Wednesday in Stanton, where landowners, construction workers and a wind farm developer asked the Mercer County Commission to reconsider a moratorium on wind-related projects.

The commission issued the moratorium in May on zoning applications related to wind energy as Alberta-based Capital Power seeks to build a wind farm north of Hazen and Stanton. The measure will stay in place until May 2022 unless the county lifts it earlier, something commissioners will discuss at their next meeting July 15.

“If they build the wind farm, is that going to change what happens to coal?” asked Roy Rasch, a landowner north of Hazen, to commissioners at Wednesday’s hearing. “I don’t think it does.”

Two North Dakota coal plants are slated to close in future years, including the state’s largest, Coal Creek Station. Owner Great River Energy says the facility faces financial woes as it competes in the regional power market, which has experienced a surge of cheap natural gas and renewable power in recent years.

Rasch has leased some of his land to Capital Power to build the proposed Garrison Butte Wind project.

“This is a steady source of income for my family,” he said. “This ensures my ranch and farm survives.”

The commission also heard from a number of coal supporters who want the moratorium to stay in place.

Hazen resident Anna Novak recently collected signatures from community members for a letter to the commission, an effort organized by Faces of North Dakota Coal, a group started by a Beulah coal worker that has gathered a prominent following on Facebook. Nearly 500 people signed onto the letter, saying they want to keep the moratorium.

“People are scared that they are going to lose their jobs and that Hazen and Beulah are going to become ghost towns,” Novak said.

Her son helped collect signatures, walking door to door with her. The father of one of his best friends is a GRE employee who expects to lose his job in 2022 when Coal Creek shuts down. Her son cried when he heard the news earlier this year that the facility is slated to close.

“He knows that that friend and many others might have to move away, and that we might too,” she said.

Anxiety has spread in North Dakota’s coal-producing counties ever since rumors began circulating at the start of 2020 that Coal Creek could shutter. The company finally made the announcement in May.

The uncertainty surrounding the facility prompted McLean County, which borders Mercer County and is home to Coal Creek, to place new restrictions on wind power in March that make it tougher to connect power lines to GRE’s high-voltage transmission line that runs from Coal Creek to Minnesota.

The Mercer County moratorium, however, does not directly target GRE’s plans. It most imminently affects the proposed Garrison Butte wind farm, which would consist of turbines across more than 22,000 acres, according to a fact sheet on Capital Power’s website. The facility would have a 152-megawatt capacity.

The project also includes plans for a transmission line connecting the wind farm to GRE’s Stanton Station interconnection, which has not been connected to any new sources of power since the company closed the small coal-fired power plant in 2017.

Capital Power business developer Bob Evans said in a letter to the commission that the company might lose its opportunity to connect the wind farm to the power grid if it cannot secure a permit from Mercer County “in the near term.” The company submitted its application to the county earlier this week, according to a county official.

“What the moratorium resolution will do is put much needed economic stimulus at risk,” he said. “Revenue to landowners will be lost. Decades of new taxes to this county will disappear, and jobs created during the construction will never materialize.”

Evans’s letter was read to the commission by a local company representative because he was unable to travel to the meeting due to the coronavirus pandemic.

He added that the company also generates power from coal and is “not here to kill coal.”

Several members of the Laborers' International Union of North America Local 563 told the commission that they want to see projects like the Garrison Butte wind farm come to fruition. Such projects would provide jobs to North Dakota construction workers if developers opt to hire local labor.

The union, in a report released Wednesday, estimates the Garrison Butte wind farm would create 150 construction jobs, generating roughly $93,000 per worker in total economic activity as payroll spending circulates through Mercer County and the region.

Union members work in various aspects of the energy sector, including at coal plants and on wind farms.

“Behind me there are laborers that work in these coal plants, said Steve Cortina, a union marketing representative, motioning to several others in attendance at the hearing. “They want to make sure they can continue working here. If you take away that from them, people will leave the state.”

Several local officials asked to keep the moratorium in place so the commission could spend time studying what wind power would mean for communities, financially.

Hazen Mayor Jerry Obenauer said he knows “there is room in the sandbox for everybody to play” and is not against other forms of energy, but he said coal makes up a significant chunk of revenue for the city.

Coal taxes comprise 50% of the city’s general fund budget, a figure that’s dropped in recent years and will likely fall more in the years ahead if coal mines and plants close, he said.

“How are we going to continue to operate our community the way we have, fortunately, for the last 40-plus years?” he asked.

John Phillips, chairman of the North Dakota Coal Conversion Counties, an arm of the Western Dakota Energy Association, said his group has already been in communication with local coal and power companies about the region’s changing energy landscape. He said he believes the group would be a good conduit for counties to work through wind and coal issues.

McLean County State’s Attorney Ladd Erickson, who authored his own county’s ordinances that target wind, also addressed the Mercer County Commission. He suggested that the commission consider requiring that wind developers secure a purchaser for a wind farm’s output before the county grants a permit, as well as approval from the grid operator to connect a project to the power grid.

“I think counties need to start getting into the business of requiring purchase power agreements and grid interconnect proof before you do any zoning,” he said.

He envisioned a scenario in which a county OKs a wind farm, prompting roads and cement to go in for the facility, only to have all work halt if the project hits another hurdle.

“Your landowners just end up with nothing,” he said.

The commission did not take another vote on the moratorium at Wednesday’s hearing, except to table the matter until the next meeting. Commission Chairman Marvin Schwehr said he would like time to process the information the county received. The wind project also requires a permit from the North Dakota Public Service Commission before it can be built.

The Mercer County Commission plans to keep its moratorium on applications for wind farm permits while it reviews its policies surrounding wind power.

Nearly five months after Great River Energy announced it plans to close Coal Creek Station, it’s unknown who will make use of the transmission line that extends from the power plant to Minnesota.

Hazen-area farmer and rancher Roy Rasch asked the Mercer County Commission to lift its moratorium on wind development. He has leased land with Capital Power, which is proposing a wind farm north of Hazen. 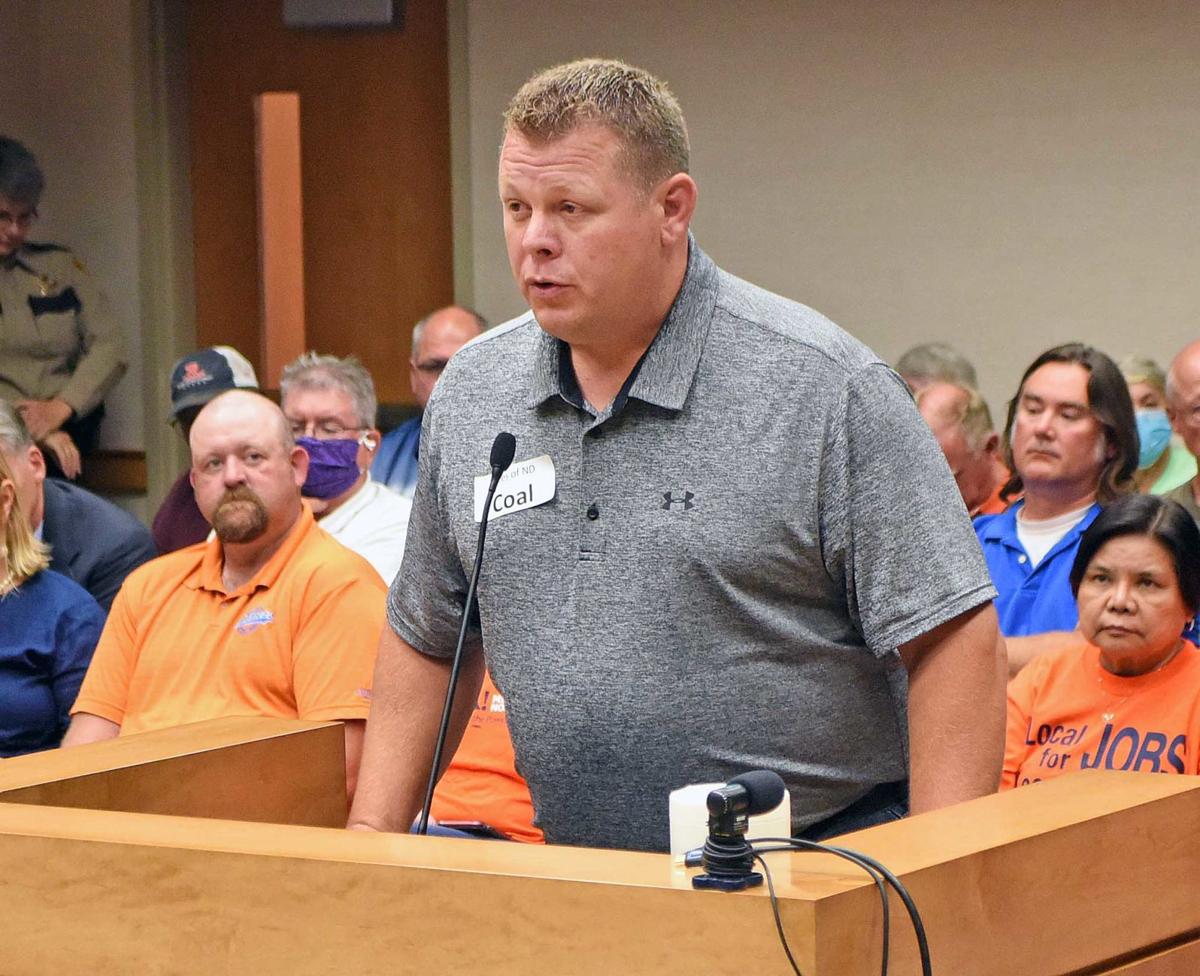 Hazen Mayor Jerry Obenauer urged the Mercer County Commission to keep it moratorium on wind power in place to further study the economic impact of the wind industry in the area. 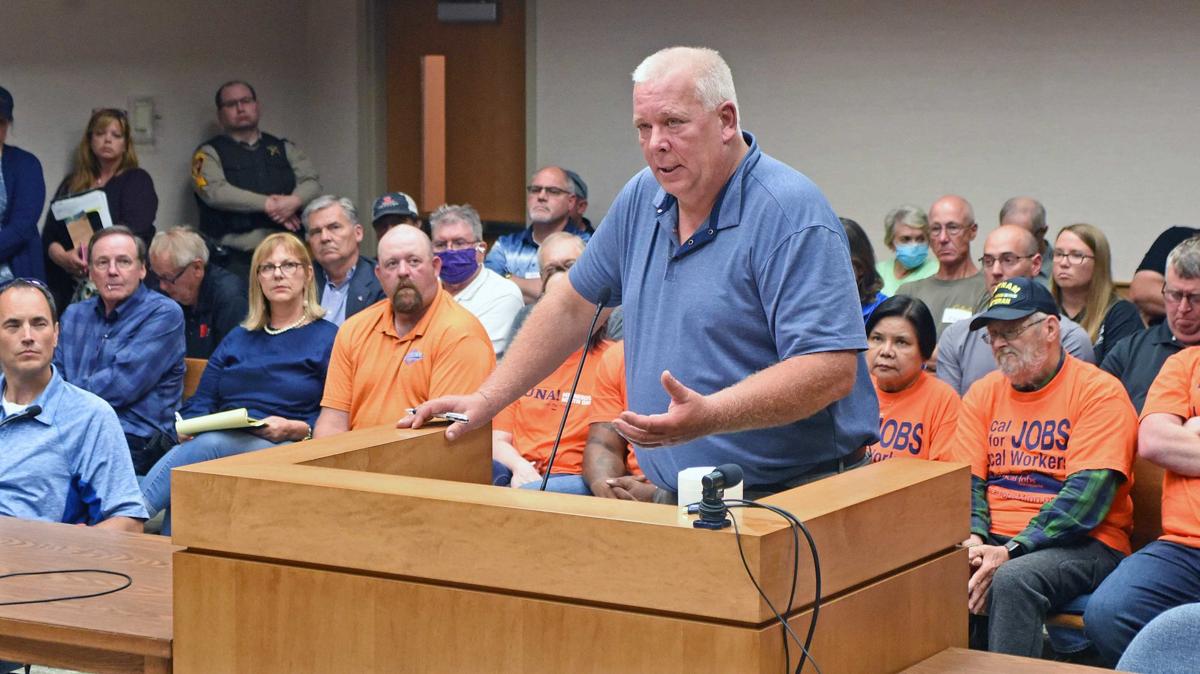 Ladd Erickson is the McLean County state's attorney. He authored new zoning restrictions on wind development in his county.