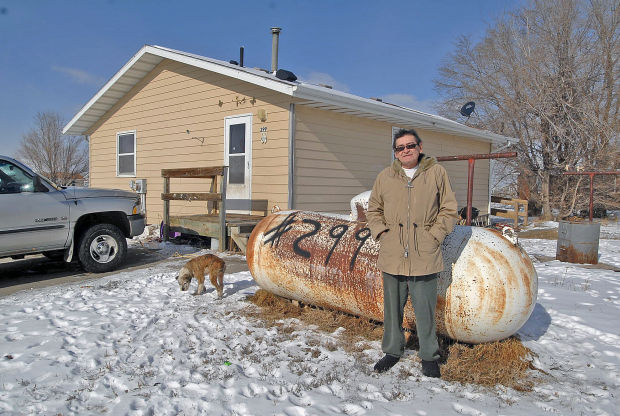 Blaine Claymore stands next to his propane tank outside his house in Fort Yates, North Dakota on 2-5 afternoon. Claymore said the cold winter has increased the amount of propane he uses to keep his house warm. 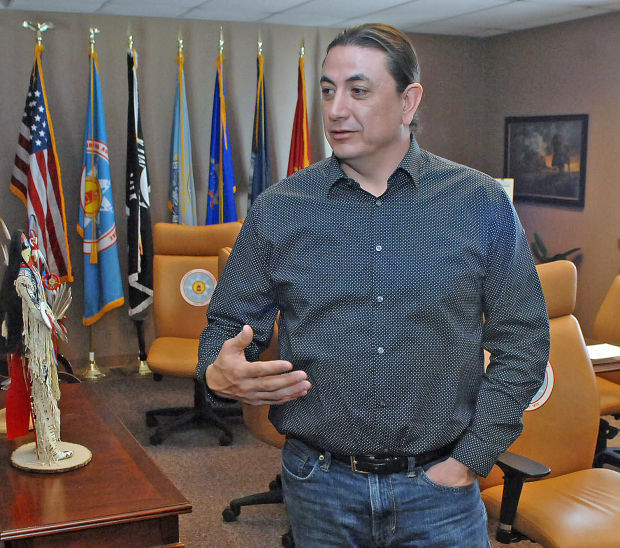 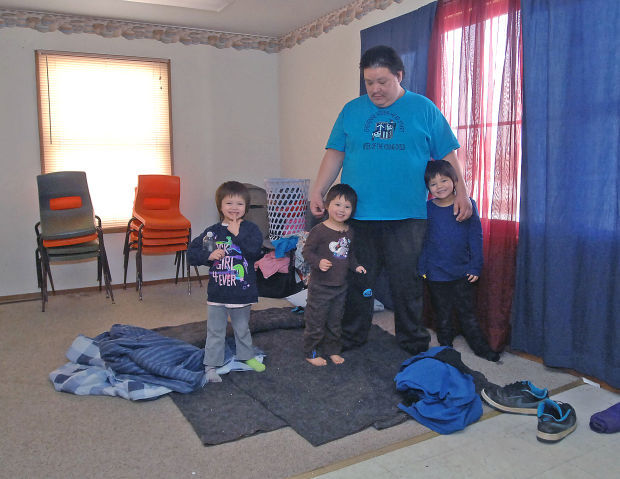 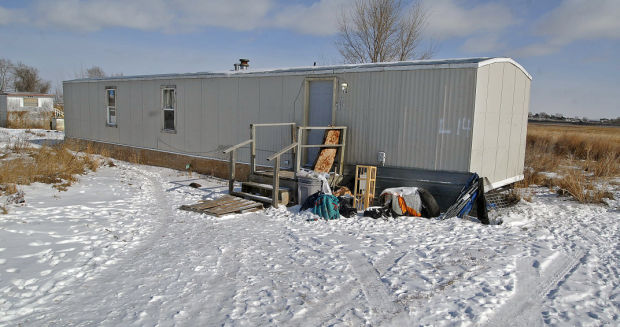 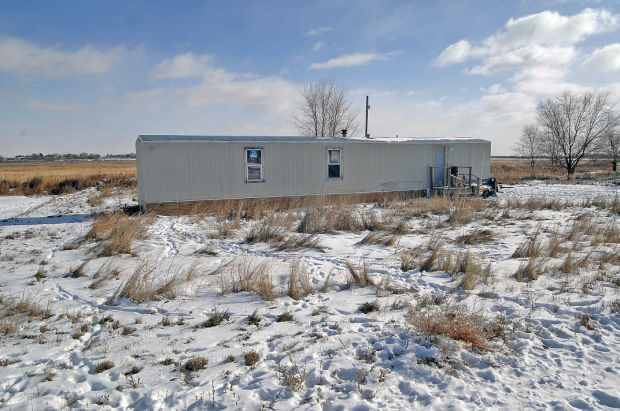 FORT YATES — Blaine Claymore taped around the edges of his north-facing door and windows, an attempt to keep out the cold air and keep in the propane-heated air in his Standing Rock Housing Authority home.

Claymore keeps a close watch on his propane tank and calls for a refill as soon as it goes down to 30 percent. Because he and his wife have disabilities, they get propane quickly when they call for it. That’s not the case for everyone.

Short supplies of propane have been a problem nationwide this winter, in part because of demand from drying a late, wet grain crop and in part because of unusually cold weather in much of the country. Propane prices more than doubled last week but have started to go down. The prices have made it expensive to heat homes, and the problem is exacerbated on the Standing Rock reservation because of poverty and housing problems.

Authorities are investigating the death of Debbie Dogskin, who was found dead Tuesday morning in a Fort Yates mobile home with an empty propane tank. Tribal chairman Dave Archambault said an autopsy is scheduled for Thursday, with results possible by Friday. He isn’t speculating on the cause of death, though Sheriff Frank Landeis called it the county’s first cold-weather fatality of the year on Tuesday. Landeis said it was as cold in the trailer as outside of it.

Officials didn’t disclose the location of Dogskin’s home, though neighbors pointed it out. Several people said Dogskin also had been drinking heavily prior to her death. Lori Little Warrior, her next-door neighbor and cousin, said she had carried Dogskin home Monday night after Dogskin sprained her ankle on the road outside Little Warrior’s home. She said Dogskin didn’t look well.

Propane is the dominant heat source on the reservation, which straddles the North Dakota-South Dakota border, Archambault said Wednesday. Historically, it has been an inexpensive way to heat homes. The recent price increases, some in the area of $5 per gallon, have strained already limited household budgets, Archambault said. The tribe has declared a state of emergency.

Cedric Goodhouse, a community manager in Fort Yates, said the propane situation is affecting a lot of families. His daughter, who served two tours in Iraq as a Marine, has been unemployed since October. She isn’t receiving any public assistance and doesn’t have any income. However, she was denied heating assistance recently, and she, her son and her boyfriend had to live with Goodhouse and his wife for awhile and also a cousin when their propane ran out.

Archambault said the tribe’s emergency management task force was told to identify emergency shelters in each of the reservation’s eight districts. So far, there only has been need for a shelter in Fort Yates and in Wakpala, S.D. If the propane cost drops enough that no one is using the shelters, they’ll close those, too, he said.

Goodhouse assumes Dogskin’s family knew of the shelter prior to her death.

There was one family staying at the shelter on Wednesday — Wade Jeffries, Jessica Pleets and five of their daughters. Jeffries said they weren’t at the shelter because of propane issues though; they didn’t have anywhere else to stay, and the tribe told them to stay there.

Archambault said the tribe also is concerned with the number of homeless people in the community. There is little available housing on the reservation, and there are multiple families in some homes, which takes a toll on the structures. He said it’s hard to compare the situation to the rest of the state — where homelessness has increased with the growing population — because the reservation has experienced recession symptoms for decades.

“We’ve been here for awhile, and we’re trying to climb our way out,” he said.

People in need of a place to stay sometimes are directed to the domestic violence shelter or the veterans’ home, because there is no homeless shelter there, he said.

Archambault said the tribal Housing Authority runs most of the homes on the reservation. The authority has been monitoring the propane at homes under its programs and has tried to keep something in the tanks.

Many people also receive assistance through the Low Income Home Energy Assistance Program, though the federal funding for the program was $1.6 million for this year, down from $2.5 million last year, Archambault said. He said the tribe is trying to find ways to provide additional heating assistance.

When a person already is living week to week, paycheck to paycheck, an unexpected increase in cost for something as necessary as heating means other needs might not get met, Archambault explained. Even the people who are working may not have the disposable income necessary to absorb that kind of blow.

“There were homes at zero (propane) or close to zero before the weekend,” he said.

Claymore said he and his wife live rent free in their home on the west side of Fort Yates, not far from the home where Dogskin died. However, they have to pay utilities, sometimes with help from the tribe and LIHEAP.

The house is substandard, like many of the housing authority buildings on the reservation, Claymore said. Maintenance work and weatherizing need to be done, but Claymore, a former maintenance worker, can’t get around enough to do it on his own. Claymore and his wife are both veterans and both have disabilities.

The north-facing door won’t stay closed, leading Claymore to duct tape around its edges, and the windows weren’t meant for a North Dakota winter. He said the propane goes fast in the leaky house. They keep the windows closed and have turned the heat down as much as they can handle to conserve energy.

Claymore’s wife had one knee replacement surgery last year and another recently, and it’s not healing well. Trips to Bismarck for appointments sap an already tight budget. Finding money to put toward propane has been difficult, and now the money isn’t buying as much as it usually does.

Archambault said people are encouraged to watch their supplies, as Claymore does, and to call for more before they get down to zero. The tribe is working with propane vendors, including the tribal propane company, and asking them not to put parameters on how much people are required to purchase at one time. That way, people can put in only as much as they can afford until the price drops, he said.

“We’re doing what we can,” Archambault said.

Propane prices on way down

Blaine Claymore stands next to his propane tank outside his house in Fort Yates, North Dakota on 2-5 afternoon. Claymore said the cold winter has increased the amount of propane he uses to keep his house warm.