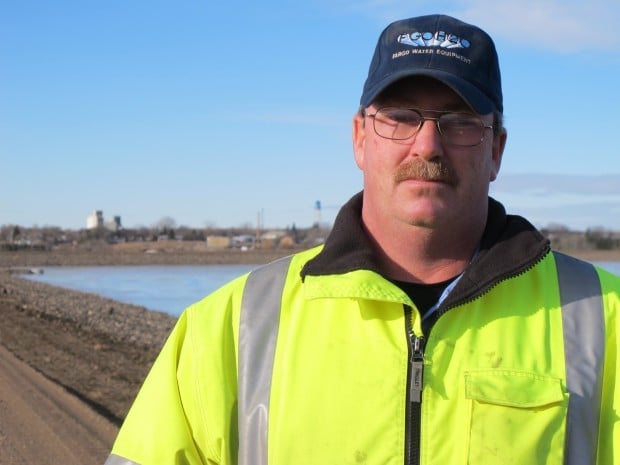 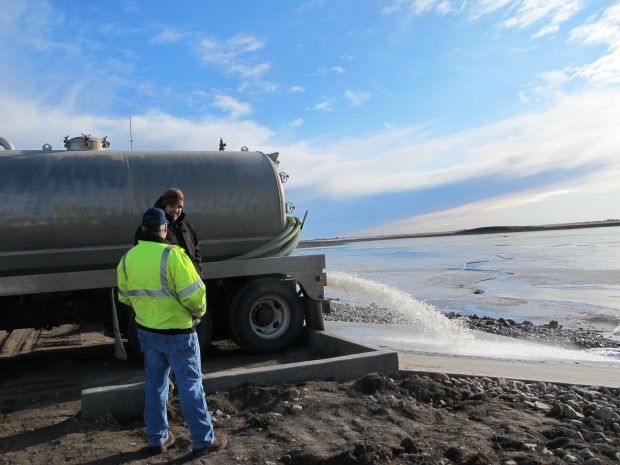 Stanley City Coordinator Ward Heidbreder (in yellow) with a septic pumper hauler at the city's new lagoon cell. Heidbreder said the city can accommodate some outside wastewater, but doesn't want to take all it's asked to in order to make room for city growth. 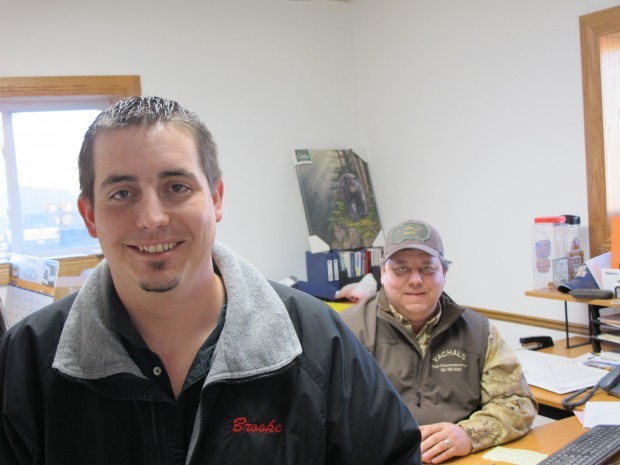 Father and son Beau and Curt Vachal, of Stanley, plan to build the first stand-alone lagoon in the oil patch to deal with wastewater from rigs and worker camps. Most cities refuse outside waste because they're running out of capacity.

State regulators say a plan by Curt and Beau Vachal, owners of MonDak Water and Septic Services, to build one and possibly several more in the oil patch could help solve the problem of a growing amount of such waste and fewer places to take it.

Wayne Kern, who directs the Municipal Facilities Division for the North Dakota Health Department, says the Vachals are on to something.

"We'd welcome the construction of strategically placed regional systems, so we know it's being properly done," Kern said. "Conceptually, this is a great idea. We would welcome someone to step up. It's a needed service."

North Dakota's oil patch pumps out nearly 510,000 barrels of oil every day and in the range of 500,000 gallons of sewage wastewater from rigs, man camps and worker housing in the same 24 hours.

The first crude product is very valuable and the second is very costly, the consequence of 10,000 workers using at least 50 gallons of water every day to shower, shave and do their daily business.

The numbers are generated by a rough estimate of workers housed outside of municipal limits and services, based on information from oil producing counties.

Local zoning has been approved for Vachals' privately owned lagoon in southern Mountrail County near Highway 1806, though the state Health Department will have to approve the engineering design before construction can start.

Locals are getting used to seeing oil rigs and wells here, there and everywhere. But a 10-million-gallon annual capacity lagoon in the middle of nowhere will take some getting used to, which may account for the several months the Vachals' plan took to clear public zoning hearings.

The two plan to start with one in Mountrail County and then take the idea and build another three further afield into the oil patch, where the strain on existing wastewater lagoons has forced most cities to put up "Closed" signs to outside septic haulers.

Kern said the oil patch is developing so rapidly that state and local health departments are often catching up, rather than approving waste treatment projects before they start.

He said the health department has a pretty good handle on wastewater plans and facilities at the larger worker camps, but not at the hundreds of smaller ones that have popped up all over the oil patch.

"There's a lot of confusion, it's going so fast and hard," Kern said. "Anybody would be less than honest if they said they had total control. We do the best we can."

Mountrail County declared a moratorium on man camps until it gets a handle on what it already has and develops sound planning for more.

The county zoning coordinator, Don Longmuir said sewage is one of the major issues it wants to solve.

"We will need to see a sewage plan up front. These are things we never thought about, but even all the rigs have (waste) that needs to be hauled out," Longmuir said.

Tri-State Services of Baker, Mont., came upon several "Closed" signs trying to finalize a contract to haul sewage wastewater from a new 600-bed man camp being built by Target Logistics in southern Dunn County, not far from Dickinson. The first phase of the camp will open at the end of the month.

Guy Weimer, of Tri-State, said they've been turned down by Dickinson, Killdeer and Bowman. He's hopeful of getting a contract with Bismarck, even if it's a 120-mile one-way trip.

"This is 98 percent gray water and we can't get rid of it," Weimer said. "It's pretty bad when you're hauling that far to get rid of it. The state of North Dakota and the counties put their hand out and they want your money, but they haven't come up with the facilities."

Bowman Mayor Lyn James said the city turned down Tri-State to preserve and protect the extra lagoon capacity is has now for its own future growth, maybe another 500 population, or so, before it would have to expand.

"If you look anywhere in the oil producing counties, the infrastructure can't handle more. Maybe some of the bigger companies can partner with locals to expand these facilities," she said.

In Stanley, where the Vachals are headquartered, city superintendent Ward Heidbreder checks on the city's new 31-acre lagoon cell, in which only 2 inches of wastewater have filled in since it went into use just after Christmas.

With worker housing and the town filled to the bursting point, the best guess at Stanley's population is 2,300, about 1,000 more than were officially counted two years ago.

He said the city will take some septic pumper waste, but not much.

"We don't want to take anything from just anybody. We're trying to balance it out with what the community needs. We want to keep it limited so we don't have to kick anyone out of here," he said. The city charges $30 a load.

He, too, thinks the Vachals have a good idea.

"There is no place for the commercial hauler unless they're doing land application," he said. He knows there's illegal dumping going on by some septic pumpers. "There's such a workload, the driver's just looking to get his work done," Heidbreder said.

The Vachals dump most of their man camp and rig wastewater on crop and hayland in Mountrail and Williams counties, in a practice called land application.

Land application is accepted by state and federal health and environmental regulators when it's done properly. It isn't necessarily accepted by everyone and the North Dakota Health Department has fielded several odor and runoff complaints from rural Williston residents who weren't pleased with the man camp waste on nearby fields, said Marty Haroldson, the state's septic pumper coordinator.

Haroldson said he surveyed septic pumpers several months ago and found "a lot" of land application going on in the oil patch, probably in response to city systems reaching their capacity.

His numbers from late last year found that 17 septic pumpers were hauling nearly 2 million gallons of wastewater out of the oil patch every month and six of those were doing some or all land application.

Haroldson recently sent out a memo reminding septic pumpers what the rules are for land application. They are not particularly onerous, but a requirement that non-Ph adjusted waste has to be tilled into the land within six hours isn't feasible when crops and hay are in the growing phase.

Curt Vachal said sampling analysis shows the septic waste amounts to mostly water and a very low nitrogen fertilizer. Beau Vachal said farmers tell him, "Just bring as much as you want. Their alfalfa is six to 12 inches taller."

The Vachals said even though some septic haulers illegally dump in ditches or fields without permission, land application helps grease the wheels of the oil patch, which could slow down if septic pumpers routinely had four hours of windshield time between loads.

"If we have to start driving east of Minot 150 miles to dump a load, that's going to slow us down and inevitably be shutting down the oil field," Beau Vachal said. "This (lagoon project) is the solution that we came up with."

Curt Vachal said he and his son decided to get ahead of situation by building and operating the state's first stand-alone industrial lagoon. "Instead of (complaining) about the problem, we decided to fix the problem. This has never been done before. That's why we're going this big, to help out the other guys who are doing the same thing," he said.

Stanley City Coordinator Ward Heidbreder (in yellow) with a septic pumper hauler at the city's new lagoon cell. Heidbreder said the city can accommodate some outside wastewater, but doesn't want to take all it's asked to in order to make room for city growth.

Father and son Beau and Curt Vachal, of Stanley, plan to build the first stand-alone lagoon in the oil patch to deal with wastewater from rigs and worker camps. Most cities refuse outside waste because they're running out of capacity.