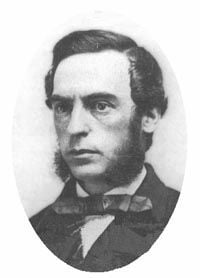 Mark Kellogg, a reporter for the Bismarck Tribune and New York Herald, was killed while covering the Battle of the Little Bighorn on June 25, 1876. 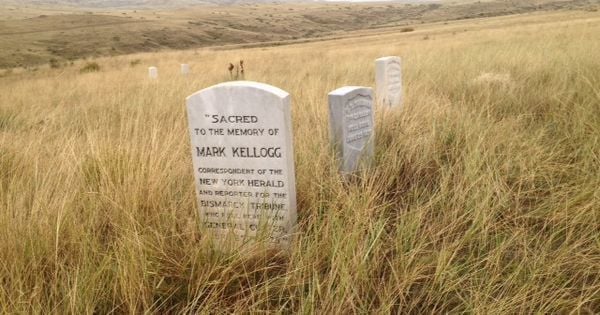 This marker at the Little Bighorn Battlefield shows where Mark Kellogg, a correspondent for the Bismarck Tribune and New York Herald, purportedly fell in the 1876 battle where Lakota, Cheyenne and Arapaho warriors defeated George Custer's 7th Cavalry. 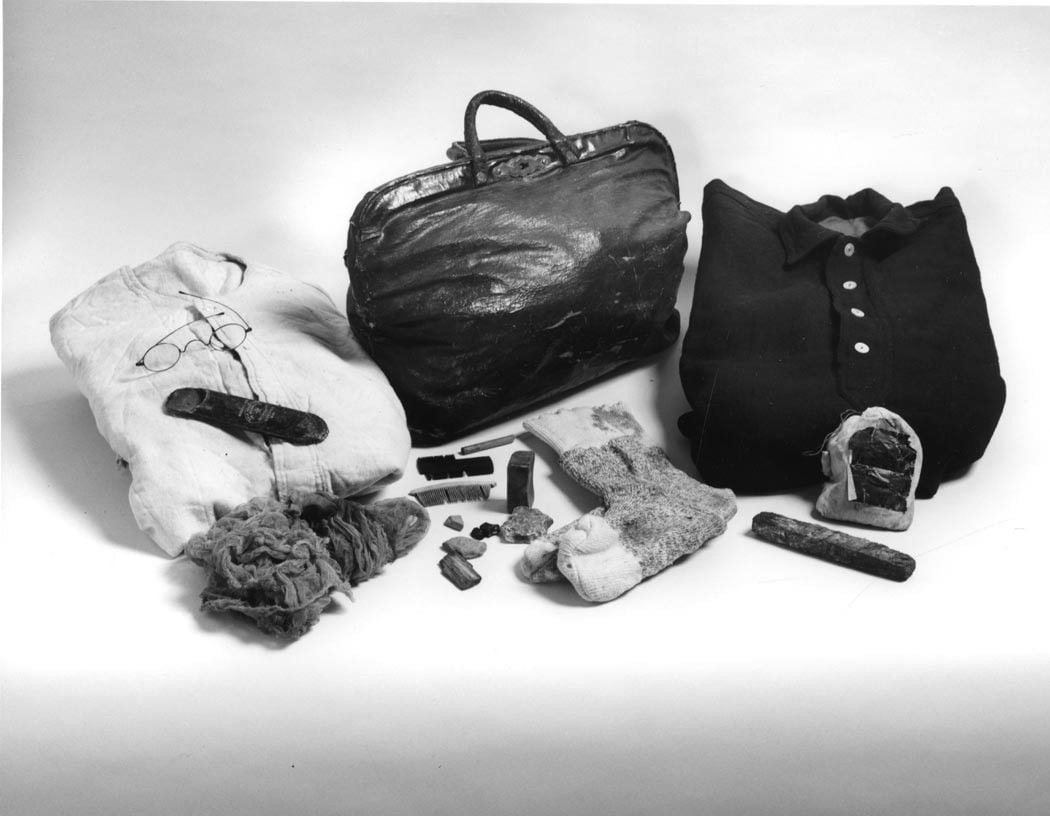 Personal belongings of Mark Kellogg, a reporter killed at the 1876 Battle of the Little Bighorn, in the collections of the State Historical Society of North Dakota. 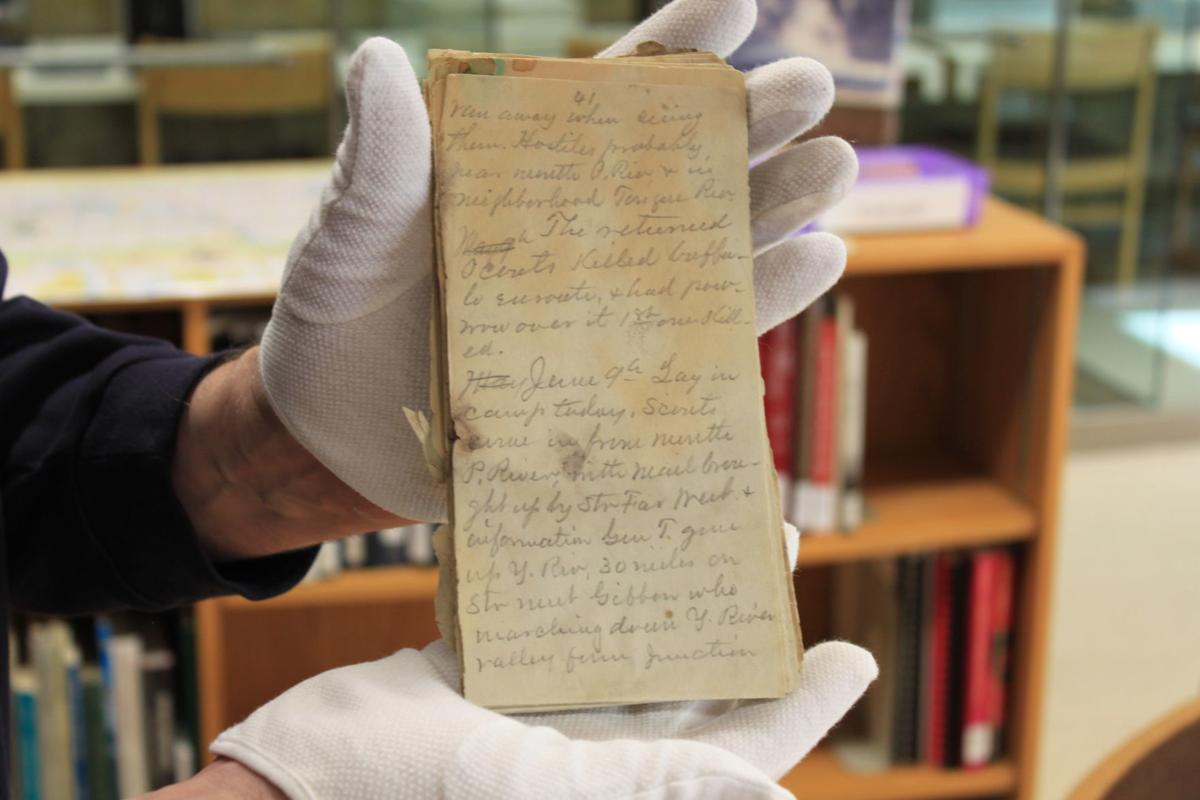 The State Historical Society of North Dakota has the diary kept by reporter Mark Kellogg, who accompanied George Custer's 7th Cavalry and was killed at Little Bighorn. Forensic testing concluded the stains on the notes, on loose paper, are not bloodstains. 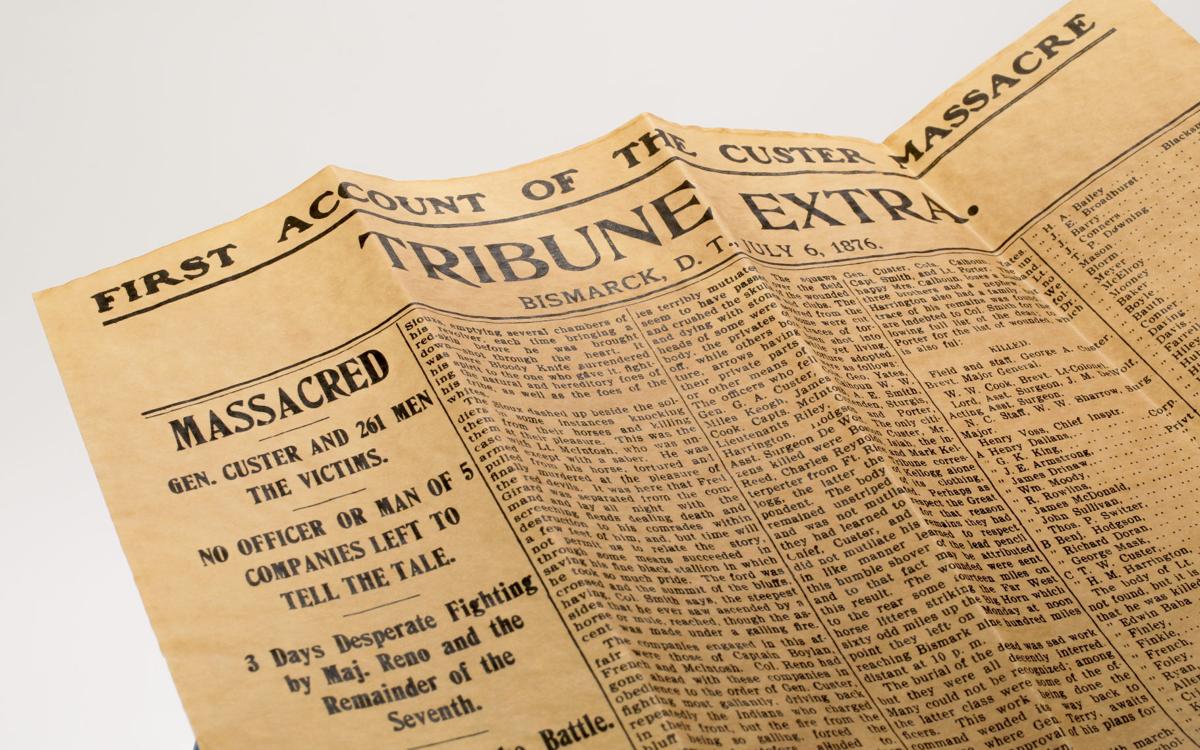 This reproduction of the July 6, 1876, issue of the Bismarck Tribune reports the Custer massacre.

Mark Kellogg was an itinerant journalist and telegraph operator who followed the Northern Pacific Railway as it forged an iron path through the Dakota Territory frontier.

After stints in Lacrosse, Wis., and Brainerd, Minn., Kellogg arrived in rough and rowdy Bismarck not long after the railroad reached town. He worked as a reporter for The Bismarck Tribune, whose press came in on the first train to reach town.

Kellogg, who had been born in Ontario, struggled in life. His wife had died in 1867 and the couple’s two daughters stayed behind in Wisconsin when he headed to the Dakota Territory in search of opportunity.

Then, in the summer of 1876, Kellogg got a career-boosting break. He was assigned to accompany Lt. Col. George Armstrong Custer in a military campaign against the Lakota and Cheyenne.

In fact, Kellogg was the only reporter allowed to accompany Custer, whose 7th Cavalry rode west into Montana Territory, where the holdout Native Americans gathered in defiance of an Army order to report to reservations, determined to continue the life of chasing the last of the roaming buffalo herds.

The soldiers’ march was arduous, through rough terrain, including the Little Missouri Badlands. The routine was grueling: The bugler blew reveille at 3 o’clock and soldiers struck camp at 5 a.m.

Kellogg, who rode a mule, called the trail through the rugged Badlands “tortuous.”

Only days after leaving Fort Abraham Lincoln, the troops found a fresh campfire left by the “hostiles,” Kellogg wrote in his diary, and days later they caught their first glimpse of Native Americans 3 miles away.

Trouble wasn’t expected, however, until they reached the buffalo range, the tributaries veining the grassland drainages of the Yellowstone and Powder rivers.

Kellogg’s diary ended abruptly 16 days before the June 25, 1876, Battle of the Little Bighorn. The day before, he noted that Native Americans had killed a buffalo and “had a pow-wow over it.” Four mounted Lakota warriors rode away when they saw Army scouts.

But the advancing Army’s mood was upbeat; the band often played at night. Officers’ biggest worry was that the Native Americans would melt away when they saw hundreds of soldiers coming.

Kellogg’s last dispatch to The Bismarck Tribune, written at the mouth of the Rosebud River four days before the infamous battle, ended on a dramatic note:

“We leave the Rosebud tomorrow and by the time this reaches you we will have met and fought the red devils, with what result remains to be seen. I go with Custer and will be at the death.”

Curly, a Crow scout for Custer, galloped up to the Far West, a steamboat that helped supply the Army’s campaign, waiting at anchor on the mouth of the Little Bighorn River.

The distraught scout spoke no English, and all the Army interpreters were out in the field, so Curly had to draw figures and pantomime to deliver his shocking message: Custer and all the men under his immediate command were wiped out.

The men aboard the Far West were in disbelief, but confirmation came soon enough. On June 30, 52 wounded soldiers and a horse named Commanche — the only cavalry survivor from Custer’s force — boarded the steamboat to be ferried to safety.

Grant Marsh, the boat’s veteran captain, who feared he’d run the Far West aground, managed to turn the steamboat around and, aided by the downstream current, swiftly reached the Yellowstone. The boat was decorated in black, its flag at half-mast, with black smoke belching from its twin stacks.

The Missouri River ran high, helping Marsh to make record speed on the 710-mile journey to Bismarck, pulling ashore at 11 p.m. on July 5, a 54-hour trip never again attained in the steamboat era.

Clement Lounsberry, Kellogg’s employer and editor of The Bismarck Tribune, was one of the first to be roused from bed with the news. Piecing together information from an Army report and accounts of surviving soldiers from companies Custer had split from his command, Lounsberry went to work in the telegraph office.

By early morning, a full list of killed and wounded soldiers was available. Lounsberry wrote a 15,000-word dispatch for the New York Herald, a newspaper for which he corresponded, and for an extra edition of The Bismarck Tribune, which claimed to publish the first account of the massacre in an extra edition published July 6, 1876 — 143 years ago today.

The Tribune headline blared, “Massacred: Gen. Custer and 261 men the victims. No officer or man of 5 companies left to tell the tale.”

Custer had been a national hero since his exploits in the Civil War, and news of his defeat shocked a nation that was in the midst of celebrating the Centennial Exhibition in Philadelphia.

A few days after the battle, soldiers surveying the battlefield found Kellogg’s body resting on a grassy slope. The body, lying on its back, had been scalped, with an ear cut off. The corpse was identified by soldiers who recognized a distinctive boot Kellogg wore.

Kellogg’s marker at the Little Bighorn is in an out-of-the-way location about 200 yards from the main battlefield monument, but historians believe he might have fallen elsewhere.

Years later, Lounsberry wrote mistakenly that Kellogg’s body had not been mutilated, perhaps in deference to his slain reporter’s family, or perhaps because he was misinformed. The Native Americans, he said, called his reporter “the man who makes the paper talk.”

The New York Evening Post published a tribute to Kellogg: “He was not a soldier, and had no soldier’s laurels to win; but his duty as a correspondent was to go with Custer, and he went in the pursuit of duty, not of honors.”

Some of Mark Kellogg’s personal belongings were sent to a Bismarck druggist, John Piatt Dunn, who kept a boarding house where the reporter had stayed.

Decades later, in 1983, the newspaper’s publisher presented Kellogg’s diary to the historical society, where it is part of the society’s collections, along with the satchel and some of Kellogg’s other belongings, including a lead pencil, rubber comb and tobacco pouch.

Sandy Barnard, a former journalist turned historian who extensively studied events surrounding the Battle of the Little Bighorn, wrote a biography of Kellogg in 1996, “I Go With Custer.”

Kellogg was an example of the frontier newspaper stringer who floated around, writing columns and articles for a variety of publications to scratch out a living, Barnard said. Some of his columns appeared under the pen name “Frontier.”

Before Barnard’s biography was published, Kellogg had been little more than a footnote to one of the most celebrated battles in American history. Inevitably, myths became part of the story.

Barnard debunked several myths about Kellogg, including the claim by Lounsberry that he planned to cover the Custer campaign, but was prevented from going by a family illness.

Casting doubt on that story was a train trip to the east Lounsberry made right after Custer left Fort Abraham Lincoln, he said. “If his wife was sick, he didn't stay home to take care of her.”

Another myth: The Associated Press claimed Kellogg as its first war correspondent to be killed in battle. That’s a misnomer, because Kellogg wrote for The Bismarck Tribune, St. Paul Pioneer-Press and New York Tribune, Barnard said.

Although The Associated Press distributed stories Kellogg wrote, he was employed by the newspapers, not the wire service, he said.

Kellogg was a sympathetic figure, in Barnard’s view. He never was a full-time employee for Lounsberry, he said, and struggled for years to earn a living. Unable to support his daughters, he sent them to live with their maternal aunt.

As a reporter, Kellogg had an “eye for detail” and “good observational skills,” Barnard said.

Outfitted in the field with a Spencer rifle, Kellogg was indistinguishable to the warriors from the soldiers he accompanied, said Barnard, who believes Kellogg died far from the center of the action.

“The tide of battle kind of washed over him,” he said. “He was left behind. He fell so far from where most of the troops had fallen. At Little Bighorn, Kellogg was less the reporter and much more the frontiersman. It was basically all hands on deck. Everybody had to use a gun or die.”

This article is based on information from Mark Kellogg's diary, Clement Lounsberry's "Early History of North Dakota," Joseph Mills Hanson's "The Conquest of the Missouri," a biography of Grant Marsh and Sandy Barnard's "I Go With Custer."

A 38-year-old Mandaree man has been sentenced to serve 40 years in prison for sexually abusing children under the age of 12.

A longtime weekly newspaper in one of North Dakota's oldest towns will close after printing its last edition this week.

Measurable snow in forecast for start of workweek

The start of the workweek will be marked by a return to winter.

A Williston man is accused of sending sexual messages and nude photos to a 12-year-old girl.

Bismarck woman sentenced to probation in death of infant son

BISMARCK, N.D. (AP) — A 20-year-old Bismarck woman charged with felony child neglect following the death of her baby has been sentenced to two…

Mark Kellogg, a reporter for the Bismarck Tribune and New York Herald, was killed while covering the Battle of the Little Bighorn on June 25, 1876.

This marker at the Little Bighorn Battlefield shows where Mark Kellogg, a correspondent for the Bismarck Tribune and New York Herald, purportedly fell in the 1876 battle where Lakota, Cheyenne and Arapaho warriors defeated George Custer's 7th Cavalry.

Personal belongings of Mark Kellogg, a reporter killed at the 1876 Battle of the Little Bighorn, in the collections of the State Historical Society of North Dakota.

The State Historical Society of North Dakota has the diary kept by reporter Mark Kellogg, who accompanied George Custer's 7th Cavalry and was killed at Little Bighorn. Forensic testing concluded the stains on the notes, on loose paper, are not bloodstains.

This reproduction of the July 6, 1876, issue of the Bismarck Tribune reports the Custer massacre.