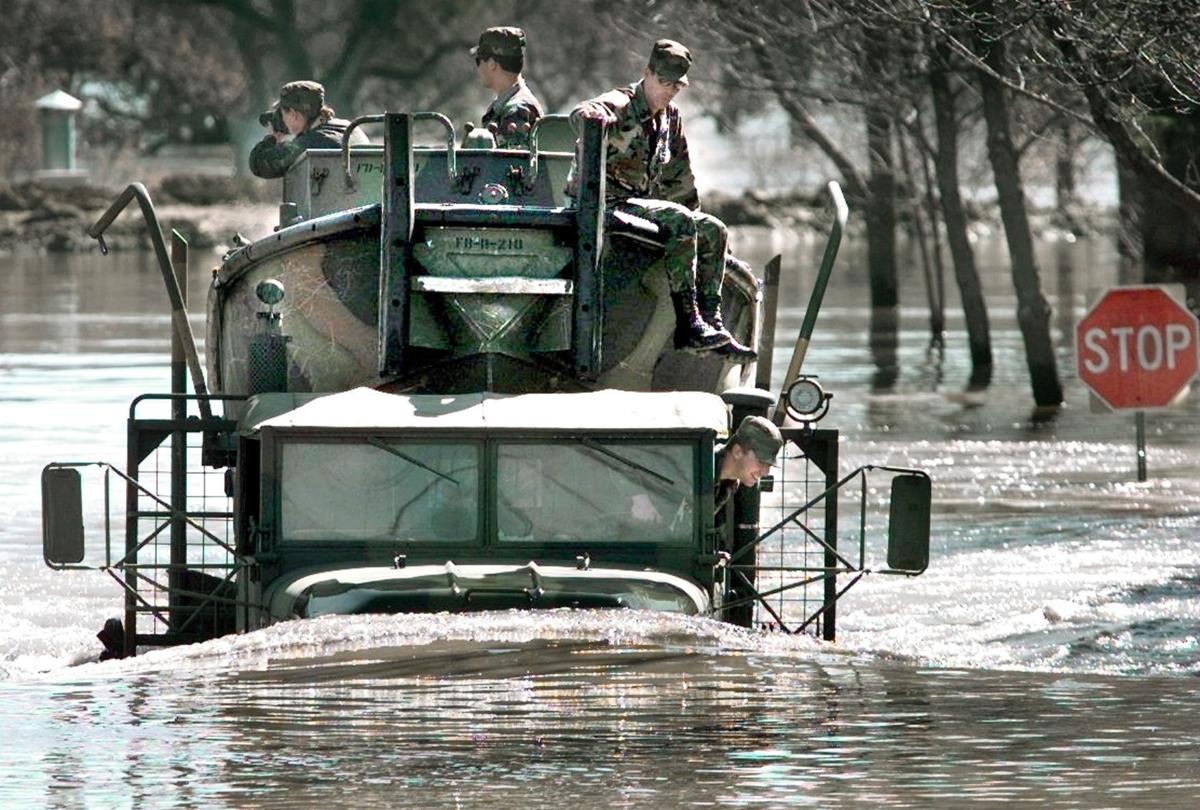 Pfc. Jason Schmidt of the North Dakota National Guard watches his wake as he drives a 5-ton truck through a flooded 15th Ave. S. in Grand Forks on April 25, 1997. 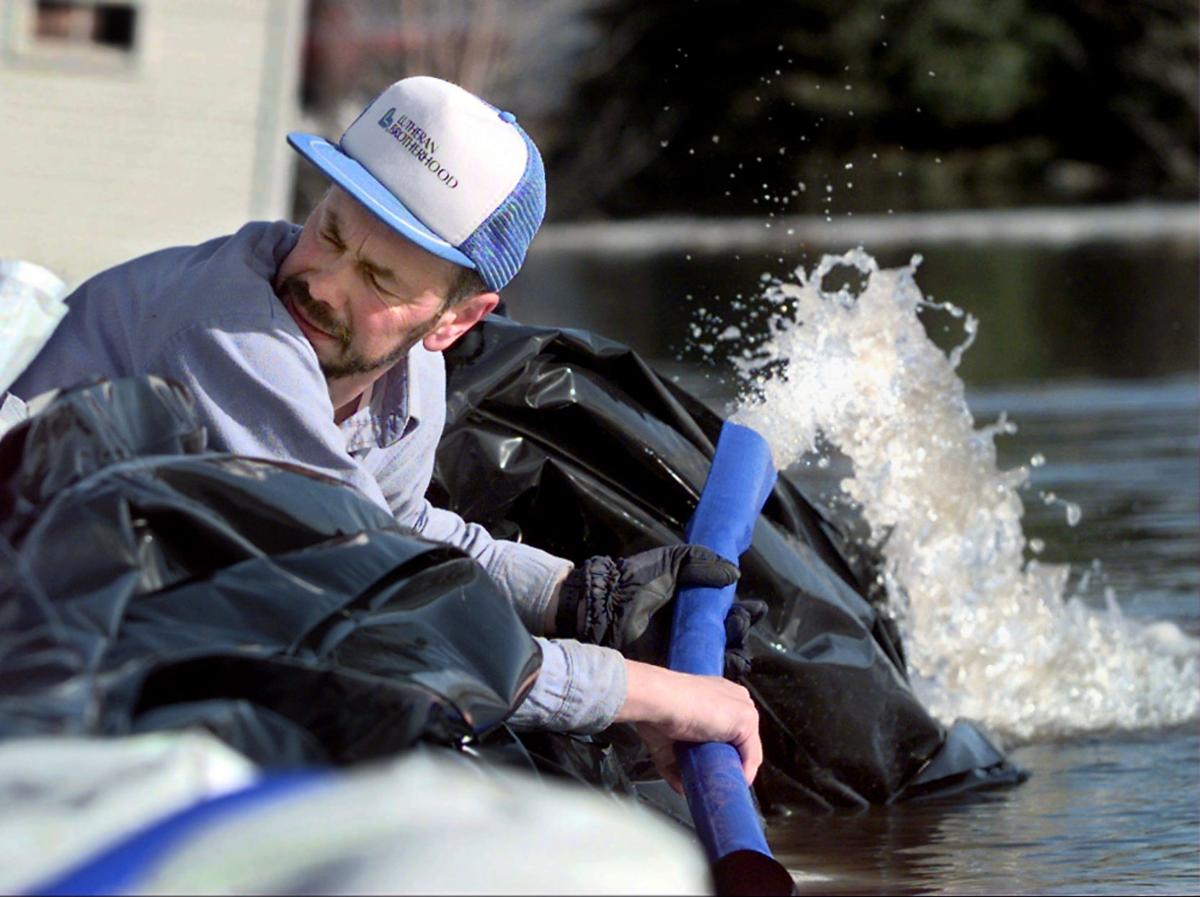 John Fick turns his head from the spray of a sump pump that is draining the area behind the dike of his Lake Drive home in April, 1997. photo by Chuck Kimmerle 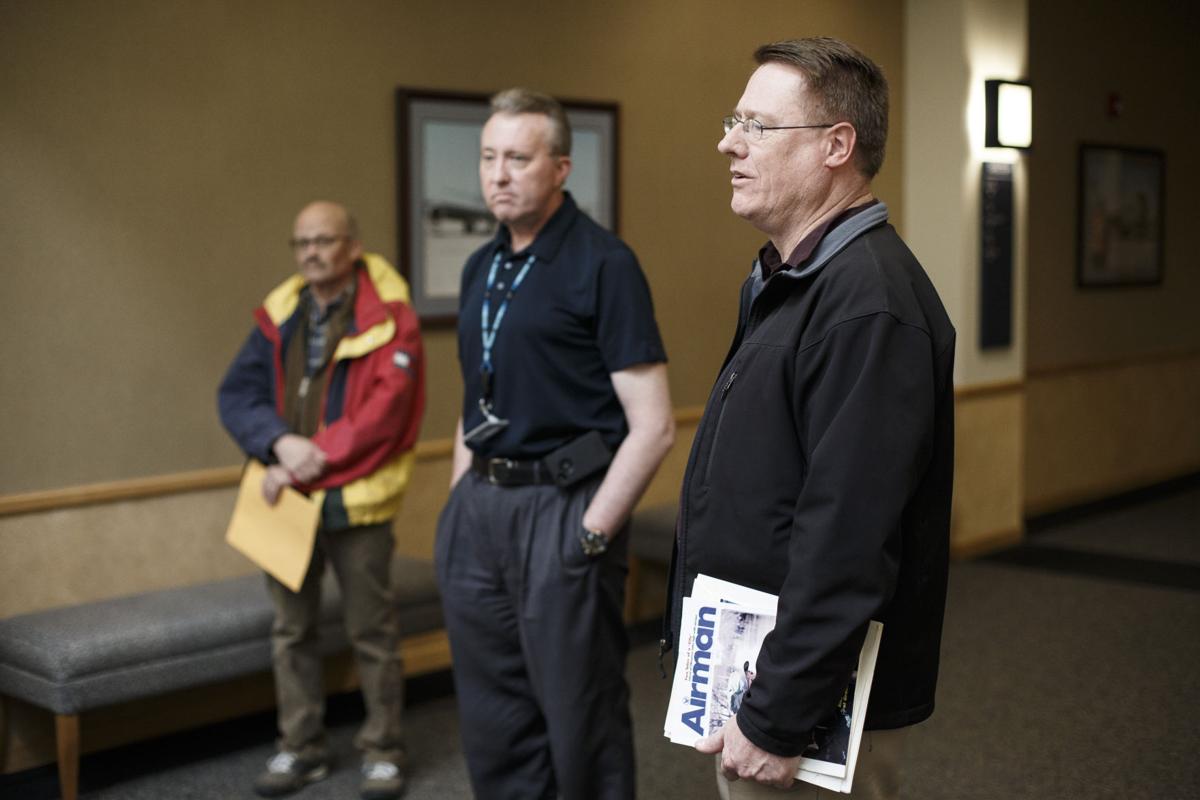 John Welch, Eddy Haskell and Graham Prichett recall their time at the base during the time of the flood. 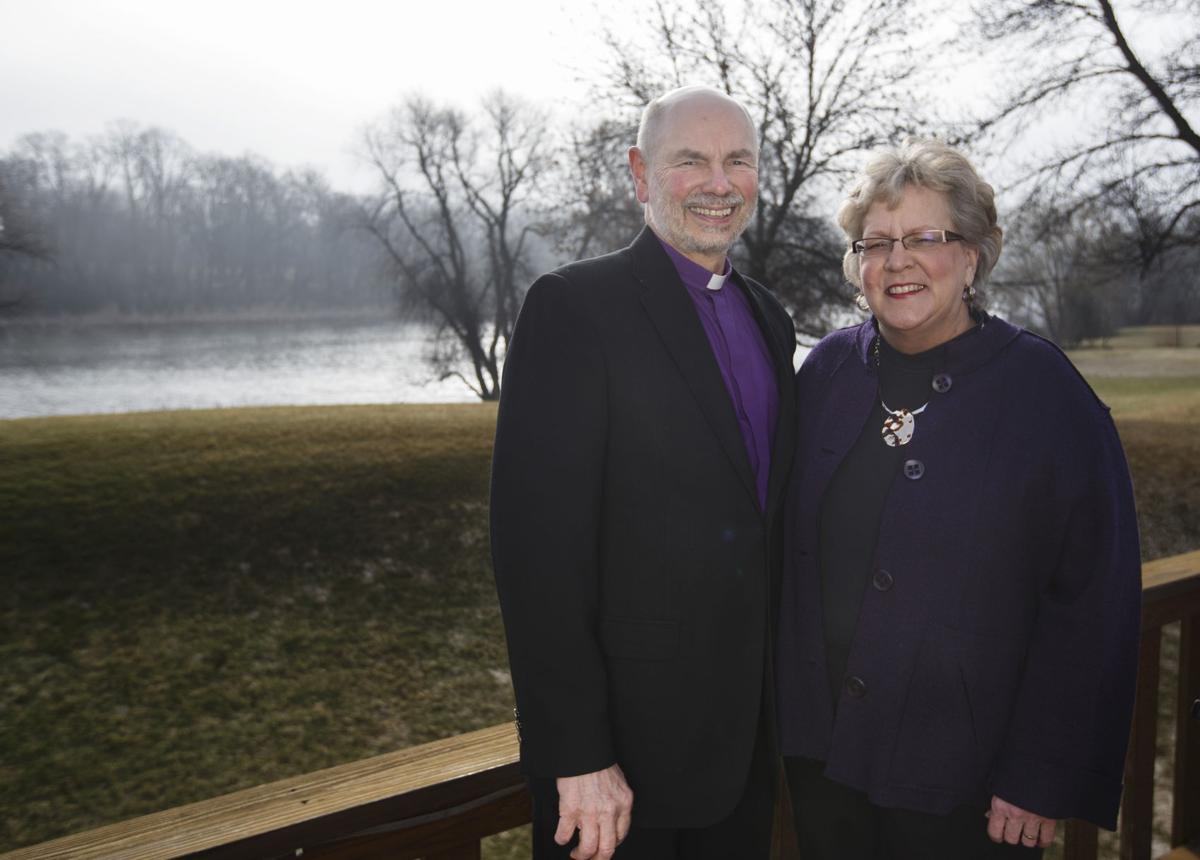 John and Kathy Fick stand on their deck over-looking the dike that now runs through their backyard protecting their home from the coulee. (Jesse Trelstad/Grand Forks Herald) 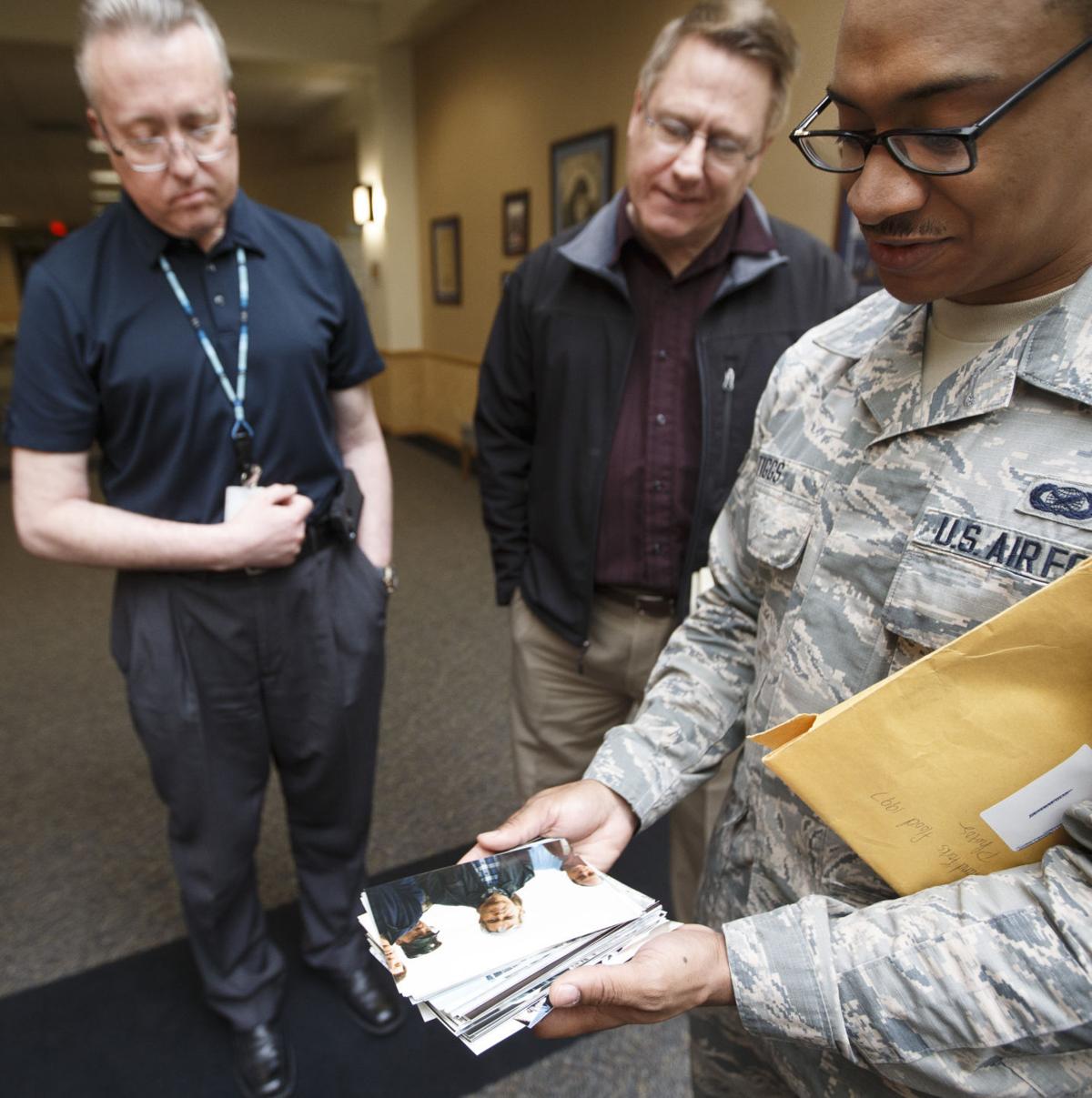 “All residents must evacuate!”

It was April 19, 1997, and the residents of the Burke Addition south of Grand Forks had spent weeks sandbagging in hopes of saving their neighborhood.

But as the Red River flowed over the dikes, the Ficks and others realized they couldn’t stop it.

“The water just got to be too much and it came both over and under the dikes,” Kathy said. “It just came through and started to fill the lower level of the house.”

At that point, water had surrounded the homes in the Burke Addition, and they had to escape by boat. Kathy recalled a friend with a farm south of Grand Forks coming to their front door with a fishing boat to safety.

The Ficks were among the more than 50,000 residents who had to leave their homes as the Red devastated the Grand Forks area. But once those people left, they had to answer a new question: Where do we go?

It’s hard to know to where everyone affected by the flood fled, though there were spots set up for refugees.

One of the most notable was Grand Forks Air Force Base about 15 miles west of the city.

Air Force staff had prepared about 3,000 beds in three hangars, but it’s likely more refugees sought shelter there, said Bryan Booker, a wing historian for the base.

Initially, intake was chaotic, said Eddy Haskell, who at the time was a technical sergeant for the base. But he noted everyone handled their orders well.

“There’s method behind the madness,” he said, adding it was a good way to test wartime strategies and plans.

People flocked to other communities in North Dakota and Minnesota big and small, including Crookston, Devils Lake, and Bemidji. Some even scattered across the country.

In the first days, more than 2,500 registered at the recently built Crookston high school, though officials believe that number to be low. One report said as many as 1,500 people didn’t register with the Crookston Emergency Operations Center in the first days of evacuation, and the number of evacuees to Crookston likely exceeded 4,000, according to Herald archives.

Retired firefighter Bruce Parr said a refugee center was the school’s first use — it hadn’t even been open to students for class yet. Then the flood refugees were spread across to other parts of the community — school buildings, churches, University of Minnesota-Crookston and the homes of residents willing to open their doors to strangers.

‘Taking care of my own people’

The reason Crookston handled the intake so well was likely because everything was set up in anticipation of Crookston flooding, Parr said. The city had battled the Red Lake River, but the dikes held back the flood waters for the most part.

“We had a plan for ourselves, and we ended up using it for the people of East Grand Forks,” he said.

Still, he said it was mind-blowing to watch people come into Crookston, Parr said. He recalled going to East Grand Forks to see what the Grand Cities went through.

“It was really tough to see, the devastation,” he said.

Parr and Haskell noted the gratitude from refugees, but both said they didn’t need the thanks because “we were just doing our job.”

“All of the sudden, they had a place to stay,” Haskell said. “They had food. They had shelter. They had order. They had something they could grab onto.”

Some who fled to other communities had to finish school while the cities rebuilt. Devils Lake Superintendent Scott Privratsky, who worked in the district business office at the time, said the school handled the increase in the student population.

“I think there were a lot of friendships made and retained for years after,” he said. “I think the kids were very grateful that they were able to come and pick up the same type of classes they had.”

Haskell also noted how everyone came together to help each other instead of fighting or looting. He and Booker said there was a silver lining: The flood gave the base an opportunity to help their community.

“I’m finally taking care of my own people,” Haskell said.

Balance of grief and thanks

John Welch, a medical administrator for the Air Force Base, recalled how he himself was a refugee from Grand Forks. He remembers packing up his family to Fertile, Minn. Because he would have to travel almost two hours to work, the base gave him administrative leave for a week.

He also helped residents in the aftermath of the flood, cleaning out basements. He recalled the Salvation Army handing out hot lunches and coffee.

“Their neighborhood was without running water or electricity, thus their house was cold and they could not cook or make coffee,” he said, adding it was odd how something as simple as a meal could lift their spirits.

Like their neighbors, the Ficks were able to seek shelter at a farm near Thompson, about 10 miles south of Grand Forks.

Though they knew they had to leave their homes behind, the Ficks said there was always a sense of joy, and even an element of fun, as they settled in as flood refugees.

“Even though we were dealing with grief and loss, there was such a spirit and sense of community,” Kathy said. “It was like those emotions came head to head over and over again.”

Kathy said it was a balance of grief and thanks, adding no one in her group injured themselves.

They eventually returned home and would build a dirt dike along the coulee in their backyard.

Haskell said he found a new respect for floods. Other events like earthquakes can be powerful, but it takes months sometimes to recover from a flood as devastating as the one from 1997.

After living in the neighborhood for 25 years, the Ficks said they love living in the peaceful Burke Addition. They never imagined the coulee could become their enemy, especially with how gently it flows behind their dike.

“We’ve become friends again with the coulee,” she said with a smile.

Biden: 'Prepared to compromise' on infrastructure

Biden: 'Prepared to compromise' on infrastructure

Pfc. Jason Schmidt of the North Dakota National Guard watches his wake as he drives a 5-ton truck through a flooded 15th Ave. S. in Grand Forks on April 25, 1997.

John Fick turns his head from the spray of a sump pump that is draining the area behind the dike of his Lake Drive home in April, 1997. photo by Chuck Kimmerle

John Welch, Eddy Haskell and Graham Prichett recall their time at the base during the time of the flood.

John and Kathy Fick stand on their deck over-looking the dike that now runs through their backyard protecting their home from the coulee. (Jesse Trelstad/Grand Forks Herald)