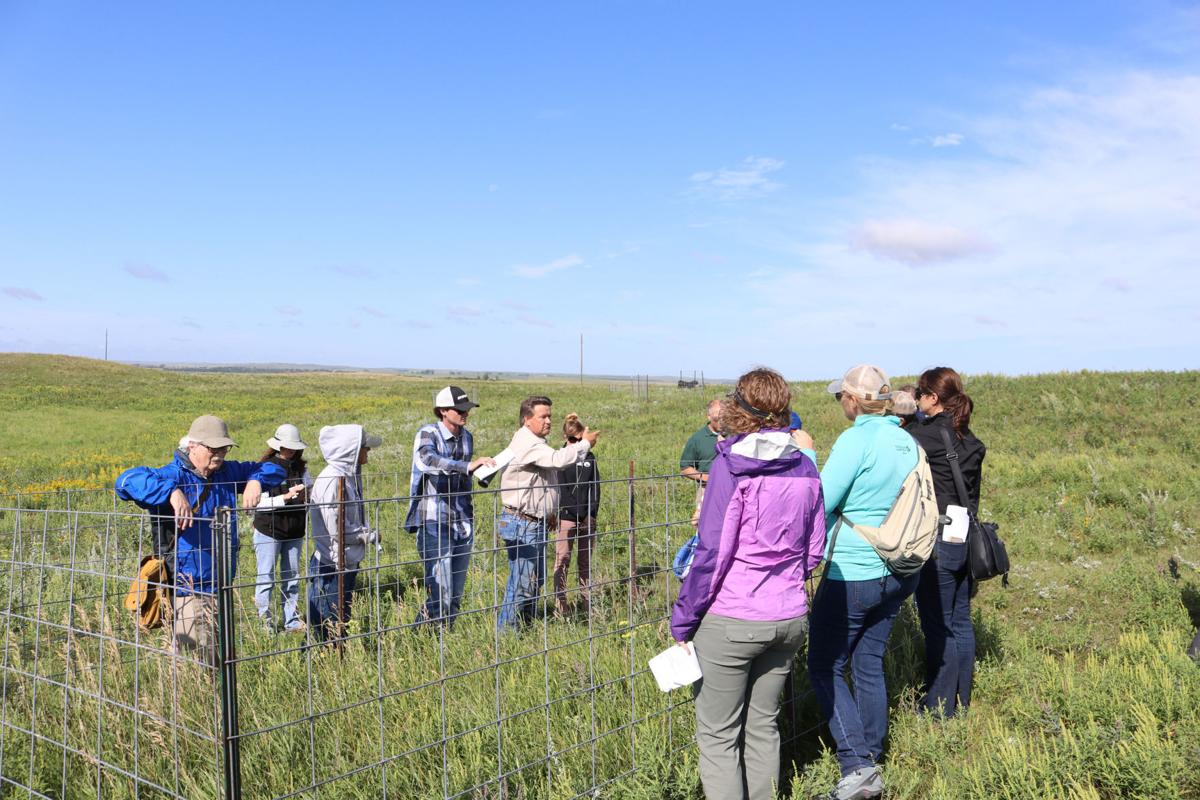 Kevin Sedivec, in tan, is director of the Central Grasslands Research Extension Center near Streeter. Here, he shows how different intervals of cattle grazing affected grasslands. 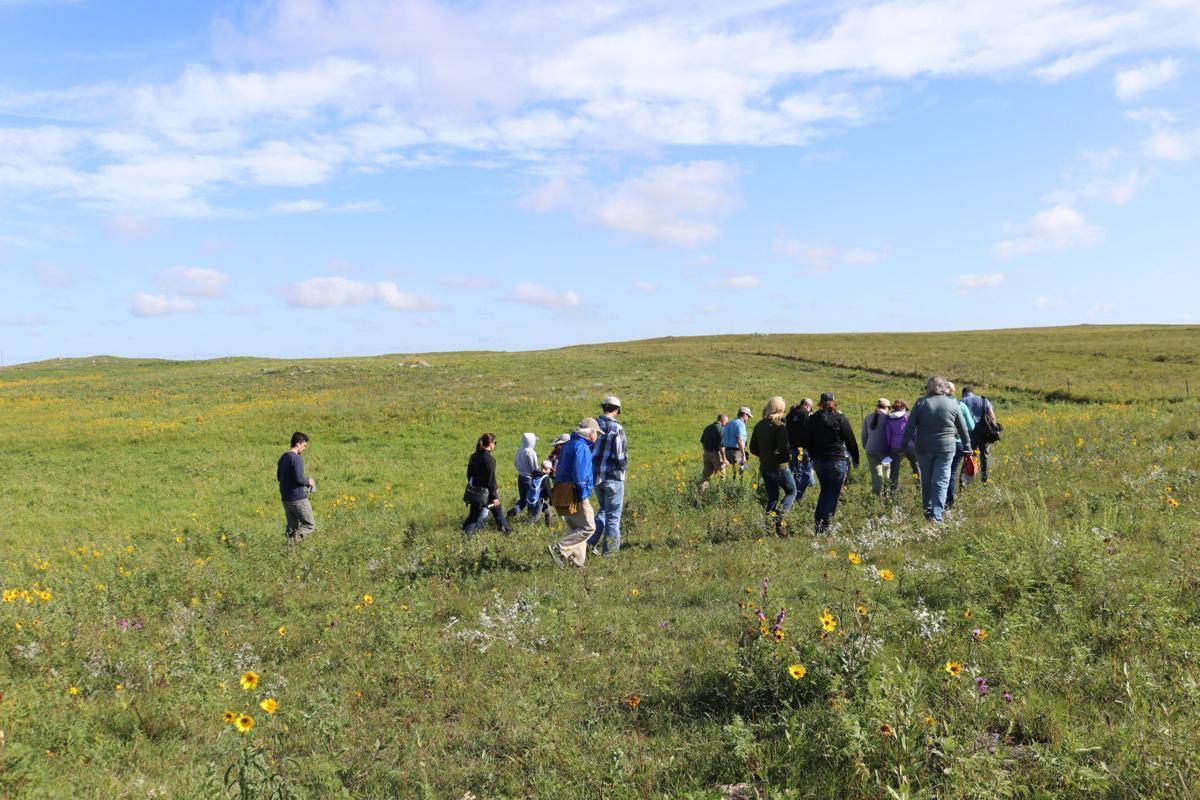 Visitors to Central Grasslands Research Extension Center were impressed with the species diversity on grasslands that had been burned a year prior as part of a research project. The group was touring pastures as part of the America's Grasslands Conference. 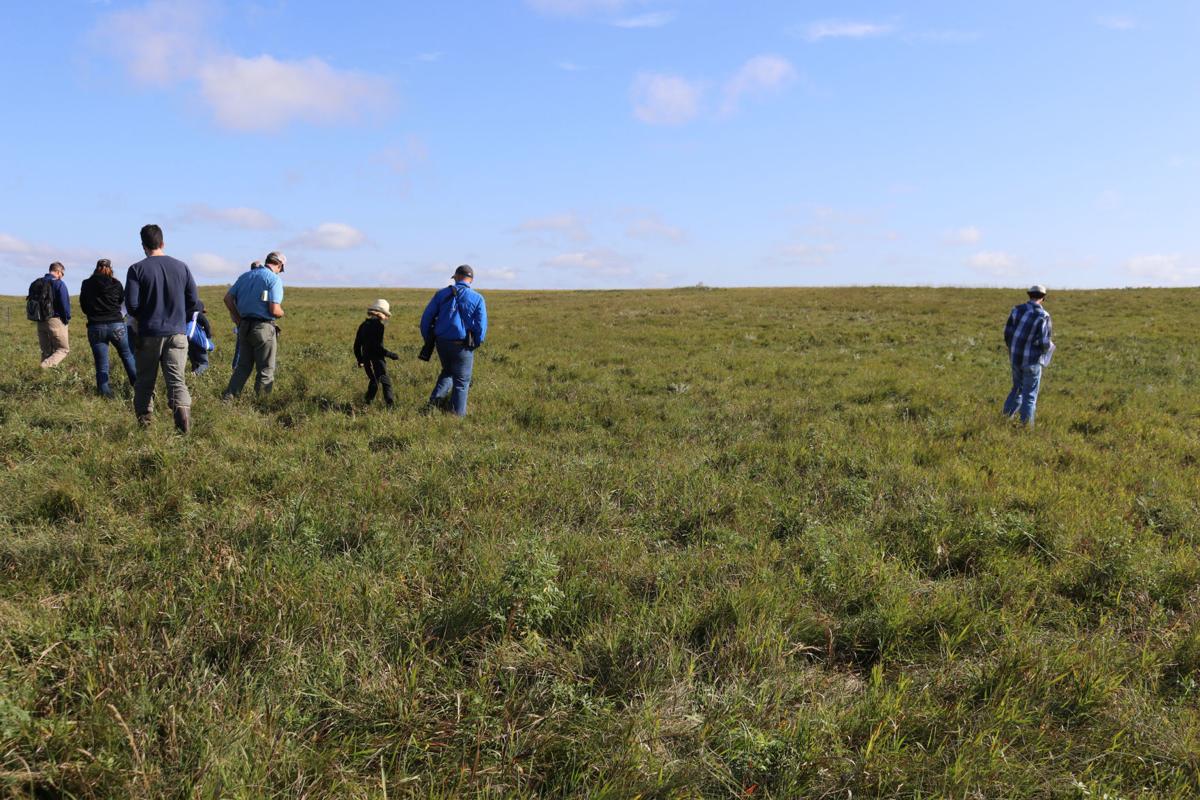 STREETER — Cattle and conservation haven’t always been natural companions when it comes to how to manage grasslands. Many conservation programs have sought to keep cattle off the land, the thought being that cattle would damage the ecosystem of pollinators and birds and other species that rely on the grasslands. But the philosophy of how to best care for grasslands and the flora and fauna that call them home is changing.

“Cattle have historically gotten a bad rap on being bad for the environment, bad for our grasslands. And in the end, they were so wrong,” said Kevin Sedivec, director of the Central Grasslands Research Extension Center in Streeter. “We finally understand the value of cattle in terms of conservation and keeping grass where grass should be ... in terms of the whole ecosystem function.”

The National Wildlife Federation held the biennial America’s Grasslands Conference Aug. 20-22 in Bismarck, and part of the focus was on the interplay between grazing and grassland health.

“We’re here to try to build partnerships with landowners, with ranchers who really are the true heroes in this because they’re the ones that are maintaining these grasslands, conservation groups, state agencies, federal agencies, really talking about restoring this world-class resource,” said Collin O’Mara, president and CEO of the federation.

Profitable ranches are important in keeping grasslands from being plowed under or otherwise degraded, O’Mara said.

“If we didn’t have profitable ranching operations, we would have lost even more grasslands across the country,” he said. “And I think some of our greatest grassland conservationists are our ranchers.”

At the Central Grasslands Research Extension Center, scientists are studying the effects of disturbance on grasslands. On Aug. 20, a couple dozen grasslands enthusiasts from across North America stomped through pastures, looking at the difference between a pasture that had been burned last season and one that had not. The tour at the research center was one of several that day across North Dakota exploring grasslands management on working ranches, public lands and more.

On the pasture that had not been burned, the grass, mainly non-native brome grass, was plentiful, but species diversity was not. Across the fence, in the previously burned pasture, the tour participants were excited to find sunflowers, purple prairie clover, purple coneflowers, a variety of forbs and any number of other flora species.

Sedivec and other researchers pointed out various points on the landscape — the various species of plants and the purpose they serve, the bare areas where cattle had grazed more heavily, the wetlands and the weeds. They also explained how the different management decisions had affected the rate of gain of cattle; early results have shown cattle gaining better on the previously burned pastures that offered more diversity.

The tour also looked at areas where researchers had used cattle, rather than fire, as a form of disturbance on the land, grazing at a heavy stocking rate last year with a rest this year. Like the area that had been burned the year prior, the area where cattle had been used featured more species diversity, leading to more pollinator species and bird species on the land.

Research also looked at how grazing impacts the ecosystem. Peck said the results show cattle can be valuable tools on the landscape. For instance, some birds that use the grasslands as habitat prefer short grass and others prefer long grass.

“So we use cattle on that landscape to achieve these different habitat outcomes,” she said.

Sedivec explained that the projects he and other NDSU scientists are working on are focused on scientifically determining “good, sound management on our grasslands,” so that policies related to land management, endangered species and more can be based on science rather than anecdotes or emotions.

Grasslands, Sedivec said, cover about a third of the U.S. and half of the world. The importance of properly managing the resource, building soil health and incorporating cattle on the landscape has begun to make it into discussions and debates far beyond the world of agriculture.

“It is good to see that there’s been a lot of publicity, and I think it’s been well-deserved publicity, on the value of our soils and our grasslands,” Sedivec said. “They feed the world. They really create our carbon sinks. They protect our soils, they protect our waters.”

At Streeter, the research focuses on ways to profitably raise cattle while keeping the grasslands healthy for all of its other responsibilities.

“When managed properly, cattle are a really good thing in terms of producing really good grasslands. Plus the recycling aspect of it — the biology that that back end of a cow gives you is very beneficial to our grasslands as well as our environment,” Sedivec said.

The profitability of ranchers goes hand in hand with conservation, O’Mara said.

“At the end of the day, if we don’t have a sustainable habitat that’s also profitable, there’s a lot of places that we’ll lose. So having cattle that’s responsibly managed can not only provide a great product for market but can also provide this amazing resource that it needs to thrive,” he said.

Kevin Sedivec, in tan, is director of the Central Grasslands Research Extension Center near Streeter. Here, he shows how different intervals of cattle grazing affected grasslands.

Visitors to Central Grasslands Research Extension Center were impressed with the species diversity on grasslands that had been burned a year prior as part of a research project. The group was touring pastures as part of the America's Grasslands Conference.