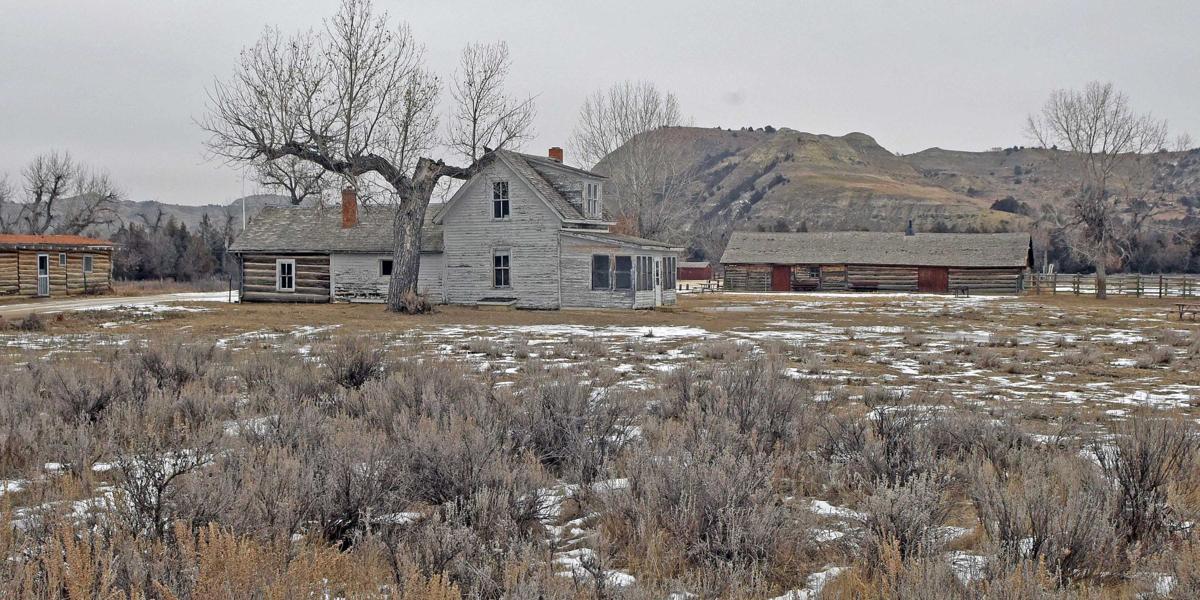 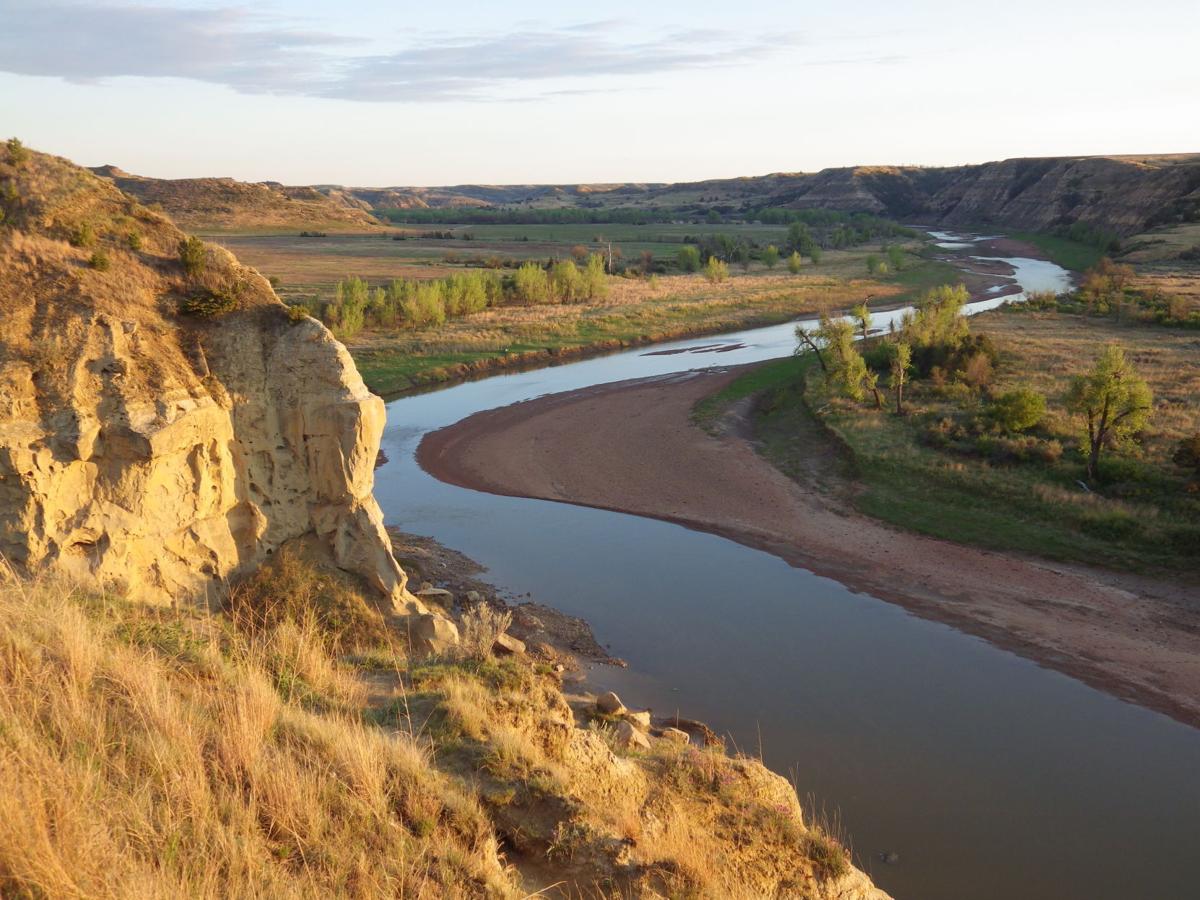 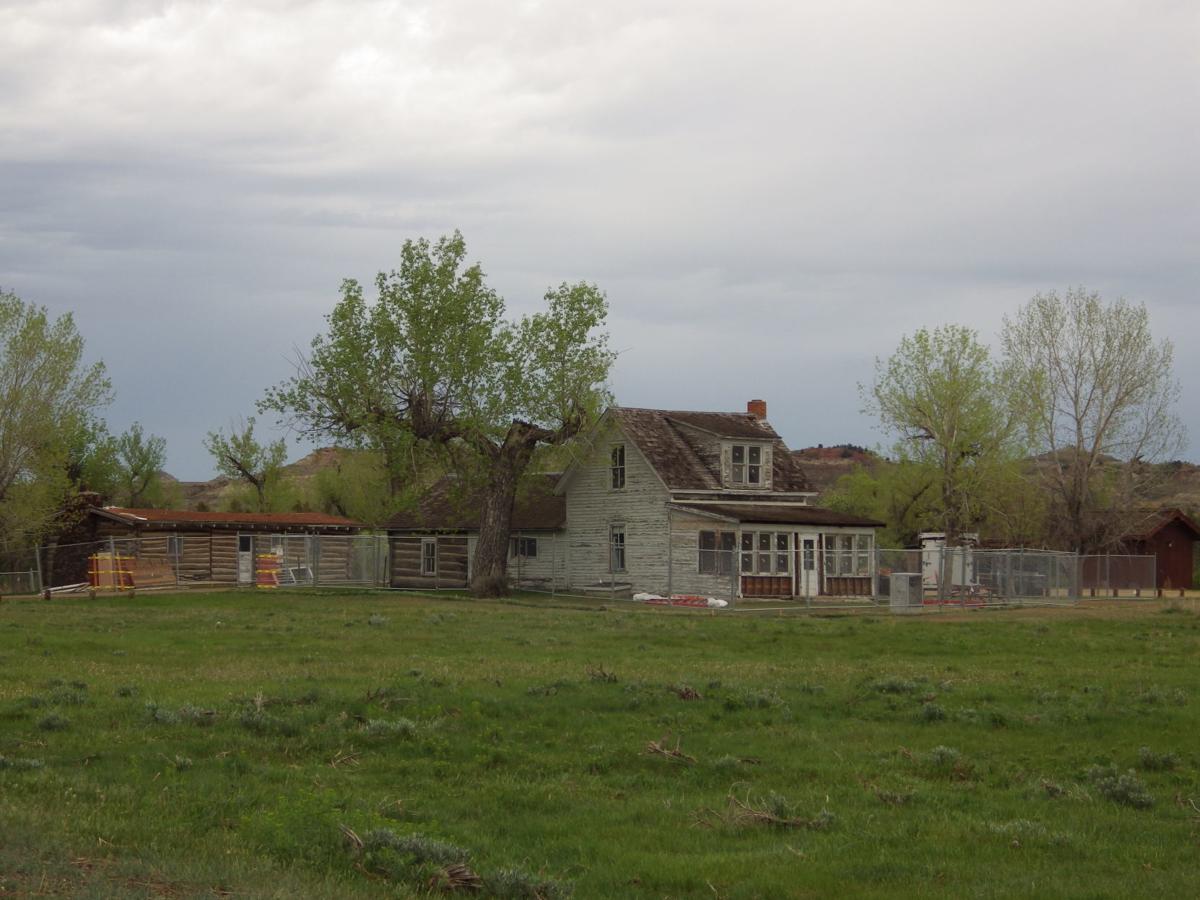 Peaceful Valley Ranch in Theodore Roosevelt National Park's South Unit dates to the 1880s. The ranch was park headquarters from 1947 to 1959. A $5.5 million rehabilitation and stabilization project is underway at the historic dude ranch. 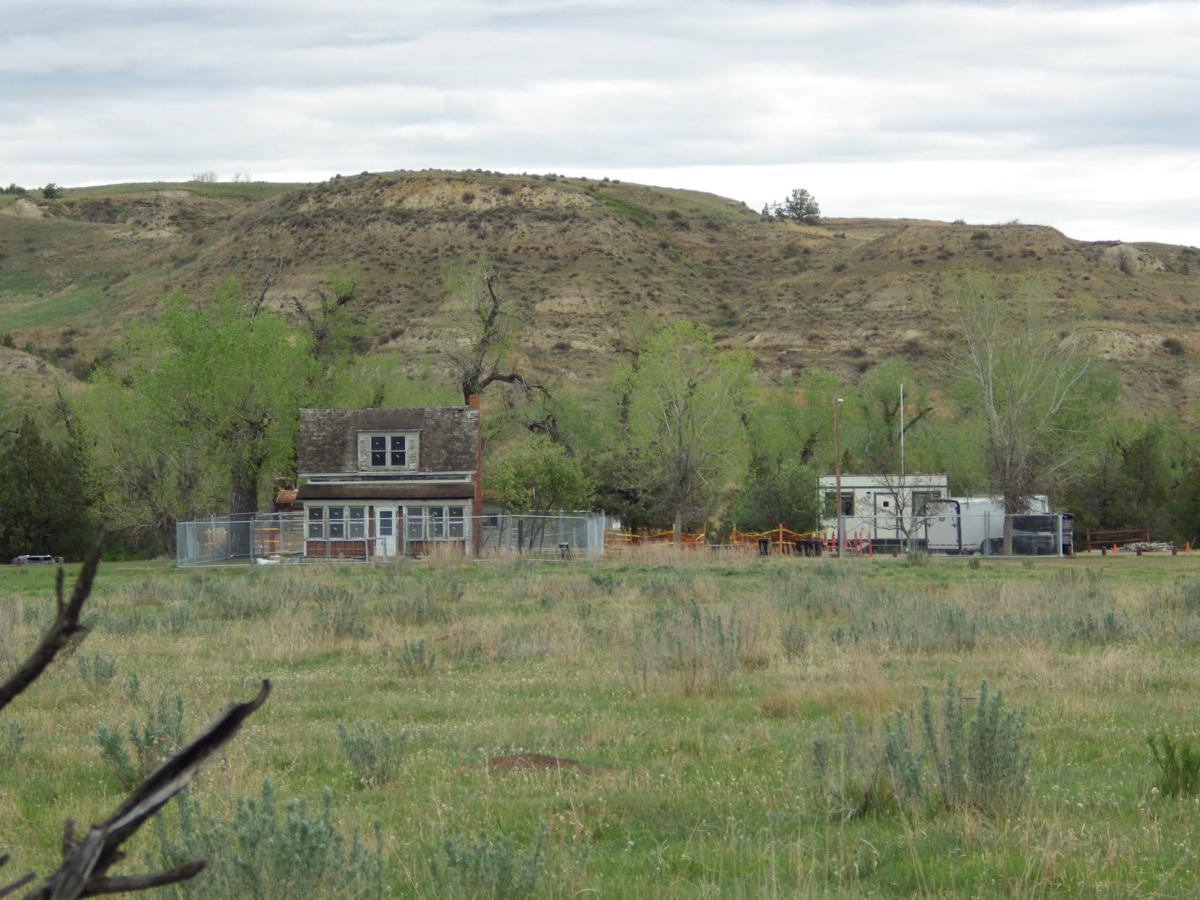 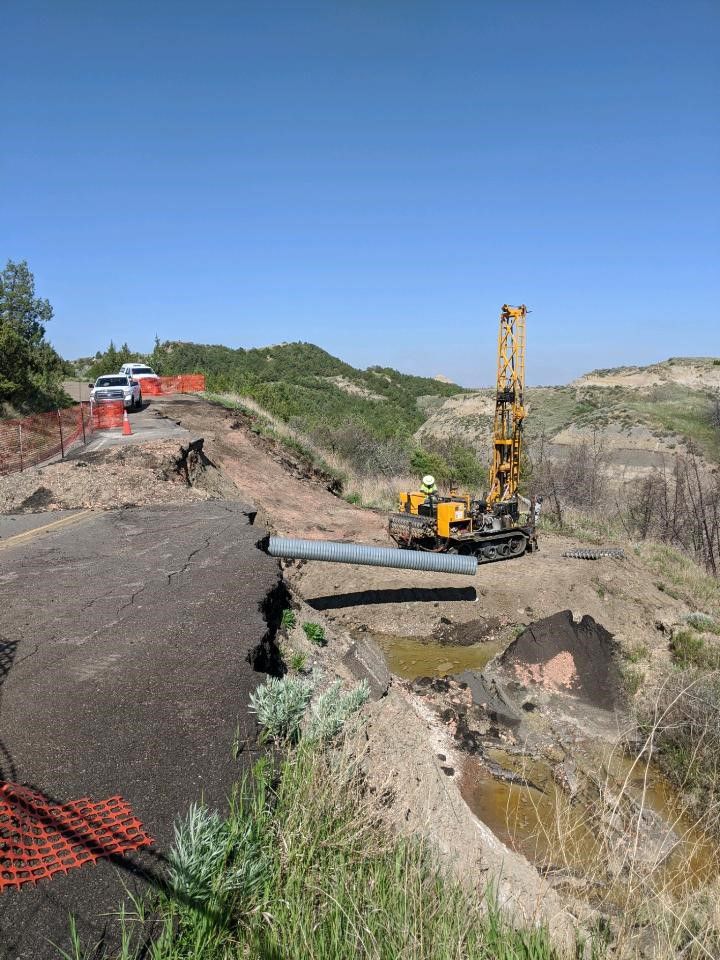 Crews drill for soil bore samples to assess the stability of layers under the surface of the road at the site of a 2019 slump in Theodore Roosevelt National Park's South Unit. 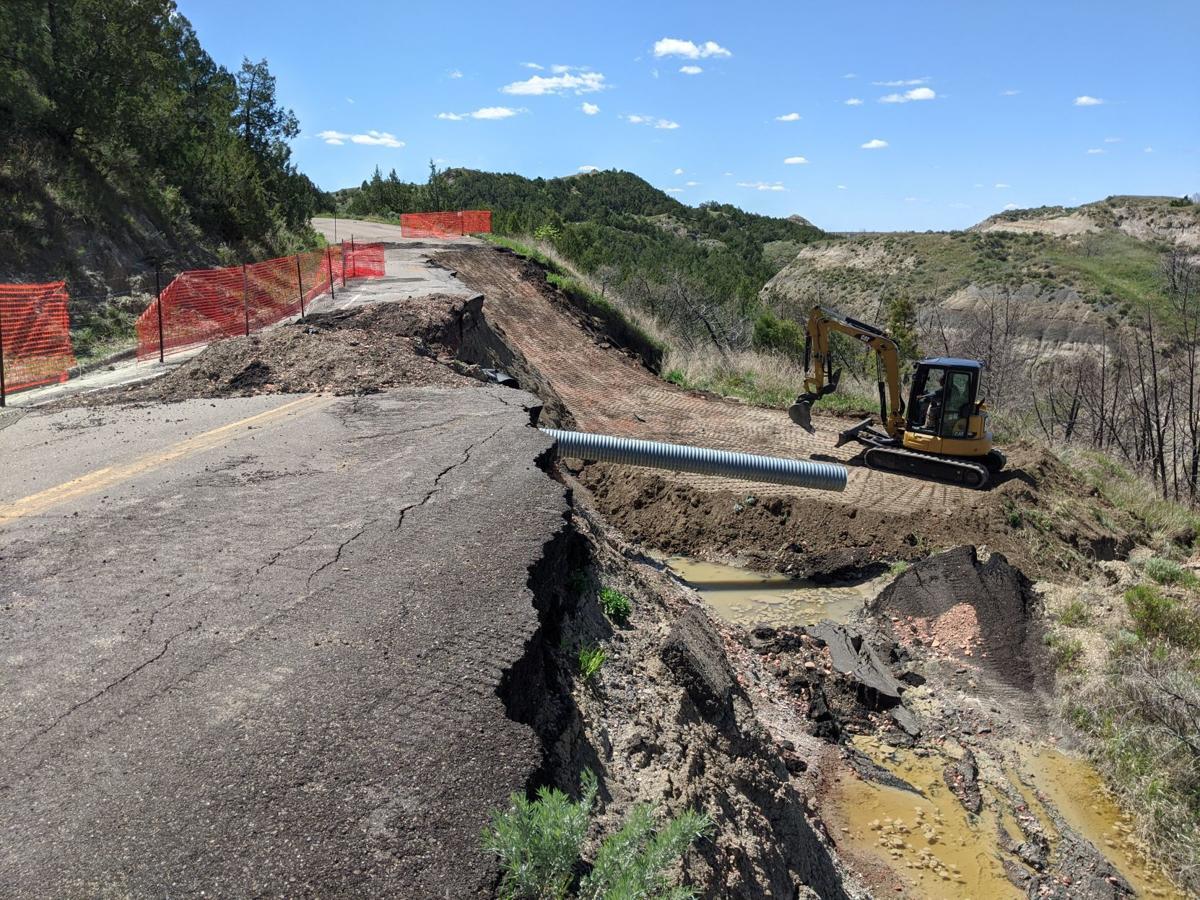 This section of roadway on Theodore Roosevelt National Park's South Unit scenic drive slumped in May 2019 due to erosion. Engineers' assessments are underway to determine repairs. 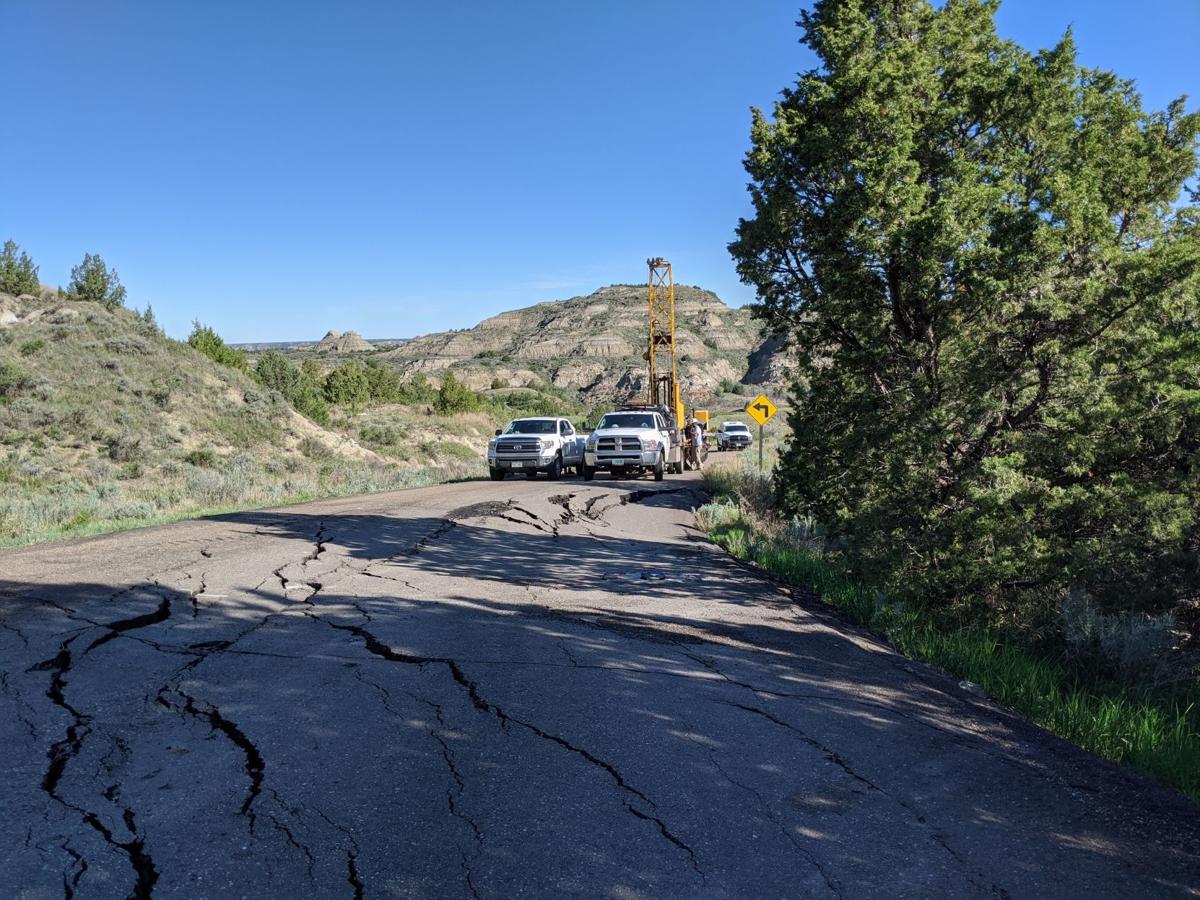 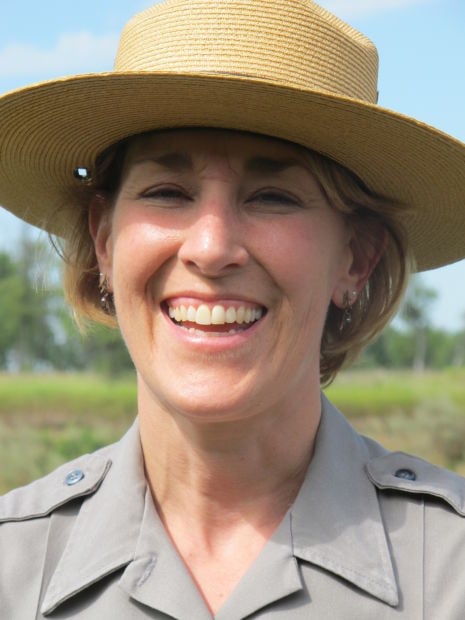 When Bob Tescher closes his eyes, he's sitting on a butte overlooking the Little Missouri River in the Badlands.

"Everyone's got their little place that they go to," he said.

His parents, Alvin and Betty Tescher, ran a guided horseback trail riding concession from 1967-82 out of Peaceful Valley Ranch in Theodore Roosevelt National Park's South Unit near Medora. Tescher remembers waking up on the porch to a bison nibbling a flowerbed, the smell of his parents' popular chuckwagon breakfasts, and horses being broken on a river sandbar.

"For me the most amazing thing, I guess, was how much space we had available to us," said Tescher, one of 11 siblings.

Millions of dollars in new projects funded by park and National Park Service recreation fees are underway at the park, including a $5.5 million rehabilitation and stabilization project at the historic ranch site.

The former dude ranch dates to the 1880s, when a young Theodore Roosevelt ranched and hunted in the area. Among its many uses, the ranch also was park headquarters from 1947-59.

'Truthful to the historic fabric'

Workers are scraping lead paint, repainting, and removing soil around the white ranch house, restoring the log bunkhouse to a one-room configuration, and removing and repouring the barn's cement floor. All of the buildings will have new roofs and will be accessible to people with disabilities. The barn's exterior logs will be replaced with cottonwood logs.

"We're trying to be very truthful to the historic fabric of that building and that campus," Park Superintendent Wendy Ross said.

Planning for the project began in 2015 and "took quite a bit of time," she added. Work began this spring and is expected to go into early summer 2021. Park officials haven't yet designated a specific purpose for the ranch, from which guided horseback rides were based until 2014. Ross expects some interpretive activities at the ranch in the future.

"For me, the ranch house and the buildings there really evoke that ranching lifestyle, the strenuous lifestyle that Theodore Roosevelt really wanted to embrace in the Badlands of North Dakota," she said.

Interpretive programs at the ranch could become "a world attraction if done right," according to Wally Owen, who for 20 years ran the horseback riding outfit from the ranch. He'd prefer to see a private concessionaire due to budget issues.

"It deserves a high quality of interpretation because it's the last existing, that I know of, open-range ranch," Owen said.

Tescher hopes the ranch can again one day host trail rides, which he said gave a new perspective for seeing the park and its wildlife.

"I think that opened up the whole world," he said. "It gave the people of the park, the visitors something to do and something to see."

Ross sees the restored ranch fitting nicely with the planned Theodore Roosevelt Presidential Library. The 2019 Legislature authorized a $50 million operations endowment for the library, available when $100 million is raised privately to build the facility. The library's board of trustees is working to acquire 60 acres of U.S. Forest Service land near the Burning Hills Amphitheater by Medora.

The National Park Service and the board last year signed an agreement for shared goals.

"It just makes sense to me that we would really take advantage of that partnership and the opportunity to provide a greater visitor experience for the people that come to western North Dakota," Ross said.

Library CEO Ed O'Keefe said the projects will enhance visitors' experience to the Badlands and also offer an opportunity to "master plan."

"You can look at how each of these elements speak to one another and how they interconnect," he said.

Three architecture firms are competing to design the library. Design teams will visit the Medora area this week to see the preferred site and the park, and to meet with local and state officials and board trustees.

New restrooms are planned in the South Unit's Cottonwood Campground and the North Unit's Juniper Campground, comprising a $1 million project. Prefabricated facilities are being built in South Dakota. The old facilities were demolished. Lack of wheelchair accessibility and visitor capacity were factors in their replacement.

The project's completion has been delayed by the coronavirus pandemic, Ross said. The new restrooms -- two facilities in each campground -- should be in place by early or mid-July.

The park's campgrounds have been closed while awaiting the new facilities, but short staffing and federal pandemic guidelines also contributed to the closure. Visitor centers also are closed.

Last year, a 6-mile length of road on the South Unit's scenic drive was closed due to a slumped section of roadway rendered by erosion. Crews last weekend finished soil stability assessments that will help design repairs.

Other road failures have since popped up, including several large sinkholes and road movement near the Ridgeline Nature Trail and Scoria Point Overlook, west of the 2019 slump. The roadway from the park's old east entrance to the scenic drive's loop junction is the oldest piece of pavement in the park, Ross said.

"This section ... needs to be totally rebuilt and erosion control structures engineered, and that's what they're doing right now," she said.

Park officials also are planning rehabilitation of several trails, and repaving and regraveling of other sites in the future.

The park also has started a planning process to redesign the South and North Units' entrances and upgrade buildings to complement the library, streamline traffic and increase parking, Ross said.

A time frame is being established for the entrances' redesign. The process will seek public input from residents in Medora and Watford City and will parallel the library's development, according to Ross.

"It's very exciting, actually," she said. "It's very rare that a superintendent gets a chance to look at all of the development at an entrance and try to design it with an idea of partnership and leveraging of resources in mind."

Despite the pandemic, visitation to the park has been "right on par with where we normally are this time of year," Ross said. The park is North Dakota's No. 1 tourist attraction. It drew 691,000 visitors in 2019.

The National Park Service is waiving entry fees at its sites Tuesday in honor of the agency's anniversary.

This year's harvest at Knife River Indian Villages National Historic Site includes corn, squash, tobacco and sunflowers, much of which will be shared with tribes in North Dakota.

Theodore Roosevelt National Park campgrounds to open for winter/primitive use

Campgrounds in Theodore Roosevelt National Park will open Friday for winter and primitive campsite use.

Renovations to the ranch house, bunkhouse and barn of the Peaceful Valley Ranch are complete. Theodore Roosevelt National Park officials are eyeing educational programs for the site.

Peaceful Valley Ranch in Theodore Roosevelt National Park's South Unit dates to the 1880s. The ranch was park headquarters from 1947 to 1959. A $5.5 million rehabilitation and stabilization project is underway at the historic dude ranch.

Crews drill for soil bore samples to assess the stability of layers under the surface of the road at the site of a 2019 slump in Theodore Roosevelt National Park's South Unit.

This section of roadway on Theodore Roosevelt National Park's South Unit scenic drive slumped in May 2019 due to erosion. Engineers' assessments are underway to determine repairs.