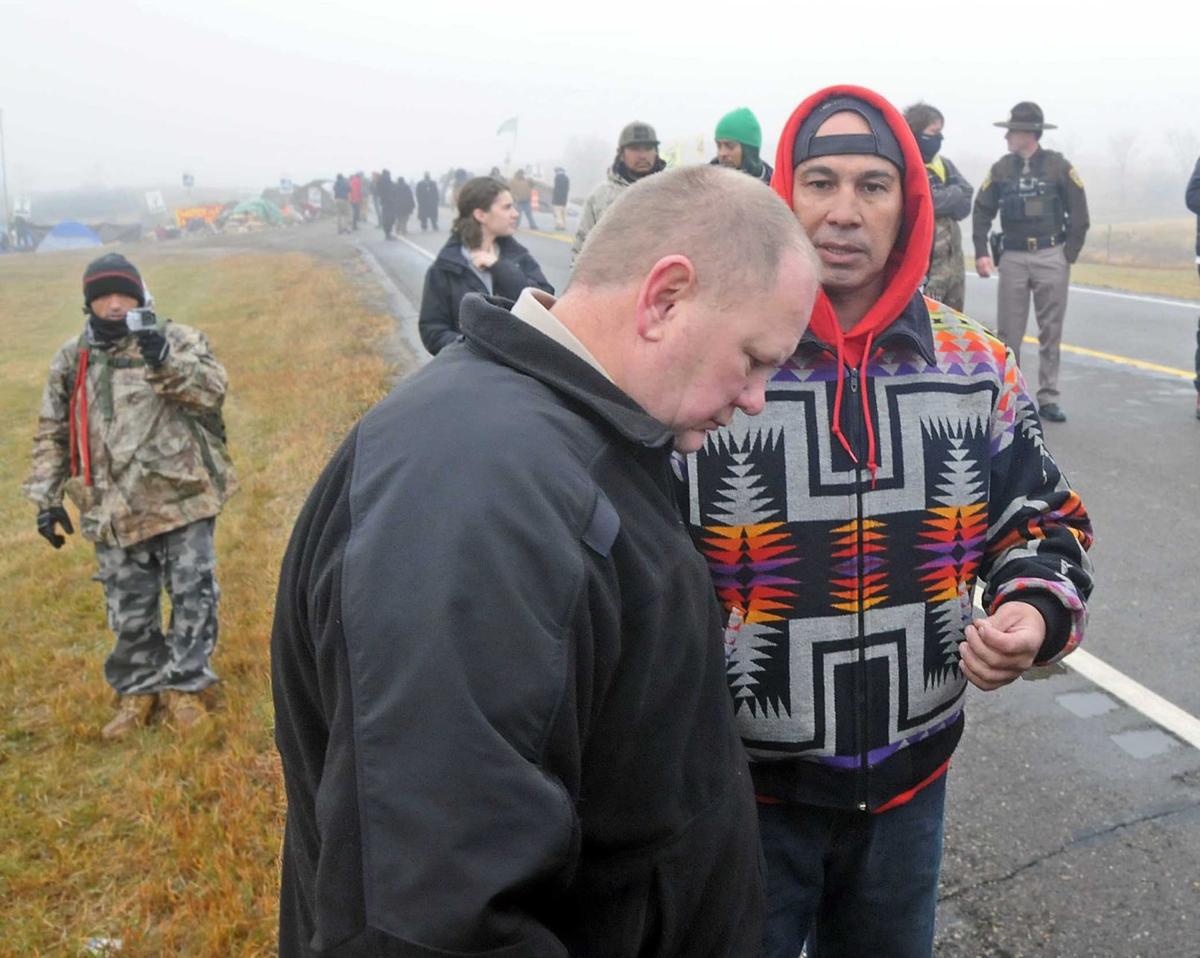 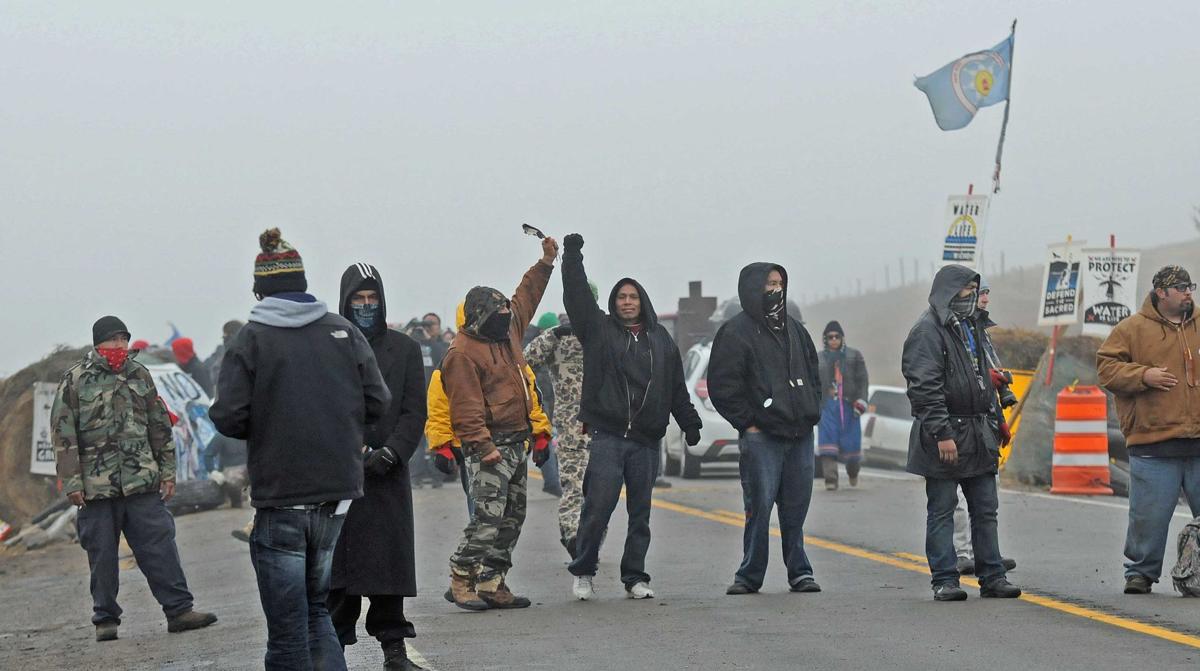 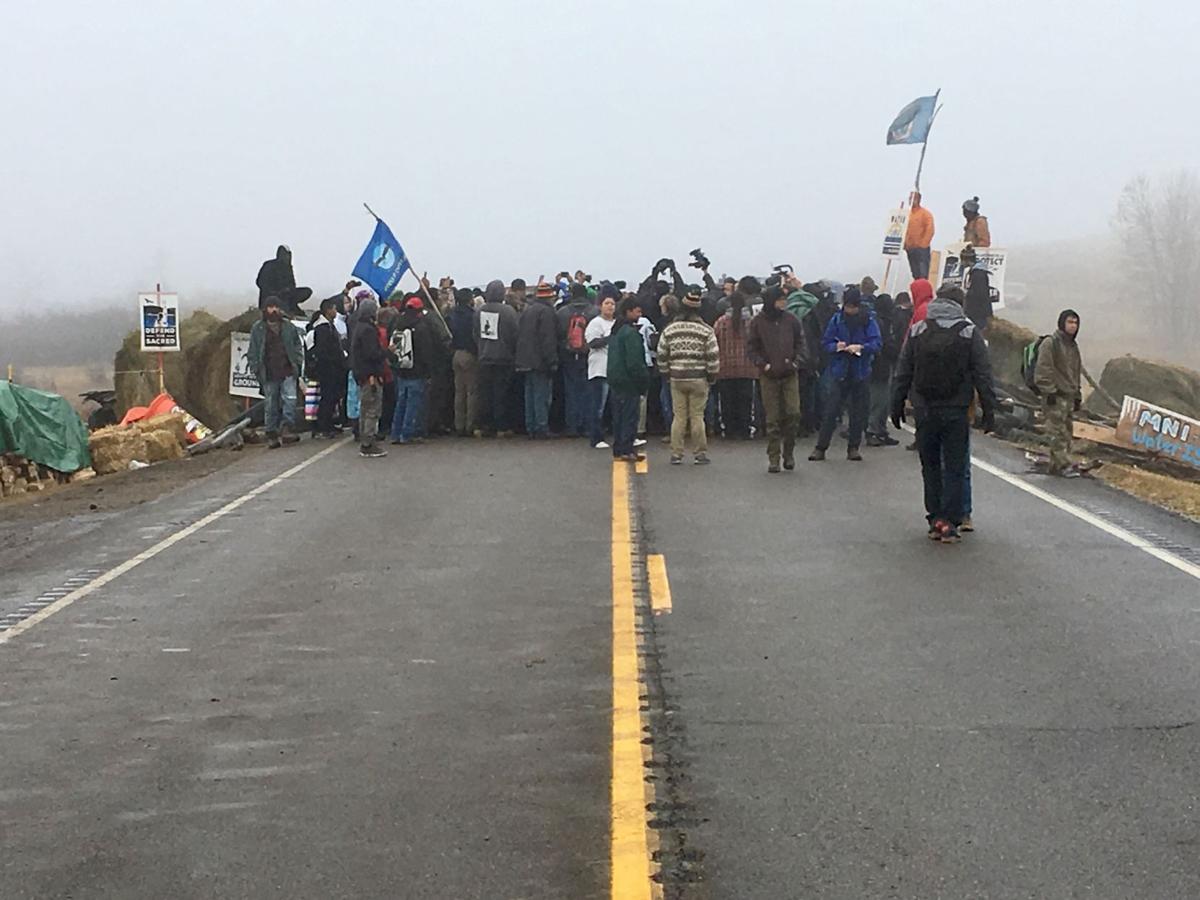 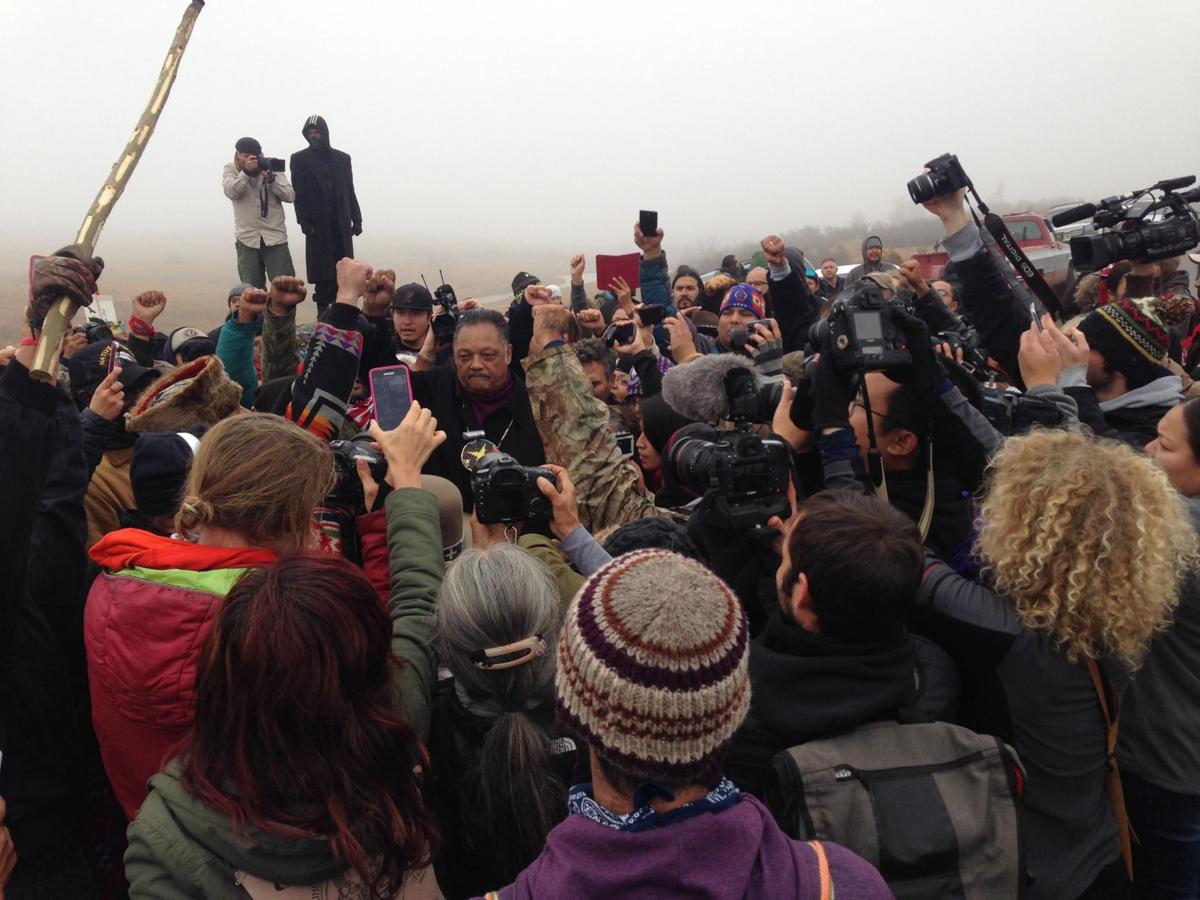 The Rev. Jesse Jackson speaks to protesters at a roadblock on Highway 1806 on Wednesday. 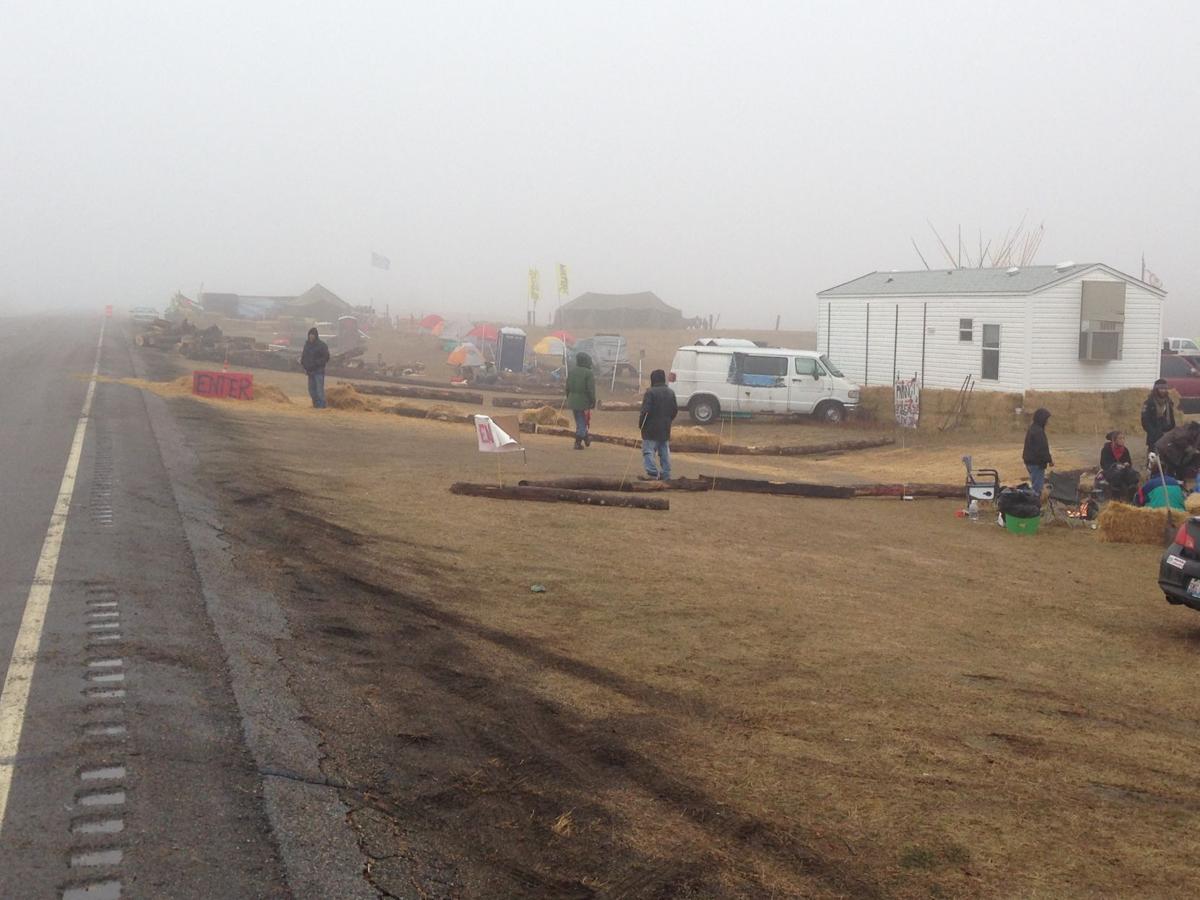 The frontline camp protesting the Dakota Access Pipeline grew to 200 on the morning of Wednesday, Oct. 26, 2016, including the addition of a trailer to be used by camp security volunteers. 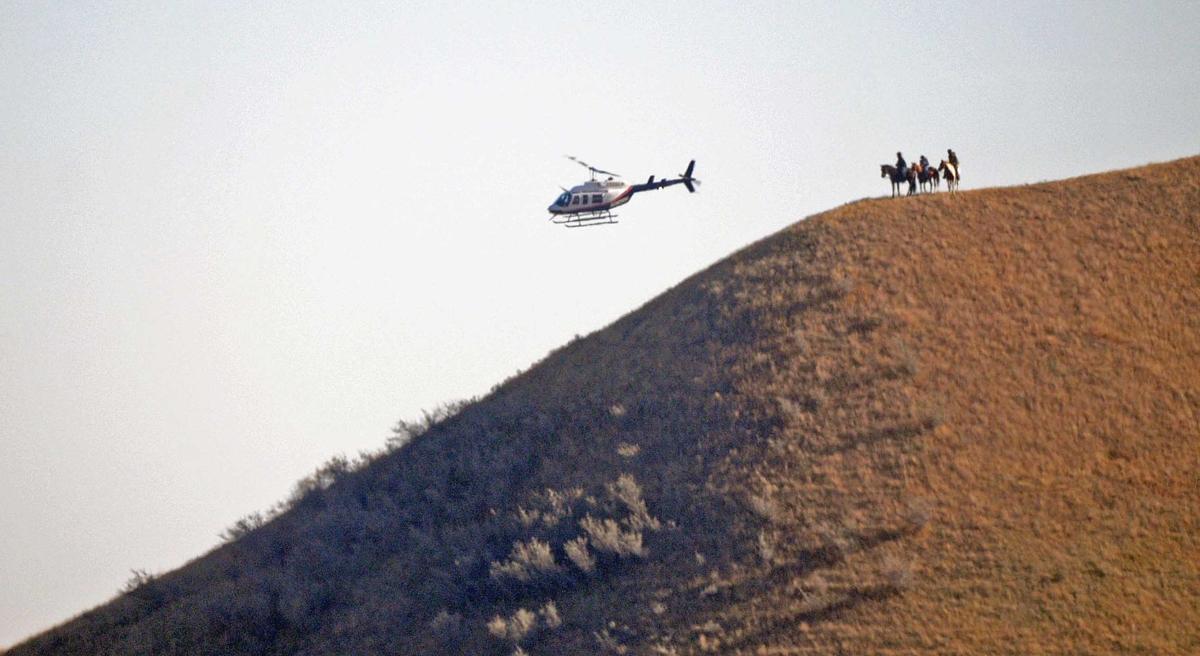 Three people on horseback watch from a hill as a helicopter sweeps by on Wednesday afternoon near the new protest camp on the Dakota Access Pipeline easement in southern Morton County. 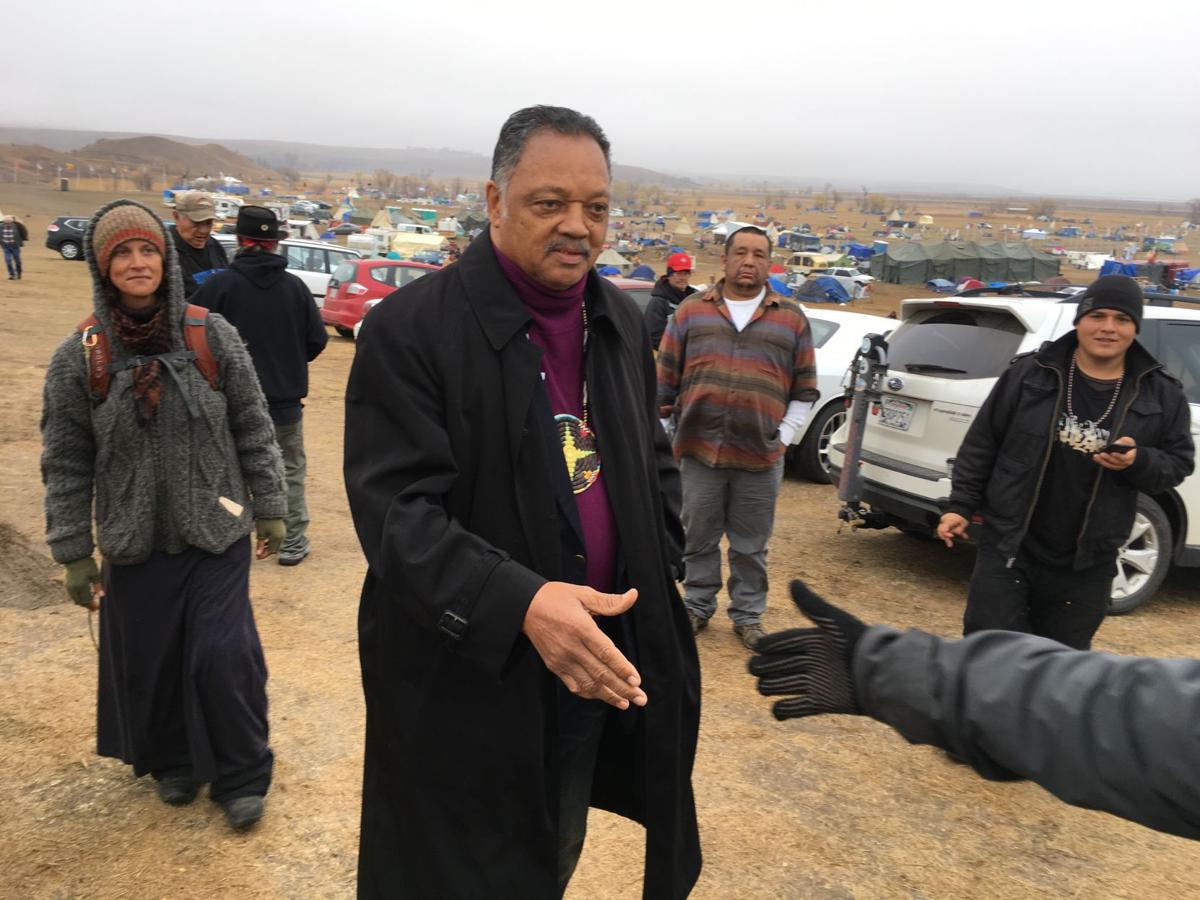 Jesse Jackson met with pipeline protesters on Wednesday at the new camp on the Dakota Access Pipeline easement.

MORTON COUNTY -- Negotiations between Dakota Access Pipeline protesters and law enforcement broke down Wednesday morning, leading to a long and tense day of anticipation over whether police would raid the new camp, which its denizens are calling a "no-surrender line."

The camp was established Sunday directly atop the pipeline easement. The land was recently purchased by Dakota Access LLC, but protesters say it belongs rightfully to the Sioux people.

For a time Wednesday, a law enforcement raid seemed imminent. Later, rumors circulated that President Barack Obama had stopped the surge. By midafternoon the tension had eased, but people still kept watch.

The events followed a conversation between top law enforcement officials and protest leaders near the new camp. Law enforcement wanted to convince the activists to voluntarily remove barriers, including an on-and-off human blockade, from the public road and clear the camp.

But the conversations failed as protesters maintained they would not back down.

"No surrender, no retreat!" protest organizer Mekasi Camp-Horinek, of Oklahoma, called out to those gathered nearby as he walked away from the negotiations.

Morton County Sheriff Kyle Kirchmeier indicated he would continue trying to work with the protesters, but conceded at a press conference that talks failed Wednesday.

Kirchmeier said he advised the protesters that highways and county roads cannot be blocked. He did not designate any particular timetable other than asking that the activities end peacefully.

Camp-Horinek said he told police the group did not intend to relocate, then warned protesters to expect 300 officers to remove everyone from the camp and take them to jail.

Cass County Sheriff Paul Laney, who is leading operations, said he encouraged protesters to return to the main camp on U.S. Army Corps of Engineers land.

“We have the resources. We can go down there, and we’re trying everything we can to not have to do that," Laney said. "At some point, rule of law needs to be enforced."

Dozens of protesters formed a human blockade on N.D. Highway 1806 backed up with horses and hay bales. Many wore bandannas over their faces, and a few carried goggles in case of pepper spray as they waited for the police to come.

They planned to stand their ground, even if that meant getting arrested.

"We've got to make our bodies a living sacrifice," said John Perko, a protester from South Dakota. "This is the most honorable thing I could be doing right now."

Protester Andy Kilchrist, 71, who was arrested Saturday in the biggest one-day roundup to date by law enforcement, carried a bag with fleece pajamas in anticipation of being cuffed again and taken to jail.

"So what? What am I going to do with the rest of my life?" she said.

One activist walked up and down the roadway calling out a lawyer's phone number. "Write it on your body," he told protesters, and at least one man rolled up his pants and wrote the number on his calf.

Standing in a deep group, he led prayers for hope and strength, drawing connections between the history and struggles of African Americans and Native Americans.

"America can never be whole until the Native Americans are treated with justice," Jackson said.

Opponents of the $3.8 billion, four-state oil pipeline worry a leak could contaminate the drinking water for millions of people and construction could disrupt sacred sites. It is nearly complete in North Dakota, but does not yet have permission to cross under the Missouri River.

Protesters say the property where they recently set up at least 15 tents, 100 teepees and one semi-permanent structure is unceded land from the 1851 Treaty of Fort Laramie. They are claiming eminent domain in the hopes of retaking it and stopping the pipeline from crossing the highway and, ultimately, the river.

Law enforcement has repeatedly called the new camp illegal, and Dakota Access LLC said Tuesday in a statement that "all trespassers will be prosecuted to the fullest extent of the law and removed from the land."

Standing Rock Sioux Chairman Dave Archambault II said the pipeline protest is "in a corner" and he wishes the company would slow down and give the process more time.

As far as the treaty dispute, Kirchmeier said that is beyond his job parameters.

Early Wednesday afternoon, a rumor began to circulate that Obama had stopped an impending police raid, but that remained unconfirmed by evening.

"The sun is coming out, so maybe it is true," said Vanessa Dundon, a member of "the expendables" -- the security team that camps by the barrier at night, ready to block traffic if law enforcement appears.

But others were more wary.

"It would be a blessing, but it's just hearsay right now," said Cody Saint, another security team member.

Saint stood at the blockade all day as it transitioned from a line of people to a cluster around an altar with burning sage and a medicine stick, which protesters said marked the no-surrender line.

"We expect them to do whatever at any minute," he said.

The Rev. Jesse Jackson speaks to protesters at a roadblock on Highway 1806 on Wednesday.

The frontline camp protesting the Dakota Access Pipeline grew to 200 on the morning of Wednesday, Oct. 26, 2016, including the addition of a trailer to be used by camp security volunteers.

Three people on horseback watch from a hill as a helicopter sweeps by on Wednesday afternoon near the new protest camp on the Dakota Access Pipeline easement in southern Morton County.

Jesse Jackson met with pipeline protesters on Wednesday at the new camp on the Dakota Access Pipeline easement.