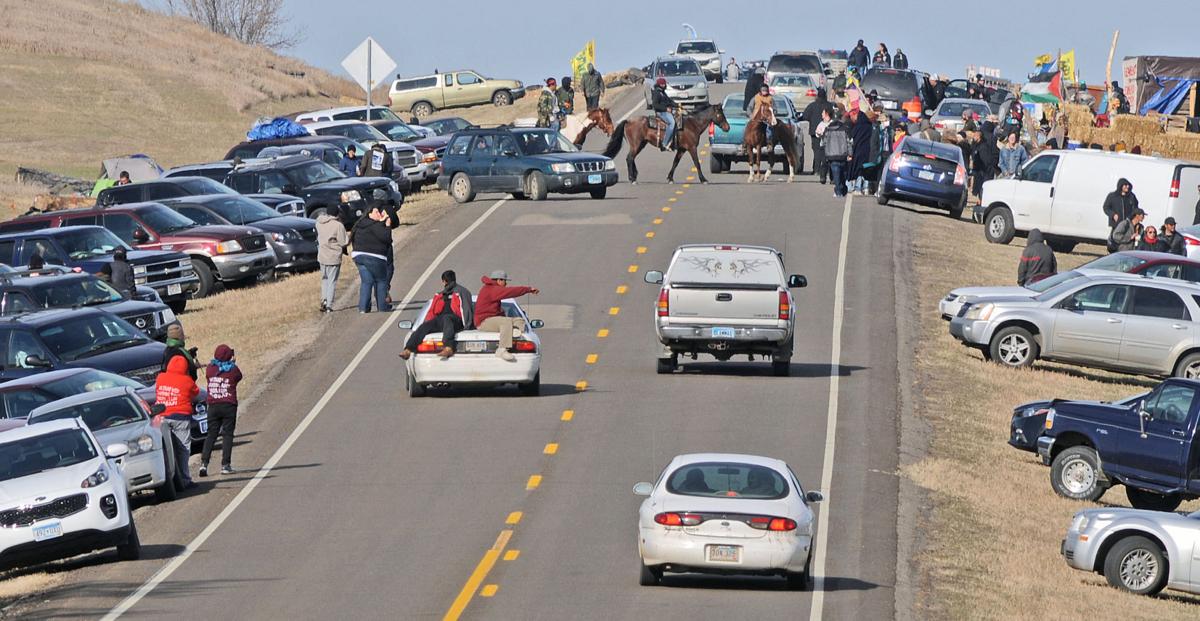 People protesting the Dakota Access Pipeline line North Dakota Highway 1806 in Morton County at the site of a new camp which was being put together on Monday. On Sunday, a road block made from rocks, wood and hay bales was put in place but later taken down. For more photographs and videos, go to www.bismarcktribune.com. 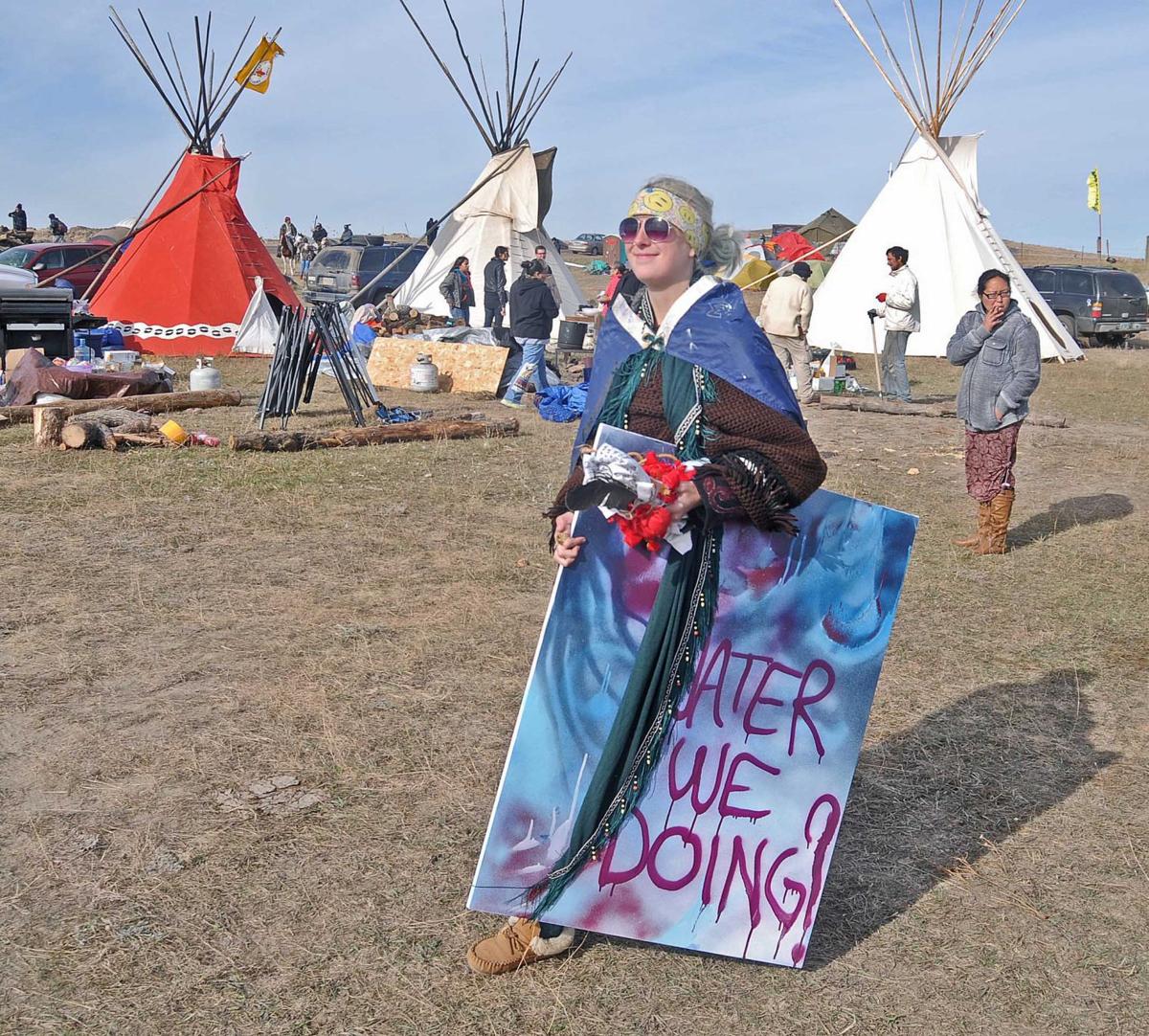 Delilah Rust carries a painting with the words "Water We Doing" while walking through the new camp in Morton County. The camp is north of the large Sacred Stones Overflow Camp and is on the route of the Dakota Access Pipeline. To view a video of Rust singing a light-hearted song with Rico Padilla, go to www.bismarcktribune.com.

MORTON COUNTY — With teepees, tents and outdoor kitchens, protesters are digging in at a new camp directly atop the Dakota Access Pipeline route in Morton County.

Responding to what they see as an "imminent threat" that the pipeline will cross the Missouri River, about 200 people have staked out on land purchased by Dakota Access last month and are trying to reclaim it through reference to an 1851 treaty with the Lakota and Dakota tribes.

Law enforcement is calling the new encampment illegal but has not made a move to clear people from the land. Meanwhile, protesters are stating a claim of eminent domain.

"We are working on a plan, trying to communicate with them to come to some kind of agreement," said Morton County Sheriff's Department spokeswoman Donnell Preskey, adding that the goal would be for people to remove themselves.

Authorities also announced Monday that Highway 1806 would be closed indefinitely at Fort Rice to the north and at Highway 24 to the south, due to the number of vehicles surrounding this new camp, which is situated a few miles north of the Standing Rock Indian Reservation boundary across from an area where a clash between protesters and private security with dogs took place last month.

Joye Braun, a protest organizer, who recently moved from the Sacred Stone camp to the new northern camp, said the assertion of eminent domain is justified by the danger the pipeline could pose to the water supply and sacred sites she said are nearby.

Braun said the impetus to establish this larger camp where only a few people were previously was the "imminent threat" of the pipeline, which is nearing completion in the area, though the Army Corps of Engineers has not yet granted an easement to bore under the river.

"There has always been a possibility if the pipe had come this close, if we were in this danger and the water of our people was in jeopardy," she said of building this northern camp now.

About 200 people camping in 15 teepees and 100 tents have set up on the grounds. There is a new cooking area, and protesters have established entry and exit ways along with designated parking lots. Flags deck the remaining barbed wire fences around the property.

The new northern camp is guarded by a movable roadblock of hay bales and logs that a camp security guard, who sleeps in a tent in the ditch alongside, said she'll put in place if she believes police are coming to raid the camp.

"If we see them coming, we can shut it down again," said Vanessa Dundon, the member of the security team. The protesters barricaded the road on Sunday as they moved into the new camp and reopened it after law enforcement said they would be held liable in an emergency.

Dundon and others said they were establishing winter camp there, and not on the Standing Rock Indian Reservation, where the tribal council set aside land, because they would be less able to demonstrate against the pipeline from there. Law enforcement has grown more savvy in setting roadblocks when they suspect protesters are moving toward work sites in the hopes of stopping construction.

"We want to get our foot a little closer into the door," she said.

In response to the new encampment and protests over the weekend that led to 127 arrests, Morton County Sheriff's Department announced Monday that more deputies would be arriving from other states to assist in policing the protests, which law enforcement has said are escalating.

Though Braun rolled her eyes when asked if she feared police would come and raid the camp, scares that police were on the way rippled through during the afternoon on Monday.

Protesters briefly erected the barricade when reports came in that dozens of police cars were headed south around 2:30 p.m. Women and children were encouraged to go back to the main camp, and people reparked their cars so they would have easy access out in an emergency.

But not everyone believes the roadblock is a smart option, and some security team members were simply encouraging people to stay off the road in case law enforcement came through.

"It was a panic thing," said Frank Archambault, a cousin of chairman Dave Archambault II who was helping coordinate security closer to the camp itself, of putting up the barricade on Sunday. "It's just a bunch of young, wound up people running off emotion."

Archambault said the goal is "holding the ground" at the pipeline site, so that the construction cannot go through.

Meanwhile, many protesters feel morally justified in camping on this land, citing the 1851 Treaty of Fort Laramie, which they contend has been repeatedly broken.

"We stand in honor of our treaty," said Loren Bagola, of the Cheyenne River Sioux Tribe.

WILLISTON (AP) — A Williston man is on trial for allegedly running over several neighbors with his truck, killing one of them.

'Concerning' asteroid will break into Earth's orbit in a week: NASA

'Concerning' asteroid will break into Earth's orbit in a week: NASA

People protesting the Dakota Access Pipeline line North Dakota Highway 1806 in Morton County at the site of a new camp which was being put together on Monday. On Sunday, a road block made from rocks, wood and hay bales was put in place but later taken down. For more photographs and videos, go to www.bismarcktribune.com.

Delilah Rust carries a painting with the words "Water We Doing" while walking through the new camp in Morton County. The camp is north of the large Sacred Stones Overflow Camp and is on the route of the Dakota Access Pipeline. To view a video of Rust singing a light-hearted song with Rico Padilla, go to www.bismarcktribune.com.