Become a Member
Read Today's E-edition
Share This
Delivering supplies to protest camp could warrant $1,000 fine
0 Comments
Share this
1 of 2 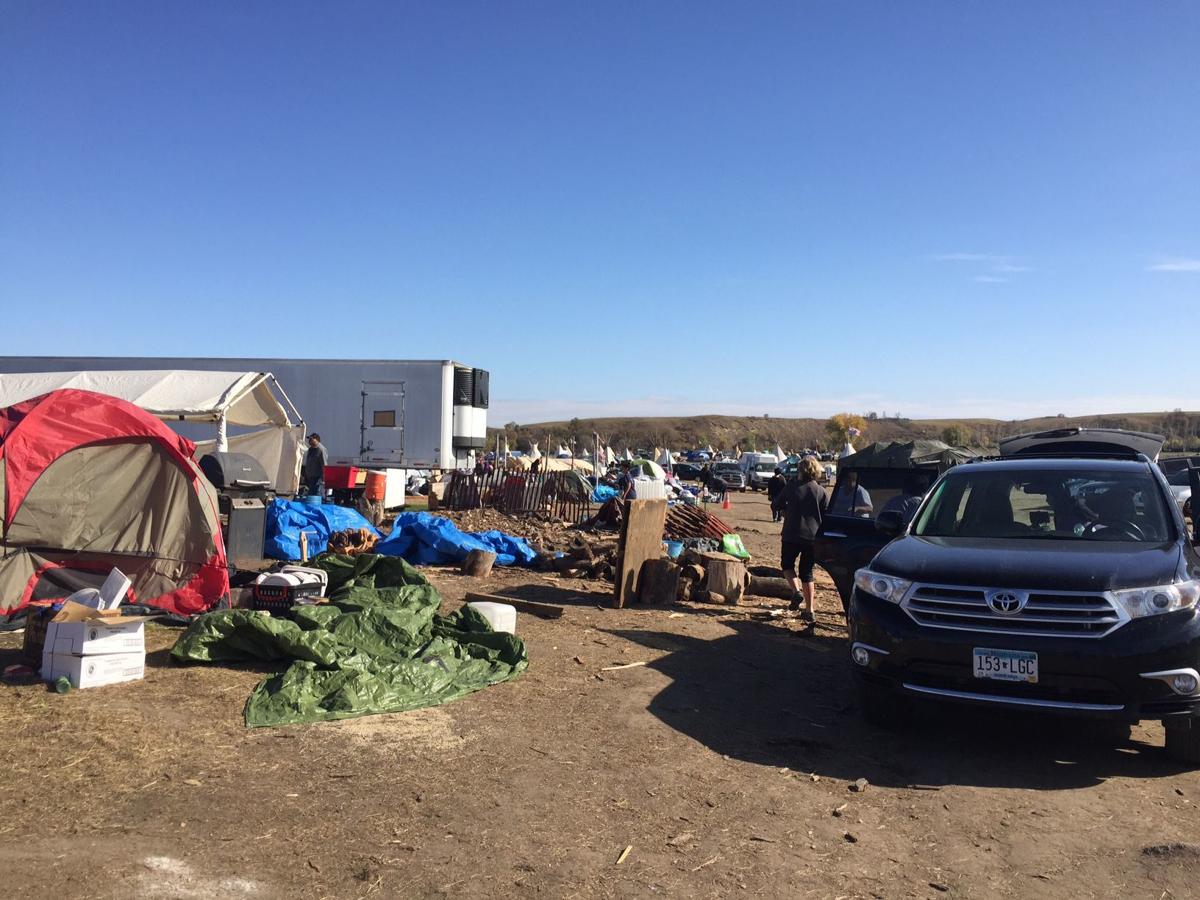 People unload supplies at the Oceti Sakowin camp in Morton County in October. 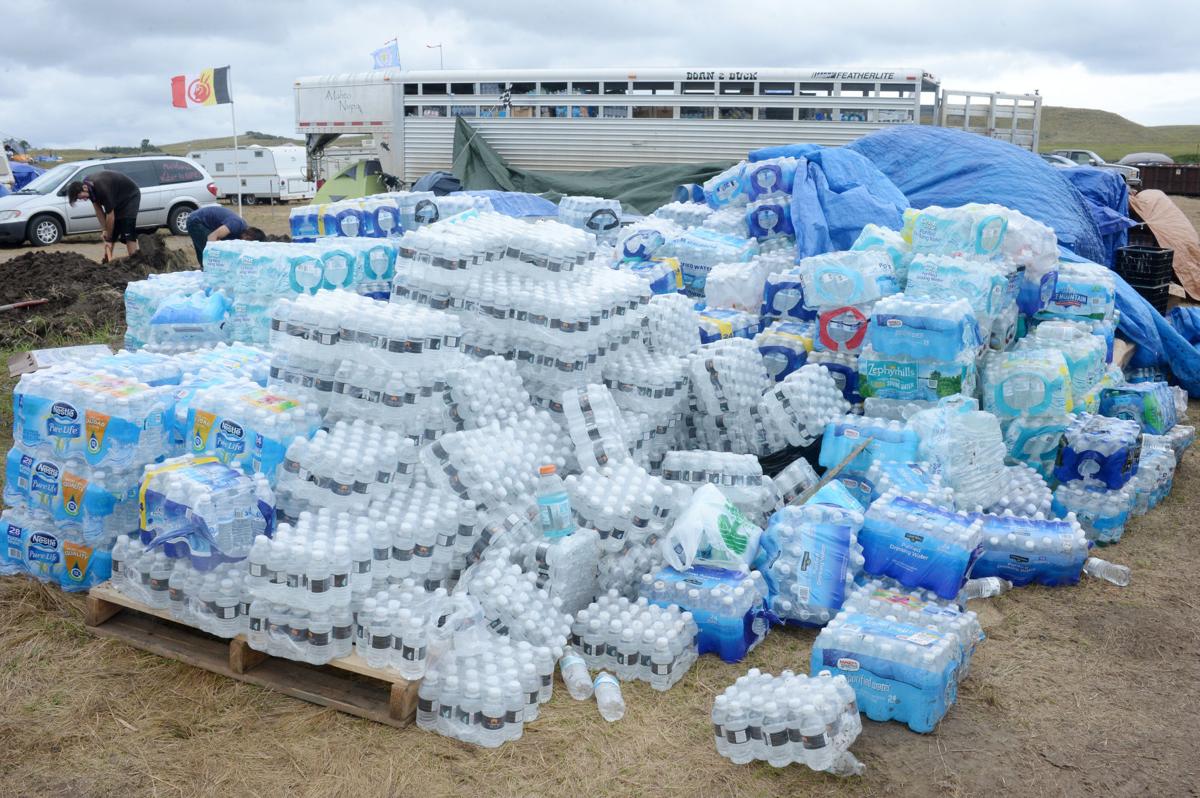 A large supply of bottled water sate at the pipeline protest camp in southern Morton County was piled up in September.

Anyone delivering supplies to the main protest camp in Morton County could be subject to a $1,000 fine for violating the emergency evacuation order, but a local minister said this will not deter her church from providing support.

"It's cold out, really cold, and people need our help. Solidarity doesn't stop when the warm weather stops," minister Karen Van Fossen, of the Bismarck-Mandan Unitarian Universalist Congregation, wrote in an email Tuesday.

"As people of faith and conviction, we are committed to peaceful, prayerful solidarity with Standing Rock. If supplies are needed to survive the long winter, we will do our best to provide them," she said.

Van Fossen has delivered supplies to the Oceti Sakowin camp and hosted prayers and informational sessions over the past several months. The church is raising funds to put a winterized yurt there, according to an online fundraiser.

"We have been a Bismarck-Mandan drop off site for supplies for many months. Local folks have donated everything from diapers to sleeping bags to winterized tents to snack crackers. It has been our honor to carry these items to Standing Rock," she said.

Maxine Herr, spokeswoman for the Morton County Sheriff's Department, said law enforcement is "being observant" of vehicles heading down county roads near the camp and could potentially pull over vehicles suspected of delivering supplies to the camp, which Gov. Jack Dalrymple ordered to be evacuated on Monday. Herr said officers will warn people carrying goods to camp that they could be subject to an infraction with a maximum penalty of $1,000.

"The spirit of it is public safety," Herr said. "It's not safe for them to be down there in those conditions."

A spokesman for the governor said the evacuation order was made with "no intention to block supplies going to the camp."

"The governor signed this evacuation order out of concern for the safety of those that are down there at that camp," said Jeff Zent, spokesman for Dalrymple. "(He) had no intention to create some sort of supply blockade."

Herr said there had not been reports of law enforcement stopping such vehicles as of Tuesday afternoon. There are no plans for a roadblock on Highway 6, the main road to the camp since the Backwater Bridge on Highway 1806 was closed in October, she said.

Herr indicated that prohibited supplies include "anything that goes to sustain living there," including wood, food and blankets. She said the rule applies equally to individuals and businesses ferrying supplies to the camp.

"They need to evacuate," Herr said. "The executive order is clear that it’s public safety. If they ignore it, they have to live with the consequences of potentially freezing to death."

A representative of the American Civil Liberties Union of North Dakota objected Tuesday to the governor’s evacuation order and said the organization is considering litigation.

Jennifer Cook, policy director, said while the governor says safety is the reason for the evacuation order, it’s contradictory to order the evacuation during a winter storm and to restrict people’s access to food and supplies.

“It’s a broad order and the enforcement of it is a major concern for the safety and the well-being of the people in the area,” said Cook, adding she has concerns about people’s rights being violated if motorists are cited for delivering supplies to the camp.

“There are a lot of constitutional concerns,” Cook said.

Dalrymple issued the mandatory emergency evacuation order Monday to the hundreds of Dakota Access Pipeline protesters camping on U.S. Army Corps of Engineers' land near the Missouri River. The edict was given as a winter storm has dumped at least a half foot of snow throughout the central part of the state. It followed an order by the corps that the land will be closed to the public on Monday.

The governor's order means that emergency services will not be made available to people at the camp except on a case-by-case basis. The order is effective since Monday and will remain until he rescinds it.

In a statement Monday night, Standing Rock Tribal Chairman Dave Archambault II called the order "a menacing action meant to cause fear and is a blatant attempt by the state and local officials to usurp and circumvent federal authority."

"The governor cites harsh weather conditions and the threat to human life. As I have stated previously, the most dangerous thing we can do is force well-situated campers from their shelters and into the cold," Archambault said.

Bismarck woman killed in crash on I-94

TOWER CITY — Kelli Hagerott, a 43-year-old Bismarck woman, was killed when the SUV she was riding in collided with an unoccupied tow truck tha…

A massive data center for cryptocurrency mining is in the works west of Williston.

Authorities have identified a Garrison man killed in a crash north of Bismarck on Tuesday afternoon.

WH: We 'don't know' if Russians are playing games

WH: We 'don't know' if Russians are playing games

People unload supplies at the Oceti Sakowin camp in Morton County in October.

A large supply of bottled water sate at the pipeline protest camp in southern Morton County was piled up in September.