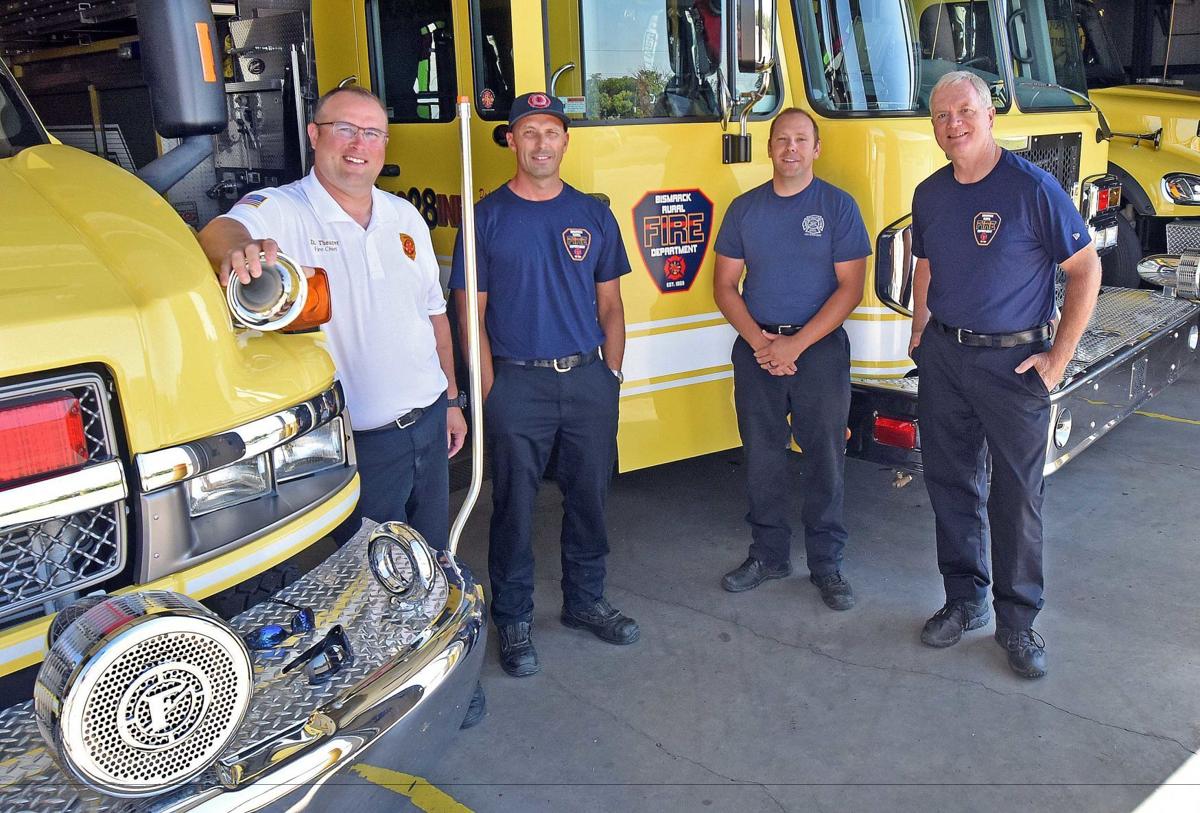 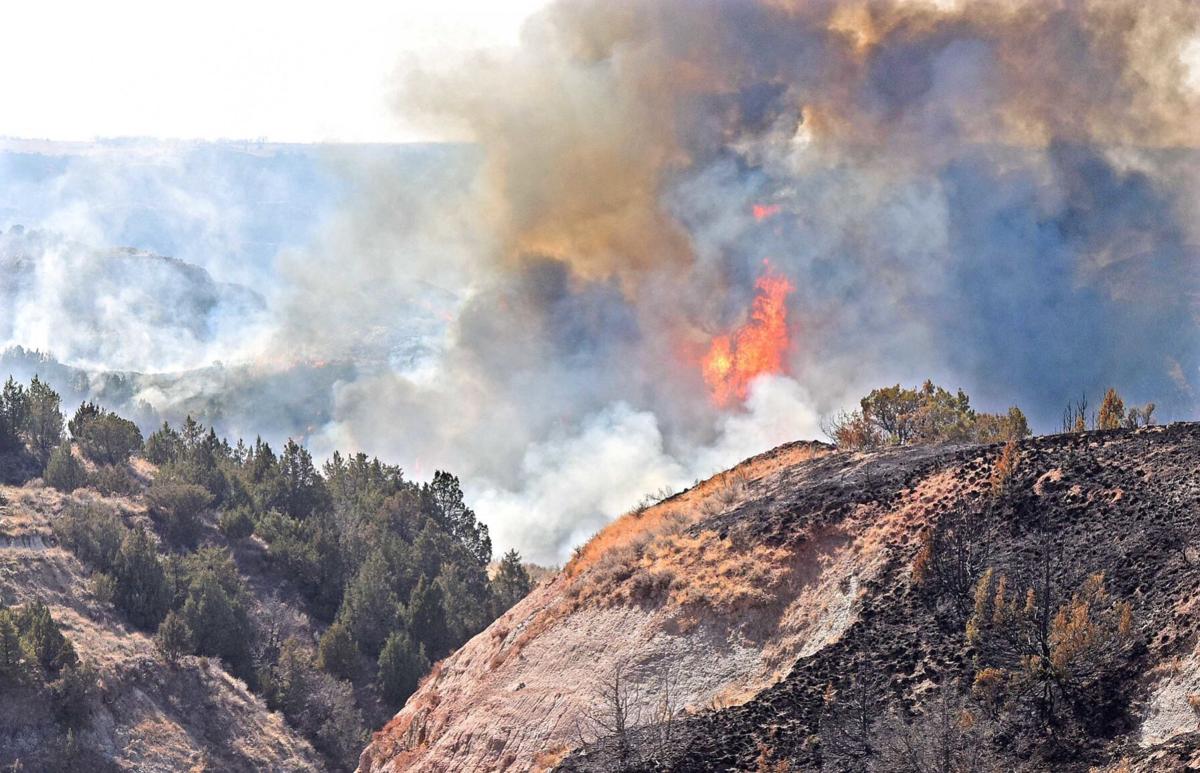 The Horse Pasture Fire burned in rugged terrain in the North Unit of Theodore Roosevelt National Park in April.

Lynn Gustin knows how easily drought can raise the risk for wildfires.

Grass and brush fires this year have begun from lawnmowers, embers escaped from uncontrolled burns and cigarettes thrown along roadways, he said. And high winds exacerbate them all.

North Dakota this spring and summer has had about 1,500 wildfires scorching more than 100,000 acres. The total area burned this year is about eight times what burned in all of 2020. All of the state is struck by drought -- much of it in extreme or exceptional drought. All but a handful of counties have some form of a burn ban or restrictions in place.

Most fires are one-day events, but some bigger blazes can last a few days, according to Aaron Buchholz, cooperative fire protection technician for the North Dakota Forest Service.

"It's just taking more to put them out," he said.

Weather and geography are factors in a fire's extent. Generally, North Dakota's wildfire season is from March-May and sometimes again in fall.

Most wildfires are small, but "a fair amount" this year have surpassed a few hundred acres, and some have scorched more than 1,000 acres, Buchholz said. Grass fires can be "the initial carrier" that spreads to thicker, taller fuel such as trees and brush, he said.

"It's just easier for a fire to get started," as simple as a vehicle dragging chains along a highway, he said. "Just a lot of little stuff that normally wouldn't start (fires) that do now."

The biggest wildfires so far this year have been one in January that burned more than 16,000 acres around the state line near Hettinger and Lemmon, South Dakota, and a 9,803-acre fire in May near Mandaree, according to Beth Hill, the North Dakota Forest Service acting outreach and education manager.

In April, Medora residents temporarily evacuated the town due to a Badlands wildfire that threatened the amphitheater that is home to the long-running Medora Musical. An electrical line that sagged and arced started the fire.

"Really our problems, to me, have been since April 1 moving forward," he said. Most of the state has received 50%-65% of average rainfall so far this year, he said.

But a lack of snow cover last winter did mean that some of last year's grasses weren't compacted but instead left standing, which added to the fuel load, Buchholz said.

Washburn Assistant Fire Chief Travis Vierke said the 2006 drought was "quite worse" for wildfires, when calls came as often as nearly every day for one weeklong stretch, and July 4 fireworks drew a lot of calls that year, too.

Vierke's department has had about an average number of calls this year, which he attributes to "people being a little bit smarter than normal."

Negligence has been the most common cause of fires in his neck of the woods, such as a small trash-pile fire taking off, Vierke said.

The National Weather Service in Bismarck as of last week had issued 20 red flag warnings so far in 2021 for central and western North Dakota; 10 were issued in all of 2020. Red flag warnings denote critical fire conditions due to weather and fuel.

"We definitely have the potential for large fires, but the citizens really did a good job ... of being really safe," Theurer said.

The largest fires the department has responded to this year were ignited by a hot muffler and a spark from a burn barrel, he said.

About 90% of wildfires are caused by humans, according to Hill. The top causes of preventable wildland fires in 2020 were debris burning, equipment use, smoking, campfires and children.

"Everything we can do to be proactive and aware this season will be extremely important for protecting lives, property and local resources," Hill said.

No fires to her knowledge have been started from baby gender-reveals, which often involve incendiary items. A pyrotechnic device at a gender-reveal celebration in September 2020 ignited the El Dorado Fire in California, which burned more than 22,000 acres and killed one firefighter.

Twelve people throughout North Dakota have been charged so far this year with misdemeanors for violating burn bans, including two men charged in McLean County for July 4 offenses.

The state Forest Service has had 42 reports of structures damaged by wildland fires this year, as well as four injuries total, Hill said. Some of the injuries were suffered in the January fire that burned across the state line.

Mutual aid among rural, volunteer fire departments has been key in fighting wildfires when manpower is lacking. The Mandan Rural Fire Department has two stations and 30 members, all volunteer, many of whom can't always leave their jobs to respond, Gustin said.

The department covers more than 725 square miles and averages 80-120 calls per year, and through mid-June was well over 50, he said. Some days have brought multiple calls.

Gustin has been involved for 26 years, including 15 as chief. His family farms and ranches south of Mandan, and he chose to volunteer.

"I guess just like everybody else -- help the community, volunteer, do something that you're helping everybody out," he said.

2021 is one of the driest years in recent North Dakota memory. Drought blankets the state, and its impacts are numerous and enormous. The Bismarck Tribune in a five-part series looks at how this summer’s weather is affecting people, animals, the environment and the economy.

Sunday: Drought is no stranger to North Dakota, but this one is one of the worst this century.

Monday: Farmers and ranchers are dealing with drought that some say is the worst they've ever seen.

Tuesday: Drought is affecting wildlife from fish to birds, and it could put a damper on fall hunting.

Today: Drought has exacerbated conditions for wildfires, nearly all of which are caused by people.

A North Dakota regulator says the state’s oil output is “flat as a pancake” due a lack of crews available to frack wells.

Authorities have dropped two of three felony charges against a Killdeer man accused of defrauding an oil field company he worked for of more than $5 million.

A federal agency plans to fine the operator of the multibillion-dollar Dakota Access Pipeline $93,200 over pipeline safety violations.

DES MOINES, Iowa (AP) — Long before the first presidential nomination contest of 2024, most potential Republican candidates are just getting a…

The Horse Pasture Fire burned in rugged terrain in the North Unit of Theodore Roosevelt National Park in April.