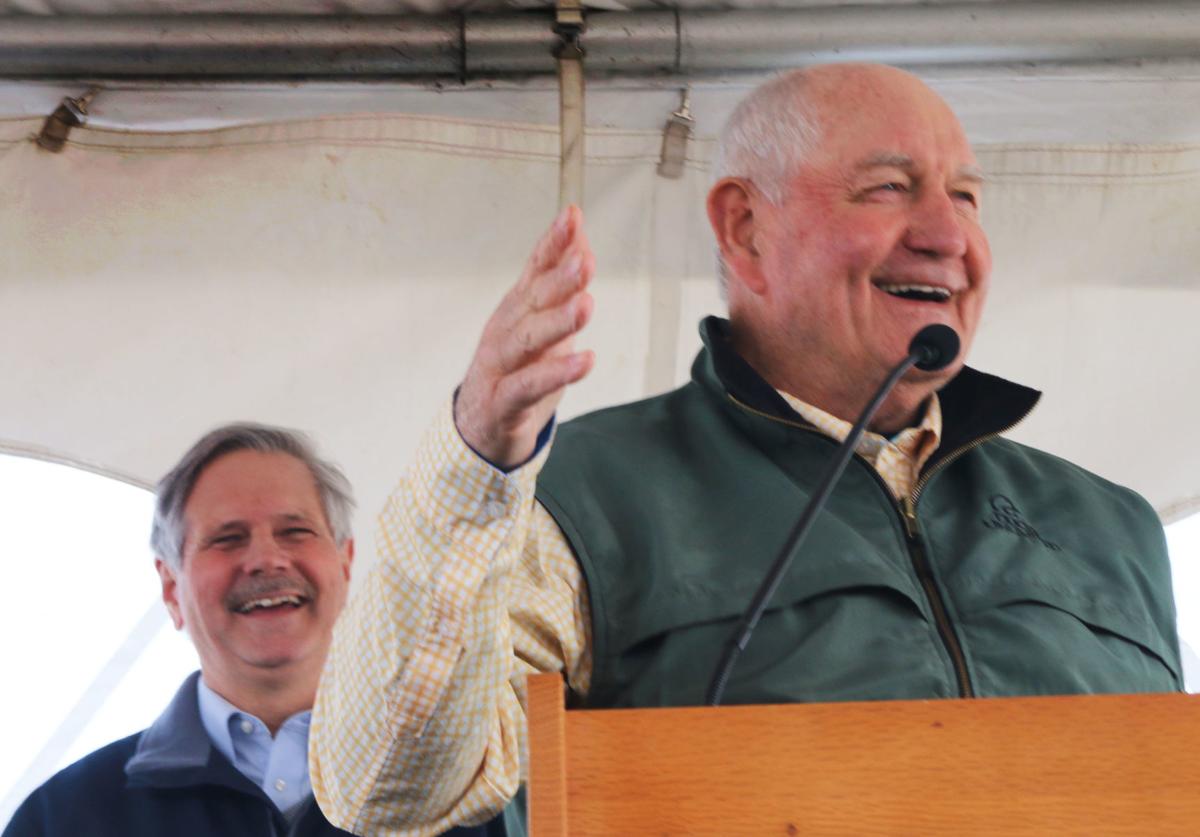 Secretary of Agriculture Sonny Perdue on April 27, flanked by U.S. John Hoeven, R-N.D., congratulates the Grand Farm autonomous farming initiative prior to a ribbon-cutting ceremony at its future home, south of Fargo. 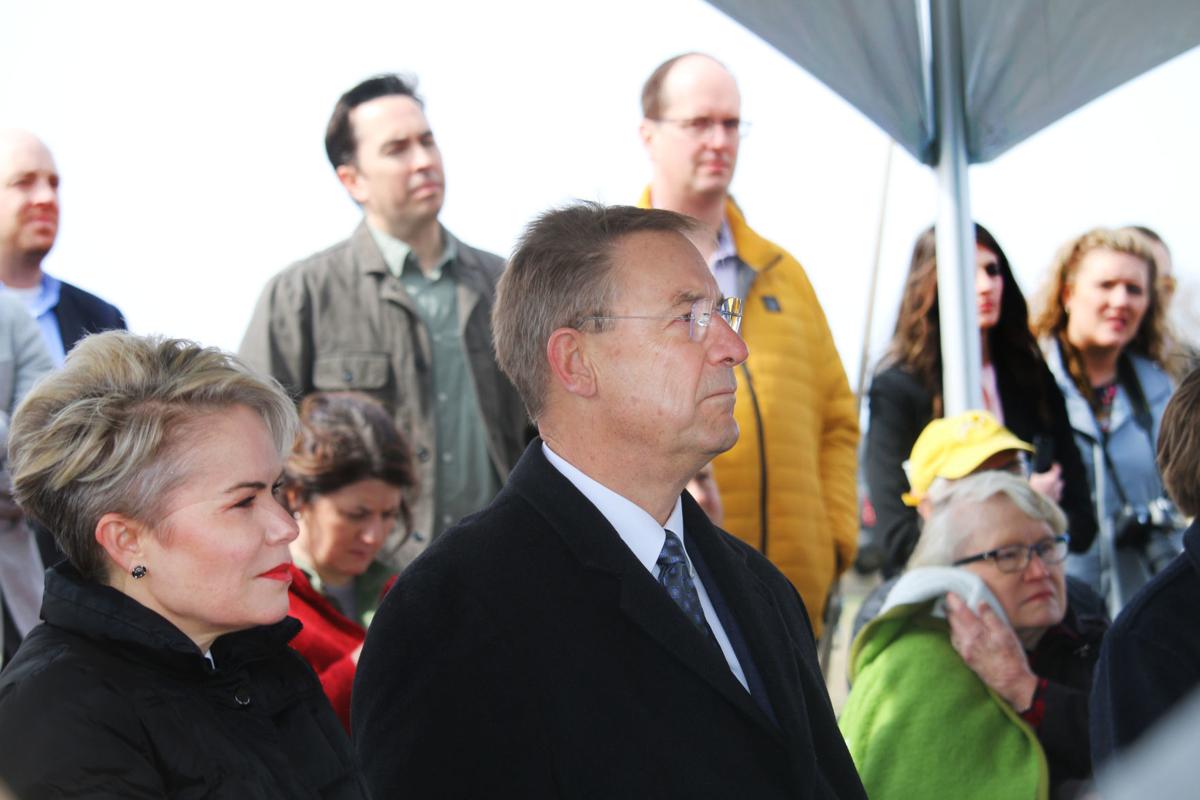 Barry Batcheller, chairman of the board of Appareo Systems of Fargo, is a technical and business adviser for the Grand Farms autonomous farming research initiative at Horace.

HORACE — The region’s Grand Farm autonomous farming research initiative got a big boost on April 27 when U.S. Secretary of Agriculture Sonny Perdue was on hand for its ribbon-cutting ceremony for an autonomous farming technology development project.

About 75 backers of the futuristic farming project gathered at the rural Horace property after a Perdue farm policy roundtable.

Perdue was flanked by a slew of North Dakota Republicans including Gov. Doug Burgum, and Sens. John Hoeven, and Kevin Cramer — at its future location just east of Exit 54 on Interstate Highway 29, south of Fargo.

Perdue told the Grand Farms backers that the project will be important for the noble work of feeding a growing, hungry world.

Hoeven said the initiative will “bring precision agriculture to the next level.” Burgum said it will “show the world a path forward and show what North Dakota can do.”

The Grand Farm initiative is designed to address what promoters say is the “pain points” of farm labor shortage and lack of venture capital to develop technology. Autonomous farming means farming robotically using artificial technology, even through the grain marketing phase, promoters say.

Brian Carroll is director of the project. Carroll also is director of operations at Emerging Prairie, a Fargo non-profit organization that promotes entrepreneurism through programming and networking events.

Ag tech entrepreneur Barry Batcheller of Fargo first brought up the idea at a 1 Million Cups entrepreneurial speaking event in March 2017, saying the project is capable of launching “fully autonomous farm” by the year 2025.

Batcheller is chairman of the board for tech company Appareo Systems of Fargo, and has played key roles at other agribusinesses. A North Dakota State University engineering graduate, Batcheller has been instrumental in creating hundreds of engineering jobs in the community.

Batcheller serves as a technical and marketing and business adviser for the Grand Farm project. “Today, the future’s all about data,” Batcheller said. “The information that’s available today, and will be available to farmers in the future, will revolutionize the way agriculture is performed.”

Batcheller said the Grand Farm will complement the state’s unmanned aerial system development, including a drone park in Grand Forks. The state recently was allowed participation in an integration pilot program, which contemplates the integrating unmanned systems into common use.

Kevin Biffert, Horace, has donated the lease of land for Grand Farm.

Biffert is president of operations of Korber Medipak Systems of NA-Fargo Automation Division. With degrees from North Dakota State College of Science in Wahpeton and the University of North Dakota in Grand Forks, Biffert worked at 3M in Wahpeton and in 1996 founded Fargo Automation, which builds on autonomous equipment for medical device companies and pharmaceutical industry.

Biffert sold Fargo Automation to German-based Korber Solutions in 2017, but still works for the company. After the sale, his family bought 45 acres of land, hoping to create a “tech park.”

Biffert said he thinks half the land might become covered with buildings, while the rest could be used for field testing. The Bifferts have signed a lease for Korber to construct a 15,000-square foot building as a second manufacturing campus in the community.

The separate Grand Farm building will include a conference room and collaborative workspace areas. The lab will be equipped with three-dimensional printers, computer numerical control milling machines, laser cutters, a machine shop and a robotics lab. Biffert also owns other land in the area, which he said could be used to simulate the movement of equipment from field-to-field, which is common in farming today and one of the unknowns for autonomous farming equipment use.

Secretary of Agriculture Sonny Perdue on April 27, flanked by U.S. John Hoeven, R-N.D., congratulates the Grand Farm autonomous farming initiative prior to a ribbon-cutting ceremony at its future home, south of Fargo.

Barry Batcheller, chairman of the board of Appareo Systems of Fargo, is a technical and business adviser for the Grand Farms autonomous farming research initiative at Horace.