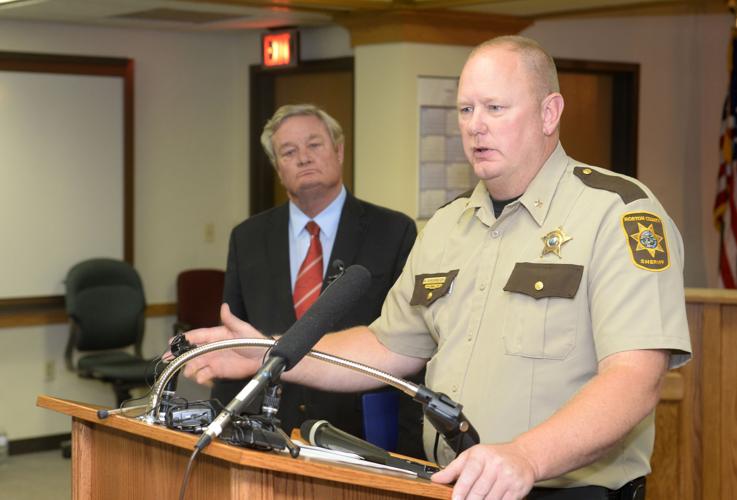 Morton County Sheriff Kyle Kirchmeier talks about the plan to change the Highway 1806 roadblock into an information station. Standing behind him is Gov. Jack Dalrymple. 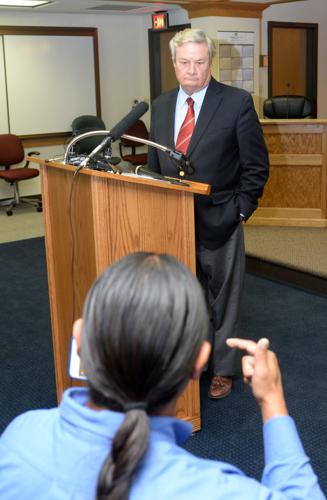 North Dakota Gov. Jack Dalrymple listens to a question during a press conference in Mandan on Thursday.

The North Dakota National Guard will be activated to assist local law enforcement responding to the Dakota Access Pipeline protests south of Mandan, according to an announcement on Thursday by Gov. Jack Dalrymple.

Dalrymple said the decision was made "out of an abundance of caution" in order to free up law enforcement to patrol Morton County and the Bismarck-Mandan area.

Several armed guardsmen will be posted at a checkpoint along Highway 1806 south of Mandan, which has been reopened. They will provide information about road hazards to drivers passing through.

About 100 guardsmen from the 191st Military Police Company also will be on standby alert, said Maj. Gen. Al Dohrmann. This unit, which is based in Bismarck, Mayville and Fargo, has some law enforcement experience.

Meanwhile, as the annual powwow takes place in Bismarck and a federal court decision is expected today on the tribe's request for an injunction to stop construction on the pipeline, additional law enforcement officers will patrol the area this weekend.

Morton County Sheriff Kyle Kirchmeier said he wanted to be able to respond more quickly to situations that arise at the protest camps and for residents nearby. Deputies will not be stationed at the camps.

Thirty-seven people have been arrested in connection with the protests for trespassing on private property, refusing to stay in boundaries set by police and chaining themselves to construction equipment.

With the resources he had available Saturday, when a clash broke out between protesters and private pipeline security, Kirchmeier said he did not have the manpower needed to go in and make arrests.

"We want people to have a safe weekend," he said.

"Any act of violence hurts our cause and is not welcome here," he said. "Even if the outcome of the court’s ruling is not in our favor, we will continue to explore every lawful option and fight against the construction of the pipeline."

Dohrmann said he is in discussions with tribal leaders to find a peaceful resolution to the protests. He said he believes there is a group of "agitators" at the site, some of whom have been asked to leave.

Highway 1806 was closed Aug. 17 by Highway Patrol and the Department of Transportation for safety concerns. Tribal members and civil rights groups called for its reopening, citing economic impacts on the tribe and hindrance to First Amendment rights.

"We want to make sure that everybody that is going down on Highway 1806 can get where they're going with families," said Kirchmeier, explaining the reason for reopening the road. "We have had many conversations with tribal leaders trying to keep the roadway open."

The parks in the area will remain closed.

North Dakota Highway Patrol Col. Mike Gerhardt said measures have been taken to make Highway 1806 safer for drivers. The speed limit around the protest sites has been reduced to 25 mph, new signs have been posted and troopers will be patrolling the area.

Since a state — not federal — emergency declaration has been issued, federal funds are not available, Dalrymple said.

Dallas Goldtooth, a protest organizer with the Indigenous Environmental Network, said Dalrymple is sending a disturbing message by bringing in the National Guard.

“I think it’s deeply concerning to see this escalation from the governor of North Dakota," he said.

Goldtooth applauded the removal of the Highway 1806 barricade, a move he called "two weeks overdue."

Still, he said he's not sure what will happen after the federal judge issues his ruling.

“There’s a general anxiety or uncertainty about (Friday)," he said.

The North Dakota National Guard was last deployed at airports after the 9/11 terrorist attacks. In 1969, it was called to respond to the Zip to Zap rioting.

Rallies are being planned in cities across the nation on Tuesday to urge President Barack Obama to stop the Dakota Access Pipeline.

Organizers say Sen. Bernie Sanders will speak in Washington, along with Tara Houska of Honor the Earth and other tribal leaders.

Organizers believe the president has the power to intervene in the Dakota Access dispute as he did with the Keystone XL project.

DR Congo says more than 270 killed in massacre by rebels

DR Congo says more than 270 killed in massacre by rebels

Morton County Sheriff Kyle Kirchmeier talks about the plan to change the Highway 1806 roadblock into an information station. Standing behind him is Gov. Jack Dalrymple.

North Dakota Gov. Jack Dalrymple listens to a question during a press conference in Mandan on Thursday.