The North Dakota Supreme Court has ruled in favor of the state in a dispute involving deductions taken from natural gas royalties.

The decision, issued Thursday, stems from a lawsuit Newfield Exploration filed against the state after the Department of Trust Lands conducted an audit in 2016 that claimed the company was underpaying royalties to the agency.

The deductions are for “post-production costs,” which include steps such as gathering and removing impurities from the gas to get it ready for sale further down the processing chain.

“We’re very pleased with the ruling,” Land Commissioner Jodi Smith said. “It will mean a lot for the state of North Dakota. There’s a significant amount of funds that are being tied up as a result of this case.”

The ruling is not a blanket ban prohibiting oil and gas companies from deducting for post-production costs; it’s specific to the state’s leases with Newfield. But Smith said it will have an impact beyond just those contracts.

Her department has leases with more than 50 oil and gas companies that contain similar language.

She estimates the state has lost out on tens of millions of dollars that companies have deducted from royalty payments in recent years. That money would have gone toward North Dakota’s public education system via the Common Schools Trust Fund.

The Department of Trust Lands will now work with the state attorney general’s office to determine how far back Newfield and other affected operators will need to retroactively pay the state, Smith said.

Newfield was acquired by Encana earlier this year. The company did not immediately respond to a request for comment, nor did two of its attorneys.

North Dakota Petroleum Council President Ron Ness said in a statement that his group, while not involved in the case, was disappointed in the decision. The Supreme Court’s ruling reversed a previous one from a Northwest Judicial District judge.

“The Court’s reversal adversely impacts all operators in North Dakota, especially at a time when we are faced with gas capture and flaring challenges,” he said. “Requiring an oil company to pay royalties on the end price of their product is like taxing a farmer on the price of bread rather than the price of wheat.”

The Department of Trust Lands has a royalty interest in 111 of Newfield’s wells. The company sells the gas it extracts to Oneok.

Newfield gets paid after Oneok incurs post-production costs to process the gas into a marketable form, according to the decision. Newfield made royalty payments to the state based on that reduced amount.

“Newfield asserts the plain language of the leases requires the State’s royalties to be calculated on the payment Newfield receives for the gas from Oneok, regardless of whether that payment is reduced to account for expenses incurred by Oneok to make the gas marketable,” states the Supreme Court’s decision.

But the state argued it should not have to share in the post-production costs, and the court agreed.

Justice Jon Jensen authored the opinion, writing that calculating the royalties based on an amount reduced to account for post-production costs “is contrary to the leases.”

“Gross proceeds from which the royalty payments under the leases are calculated may not be reduced by an amount that either directly or indirectly accounts for post-production costs incurred to make the gas marketable,” he wrote.

Concerns over the interpretation of leases have been growing among mineral owners throughout North Dakota.

“They get these ridiculous amounts in deductions that don’t make sense,” he said.

The language of their leases can differ, and they may not match the state’s leases with Newfield. But Swanson said Thursday’s ruling has caused the pendulum to swing toward those with mineral rights.

“Mineral owners can say, ‘Well they weren’t allowed to do that with a state lease, why should I be different?’” he said. 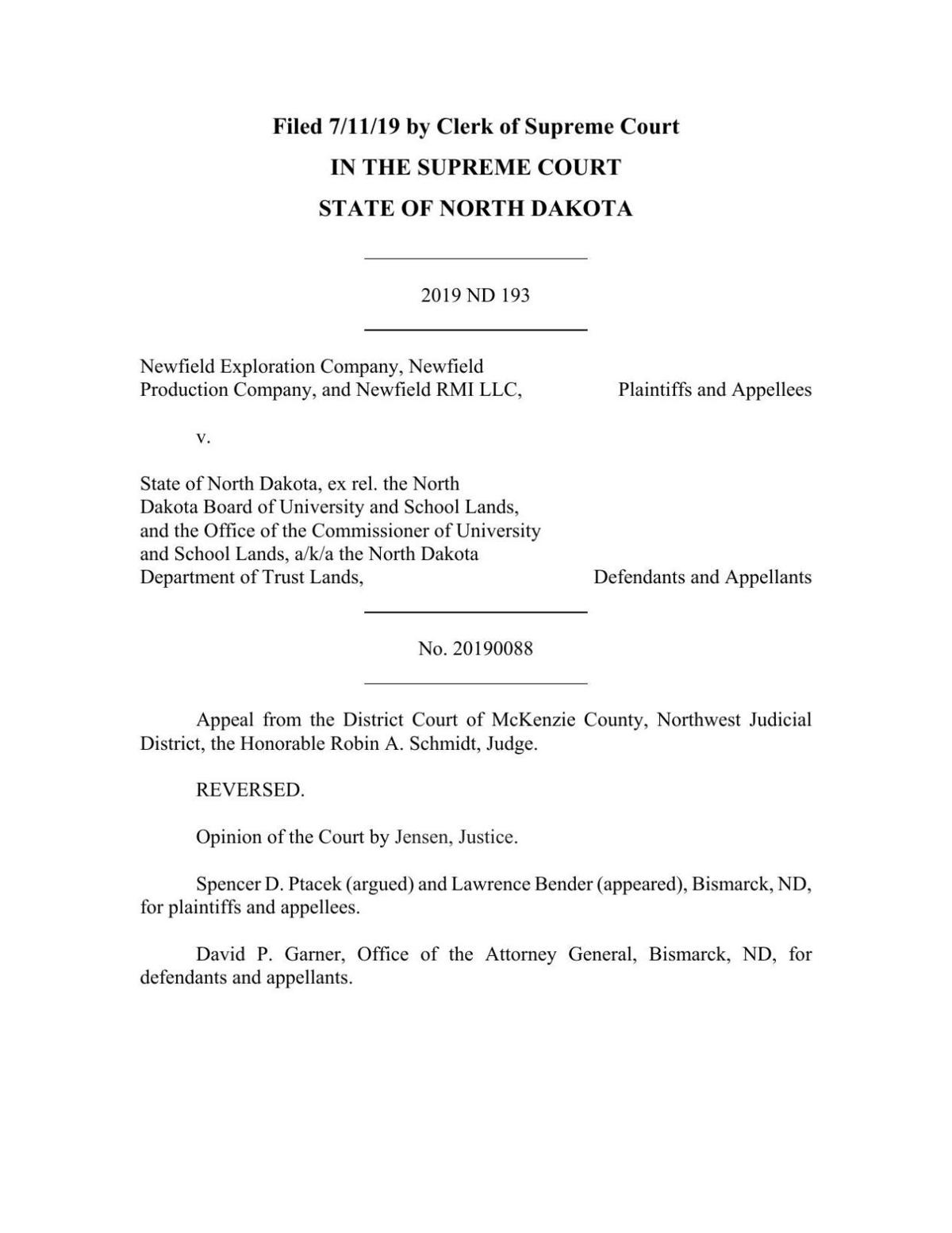 Man accused of speeding up to 116 mph in Watford City

A Glendive, Mont., man was ordered held on $2,500 bond after police say he drove through Watford City at speeds up to 116 mph on icy roads.Bry…

Woman charged with murder in teen's fatal shooting in ND

Authorities in North Dakota have arrested a woman and her brother wanted in Wisconsin for allegedly kidnapping the woman's toddler son.

Defense attorneys in North Dakota deal with a lot of potential pitfalls, but the biggest obstacle they face might be public perception.