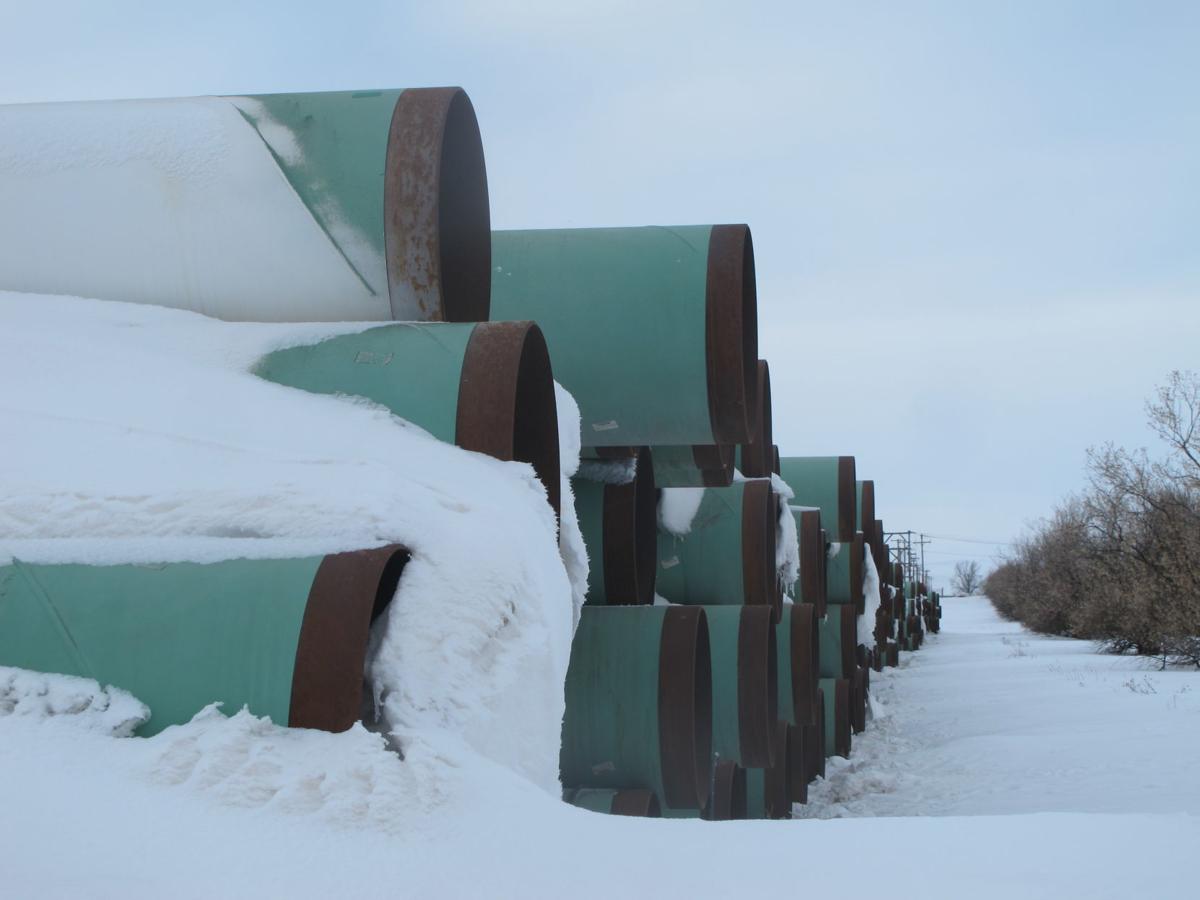 In this January photo, about 230 miles worth of green metal pipe, stored by TransCanada for its stalled Keystone XL pipeline, gathers snow, dust and tumbleweeds in a laydown yard where it's been stored near Gascoyne since 2011. 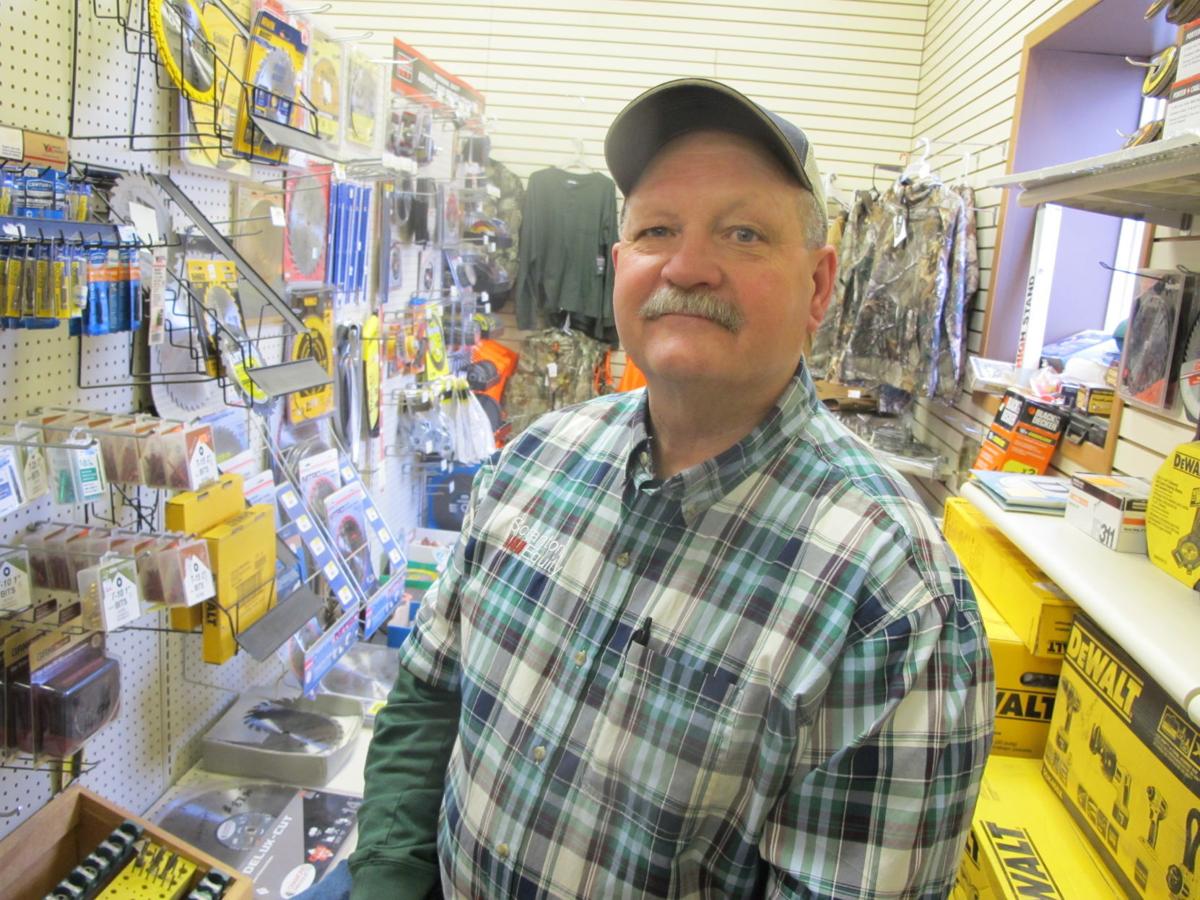 Scranton Equity manager John Truetken said he doesn't expect a lot of fuel business if the mothballed Keystone XL pipeline stored a few miles away is put into service.

GASCOYNE — About 230 miles worth of heavy steel pipe in a vast laydown yard near Gascoyne hasn’t been moved an inch since it was unloaded in 2011. Now, years later, pipe for the abandoned Keystone XL project may be deployed across hundreds of miles.

The green-coated pipe owned by TransCanada was brought in to carry tar sand oil, and the original route out of Alberta just misses the far corner of southwestern North Dakota as it comes down through Montana into South Dakota to connect to the mainline in Kansas.

The pipe is stacked near the BNSF Railway loop between the ghost town of Gascoyne and the busier grain elevator town of Scranton, gathering dust, snow and tumbleweeds. It looked like it would either rust there indefinitely or be sold off after the Obama administration denied a permit two years ago.

It’s a desolate place. Deer paw for food around the edges of the yard, manned by one security guard lonelier than the proverbial Maytag repairman, whose main job  is keeping hunters and trespassers off the property.

Now, with the election of President Donald Trump, the 800,000-barrel project has new life after TransCanada on Thursday submitted a new application at his invitation.

“We welcome TransCanada’s reapplication for a presidential permit to build the Keystone XL Pipeline," said Sen. John Hoeven, R-N.D. "It will create jobs and economic growth, while also making our country safer by helping us to be more energy secure.”

Locals have gotten used to the sight of the massive pipe yard alongside Highway 12 and some even use the word “eyesore” to describe it.

Nearby, Scranton Equity manager John Truetken said he doesn’t expect a lot of business for the fuel and farm services company if the pipe yard is ever activated for construction. He said news that the pipeline could be restarted wasn’t a surprise.

“I figured it would either happen, or they’d haul it out to somewhere else. I don’t know if it will happen that soon,” said Truetken, adding it could generate a little fuel and convenience store business for the co-op, though it didn’t generate much when the pipe came into the yard six years ago.

“But I don’t think it will really have a lot of effect on us,” he said.

In Bowman — about 20 miles west of the pipe yard and 50 miles to where the pipeline would pass close to Baker, Mont. — the town’s mayor Lyn James said she isn’t sure how much impact pipeline construction would have on her community.

She said it could provide some employment for oilfield and oil company service workers, who’ve been laid off in the Bakken boom downturn.

Bowman County is in a longstanding oil production region and pipelines are a common sideline of drilling, while major transport lines have come under scrutiny and protest amid concerns about climate change and environmental consequences.

Bowman County Emergency Management, along with surrounding counties in Montana and South Dakota, started a working plan to deal with any protest after watching one against the Dakota Access Pipeline near the Standing Rock Sioux Reservation, James said.

“Prior to the Dakota Access, we would have never thought it could happen here, but now we don’t know,” James said. “It’s sad that it happens, but it is reality.”

The Keystone XL was also opposed for two years, though on a much smaller scale, in a Native American spirit protest camp in South Dakota that was the basis for the camps near Standing Rock.

South of Bowman, Buffalo, S.D., rancher Bret Clanton said he’s not looking forward to a day when the pipeline cuts through 3 miles of his cattle ranch land. It changes the ground forever and affects the property value, he said.

Threatened with eminent domain, he said he and his neighbors joined to get  the best deal they could with TransCanada in 2007-2008 for a perpetual easement, though it was for far less than Dakota Access paid to build through private property.

“They should build it, or get the h-- out of here," Clanton said. "It’s dragged on and on and on. I never thought it was dead, but a lot of things have changed. There’s not $100 barrel oil anymore and their funding has kind of dried up.”

Clanton said he dreads the day construction comes through his land, along with more than 2 miles of access road, forever changing his ranch.

“I didn’t put it out of my mind; it was a sleeping giant. If I needed a reminder, I’d just drive up to Gascoyne to see that pile of pipe,” he said.

To the east, in Hettinger, economic development director Jim Goplin, said he thinks the resurrection of the Keystone XL will be good for the country’s energy independence, but perhaps not so much for the local economy. He said local unemployment is already very low and available motel rooms are fairly well blocked out.

“Who knows?” Goplin says. “There could be some jobs. But we don’t have a lot of motel rooms and they’re probably not going to drive this far.”

Girl struck and killed in Jamestown by teen driver

JAMESTOWN — Police say a 16-year-old girl was killed after she was struck by a teen driver and pinned underneath a pickup truck in Jamestown.

Early April could be marked by measurable snowfall

The beginning of April could be marked by measurable snowfall in North Dakota, though it appears the Bismarck-Mandan area might escape the bru…

Police say a Missoula man brandished a shotgun toward another man who told him to adhere to social distancing guidelines in a gas station checkout line.

Fleeing motorist drives through fields and onto sidewalks

MINOT, N.D. (AP) — Minot police say a driver has been arrested after leading police on a chase through open fields, sidewalks a retaining wall…

The Bismarck-Mandan area could see 3-5 inches of snow by early Friday, with areas to the east and southeast potentially seeing half a foot, ac…

In this January photo, about 230 miles worth of green metal pipe, stored by TransCanada for its stalled Keystone XL pipeline, gathers snow, dust and tumbleweeds in a laydown yard where it's been stored near Gascoyne since 2011.

Scranton Equity manager John Truetken said he doesn't expect a lot of fuel business if the mothballed Keystone XL pipeline stored a few miles away is put into service. 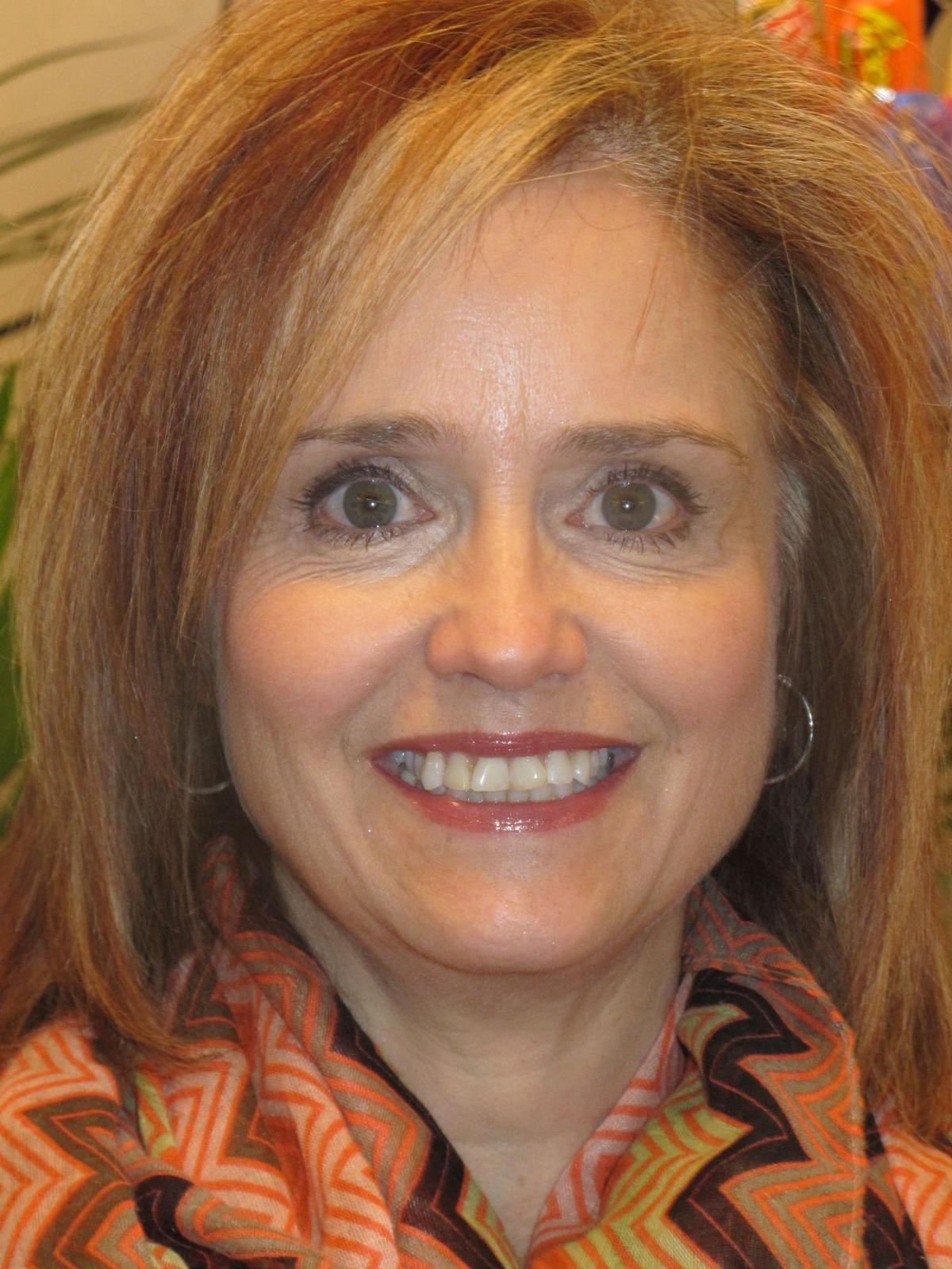 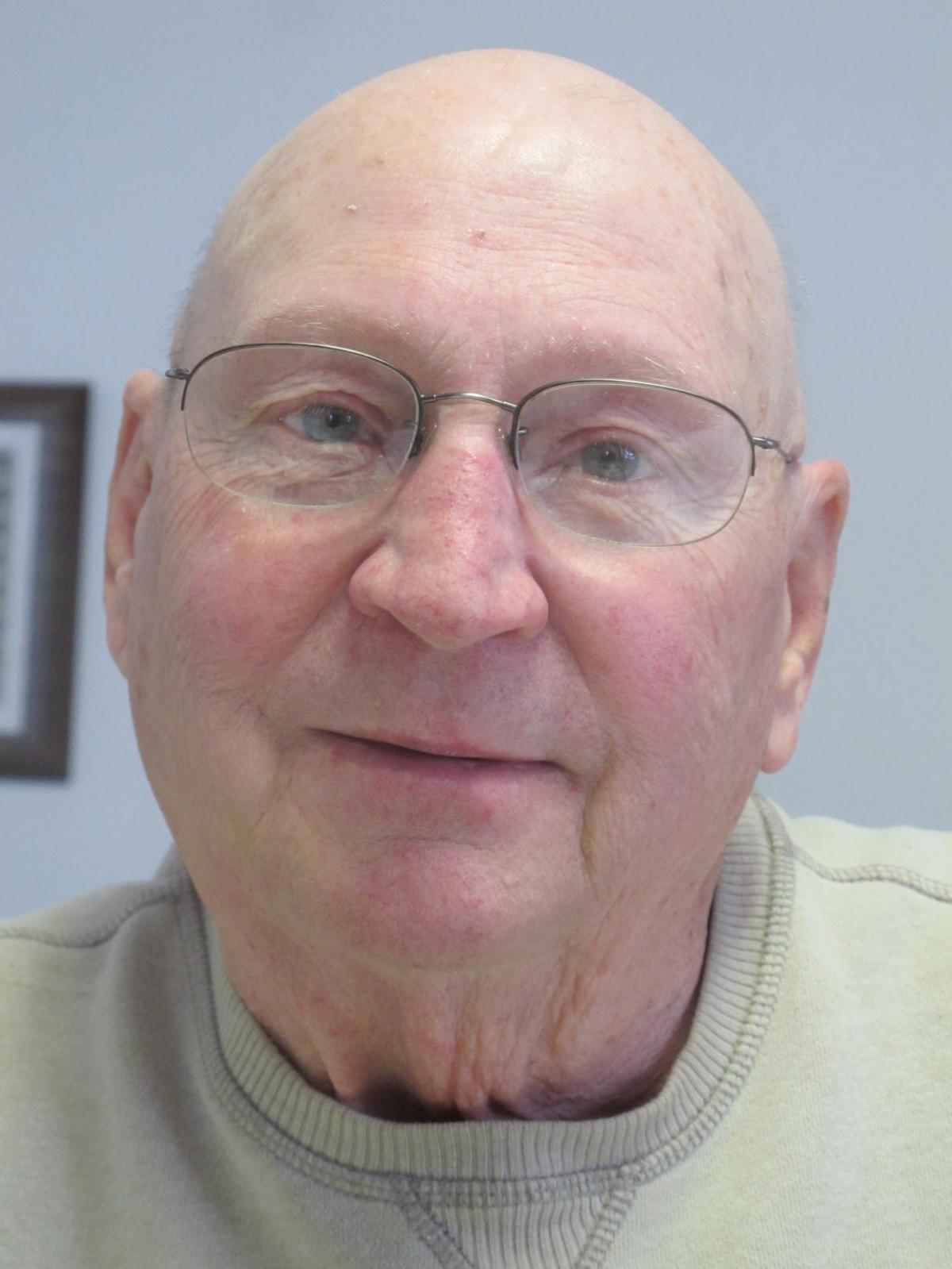 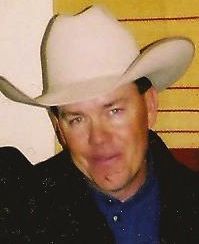