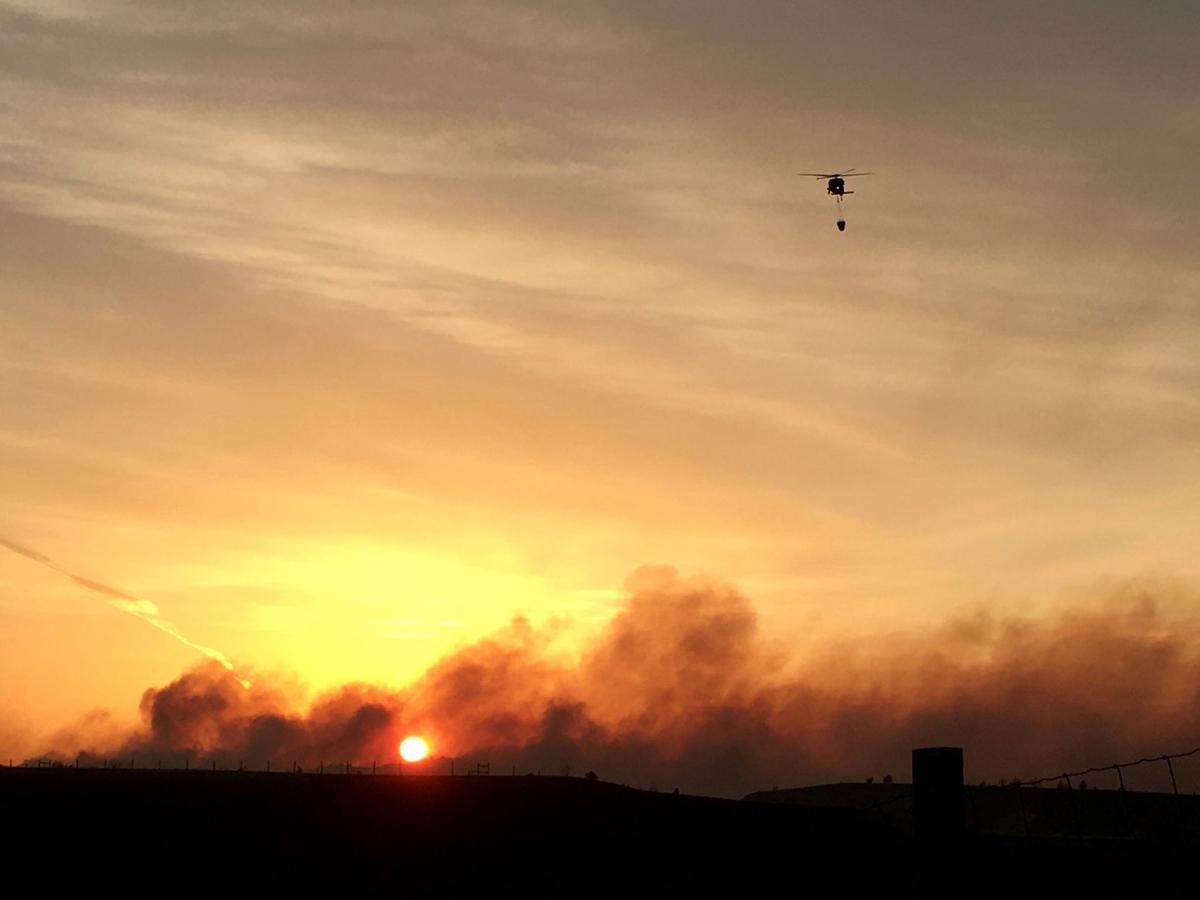 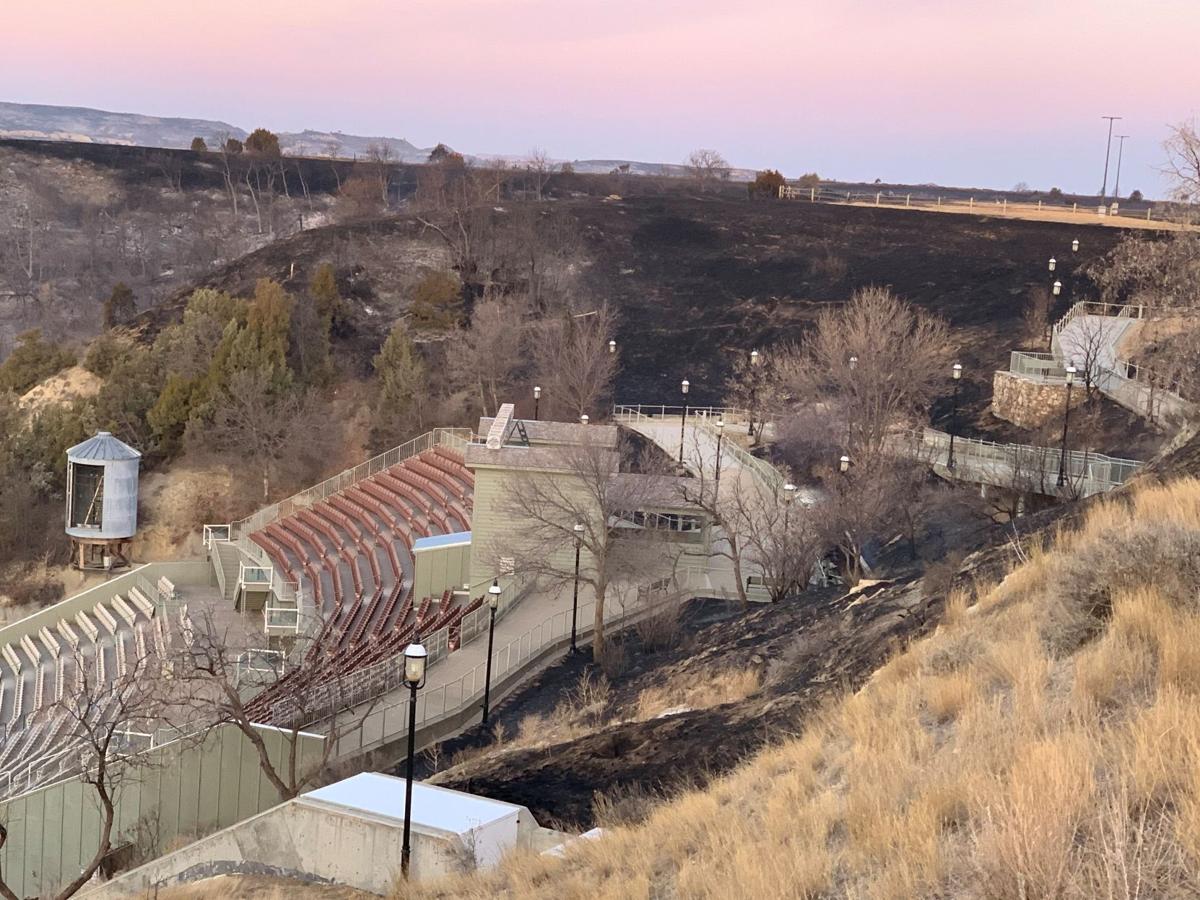 The Burning Hills Amphitheater, home to the Medora Musical, was spared any significant damage from the Medora-area wildfire.

Residents of Medora have been allowed back in their homes after a large wildfire threatened the western North Dakota tourist town but spared it after firefighters scrambled to keep the flames to the west of the community's treasured amphitheater.

Meanwhile, the state Transportation Department reopened a 45-mile stretch of Interstate 94 between Belfield and Beach that was shut down due to the fire threat and resulting smoke.

Authorities early Friday also reduced the estimated size of the fire, from 9,600 acres to 3,000, or from about 15 square miles to about 4 ½. Containment on Friday afternoon was at 50%, with the fire essentially boxed in. Gov. Doug Burgum toured the area Friday.

“If you were going to pick a scenario that was the worst-case scenario, which would be a fire coming at the historic city of Medora, coming at the historic buildings, coming at the amphitheater, that’s exactly what happened, and execution was, I would have to say, perfect, which you don’t often get to say in emergencies,” Burgum said, noting “We ended up yesterday with zero lives lost, zero injuries and zero structures lost.”

An electrical line that sagged and arced started the fire shortly before 1:30 p.m. local time Thursday, a few miles to the southwest of the town, according to Billings County Chief Deputy Maj. Dean Wyckoff. Wind gusting to nearly 30 mph blew the flames toward the community, threatening the Burning Hills Amphitheatre, home to the Medora Musical.

Medora is on the doorstep of Theodore Roosevelt National Park, named for the U.S. president who hunted and ranched in the Badlands. It's a small community of stores and shops with a Western feel. It's also home to the musical that performs all summer.

Wyckoff and U.S. Forest Service spokesman Rob Schilling said firefighters worked the eastern flank of the fire on the west side of the Little Missouri River to save the amphitheater and the Chateau de Mores State Historic Site. They succeeded, though the flames did sweep through the nearby Medora Cemetery.

Authorities notified Medora residents through a reverse-911 phone system, and Medora police also went door to door in the community of about 100 people. Wyckoff said residents were directed to go to the nearby communities of Belfield or Beach.

Wally Owen has lived in the Medora area his whole life and can’t recall a fire comparable to this one.

He is a neighbor to the Burning Hills Amphitheatre, and called 911 when he saw a white plume of smoke in the distance. The Little Missouri River separates his property from the fire, which came within a quarter-mile of his place.

He turned on his water sprinklers and began hosing his house and moved his horses out. He also left gates open in case firefighters needed to access his property, which wasn't damaged.

“I could smell the breath of the dragon,” Owen said. “That’s how close I was.”

The fire continued to burn into the evening, and authorities shut down the stretch of I-94. Smoke could be seen from miles away. Burgum, who earlier on Thursday had put the National Guard on standby to help fight wildfires if needed, declared a statewide wildfire emergency, enabling the Guard to send two Black Hawk helicopters with water buckets to help fight the Billings County blaze. Numerous other local, state and federal agencies also responded.

The state Department of Emergency Services on Thursday requested a temporary flight restriction from the Federal Aviation Administration to allow the Guard helicopters and also aircraft with the U.S. Forest Service and North Dakota Civil Air Patrol to battle the Medora fire. The restriction will remain in place within a radius of 10 nautical miles of Medora until 6 p.m. local time April 8.

Crews stopped the forward progress of the flames late Thursday. The interstate reopened about 8:45 p.m. local time. Residents were allowed back home about 15 minutes later, according to Beth Hill, acting outreach and education manager for the North Dakota Forest Service.

There were no immediate reports of any serious injuries to people, or of any livestock injuries or losses. The Arnegard Fire Protection District said in a Facebook post that there were a few minor injuries. One of its firefighters received medical assistance after debris got in his eye.

"Life is very fragile. Fires remind us of that truth," said Roger Dieterle, a retired pastor who lives south of Medora. "This will be one April Fool's Day and Holy Thursday that will stick deeply in all of our souls."

Theodore Roosevelt National Park Superintendent Wendy Ross said the terrain is one that handles fire well. Even though the landscape was a devastated black on Friday, in a couple of weeks “We will see green again here,” she said. “The vegetation will return. So that is a message of hope.”

The Burning Hills Amphitheatre was spared any significant damage, though the fire encroached all the way up to concrete portions of the facility, according to Theodore Roosevelt Medora Foundation Chief Marketing Officer Justin Fisk.

“There was burn that took place along the entry walking path, but from our view, everything is structurally sound, intact, nothing is melted,” he said Friday. “We’ll be reevaluating throughout the week to make sure everything is still in good condition, but it looks like the fire stopped right at the edge of the theater and burned its way across the west side of the parking lot and a little further north.”

It’s unclear whether the property suffered any smoke damage, “but it doesn’t look like anything substantial," Fisk said.

No other foundation properties had structural damage from the fire. Some fencing will have to be redone in pasture areas near the theater, Fisk said.

The amphitheater is still closed for the winter, with lighting and sound equipment tucked away. Auditions for the Medora Musical are about a month away, roughly the same time the theater is opened up. The summer show begins its season June 9.

The popular Maah Daah Hey Trail runs through the Badlands west and south of Medora near the amphitheater, but it's unlikely the fire caused much damage given that the trail is narrow and made of dirt, said Phil Helfrich, president of the nonprofit Save the Maah Daah Hey. Wooden posts with a symbol of a turtle mark the trail's route through the rough and scenic terrain, and it's possible some will need to be replaced if they burned, he said.

The fire occurred on Medora’s 138th birthday. The Marquis de Morès founded the town on April 1, 1883, and named it after his wife, according to the National Park Service. He later started a meatpacking plant, but the venture failed. The plant’s chimney still stands, and the site is listed on the National Register of Historic Places.

The Medora area also is the planned site for a Theodore Roosevelt Presidential Library. The foundation organizing the project issued a statement Friday thanking the firefighters and others who responded to the blaze.

“Prayers were answered and the beloved community of Medora is safe,” said Linda Pancratz, chair of the library foundation and a trustee of the Theodore Roosevelt Medora Foundation.

Ken Vein, director of design and construction for the library and a veteran of the 1997 Grand Forks flood, was on site in Medora to assess the impact to the land intended for the library. Representatives of Snohetta, the design architect selected for the project, architect of record JLG, civil engineers and ecologists are expected to join the effort in the coming days.

All of North Dakota is in some form of drought, with extreme drought covering almost all of the west, according to the latest U.S. Drought Monitor map, posted Thursday. That has elevated the wildfire danger, with nearly all of the west considered at “very high” risk.

Wildfires have burned more than 30,000 acres in North Dakota already this spring, compared with fewer than 10,000 all of last year. Nearly all counties have implemented some form of outdoors burning restrictions.

A weather service red flag warning for critical fire weather conditions remained in effect Friday for much of the western two-thirds of North Dakota, with low humidity and gusty winds persisting across the region. The state forecast doesn't call for a chance of rain until Tuesday.

Omar asks for just policing in wake of Wright's death

Omar asks for just policing in wake of Wright's death

A wildfire threatened the western North Dakota tourist town of Medora on Thursday, and authorities ordered the 100 residents to evacuate.

A wildfire that has shut down the North Unit of Theodore Roosevelt National Park tripled in size on Easter.

A wildfire blazing in the North Unit of Theodore Roosevelt National Park has grown to nearly 8 square miles, but fire crews have made progress…

A sprawling wildfire in the North Unit of Theodore Roosevelt National Park is now 50% contained and has not spread outside of an 8-square-mile area.

The Burning Hills Amphitheater, home to the Medora Musical, was spared any significant damage from the Medora-area wildfire.