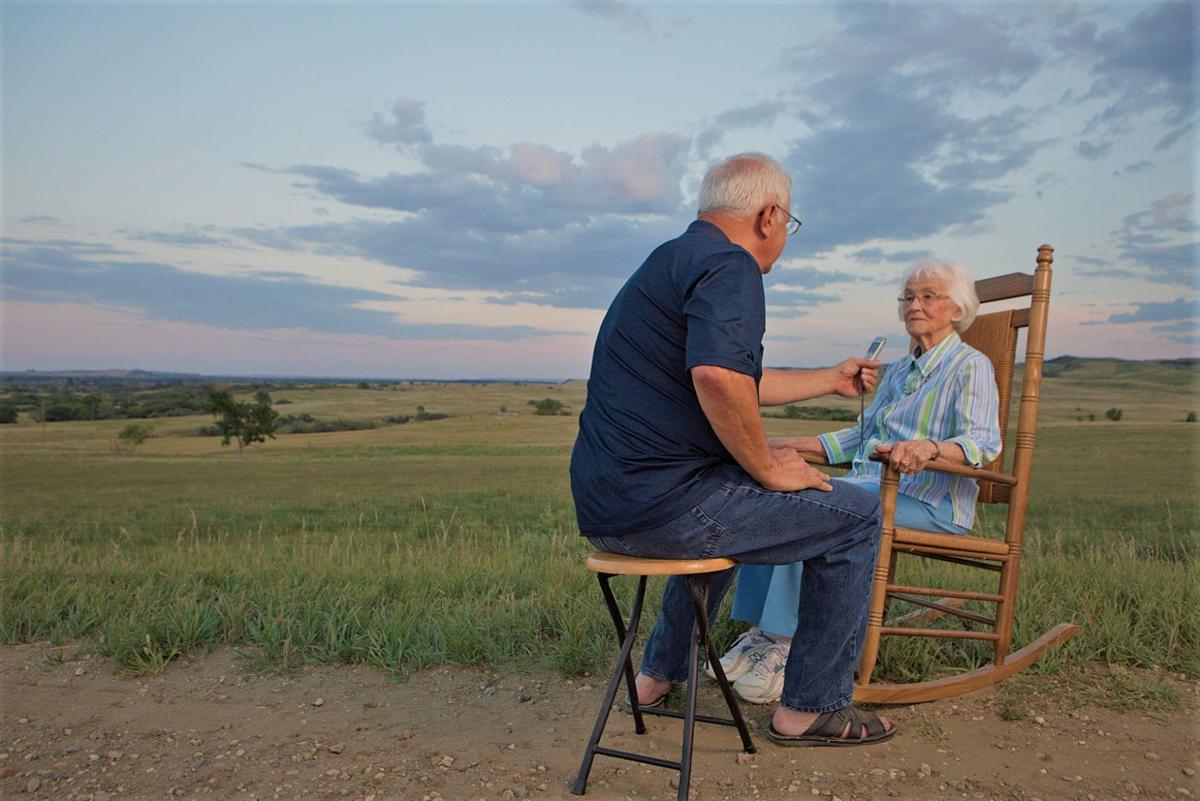 Jim Puppe interviewing Pauline Roll, of Heil, in Grant County. Roll gave birth to 21 children in 21 years. She's one of the subjects in Puppe's book, "Dakota Attitude: Interviews from Every Town in North Dakota." 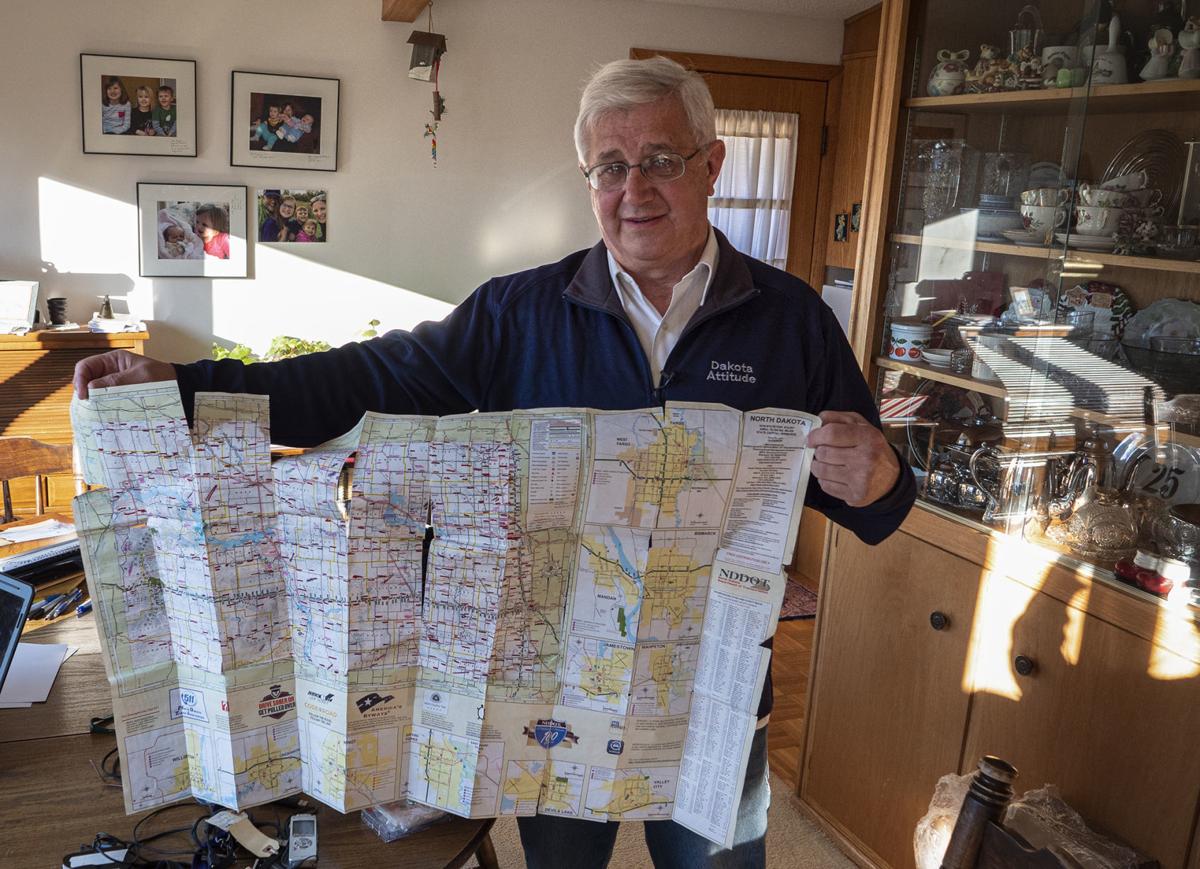 Jim Puppe holds the North Dakota map he used to visit 617 cities and towns in North Dakota. Puppe interviewed people in each town he visited and wrote a book about it called "Dakota Attitude." 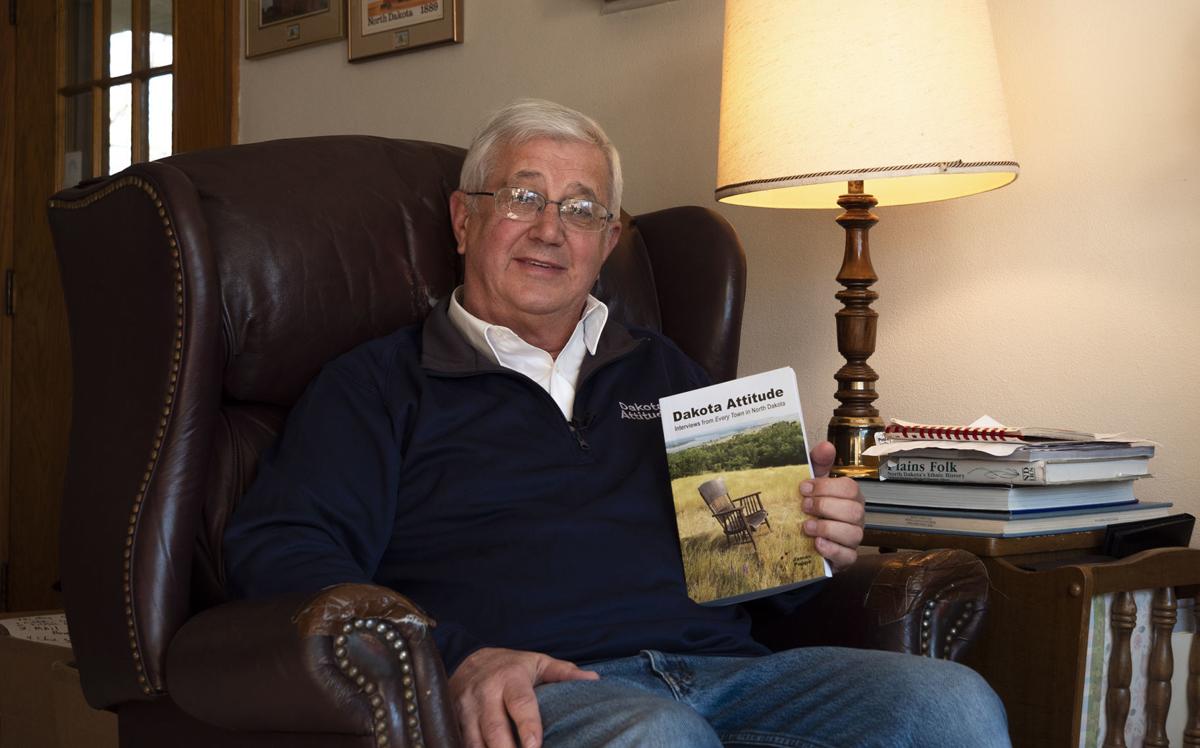 Jim Puppe, of Fargo, is the author of "Dakota Attitude."

FARGO — Jim Puppe spent more than a decade driving to every corner of North Dakota. He logged 113,877 miles on his Dodge van, often sleeping in his rig and at times subsisting on peanut butter and jelly sandwiches.

His mission took him to every town in the state. All 617 spots on the map, Abercrombie to Zeeland. And from every town he collected a story, the acquired bits of wisdom of interviewees who ranged in age from 60 to 105 years.

The Fargo man's focus on those who were gray and wrinkled was deliberate. He wanted to talk to people who stood on the hilltop of years and could speak from the wide perspective gained as dusk was approaching.

“There’s a lot of wisdom out there,” he said. “What I got is priceless.”

It took Puppe, now 74, 11 years to capture their stories. The result is a new book, “Dakota Attitude: Interviews from Every Town in North Dakota.”

Puppe took off, armed with a digital recorder, notebook and camera. It struck him as a perfect retirement project. Upon arriving in a town, he looked for a gathering spot, such as a cafe, and inquired about interesting people to write about.

“He needs something to work on,” said Sharon Puppe, Jim’s wife of 47 years. She accompanied him on some of the road trips, including visits to the area around Hensel, in the northeast corner, where Jim is from, and around Strasburg, in south-central North Dakota, where she grew up.

“I knew he would enjoy it,” she said. “He’s always moving. He doesn’t do things in moderation.”

The fieldwork was the fun part of Puppe’s labors. “I had to learn how to be a good listener,” he said.

Some towns were no longer inhabited, so he searched for former residents.

“Some of these towns there was nobody there, nobody at all,” Puppe said. In many rural towns, the schools were lonely and abandoned. “But how many kids went through that school and got a good education?” he asked.

Once finished, he had to condense his interview transcripts, which ran 10 to 25 pages each, into 350-word vignettes, a task he found challenging.

He consciously avoided writing about general history or geography; his concern was strictly personal history.

“Someone said we know more about the soil than we know about the people,” Puppe said.

He spoke to farmers and ranchers, teachers, postal workers and shopkeepers. Many were military veterans, like Puppe, who served in Vietnam. He came away with stories about immigration, homesteading, school days, courtship, family and community life.

He tells the story of Pauline Roll, of Heil, in Grant County, a mother who had 21 children in 21 years and who considers big families a blessing.

“I’d never be without a family,” she told Puppe.

In Regent, he spoke with James and Marie Gion. James’ father was one of four brothers who married four sisters. The farming couple raised 13 children.

“That was the only crop that came through,” Marie joked.

Jerry Hanson, of Hannaford, was a sailor aboard the USS Hornet, which picked up one of the first Apollo space flight crews, then served in Vietnam on a flotilla on the Mekong Delta. He came back to the family farm after the war. A widower, he goes to the bowling alley every morning for coffee.

Helen Landman, of Larimore, eloped at age 17 to Crookston, Minn., where she lied about her age and was married the same afternoon to Keith Welte. They raised eight kids. Her advice: “To thine own self be true, and then thou canst be false to any man.”

Melvin Leland, who ranches near Squaw Gap in McKenzie County, attended grade school in a bunkhouse. Telephone service didn’t arrive until 1971. His mother joked that they could watch the moon landing on television but couldn’t phone a neighbor.

Stan Wright can often be heard at the funerals of veterans around Stanley. He served in the Korean War, where he played in an infantry band. As of 2012, when Puppe interviewed him, Wright estimated he’d played taps on his trombone at 800 to 900 funerals.

“The taps. That is a tear jerker for everybody,” he told Puppe. “I hope that someday someone plays taps for me.”

Many of those Puppe spoke to lacked formal education, but he said they had valuable lessons to pass along.

“I cried with them, and I laughed with them,” he said. He felt a great responsibility to faithfully summarize their stories. “They must reflect what the person’s story was about.”

As he was collecting his stories, Puppe was acutely aware that the subjects were slipping away. He estimates that more than a third of those he interviewed have since died.

“But we have their stories,” he said. “It’s been gratifying. It’s been a privilege. It’s a tribute to my friends and neighbors and fellow North Dakotans. It’s their story.”

“Dakota Attitude” is available at the North Dakota State University bookstore and can be ordered online at https://www.dakotaattitude.com/.

A longtime weekly newspaper in one of North Dakota's oldest towns will close after printing its last edition this week.

Measurable snow in forecast for start of workweek

The start of the workweek will be marked by a return to winter.

A 38-year-old Mandaree man has been sentenced to serve 40 years in prison for sexually abusing children under the age of 12.

PIERRE, S.D. — Louise Aamot Charbonneau couldn't make her annual trip to the South Dakota Legislature this year to confront lawmakers with her…

ND American Indian tribes have formed a coalition to address the rise of electronic pull tabs that are competing for wagers at their casinos.

Bismarck woman sentenced to probation in death of infant son

BISMARCK, N.D. (AP) — A 20-year-old Bismarck woman charged with felony child neglect following the death of her baby has been sentenced to two…

Jim Puppe interviewing Pauline Roll, of Heil, in Grant County. Roll gave birth to 21 children in 21 years. She's one of the subjects in Puppe's book, "Dakota Attitude: Interviews from Every Town in North Dakota."

Jim Puppe holds the North Dakota map he used to visit 617 cities and towns in North Dakota. Puppe interviewed people in each town he visited and wrote a book about it called "Dakota Attitude."

Jim Puppe, of Fargo, is the author of "Dakota Attitude."