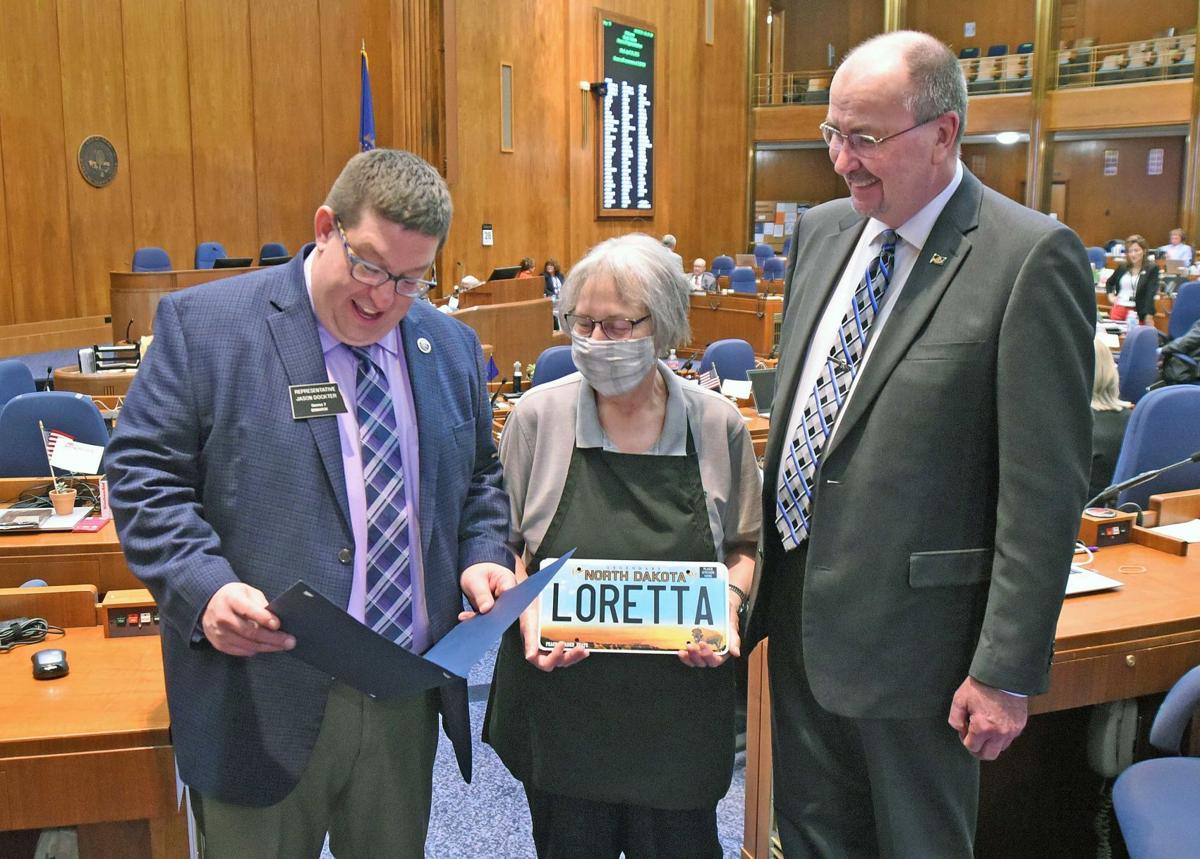 Loretta Boehm, center, was recognized for 50 years of service in the North Dakota Capitol Cafe during a Wednesday ceremony in the House chamber. At left, Rep. Jason Dockter, R-Bismarck, reads a proclamation from Gov. Doug Burgum with House Majority Leader Rep. Chet Pollert, R-Carrington, looking on. 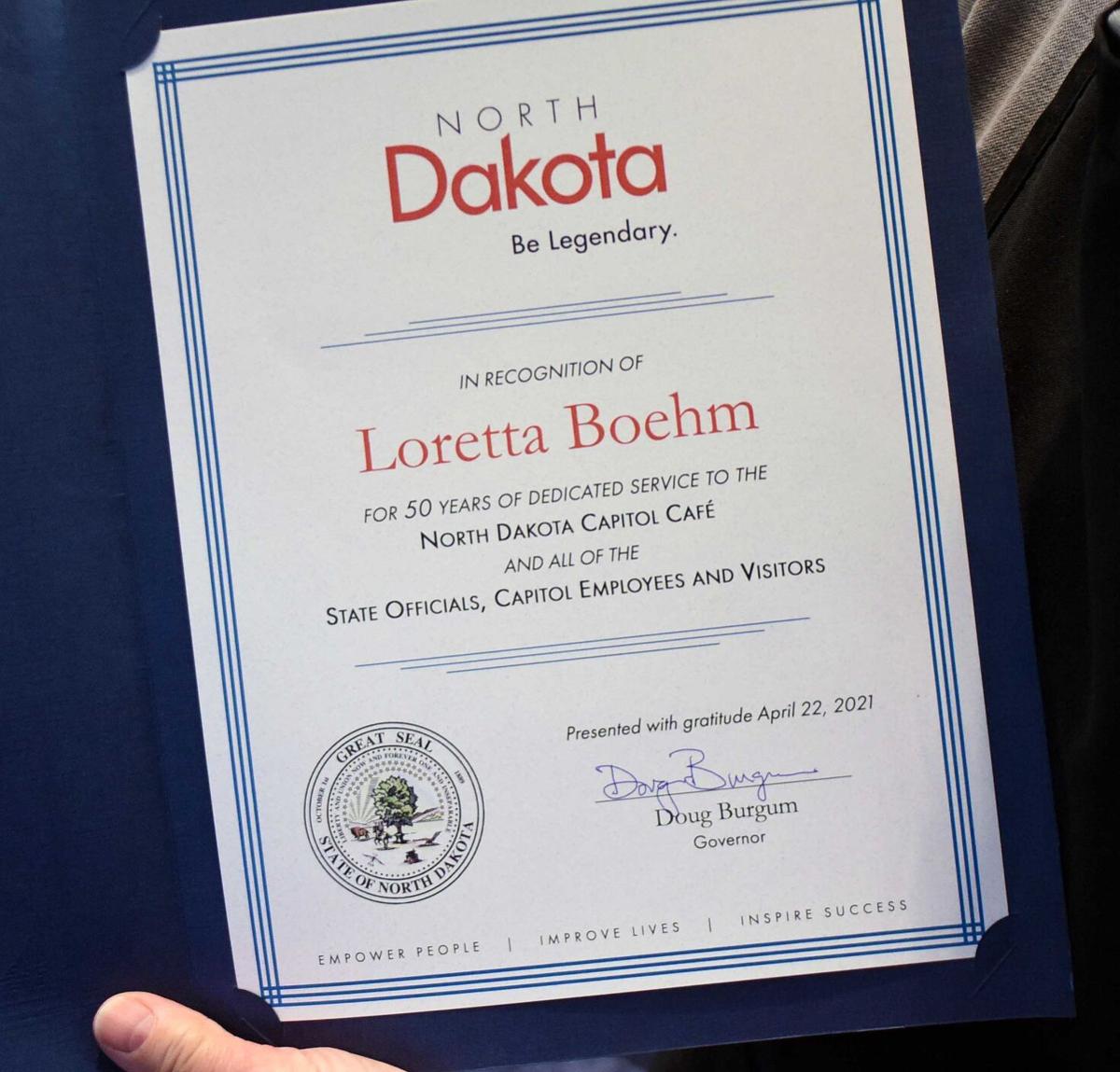 The proclamation from Gov. Doug Burgum recognizing Loretta Boehm for 50 years of service at the North Dakota Capitol Cafe.

North Dakota legislators before adjourning last week took time to honor a Bismarck woman who has helped feed state officials for more than half a century.

Loretta Boehm, who has worked at the Capitol Cafe since 1969, is retiring soon. During the House afternoon floor session on Wednesday, she was presented with a governor’s proclamation stating “In recognition of Loretta Boehm, for 50 years of dedicated service to the Capital Cafe and all of the state officials, Capitol employees and visitors.”

The governor also wrote Boehm a letter “well deserved for her incredible career that she’s had here” and gave her a coin from ones he had personally made that recognizes the values of courage, curiosity, humility and gratitude. He also gave her a stone with the word “gratitude” on it.

“She’s a familiar face and a friendly, smiling face for decades and decades here,” Burgum told the Tribune.

Boehm received a round of applause and a standing ovation from lawmakers, along with cards and money gifts from legislators and lobbyists to help her in retirement.

“I think everyone in this room probably contributed,” said Rep. Jason Dockter, R-Bismarck, who oversaw the brief ceremony.

“You’ve touched so many lives. Everyone here always has Loretta stories,” Docktor said. He offered as an example:

“There’s a line of six people in Loretta’s line, and there’s one with three in the other line. They’ll go in the line with six, because they know you’ll get it done faster than the other person with three.”

State Transportation Department Director Bill Panos presented Boehm with a North Dakota license plate that reads “Loretta” -- for display, since she doesn’t own a car.

Speaker Kim Koppelman, R-West Fargo, gave Boehm the opportunity to speak. She declined, but acknowledged the assembly with a smile and a nod of her head.

Boehm, who grew up in McClusky, told the Tribune that when she started at the Capitol, big-selling items in the cafe were "candy, cigarettes and cigars."

She said work in the cafe has been enjoyable -- including the perk of "no evenings, no weekends and all the holidays" -- and she plans to continue for another year and a half.

Dockter is related to Boehm -- his mother is her first cousin.

“We want just to thank you for your hard work,” he said. “Every day you do your work, you do it hard, you’re always pleasant, and you always remind me if I make mistakes you’ll let my mother know. So I make sure to be on my best behavior.”

Loretta Boehm, center, was recognized for 50 years of service in the North Dakota Capitol Cafe during a Wednesday ceremony in the House chamber. At left, Rep. Jason Dockter, R-Bismarck, reads a proclamation from Gov. Doug Burgum with House Majority Leader Rep. Chet Pollert, R-Carrington, looking on.

The proclamation from Gov. Doug Burgum recognizing Loretta Boehm for 50 years of service at the North Dakota Capitol Cafe.