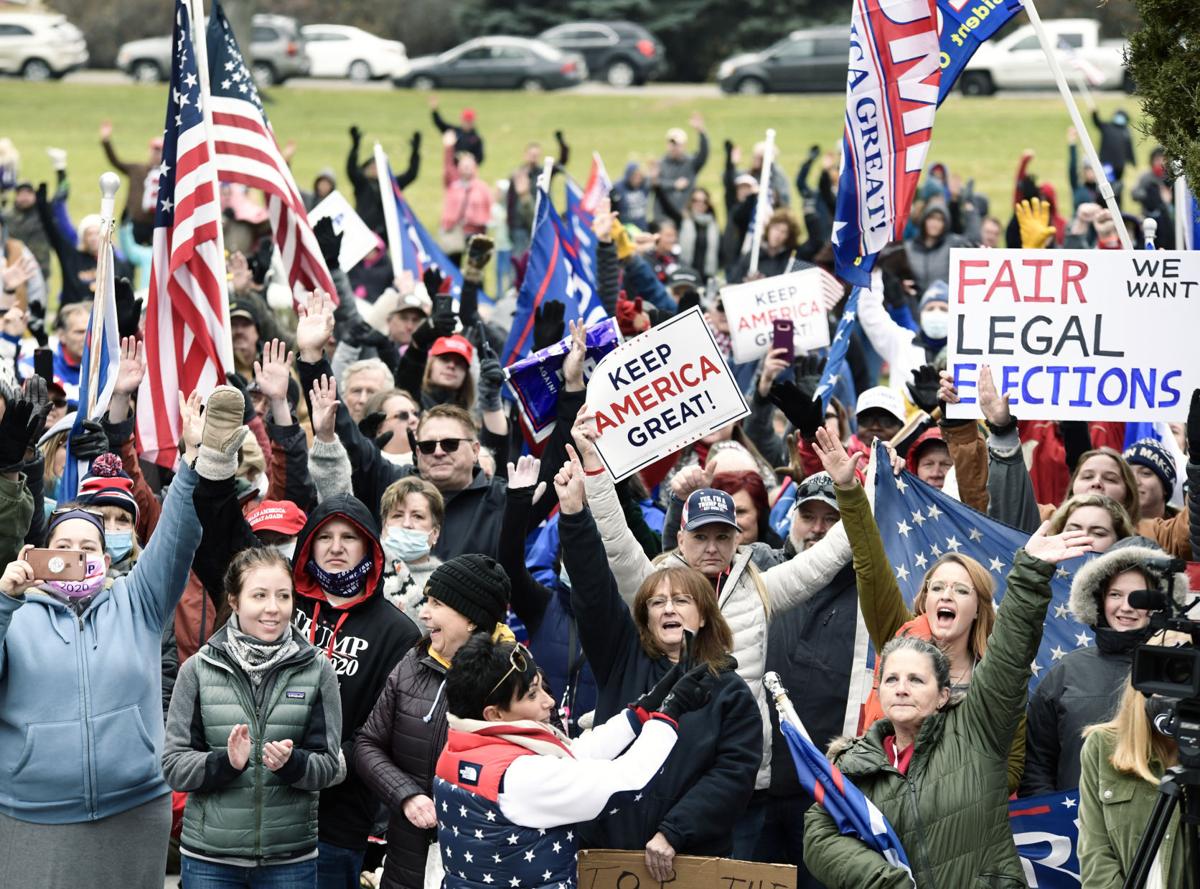 A few hundred supporters of President Donald Trump gathered at the steps of North Dakota State Library on the Capitol grounds in Bismarck on Saturday. 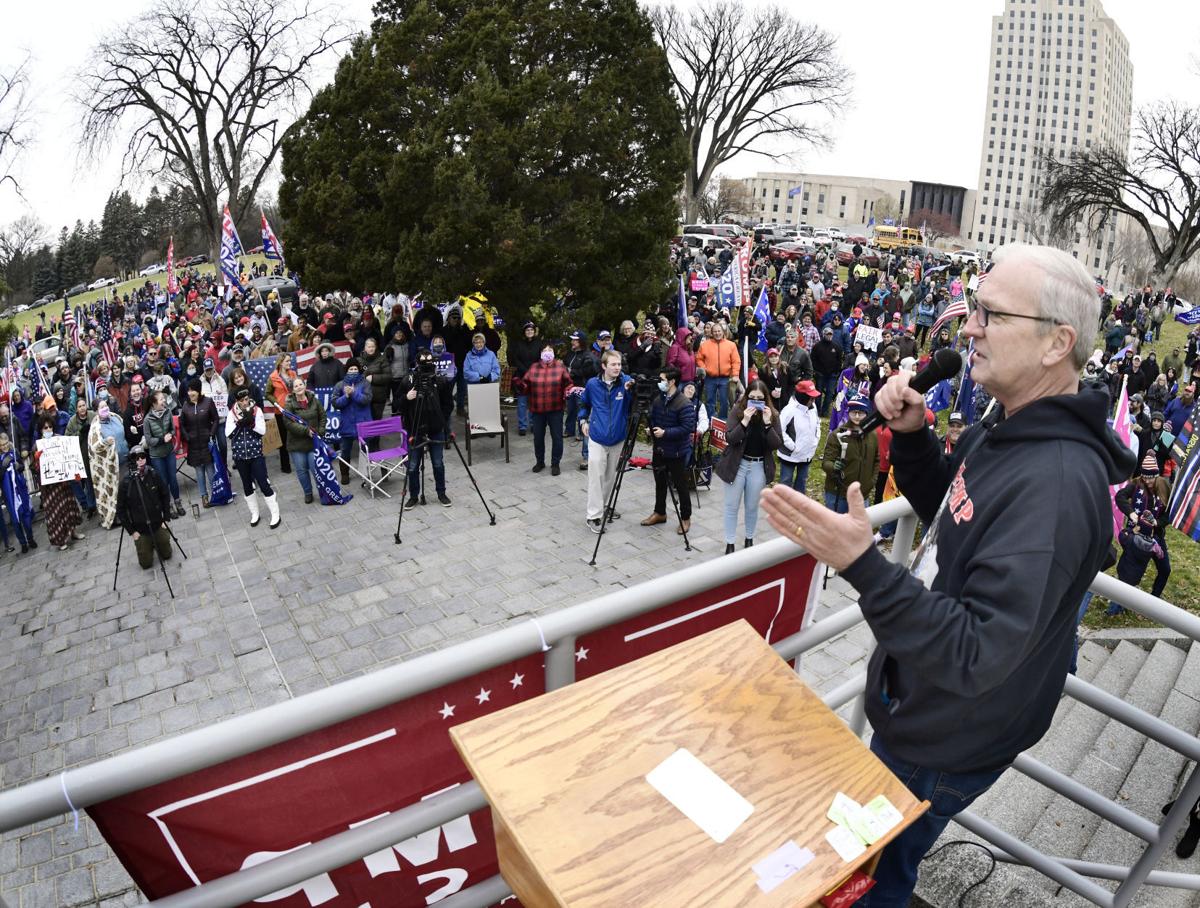 U.S. Sen. Kevin Cramer, R-N.D., speaks to the hundreds of President Trump supporters on the steps of the North Dakota State Library on the state Capitol grounds in Bismarck on Saturday.

Amelia Miller, who attended the rally, said she was at the event because she wants Trump to be the president for the next four years and said she had concerns about election results in other states.

"I would like to see a recount," Miller said. "I would even go back and revote so we know it's legal."

The Associated Press declared Joe Biden the winner of the 2020 election Saturday morning after declaring that the former vice president won Pennsylvania. Trump received 65% of the vote in North Dakota.

Organizer Jared Hendrix said the goal of the rally was to show solidarity with Trump and to "underscore the importance of election integrity."

"There's a lot of questions about irregularities and potential fraud," Hendrix said. "I recognize that some of the things going around are probably bogus, but I realize there are also a lot of legitimate questions. Even if you support Biden and you think he's won, wouldn't you want that to be a legitimate win?"

Trump and his campaign have made claims of voter fraud or election interference that have been largely unsubstantiated. Election observers in Michigan and Pennsylvania were not prevented from watching ballots being counted, and in Pennsylvania, the state Supreme Court ruled mail-in ballots post marked Nov. 3 but received up to three days after Election Day can be counted.

During the rally, Hendrix read from Trump's statement released after national media outlets called the election for Biden, drawing cheers from the crowd after a line about the election not being over.

Gallion said he was thankful North Dakota does not have the same problem with elections that the rest of the country seem to have and advocated for "every legal vote" to be counted.

U.S. Sen. John Hoeven touted things Trump has done for the state since 2016, including approving the Dakota Access Pipeline, supporting farmers and supporting law enforcement and the military. Hoeven also said the rally was to make sure there is "an open and transparent process" regarding the election.

U.S. Sen. Kevin Cramer, who was wearing a Trump 2020 sweatshirt, criticized national media coverage of Trump and election administration in Milwaukee, Atlanta, Detroit and Philadelphia because they are run by Democrats.

"What the pundits and pollsters and everybody has never figured out is that the president awoke something in people all across the state of North Dakota, all across the country," Armstrong said.

A small group of counter protesters with Black Lives Matter signs approached the podium during speeches and were met with rally-goers who tried to block them from view by standing in front of them or holding up flags. A skirmish broke out in the middle of Armstrong's speech after a counter protester attempted to perform a citizen's arrest on a rally attendee. North Dakota Highway Patrol troopers responded, but no one was arrested.

Hendrix said after the rally that even if Biden is declared the president, he hopes the movement Trump started carries on.

"I want to see that continue on the same issues: on America first, on cutting taxes, cutting regulations, putting patriotism back in our schools."

The North Dakota Democratic-NPL Party released a statement just before the rally congratulating Biden on his win and condemning Hoeven, Cramer and Armstrong for attending the rally.

"Their blatant disregard for the constitutional right of every American to make their voice heard at the ballot box is dastardly at worst and cowardly at best," the statement read.

North Dakota's congressional delegation has denounced the violent occupation of the U.S. Capitol by supporters of President Donald Trump; Democrats are critical of past GOP actions.

About 200 people gathered on the steps of the state Capitol in Bismarck on Wednesday to show their support for Republican President Donald Trump.

A few hundred supporters of President Donald Trump gathered at the steps of North Dakota State Library on the Capitol grounds in Bismarck on Saturday.

U.S. Sen. Kevin Cramer, R-N.D., speaks to the hundreds of President Trump supporters on the steps of the North Dakota State Library on the state Capitol grounds in Bismarck on Saturday.