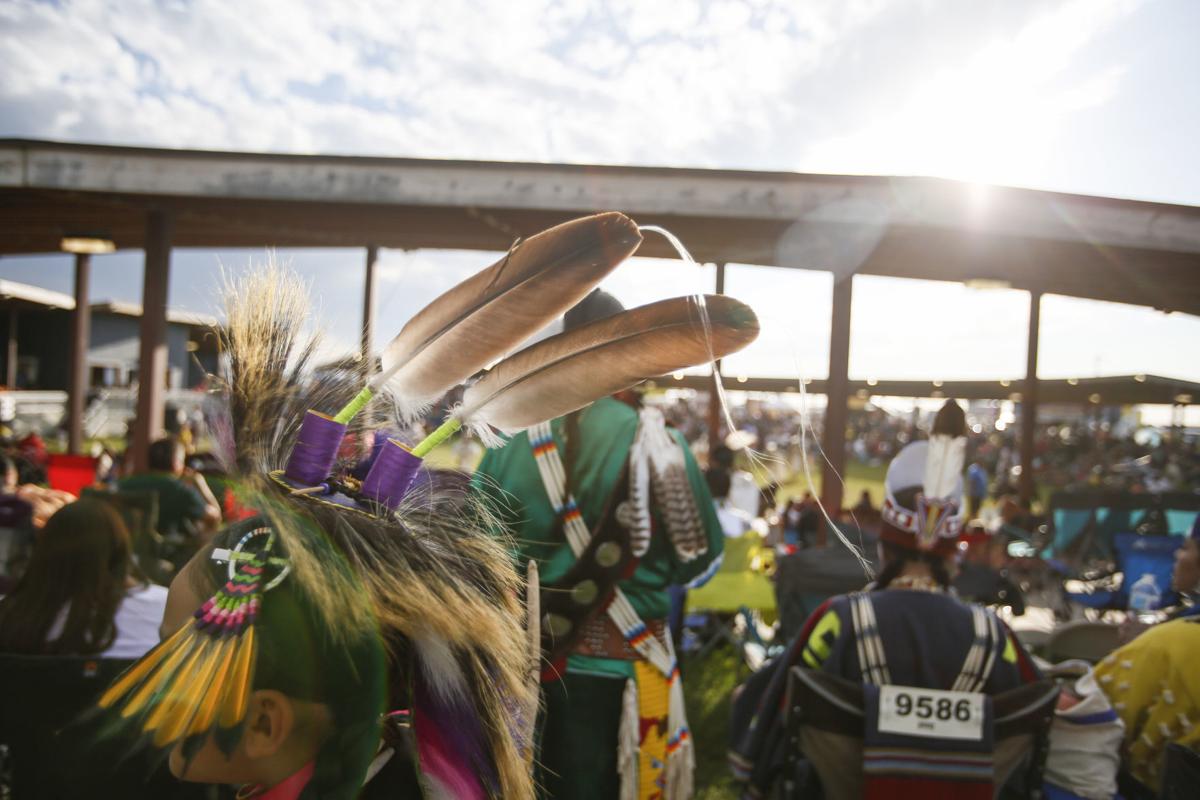 Feather regalia is seen during the Mandaree Hidatsa Powwow July 19 in Mandaree. 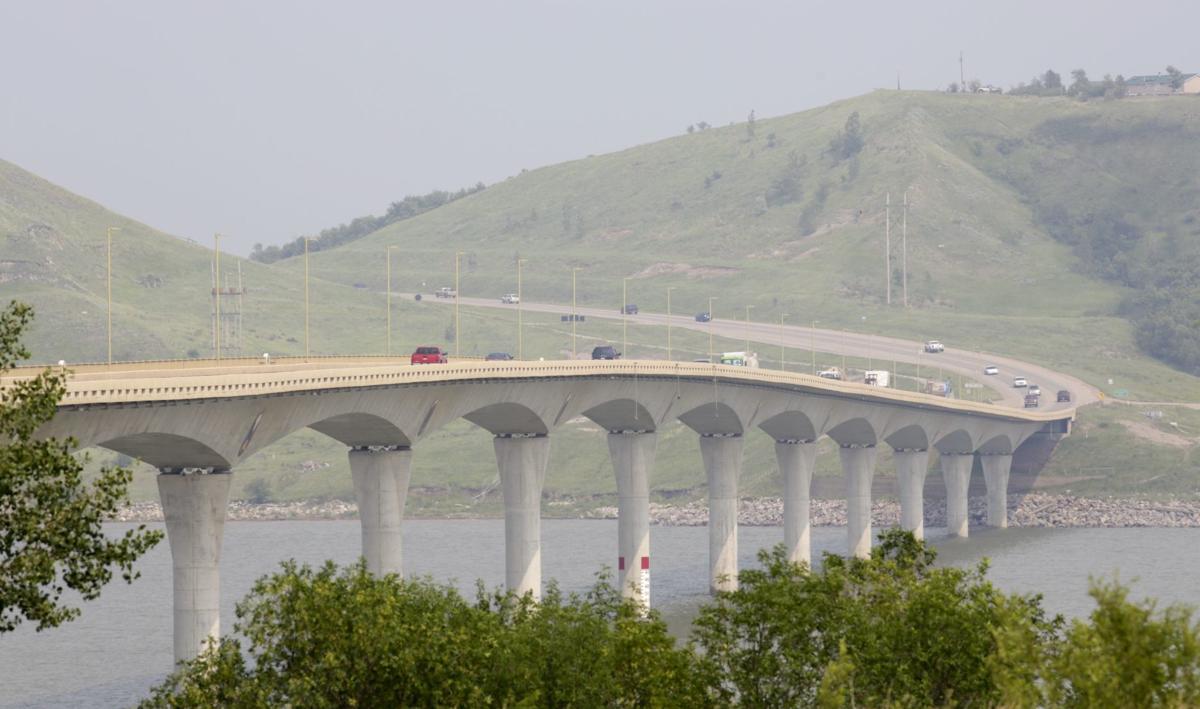 FORT BERTHOLD — In western North Dakota, on a nearly 1,000,000 acre tract of land, sits the Fort Berthold Reservation, where the Mandan, Hidatsa and Arikara tribes once united after devastating epidemics of smallpox.

Often referred to as the “Three Affiliated Tribes,” the Mandan, Hidatsa and Arikara, all have their own creation stories, cultures and traditions. But they all believe their presence in North America is “from the beginning of time,” according to text published by the North Dakota Department of Public Instruction and the history published on the nation’s website.

Historians recorded the Mandan with the Hidatsa as the first to occupy the Missouri River area, with the Arikara moving up later. The Mandan, who call themselves the “people of the first man,” have two origin theories. One version indicates they migrated from the Mississippi River area, through northern Iowa to the plains of South Dakota, and the other is that they originated in the area south of what is now Mandan, North Dakota.

In 1738, the Mandan numbered about 15,000. According to the earliest historical accounts, the tribe, which included five bands, was firmly established in stationary villages near the Heart River, in present-day North Dakota. The Mandan practiced agriculture, and they created a focal point of trade on the Missouri River. The goods they produced were necessities to other tribes.

The Hidatsa moved from central Minnesota to the eastern part of North Dakota near Devils Lake and eventually joined the Mandan at the Missouri River around 1600 AD. The Mandan said the Hidatsa were a “wandering people whom they taught to build stationary villages and to raise corn, pumpkin and other vegetables and who soon moved up to the Knife River.”

The Hidatsa, which separated from the Crow Tribe, were split into three village groups, the Hidatsa Proper, the largest one, as well as the Awatixa and the Awaxawi.

The Arikara, also known as the Sahnish, once lived in an area extending from the Gulf of Mexico and migrated through Kansas, Nebraska and South Dakota. Their movements were not random, but a directive given to them by Neesaau ti naacitakUx, Chief Above, through an ancient tradition and from a sacred being called "Mother Corn."

Smallpox epidemics of 1792, 1836 and 1837 devastated the tribes’ populations, and the Mandan, Hidatsa and Arikara combined forces for protection as well as economic and social survival. Though now affiliated, they each maintained their own ceremonies, clan systems and cultural identities.

“The three tribes lived in earth lodges, were farmers, hunted wild game and relied heavily on the buffalo for food, shelter, clothing, and animal pans for making various utensils and garden tools,” according to the MHA Nation website. “They maintained a vast trading system and were considered middlemen by neighboring tribes with different types of trade products.”

The territory of the Mandan Hidatsa Arikara Nation, or MHA, wasn’t officially established by the U.S. government until the 1851 Treaty at Fort Laramie. And even after that, the tribal nation’s land base continued to shrink through federal government action.

The Treaty at Fort Laramie brought more than 10,000 Indigenous people from the Lakota, Cheyenne, Arapaho, Crow, Mandan, Hidatsa, Arikara and Assiniboine nations. There, the boundaries for the Three Affiliated Tribes’ territory were set for the first time. It started at the mouth of the Heart River in present-day North Dakota, traveled up the Missouri River to the mouth of the Yellowstone River and followed that waterway southwest through present-day Montana and a part of Wyoming.

As part of the treaty, the tribes would also allow the U.S. government to lay roads and build military forts in Indian Country in exchange for $50,000 a year for 50 years. Later, without tribal approval, Congress amended the treaty to just 10 years.

Then in 1870, an executive order officially established the Fort Berthold Reservation for the Three Affiliated Tribes, but the government took off the southern boundary of the territory established in 1851 because the Sioux laid claim to it a year earlier.

When the Northern Pacific Railroad was chartered, it was granted right-of-way 40 miles on either side of the proposed line. When construction of the railroad reached the Mandan Hidatsa Arikara Nation in 1879, the railroad company drew up a resolution to reduce the Fort Berthold Reservation.

In 1880, an executive order took all the land south of the line 40 miles above the Northern Pacific Railroad from MHA Nation.

The U.S. government had reduced MHA’s more than 12 million-acre territory to just a tenth of its original size. The government eventually compensated the tribes in 1930, awarding them more than $2 million for land taken in 1870 and 1880.

That wasn’t the last land cession made, though. Shortly after, MHA Nation signed away 1.6 million acres of land to white settlers during the allotment era.

And in the Flood Control Act of 1944, the tribe lost another 152,360 acres to the Garrison Dam, which flooded the thriving village of Elbowoods, among others. Tribal members today still refer to the act as the “Great Flood.”

Note: In honor of Native American Heritage Month, The Forum will publish a weekly piece on the histories of the five tribal nations that reside within North Dakota: Spirit Lake, Sisseton-Wahpeton Oyate, Turtle Mountain Band of Chippewa, Standing Rock Sioux, and the Mandan Hidatsa Arikara nations.

The histories of these nations have been gathered from texts printed by the North Dakota Department of Public Instruction as well as from the tribal nations themselves. The texts can be found on the department’s website. These recounts will end at the establishment of the reservations. The articles are a much shorter version of the total history and should be used as a supplement, not a replacement, to the wide breadth of knowledge gathered by the department and historical society and passed down through tribal elders.

Feather regalia is seen during the Mandaree Hidatsa Powwow July 19 in Mandaree.