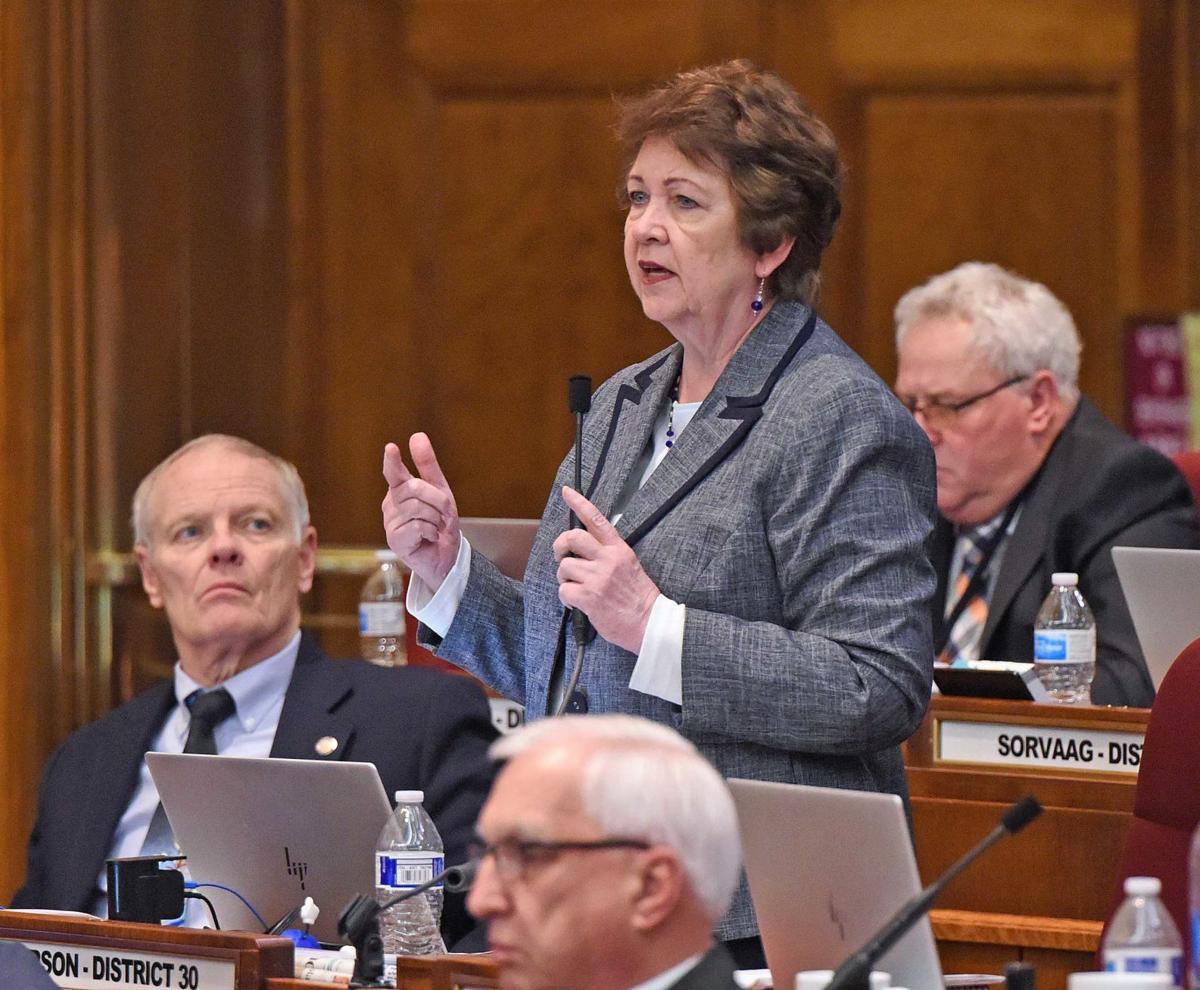 Sen. Diane Larson, R-Bismarck, speaks against a bill to legalize marijuana in North Dakota. The bill failed on a 10-37 vote Thursday after a lengthy Senate floor debate. Seated at left is Sen. Dave Oehlke, R-Devils Lake. 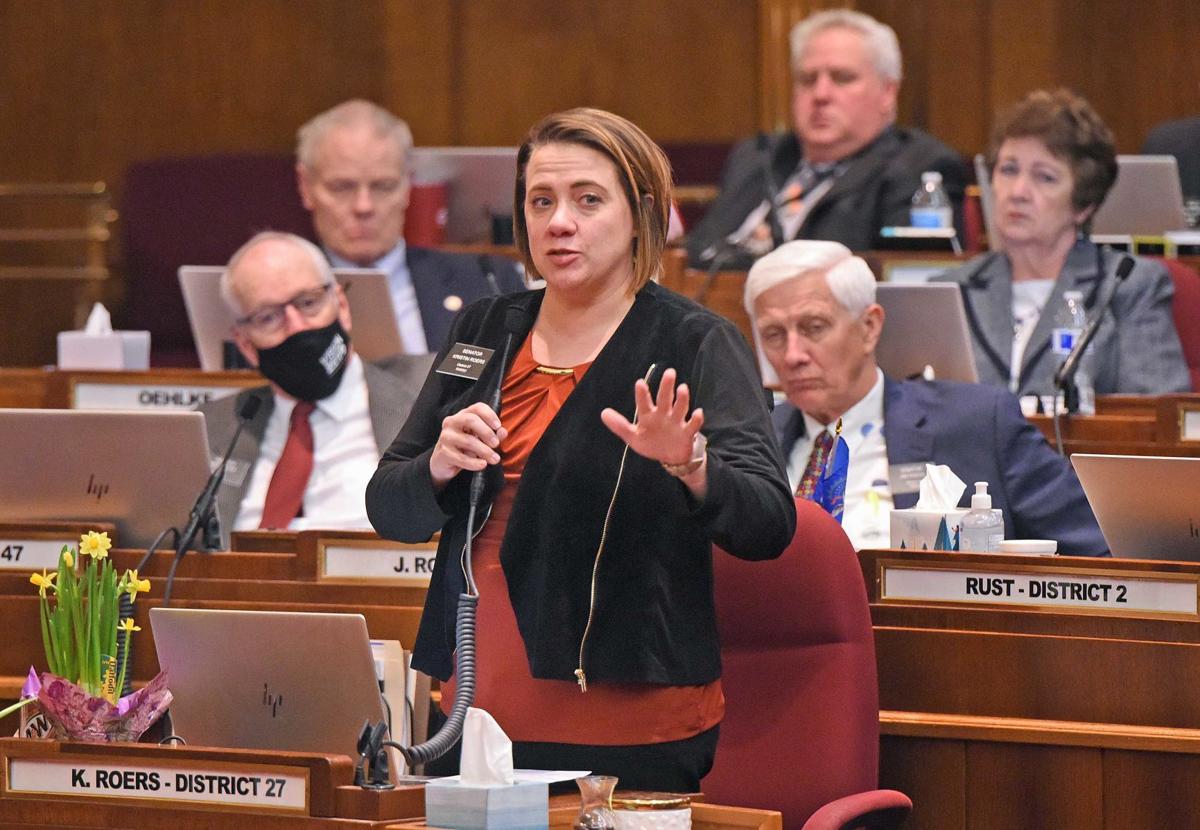 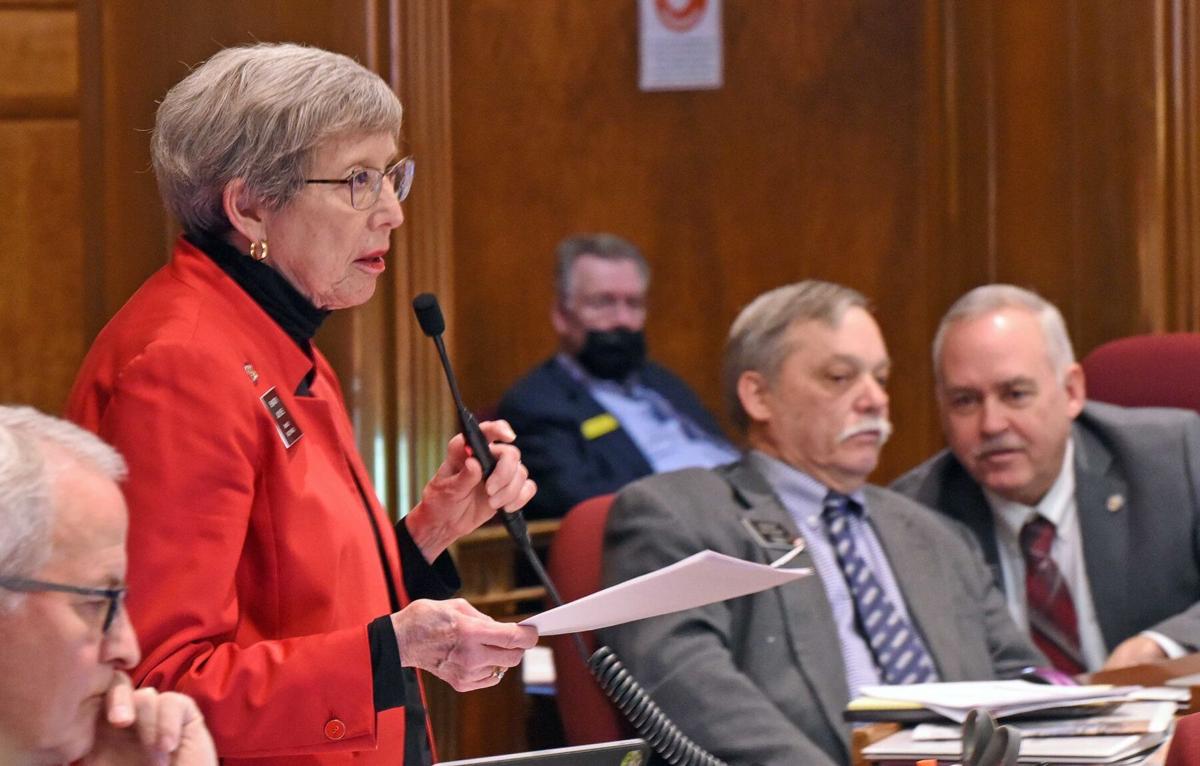 The Senate snuffed out House Bill 1420, brought by Rep. Jason Dockter, R-Bismarck, on a 10-37 vote after more than 30 minutes of debate.

Dockter brought the legalization bill to be "proactive" against citizen-initiated measures to legalize marijuana through the state constitution, as South Dakota voters did in 2020.

Constitutional measure backers already are proceeding with a 2022 effort. North Dakota voters in 2018 defeated a ballot measure to legalize recreational marijuana, with 59% opposed. Efforts to put the question on the ballot failed in 2020 due to the coronavirus pandemic inhibiting signature gathering. Marijuana remains federally illegal.

"Is it better to let it happen as it likely will eventually, or should we provide some guideposts which would contain its evolution?" said Sen. Judy Lee, R-West Fargo. "North Dakota is surrounded by three states and Canada who have opened up their marijuana laws, and being an island of resistance is probably unsustainable."

The bill mirrored much of the state's medical marijuana program, which the 2017 Legislature implemented after voters approved it in 2016. The bill also would have restricted recreational marijuana to people 21 and older, limited possession to 1 ounce, limited and tracked purchase amounts, limited use to private property and banned home growing.

The bill also would have limited the number of growers to seven and dispensaries to 18, all registered with the state.

North Dakota lawmakers get into the weeds of recreational marijuana

Sen. Diane Larson, R-Bismarck, a former police youth bureau worker, said "I think it's a wrong thing to do to pass something we don't like just so that we don't get something we hate."

House Bill 1501, brought by Rep. Craig Headland, R-Montpelier, which set a tax policy for recreational marijuana, passed the House 73-21. The Senate on Thursday defeated it unanimously without debate.

The Senate will soon vote on House Bill 1201, brought by Rep. Shannon Roers Jones, to decriminalize possession of small amounts of marijuana.

The House earlier passed the bill 58-36. The Senate Judiciary Committee gave the bill a 6-1 "do not pass" recommendation.

The Senate voted 25-22. The bill needed a two-thirds majority, or 32 votes, to pass. The House earlier had passed the bill 63-31. Opponents say children could mistake edibles for candy.

Voters in 2016 approved medical marijuana. The 2017 Legislature implemented the program. It has 4,977 active patient cards, with eight dispensaries operating in the state, including one in Bismarck. The state's first dispensary opened in Fargo in March 2019.

The bill would restructure the state's medical marijuana advisory board to include representation from manufacturing facilities, dispensaries and patients. The board has six members appointed by the governor, but no requirements for membership.

The bill goes to Gov. Doug Burgum, who has three legislative days to act upon receiving it.

How the Senate voted on recreational marijuana

A bill to decriminalize possession of small quantities of marijuana failed in the North Dakota Senate on Friday.

North Dakota's Senate could revive the question of legalizing recreational marijuana, but through a ballot measure put to voters -- one of pot…

Gov. Doug Burgum is accepting applications for North Dakota's Medical Marijuana Advisory Board after changes to the panel's membership by the …

Sen. Diane Larson, R-Bismarck, speaks against a bill to legalize marijuana in North Dakota. The bill failed on a 10-37 vote Thursday after a lengthy Senate floor debate. Seated at left is Sen. Dave Oehlke, R-Devils Lake.