It was early evening in April 1951 when Bill Shemorry, managing editor of the Williston Press-Graphic, got a call from his editor. North Dakota had just changed forever.

For months, the Amerada Petroleum Corp. had been looking for oil on Clarence Iverson’s wheat farm, near Tioga, finding mostly nothing. By one account, the well had produced about a pint of unpolluted oil by January — without drilling mud or water — but still hadn’t produced anything meaningful. Iverson’s son, Cliff, recalled in a 2008 Associated Press interview that his father was nonplussed at oil-hungry corporate men detonating dynamite on his farm.

But on April 4, Shemorry found himself getting into his car and, like a moth to a flame, making his way out to the huge flare now burning by North Dakota’s first fully operational, productive oil well — the first of thousands that would dot the western landscape and transform the state’s future.

“I came to the turnoff south of Tioga. A gravel road led to the well,” Shermorry recalled in “Mud, Sweat and Oil,” his 1991 book about the early oil days. Even when he was still 4 miles from the flare, it was so bright — like daytime, he wrote — that he’d thought at one point it must be just over the next hill. By the time he arrived, cars were parked everywhere, with hundreds turning out to see the flame.

Shemorry wanted to get closer. He sloshed into a pool of melted snow, wearing his “hip-boots,” and the roar of the flare and the bright light made him wonder if the entire contraption — bony steel framework soaring over the searing light — might explode.

“The light was so bright I didn’t worry about getting a good picture,” he later wrote. “I could easily read all the aperture and shutter settings on my 4x5 Speed Graphic.”

He took “about a dozen shots,” he recalled, and returned to his car as water started to run into his boots. He took off for Minot to get his pictures developed and ready for print, and one of the photographs he’d snapped began making its way around the world — from the Fargo Forum to Life to U.S. News and World Reports Magazine.

A few months later, Shemorry recalled, a Dallas oil speculator wanted his own version of the photo, on his own well a short ways north. Shemorry tried, but he couldn’t make the photo work in the dark. The flare — nowhere near the size of the flame Clarence Iverson’s farm — simply wasn’t bright enough. Nothing could compare to the awesome, terrifying cloud of fire he’d seen in April.

Missing by a mile

To say that oil has transformed North Dakota would be a hopeless understatement. It has, in a word, remade it — refashioning not only the fabric of state politics and finances but quite literally remaking its western reaches, bringing droves of people and construction.

This is the fourth story in a series produced by Forum News Service and the North Dakota Newspaper Association Education Foundation exploring the history of North Dakota. What shaped the moments we’re living today? And what does our history tell us about our future?

John P. Bluemle, former state geologist, remembered the early oil years in a 2001 pamphlet marking the 50th anniversary of that April night on Iverson’s farm. Natural gas was first discovered in 1892, stretching from Jamestown to Merricourt, and oil wells were drilled in earnest starting in the 1910s, but not much ever became of them. Bluemle notes that in 1915 one well was drilled in Ward County just a few miles away from where it might have been successful, and where an oil well would be placed decades later.

But in oil — as in a lot of things — missing by a mile was as good as missing by 20. Nothing would come of it. It was followed by years of searching that never struck a steady supply of economically viable oil.

It could also be a tumultuous time politically. A fight quickly broke out over the future of the state’s oil wealth in 1953, when the state Senate passed a massive hike in the oil production tax and drew a march on the state capitol led by the president of the Williston Board of City Commissioners. One subtext, Shemorry recalled in his book, was that eastern counties wanted — and would continue to want, for decades more — to “stick their finger in the pie.” Another was the oil industry’s opinion. 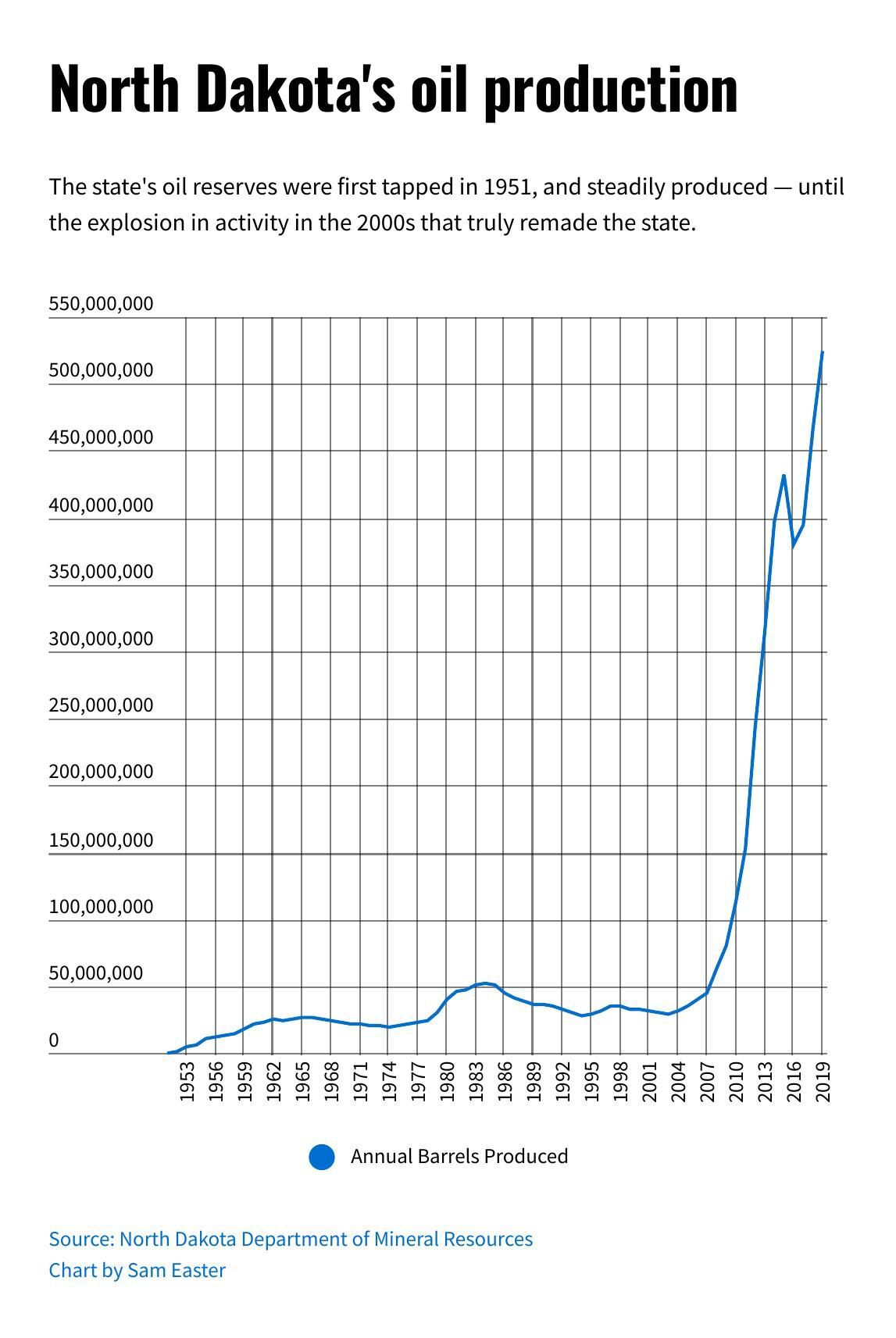 “It was pointed out that if this action caused even one wildcat well to be drilled in another state” Shemorry wrote, “North Dakota would stand to lose more than the increased revenue which the higher tax rate could bring in a year's time.”

The dawn of fracking

North Dakota’s relationship with oil unfolded over the next few decades in tandem with history and with the natural rhythm of oil drilling. Production would spike after discovery — like in 1951 — then taper off, surging again alongside global price or embargo or unrest. Bluemle pointed out that OPEC’s 1970s oil embargo was one of the most important events in Williston Basin’s oil history.

But when Bluemle wrote in 2001, he wasn’t sure what would come next. There was plenty of oil in North Dakota, but how to get to it was another question.

“Another possibility for new or renewed production is the Bakken Formation,” Bluemle wrote. “However, for that to happen, we’d need to see the development of a significant new technology.”

The solution, of course, was hydraulic fracturing, or “fracking,” which opened up the western half of North Dakota to enormous, renewed interest during the past 20 years. The Bakken region alone produced about 694,000 barrels of oil in 2000, according to state records; 86 million in 2010; and 186 million this year between January and May.

Drake McClelland is today’s mayor of Tioga, almost 70 years after oil was discovered on the Iverson farm. He doesn’t remember the excitement of the 1950s — just the press of people, from everywhere, coming to work the oil fields. People in tents, families living in cars and sending kids to school. A lot of people came, he said, “to make money quick.” 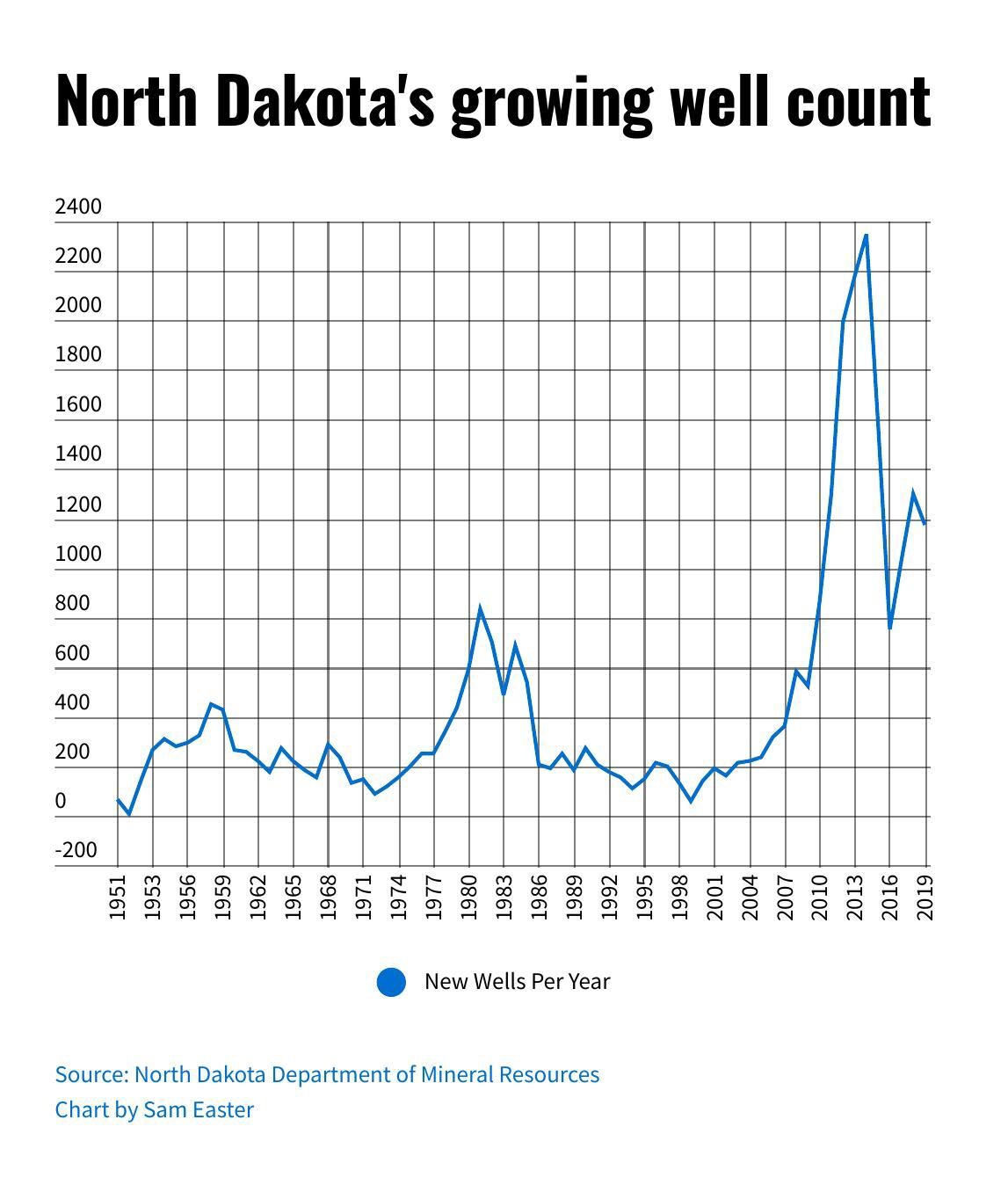 "The thing was, though — the boom came as fast as it went away,” he said. “And then when it did come back, a lot of the oil companies learned to slow down.”

But the oil has changed North Dakota forever. The state now depends on the oil revenues so much that one industry advocate’s site proudly announces that a massive portion of the state’s 2017 tax collections came from the oil and gas industry.

And the oil industry has donated handsomely to the state’s politicians. The energy industry is a leading source of political donations to North Dakota’s 2019 and 2020 political races, according to the National Institute for Money in Politics. The North Dakota Petroleum Council, in particular, has given $623,919 during the past 20 years to political campaigns as of early September. Nearly two-thirds of that money has gone to Republican candidates — the historically business-friendly, pro-petroleum party that has also made massive gains in North Dakota politics in recent decades.

The oil business, and the enormous prosperity it’s brought to the state, has helped entrench the GOP in power in North Dakota, said Mark Jendrysik, a UND political scientist. That’s not too surprising: In oil-heavy states like Texas or Alaska, the same kind of one-party rule prevails, he said.

“They certainly took credit for putting oil (wells) in the ground and having the foresight to be able to do that. They were able to spend money in a way that bought out opposition,” he said. And the sudden influx of oil money into state coffers, Jendrysik added — at least, during boom times — meant less infighting over the future of the budget.

But the arc of state politics is long. Jendrysik said that, eventually, it bends toward something like a Democratic-NPL resurgence.

"No matter what they do (in the short term), they're going to stay in power," Jendrysik said of the state Republican Party. "The unfortunate side to that, of course, it makes you sloppier. It makes the party complacent, because you think it's going to last forever." 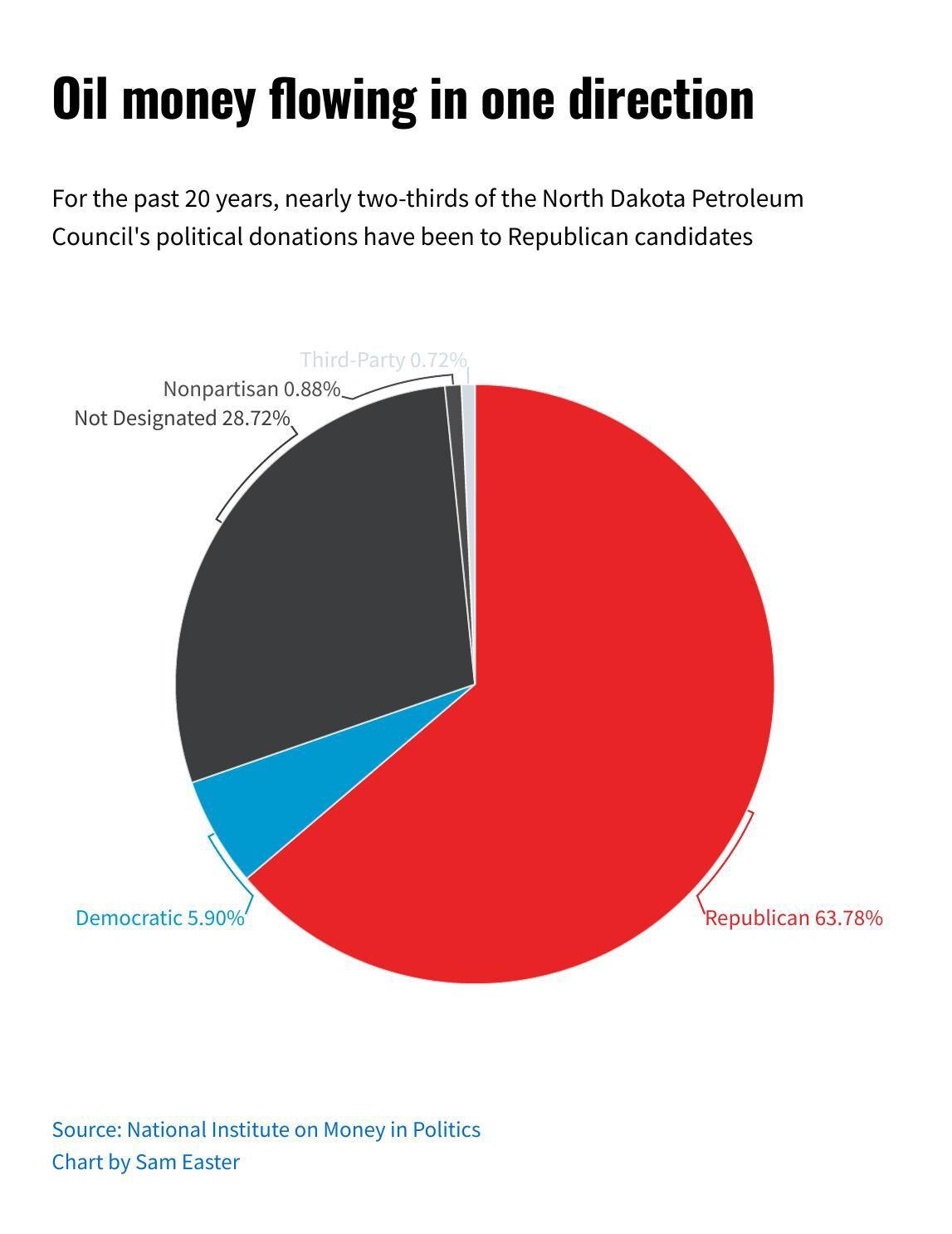 In the early 1900s, the state had a “live free or die” culture that encouraged self-reliance and independence from fiercely loyal political partisanship. Now, an overwhelming majority identify as Republicans. How did the electorate change from voting for a congressional delegation of Democrats?

This series, produced by Forum News Service and the North Dakota Newspaper Association Education Foundation, seeks to answer that question. North Dakota is a deep-red Republican state, but one with a state bank and a state mill and elevator — artifacts of a socialist past. It’s a land of sprawling farms, but increasingly tied to the petroleum industry. Its history runs through angry wheat farmers and Air Force bases and floods, nestled between mountains and Midwestern sensibilities.

North Dakota’s Constitution gives Gov. Doug Burgum the right to appoint someone to a state House seat won by a Republican candidate who died b…

North Dakota's first lady is inviting the public to submit ornaments that will hang on the North Dakota State Christmas Tree at the Capitol in Bismarck later this year. 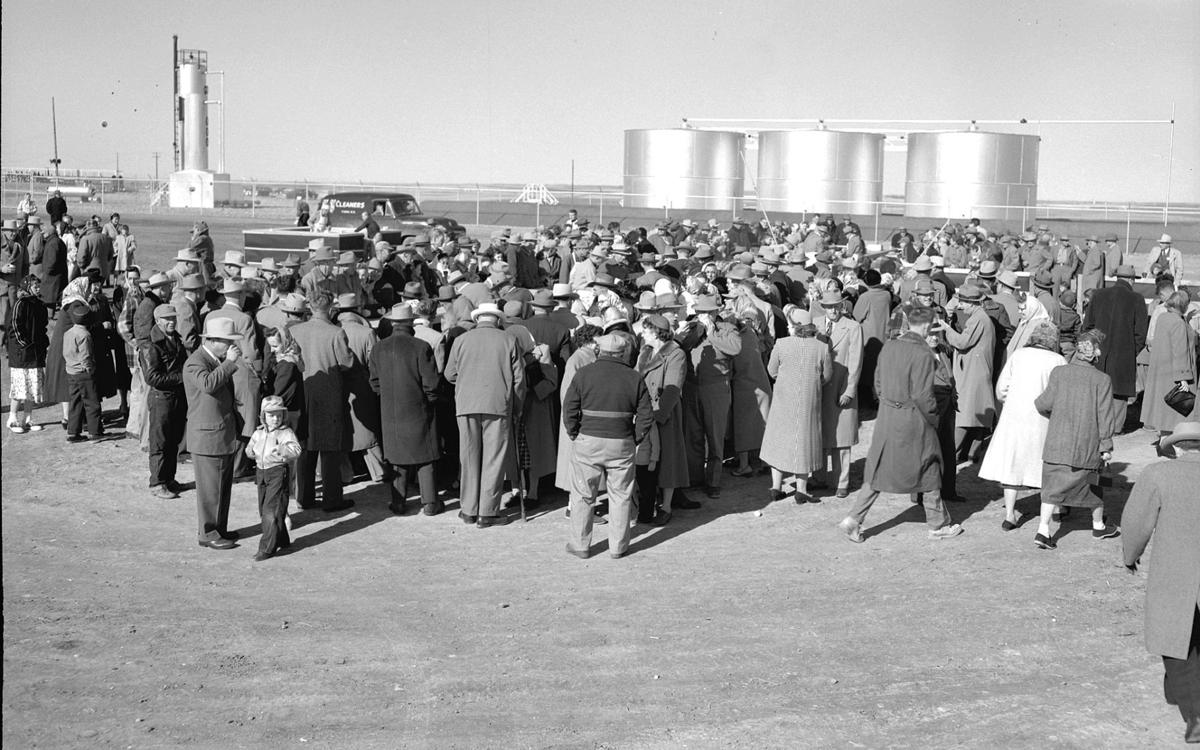 A crowd gathers for the dedication of a monument to the discovery of oil in North Dakota, set near the site of the oil well on Clarence Iverson’s Tioga-area farm. 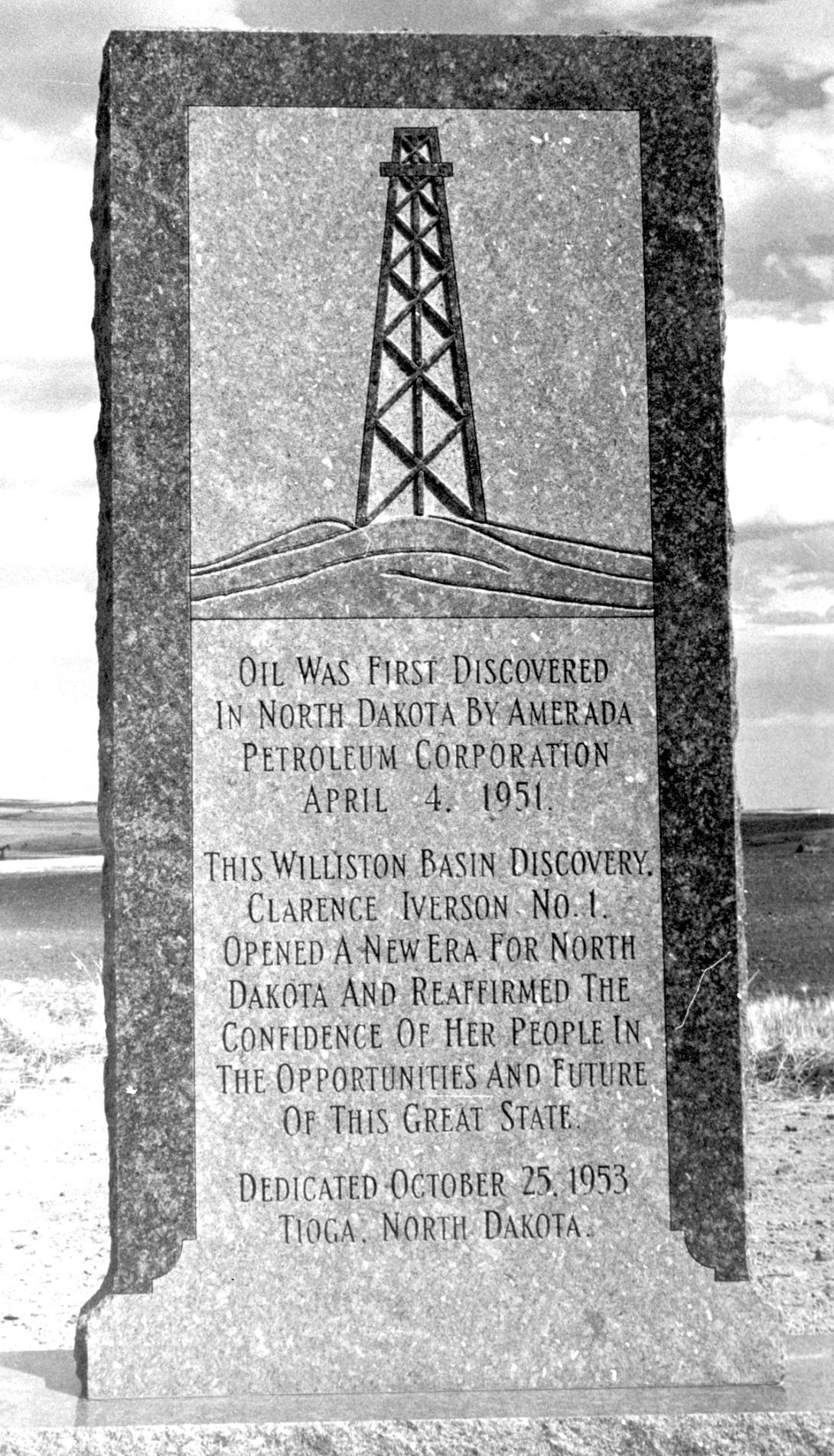 A monument to the discovery of oil in North Dakota was erected in October 1953 near the site of discovery on Clarence Iverson’s Tioga-area farm. 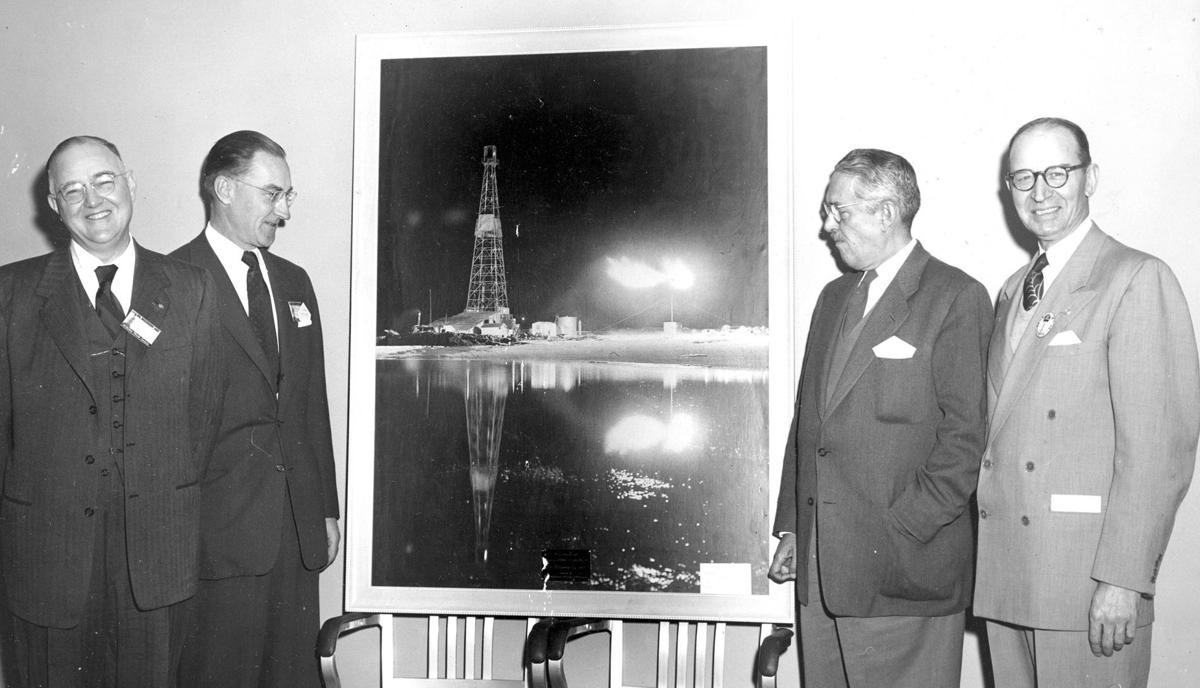 Executives with Amerada Petroleum pose with the famous photo, taken in 1951, of the site where economically viable oil was discovered in North Dakota. 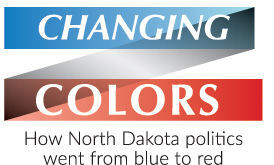