Two state agencies are set to receive some of the first money for North Dakota from the Federal Bipartisan Infrastructure Law passed last fall.

The governor-led, six-member Emergency Commission on Friday approved $2.5 million of increased spending authority for the Department of Mineral Resources for its abandoned oil well plugging program.

The panel also approved about $1 million for the Department of Environmental Quality to hire four temporary, full-time-equivalent employees to administer future funding for drinking water projects and to handle new federal requirements on lead and copper water lines.

The board's state House members objected to the original request for six temporary employees, seeing that discussion as more appropriate for the next legislative session in 2023. The panel pared the six employees to four for the agency's director to place where he deems best.

Both agencies need final approval from the Legislature's Budget Section, which is set to meet June 28.

Most state agencies are still applying for competitive grants or awaiting guidance on the $1.2 trillion infrastructure package, according to Office of Management and Budget Director Joe Morrissette.

The Legislative Council, lawmakers' nonpartisan fiscal and legal research agency, is monitoring the infrastructure package's implementation and when and how much North Dakota may receive, according to Legislative Budget Analyst & Auditor Allen Knudson.

An April memo outlines a preliminary estimate that North Dakota could have available to it more than $1.1 billion of potential new money from the bill over the next five years, in addition to $1.3 billion in reauthorized, regular funding to the state in that same time frame.

Mineral Resources' funding is part of a $25 million grant; $22.5 million will go into the Abandoned Oil and Gas Well Plugging and Site Restoration Fund, not needing commission approval because of a continuing appropriation already authorized by state law.

The $22.5 million will be used to fund contract work for well plugging and reclamation costs for the remaining wells, Morrissette said. The $2.5 million is to administer the program, he said.

North Dakota's program became a model for a $4.7 billion national effort covered by the federal infrastructure package, to address thousands of abandoned wells in other states, according to Mineral Resources Director Lynn Helms.

"It'll be a series of three to four grants that we'll be coming to talk to you about; this is the first," Helms told the panel.

Gov. Doug Burgum raised the issue of spending caps on the Emergency Commission, limits the 2021 Legislature imposed after gobs of federal coronavirus aid flowed through the six-person panel in 2020 with little input from state lawmakers.

The board can't approve in aggregate more than $50 million in federal funds or $20 million in special funds every two years without approval of the full Legislature.

The caps might complicate federal money set to flow to North Dakota in coming years, especially large sums, and potentially put at risk competitive grant opportunities, according to the governor.

"I'm sure that the intention was well meaning of somehow making sure that there was appropriate oversight on funds, but the ability to receive federal funds that are being distributed by the federal government is one thing that we probably shouldn't be handcuffing ourselves on, relative to other states," Burgum told the panel.

The board has 74% of its federal spending authority and 18% of its special funds authority remaining halfway through this budget cycle, according to Morrissette.

The governor also said he'd "like to see" that Morrissette as state budget director be allowed to approve minimal funding requests, such as $5,000 for the state School for the Blind that the Emergency Commission approved Friday.

That amount "shouldn't constitute the gathering of six elected officials," Burgum said. The board comprises the governor, secretary of state and four key lawmakers, who met Friday in person and by videoconference.

"We ought to let OMB just approve these kinds of changes if they're this small, and not have to have them come before the Emergency Commission," Burgum said, directing his comments as "an ask for change in authority going forward."

The Emergency Commission is set to see huge turnover after the November election, when there will be a new secretary of state and new legislative majority leaders and appropriations committee chairs. Burgum will continue to chair the panel. 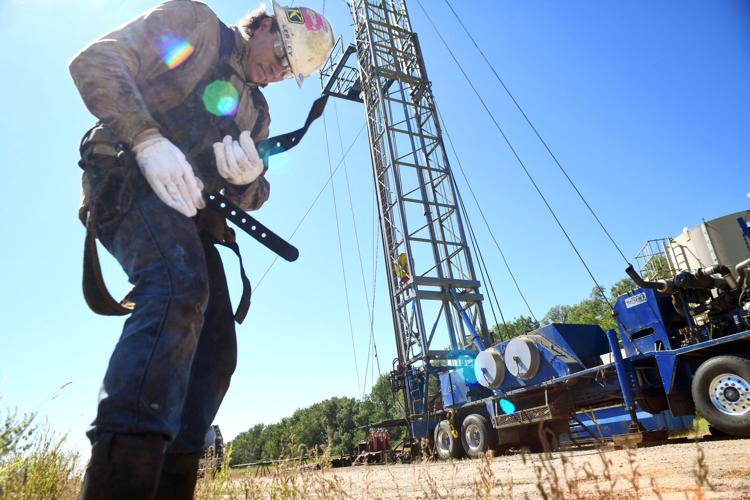 Dahlton Poitra, with Ham's Well Service, straps on his safety gear before scaling the workover rig in the background in August 2020 at an abandoned oil well site west of Antler in Bottineau County. The state of North Dakota used federal coronavirus relief aid to plug 400 nonproducing oil field wells and reclaim approximately 2,000 acres to farmland. 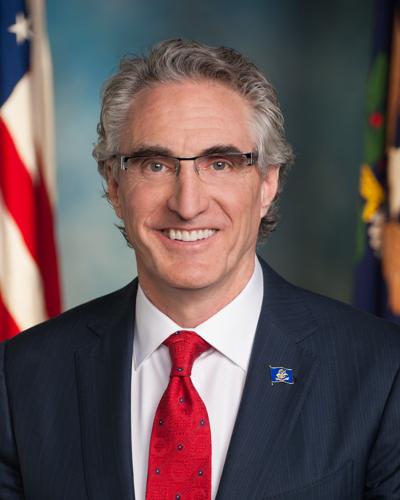 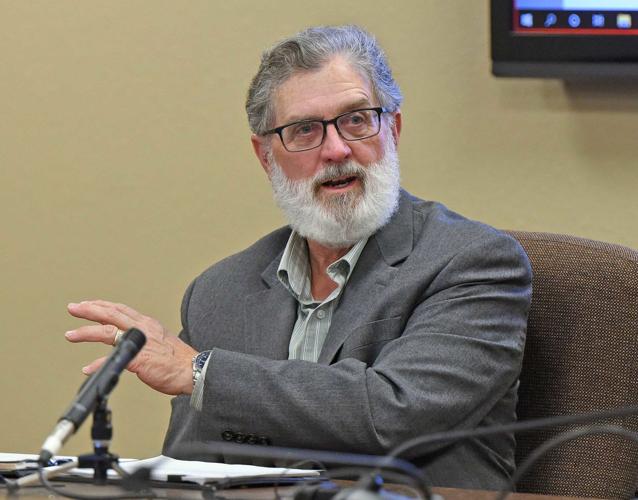