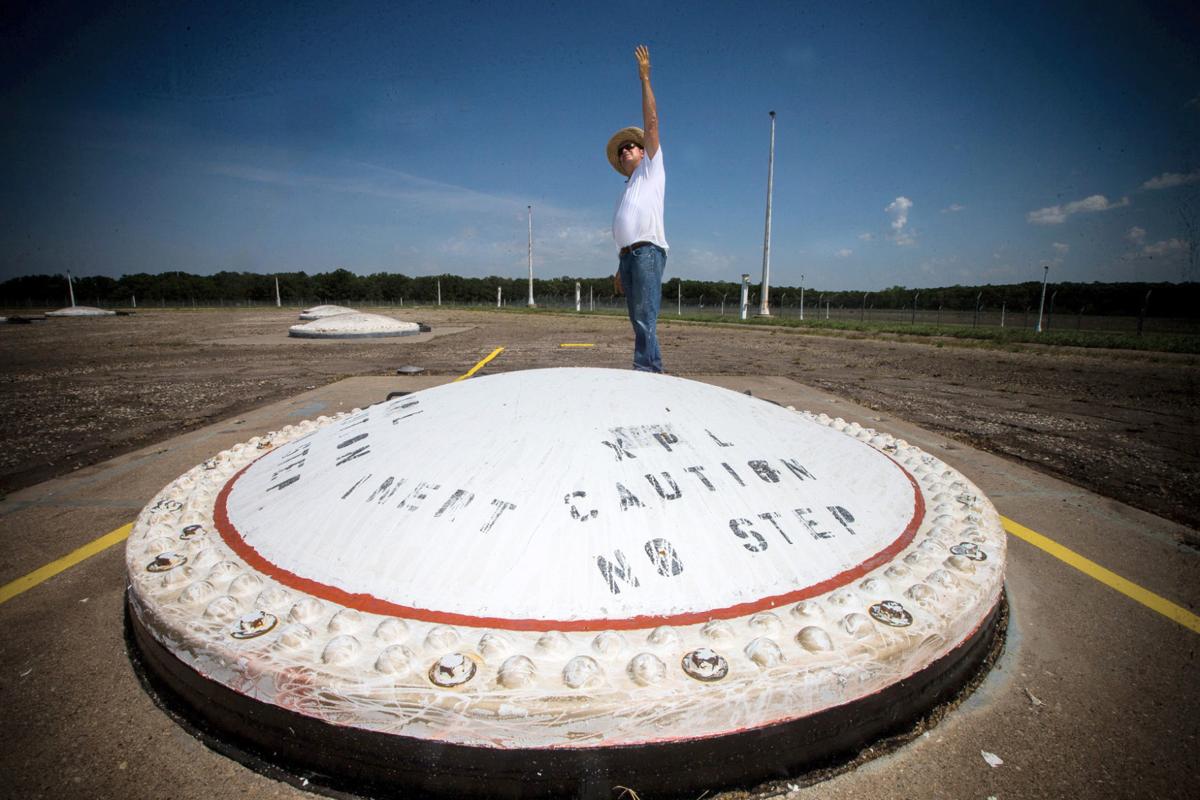 Mel Sann is leading tours at a former missile site near Cavalier, RSL#3, that was part of the Stanley Mickelson Safeguard Complex during the Cold War. 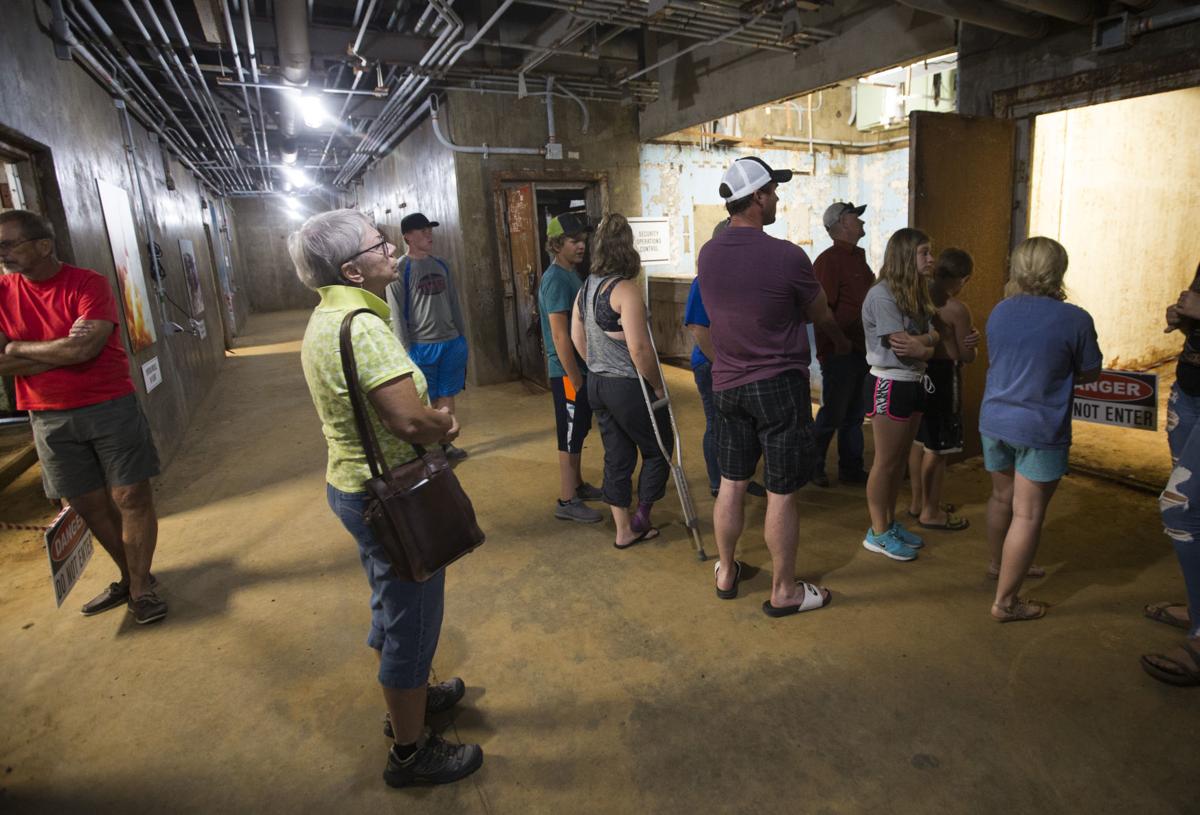 CAVALIER -- The owner of a historic nuclear missile bunker in Cavalier has big dreams for the site -- including a survival TV show, a bed and breakfast with a dance floor and an indestructible home for the end of the world.

He purchased the site during a 2013 government auction and has spent every summer since living there while working on repairs.

Sann said he wanted to build a bunker underneath his home for years. He latched onto the idea after serving in the military and vividly remembers Cold War tensions from his childhood.

Sann said building a bunker was too costly, so he began looking into government auctions of decommissioned military sites.

Sann tried to buy a communications bunker near his home in New York, but the deal fell through. Banks rarely finance the sites, and he said the bunker sold by the time he gathered enough money to buy it outright.

He found the North Dakota sites online and with his wife, drove 26 hours through an ice storm to Cavalier. Sann said icicles were frozen sideways off the RSL-3 fences because the wind was so intense.

Though his wife wasn’t, and still isn’t, sold on the idea of owning a nuclear bunker, the couple shelled out $64,050 cash after winning the auction.

Sann spends every summer at the site trying to bring the barren concrete buildings up to a liveable standard. He said nearly all of his five children have visited the site. His 16-year-old daughter, Savana, moved to the complex to guide tours this summer.

The Stanley R. Mickelsen Safeguard Complex was created during the 1970s and is a cluster of six military facilities designed to guard against a nuclear attack. The goal was to monitor for incoming Soviet threats and, if necessary, to launch missiles that would intercept incoming missiles.

The complex was operational for about 10 months and officially active for only a day before a treaty agreement called for its closure.

There were four RSL centers that held nuclear missiles designed to counter enemy warheads. Sann purchased one site and another was bought by James and Anna Cleveland.

The Clevelands renovated the RSL site into a home and are now trying to sell it for $1.25 million. They declined to be interviewed for this story.

Rob Branting, the site supervisor at the Ronald Reagan Minuteman Missile Site Museum in Cooperstown, said the other two RSL sites were likely purchased during the GSA auction, but may be abandoned now.

The main site, the Missile Site Radar, or MSR, was bought by a nearby Hutterite community during the auction for $530,000. A portion of the property was purchased last year by the Cavalier County Job Development Authority, consultant Carol Goodman said.

The JDA purchased about 40 percent of the land, including the tactical buildings, for $435,000 from a legislative appropriation. Goodman said the group is invested in the site because it has historical significance in the community. The JDA plans to create a “historical interpretation,” though Goodman said they are unsure about details.

Goodman said the MSR was in “horrendous condition” after being abandoned for decades. The base was filled with about 34 million gallons of water, and the missile silos were filled with lead-tainted water.

Sann holds his own conspiracy beliefs that contradict factual evidence about recent events. He said he thinks most school shootings are staged by “crisis actors” and set up by the government to promote an anti-gun agenda. He said he also questions the legitimacy of 9/11 and global warming.

Much of Sann’s conspiracy beliefs come from his heavy involvement with gun rights.

Sann started protesting for the Second Amendment around 2014 when New York’s SAFE Act went into effect. The law was championed by Gov. Andrew Cuomo and intended to tighten gun regulations to prevent mass shootings. Sann said he felt his right to bear arms was being threatened.

He showed up at numerous rallies dressed in colonial-era garb with a white powdered wig, long blue jacket and black boots. Sometimes he’d have ammunition draped around his shoulders. At the rallies, Sann was usually seen spanking a larger-than-life effigy of Cuomo with a fake wooden rifle.

Sann has a pending lawsuit against the New York Police Department for taking away the fake weapon -- he said they violated his constitutional right to express his views.

Sann is a self-declared “truther” and visited Newtown, Conn., after the Sandy Hook school shooting to protest for gun rights. He said he doesn’t believe the shooting was real and instead thinks it was set up by the government to restrict gun rights. He said the victims were “crisis actors,” a phrase that has been claimed by far-right conspiracy groups in response to mass shootings. The claims are unfounded.

Although he said he would like to someday live in the bunker, Sann said he’s not a “doomsday prepper.”

“When you get labeled -- I don’t like being labeled liberal, conservative, nothing. I am an American and I stand for freedom,” Sann said. “They put a slant and an angle on it as a category -- the reality is we’re here to survive and reproduce. Some people don’t have the foresight to say, ‘You know what? It probably wouldn’t hurt to have five, six months of food on hand.’”

“Preppers” are known for stockpiling basic necessities and often ammunition because they believe a catastrophic event will alter life as we know it. The Southern Poverty Law Center said the culture “represents a dark worldview that combines, to varying degrees, end-times apocalyptic views, an obsession with firearms (and other weaponry), conspiracy theories and too often an anti-government sentiment.”

Sann said bunkers have been one of his longest-standing interests because he grew up during the Cold War and felt the fear of a nuclear attack.

He said he worries about an unsteady future for many reasons -- from weather and natural disasters to escalating international tensions and nuclear threats.

Branting, of the Cooperstown site, said there’s sometimes interest in turning the sites into homes or for agricultural use, although some sites have limitations on what can be changed to preserve the history. He said it’s not common for the sites to actually become habitable, however, because of the high renovation costs.

Bunkers created from decommissioned military bases can be found for sale throughout the country. Rich Stebbins, a spokesperson for the GSA, said a missile site is currently for sale in Wyoming.

A private company is renovating 150 Minuteman Missiles in South Dakota into luxury end-of-the-world shelters built to house up to 10,000 people.

Vivos’ spokeswoman, Barbi Grossman said the first phase of the shelters is nearly sold out. She said members are not “‘preppers nor the ‘elite 1 percent’ ” and interest “has skyrocketed over the past few years, due to the onslaught of threats that are now very evident to the entire world.”

Sann opened the bunker as a tourist attraction this summer to earn money for renovations. He said he wants the public to be educated about history and also begin to think about the future.

Sann applied for the site to become a nationally recognized historic monument and hopes it will become North Dakota’s eighth national landmark by next summer. The bunker is already recognized as a state historic landmark.

Sann’s daughter Savana describes her dad as a successful entrepreneur. He has several product patents, once ran a day care and now her parents breed standard poodles.

“Everything he does is successful,” she said.

Sann said he’s a dreamer. He wants to potentially host a survival TV show there with families competing in challenges to win spots in the bunker. He said maybe he’d like to turn the bunker into a bed and breakfast with a dance club.

Sann said plans are far from complete because it all comes down to money -- renovations are costly.

No matter what he ends up doing, he wants people to learn about the past so they can think about the future.

“I was thinking about how can I help people become more aware that they’re unprepared,” he said.

Storm could drop several inches of snow on Bismarck-Mandan

The fall snowstorm bearing down on North Dakota is forecast to drop several inches of snow on the Bismarck-Mandan area by Friday.

Mel Sann is leading tours at a former missile site near Cavalier, RSL#3, that was part of the Stanley Mickelson Safeguard Complex during the Cold War.